Interrupting Trump’s strut is only a start: Journalists shouldn't normalize the GOP candidate

Can we now get serious, journalists, about what’s at stake in American politics? 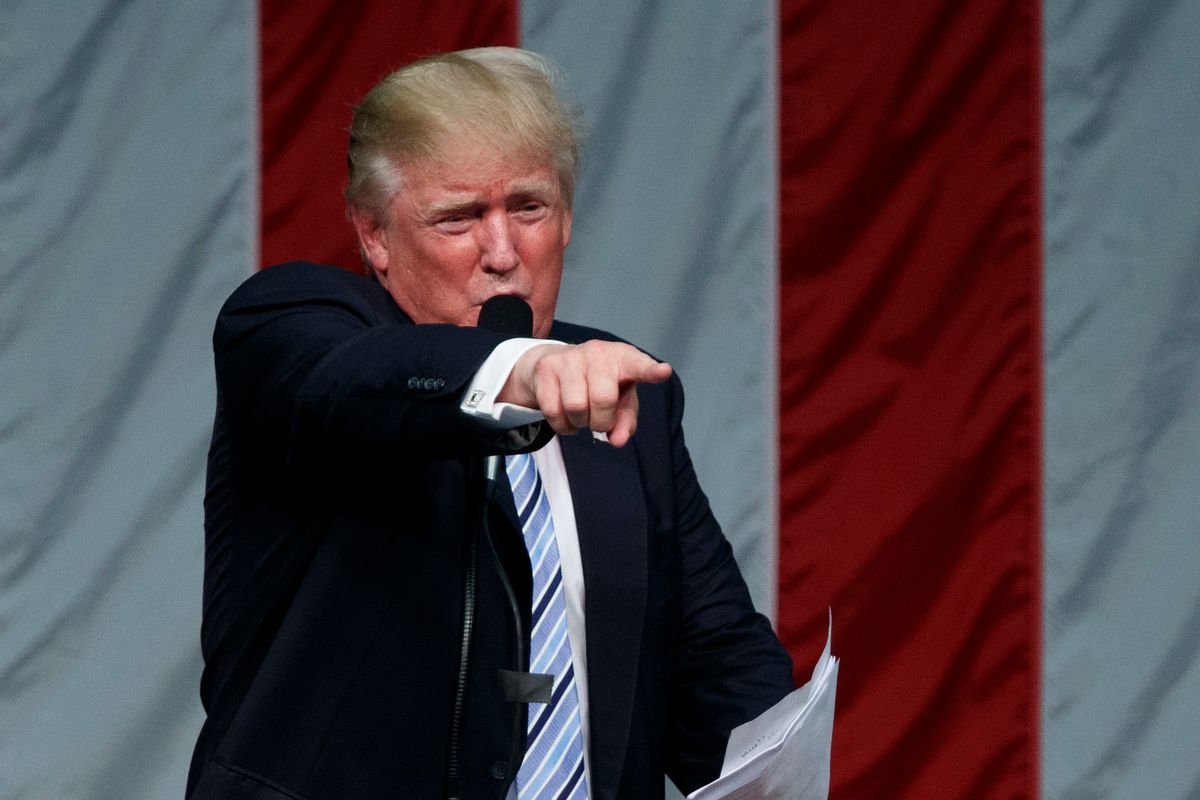 Donald Trump is not strutting so well these days, so he’s resorted to the last recourses of a man who knows in his spleen — of his heart, if there is one, I cannot speak — that he’s a loser. Consider:

1) He’s all in, trashing the media, as in his recent declaration:“I’m not running against Crooked Hillary, I’m running against the crooked media.” His presumption — an excellent word for him — is that if only he were only left alone to rant unopposed and unquestioned, to gobble up the American mediascape as he did during much of the primary campaign, he would be on his way to a coronation. In his mind there can be no other explanation for his plummeting prospects — not his grotesque insults, not his all-purpose assaults on people he disapproves of, not his ridiculous political program, not his nonstop fabrications. No, from this point of view, the problem is the media “filter,” as George W. Bush called it in 2003, and it’s not a friendly one. This has been a recurrent theme on the right, starting with Barry Goldwater in 1964 and continuing through the polysyllabic whines of Richard Nixon and Spiro T. Agnew, as scripted for them by the PR man William Safire, who was rewarded for his labors with a guaranteed space in The New York Times.

2) Trump is declaring, in advance, that the election will be rigged. This is a very expensive insurance policy that he’s taking out, for it guarantees that his unreconciled legions will feel justified, after Nov. 8, in taking whatever steps they deem necessary to obstruct the operations of a White House that is not only crooked, in their terms, but illegitimate. This is an unprecedented charge. It is the prologue to insurrection. You can be sure that some of Trump’s beloved “Second Amendment folks” will be paying attention.

Now, there was surely a decent case to be made in 2000 that the Bush presidency was illegitimate — having been installed, as the Florida vote recount was stopped dead, by a Republican Supreme Court. Bush was not entitled to the presidency. But the Democrats were into playing nice guys then, and so George Bush was inaugurated, with dreadful consequences that ought to have been — and still ought to be — evident to anyone paying attention.

As the Trump camp is roiled by dissension, a good many Republicans in his circle having lately discovered — Shocked! Shocked! — that the standard-bearer they signed on with was the actual Donald Trump, the unbridled bully, liar, rabble-rouser they now scramble to disown or, more chicken-heartedly, “distance themselves from,” was not a meteor who streaked in from outer space but the home-grown heir of decades of economic fantasy and white-supremacy dog whistling that they have made their brand.

Many journalists are now, at last, rising to the occasion to call Trump’s falsehoods falsehoods and his insults racist, to note that they are not incidental or specific gaffes but built-in features of his standard operating procedure. CNN’s Jake Tapper has been exemplary on this score, most recently bluntly telling Trump’s campaign manager, Paul Manafort, that statements he makes are “not true.” Trump serves up more fodder with every passing week. So let us tender due congratulations that more journalists are doing their jobs, pointing out that the emperor is not only naked but bonkers.

But let’s not stop with the congratulations.

Political journalists have yet to face their complicity in normalizing much of the garbage that Trump has packaged into pellets in this campaign. The normalization of which I speak is not new. For years, respectable media treated climate-change-deniers as legitimate dissenters, with lazy point-counterpoint coverage that gave the voices of a few flat-earthers equal weight with a vast scientific consensus. For years, they have left unquestioned a conservative (now metamorphosed by media groupthink into “centrist”) uproar about the magnitude of American taxes. But for now, let me emphasize only one component of conventional wisdom: hysteria about budget deficits, a conservative bugaboo since Ronald Reagan (in fact, since the days of Herbert Hoover, as demonstrated by the historian Kim Phillips-Fein, but that’s a subject for another time). In recent years, the poster boy for “responsible” budgeteering has been the choirboyish Paul Ryan, feebly carrying the flag for true conservatism even as he dare not detach himself from the loathsome Trump.

Ryan & Co. only seem respectable because their false premises go unexamined, starting with the crackpot, easily falsifiable claim that the United States is crushed by a tax burden second to none in the wealthy world, and supplemented by the corollaries that trickle-down economics works, that there is something non-idiotic about the existence of a “Laffer curve,” that American business suffers from excessive regulation, and that raising wages would impede growth.

American politics has been imprisoned in fiscal fantasy for decades now.

As for the Ryan budget, which was greeted by many journalists as a return to conservative sobriety, The Atlantic’s Derek Thompson has summarized it quite handily:

If you cut spending on the poor to the bone and radically change the U.S. government’s promises to help needy people pay for health care, it is remarkably easy to balance the budget.

It’s only if you think that the national debt has risen to paralyzing proportions, and that therefore balancing the budget is imperative, that you would give a second glance to the likes of the Ryan budget.

American politics has been imprisoned in fiscal fantasy for decades now, so much so that Bill Clinton felt it necessary to proclaim that “the era of big government” was “over.” Now that both Hillary Clinton and Donald Trump are promoting significant infrastructure building, which cannot conceivably happen without public spending and public employment, the actual political prospects for spending that money depend on whether Americans understand that we can afford to do it.

Whether they understand that depends, in some measure, on whether the decades-long hammerlock of the budget fetish can be broken.

I await a question to the candidates during their forthcoming “debates” that challenges this absurd nonsense.