Retreating into the bubble: Donald Trump turns his campaign over to Breitbart

Frustrated by a failing campaign, Donald Trump is withdrawing deeper into his chief propagandists' fantasy world 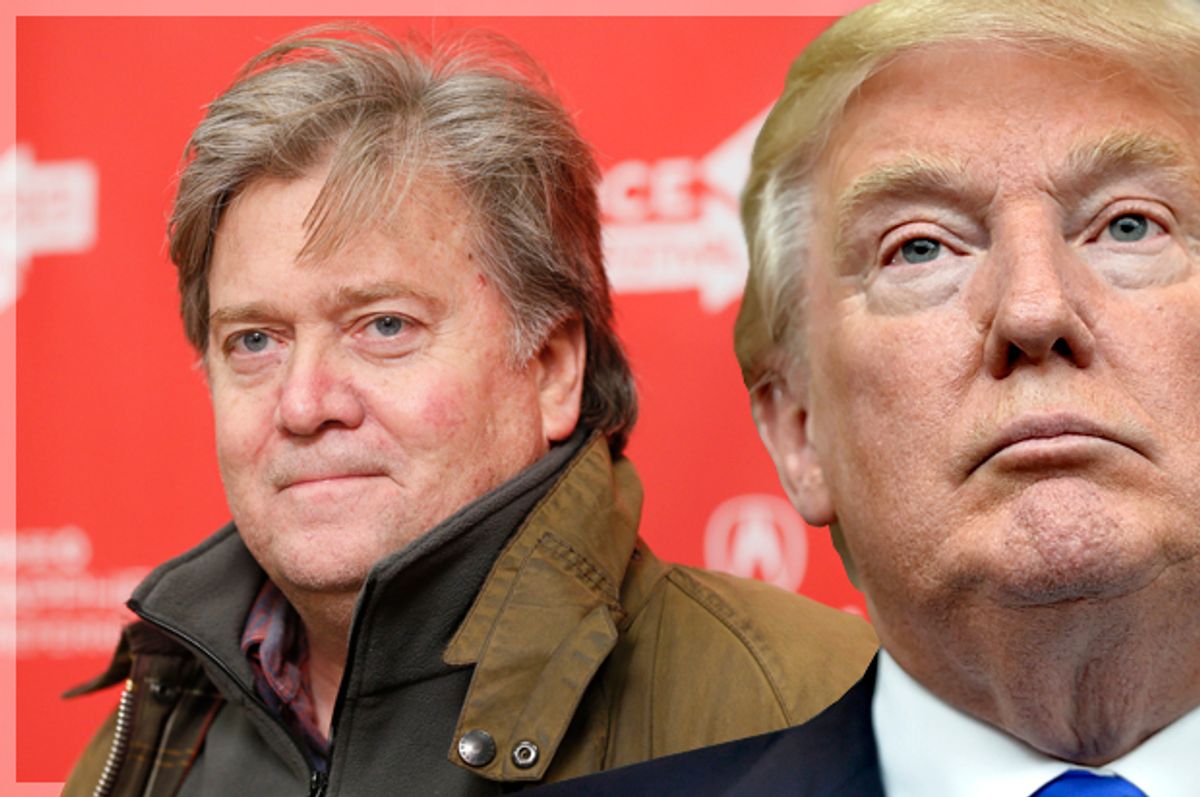 For the second time since June, Republican presidential nominee Donald Trump has reshuffled his campaign leadership team. Corey Lewandowski, the first man to helm the Trump campaign, was fired in June after losing a power struggle with campaign chairman Paul Manafort, who took over the day-to-day operations. And now Manafort is apparently on the outs, too — not because of mounting evidence of his intimate involvement with the massively corrupt former regime in Ukraine but because he had been trying to force Trump to act a bit more polished on the campaign trail and stop picking fights with people who aren’t Hillary Clinton. He’s been supplanted in his leadership role by pollster Kellyanne Conway and Breitbart News’ executive chairman, Stephen Bannon.

Just to reiterate that last point: One of the top executives of a conservative media outlet has taken control of the Republican presidential nominee’s campaign. And this follows (disputed) reports that the ousted chairman of Fox News, Roger Ailes, is also offering advice to Trump. It’s no longer an issue of a Republican campaign moving in sync with conservative media: They’re merging into a single entity. And this is not just any conservative media outlet but Breitbart News, the right’s premier destination for explicit racial grievance, poorly argued conspiracy theories and (more recently) a virulent strain of white nationalism.

Anyone who’s been following Breitbart’s coverage of the 2016 campaign knows the organization has functioned as a de facto communications arm of the Trump campaign. For every lunatic statement of Trump, every wild falsehood, there’s a Breitbart News article earnestly vouching for its accuracy and political deftness. Breitbart’s obeisance to Trump is total: After Corey Lewandowski (while still on Trump’s payroll) physically assaulted Breitbart News reporter Michelle Fields and then accused her of lying about the incident, Breitbart News instructed staffers to not defend Fields and instead published a piece defending Lewandowski and undermining Fields’ version of events. (Fields and several other staffers resigned in protest, and video footage later proved Fields was right.)

Trump’s seizure of the Republican nomination has precipitated Breitbart’s embrace of an absurd form of anti-journalism that frequently parrots in tone and style the propaganda arms of authoritarian regimes. Just prior to the Republican primary in Wisconsin’s 1st congressional district, which saw House Speaker Paul Ryan go up against a (Breitbart-backed) far-right challenger, Breitbart News’ Washington political editor wrote a piece arguing that Ryan “has been brought to his knees, bowing down before the almighty nationalist populist movement.” (Ryan defeated his opponent by nearly 70 percentage points.) Another Breitbart reporter wrote admiringly of Fox News’ Sean Hannity for defending Trump and standing with “the Populist Nationalist Champions of the New and Better Republican Party Borne [sic] in Cleveland That Will Reign Supreme For Years To Come.”

Given that Bannon’s organization is already fully invested in Trump’s mythology, his transition to working for the campaign isn’t all that surprising. It’s the ultimate expression in echo-chamber politics: Trump was frustrated by the reality of a cratering presidential campaign, and his response is to withdraw deeper into the alternate universe that Bannon and crew have been fabricating in which a “nationalist populist” wave is poised to lift Trump to power.

As one would expect from a person who helms a news organization that participated in a politically motivated gaslighting operation against one of its staffers, Bannon has no scruples and no inclination to let accuracy or propriety get in the way of ambition. And he has a special obsession with the Clintons —with Bill Clinton’s past sexual exploits in particular. “There’s a whole generation of people who love the news but were 7 or 8 years old when [Bill Clinton’s affair with Monica Lewinsky] happened and have no earthly idea about the Clinton sex stuff,” Bannon told Bloomberg’s Joshua Green last year. Now that he’s in charge of a campaign tasked with denying Hillary Clinton the presidency, it seems likely that the Trump strategy will involve dredging the swamps of Clinton-scandal lore.

And Breitbart News will be right there, ready to amplify and “corroborate” every outlandish accusation the Bannon-led Trump campaign can think up.