It’s not the economy, stupid! How Trump succeeds by saying what many voters think 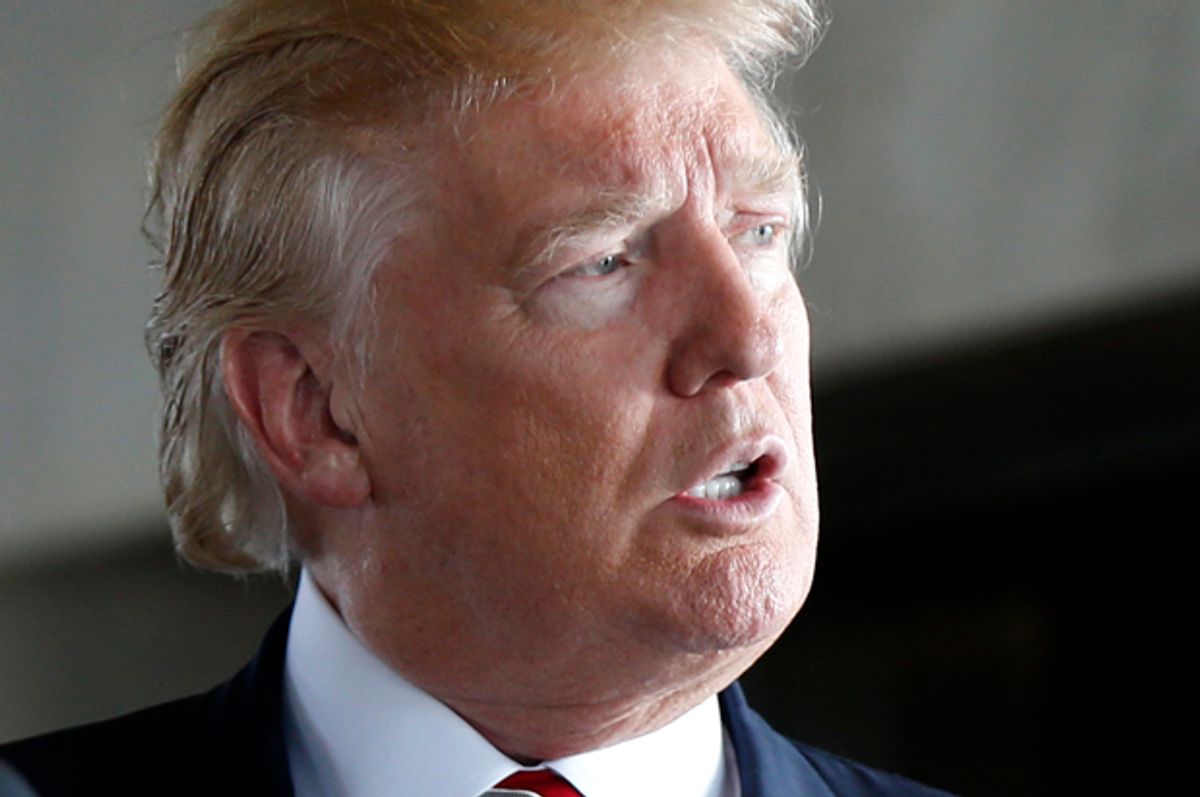 One of the things you can’t help but notice is that in this time of great economic despair, Donald Trump isn’t running on how he will improve the economy. He barely mentions it, his silly economic speech last week notwithstanding. In truth, he isn’t running on the issues at all, unless you think building a wall or torturing terrorists are issues. In this most peculiar of campaigns, he is running instead against the force that he seems to think really threatens America and that really has Americans lathered: political correctness.

When you get past all the bloviation, Trump’s really big promise is that he will loosen Americans’ tongues, just as he has loosened his own. That is what he means when he says, “I am your voice” — not that he will represent the working class in the halls of power, but that he will express their hostility against social etiquette. As Conor Friedersdorf of The Atlantic noted after examining comments of Trump supporters explaining why they liked him, “political correctness loomed large in those accounts.”

Even so, you don’t hear much about PC in the political coverage of the election except when Trump is attacking it. One of his big applause lines is, “I’m so tired of this political correctness crap.” And there is a good reason why the media don’t like talking about this, even though Trump has been, in Nicholas Kristof’s words, “mainstreaming hate,” and even though Trump’s anti-PC scourge may be one of the lasting effects of the campaign. The reason is that the media have been anti-PC too. Now that Trump has tossed etiquette aside, they seem to be having second thoughts about what an anti-PC society looks like. Here’s the problem: It looks like Trump.

Given all the grave problems that beset us, political correctness would seem to be a rather slender one. That is the media’s assessment, too. Just about every political analyst and just about every political survey concurs that this election pits disaffected older working-class white males, largely without college degrees, against a cohort of the young, women, minorities and college-educated whites — a sort of “last gasp” election of a declining group against a bundle of ascendant ones.

Why are blue-collar whites angry? The media have an answer for that, too — essentially that these folks have been the primary casualties of globalization and immigration, Trump’s twin bugaboos. But a recent paper by Gallup senior economist Johnathan Rothwell challenges this assumption. From Rothwell’s data, those who view Trump most favorably were not particularly battered by globalization or immigration. In fact, they were surprisingly well-off financially — better off than those who supported Trump’s Republican rivals. Maybe that is why Trump hasn’t really talked much about his economic plan. He knows it doesn’t matter much to his base.

What Rothwell discovered is that those who view Trump favorably are racially isolated as well as isolated from immigrants. Their grievances aren’t so much economic or even sociological as psychological. These older whites are a group in despair — shrouded by a cloud of pessimism, loss and disempowerment, as Rothwell describes the nationalist tide in other countries similar to the one that is now bearing Trump.

And they are angry about it — even hateful about it. You don’t hear a lot in the media about the non-economic subtext of this anger because that would require reporters to criticize ordinary Americans, not just Trump — though Trump can be hateful precisely because so many of his supporters are hateful, whether you think that hate is warranted or not. It is, however, just to reiterate the point, not warranted by financial difficulties. These folks are angry about their condition in the society, about a lack of hopefulness in the future. They want scapegoats. And they want the liberty to scald those scapegoats with impunity.

Until Trump, no candidate in the past 50 years would risk being politically incorrect, much less basing a campaign on political incorrectness. It was easier for politicians to use euphemisms than to come right out and voice racist or sexist or nativist sentiments. That wasn’t a matter of bowing to PC or even of the media policing heated rhetoric. It was just being civil and well-mannered. So how did Trump manage to rip the civility off our discourse?

The answer may be that PC is a proxy issue. You may say that what riles you is having to conform to certain restrictions of speech. You may say that it is a matter of freedom of expression. But let’s face it. That makes PC itself a euphemism. For a whole lot of people, PC is, after years of having to hold their tongues about how they really feel about blacks and Hispanics and women and Jews and, lately, Muslims, a proxy for being allowed to vent their prejudices. As Brookings scholar William Galston told the The Washington Post, “What we’re learning is that a lot of people have been biting their lips, but not changing their minds.” That is what many Trump supporters declare they love about him: his incorrigibility. PC was a dike holding back latent hostility. Now Trump has broken the dike.

The media have had a difficult time reporting this, not only because, as I said, they don’t want to attack Trump’s supporters, or because the idea of PC is unpopular, or because to identify anti-PC as possibly the primary force behind Trump’s campaign would be having to admit some awful things about America itself. It is because they have been attacking PC themselves for decades.

This isn’t the place to rehash the history of PC or to discuss its excesses, which are real, but PC is one place the liberal and conservative media joined forces. The liberal media focused on the way PC was curbing free speech in academe and forcing potentially challenging ideas into a new, doctrinaire mold. (New York magazine, The New York Review of Books and The New Republic, to name just three, all ran anti-PC articles in the early '90s.) For the conservative media, it wasn’t about academe. It was about American culture generally. If supporters of PC saw it as form of sensitivity to the vulnerable, conservatives saw it as another way of promoting the liberal agenda by being kind to the vulnerable. Conservatism thrives on the rhetoric of cruelty. PC threatened to pull conservatism’s fangs.

It is, perhaps, a testament to the power of shame or to the residual decency of many, if not most Americans, or to an ability of people to distinguish between free speech and hate speech, that despite the attacks on PC, especially the broad, unrelenting ones by the right wing, most people are still “politically correct” — if by that you mean not openly bigoted. And in the face of Trump, some in the liberal media have even had to walk back their criticism of PC. One example is a piece published last July in The New York Times Magazine by Amanda Hess, aptly titled “How Political Correctness Went from Punchline to Panic.” Hess identifies the danger of Trump’s political incorrectness to the social fabric. She describes how Trump framed it “as a kind of fifth-column tendency, an actual danger to America” by pretending that terrorism is, in part, a product of not reviling Muslims in our language, or that illegal immigration is a product of not verbally reviling Mexicans. This allowed his supporters to step away from seeming to be racist by seeming to be patriotic instead.

But then comes a turn in her essay. Hess sees anti-PC as a proxy for a “dark aspect of white American psychology,” yet she levels her own criticism, accusing PC practitioners of indulging in “pedantic forms of language scolding on Twitter” and coming across “as coastal Ivy League whites trying to absolve themselves of privilege by wielding it against poorer, less worldly and less educated white people.” This strikes me as condescension wrapped in condescension. Translated it seems to mean that PC can be elitist toward people who don’t know any better than to verbally hurt others.

If this sounds contorted, it is because the media don’t know how to negotiate between PC, which they fear, and Trump, who hates it. Some journalists even go so far as to say that PC created the Trump phenomenon, which may not be too far from the truth.

If this election really comes down to a choice between saying whatever is on your mind and exercising some restraint, one can only hope Trump loses. Now, after having facilitated the anti-PC forces, most of the media hope so, too.