#LochteGate explained: Everything we know about U.S. Olympic swimmers alleged robbery, so far

As Brazilian police acquire more CCTV footage, the mystery as to what actually happened that night deepens 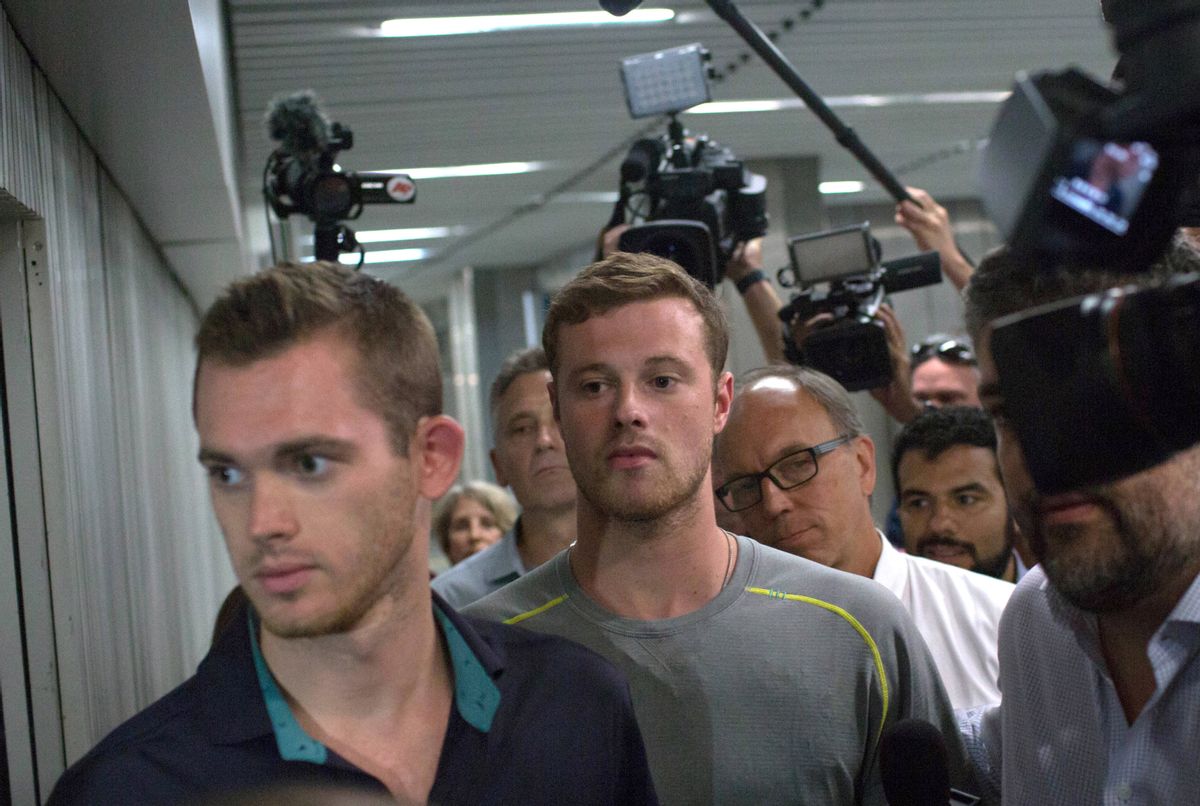 Journalists surround American Olympic swimmers Gunnar Bentz, left, and Jack Conger, center, as they leave the police station at Rio International airport early Thursday Aug. 18, 2016. The two were taken off their flight from Brazil to the U.S. on Wednesday by local authorities amid an investigation into a reported robbery targeting Ryan Lochte and his teammates. According to their lawyer they will not be allowed to leave Brazil until they provide testimony about the robbery. (AP Photo/Mauro Pimentel) (AP)
--

That four members of the United States swim team were involved in an incident early Sunday morning is indisputable — but what actually happened, and who it happened to, is a matter of debate. On Wednesday, Brazilian authorities made it clear that they did not believe the story that Ryan Lochte, Jimmy Feigen, Jack Conger, and Gunnar Bentz had reported about having been robbed at gunpoint by men claiming to be police.

Early Sunday afternoon, USA Today reported that it had spoken to Lochte's mother, Ileana, who confirmed that her son and the three other athletes had been robbed. "[The robbers] just took their wallets and basically that was it," she said.

"Then the guy pulled out his gun," Lochte said. "He cocked it, put it to my forehead and he said, 'Get down!' and I put my hands up, I was like, 'Whatever.' He took our money, he took my wallet. He left my cell phone, he left my credentials."

However, Mark Adams, the spokesman for the International Olympic Committee, called the account "absolutely not true." Later that afternoon, he retracted that statement, claiming that he had been misinformed by the United States Olympic Committee as to what happened. As it turned out, he had not been misinformed — as Lochte later told Matt Lauer, the four never reported the incident to the USOC "because we were afraid we'd get into trouble."

On Sunday, all four spoke with Brazilian Civil Police, who told the Associated Press that Lochte and Feigen had been unable to corroborate the basic details of their stories, both claiming to have been too intoxicated to remember specifics. However, on Wednesday Lochte suddenly remembered a number of details that contradicted his own story, telling NBC on Wednesday that the taxi had not been pulled over, but that they were robbed at a gas station, and that while a gun was pointed at him, it was not pointed at his forehead.

This minor shift in his story is significant because on Thursday, Brazilian police told ABC News that "one of the swimmers was seen on CCTV footage breaking down the door to the bathroom at the gas station and fighting with a security guard." Lochte and Feigen both told police that they left Club France at 4 a.m. and arrived back at the Olympic village 30 to 40 minutes later.

CCTV footage from the club reportedly shows them leaving at 5:50 a.m. and returning at 7 a.m. According to Brazilian Judge Keyla Blanc de Cnop, "you can see the supposed victims arriving without signs of being physically or psychologically shaken, even joking amongst themselves." Investigators have not been able to locate the taxi the swimmers allegedly hailed, nor have they corroborated the account yet with other evidence.

It is these discrepancies which sent Brazilian authorities to the Olympic village to seize the foursome's passports, but by that time Lochte had already left the country, and Conger and Bentz were sitting on a plane attempting to do likewise when they were detained Wednesday by Brazilian authorities. Feigen was still in Brazil, and has agreed to cooperate with authorities. Lawyers for all three athletes say that they will not be allowed to leave Brazil until formally speaking to authorities.

This post will be updated as the story develops.

UPDATE #1: Speaking under the condition of anonymity, a Brazilian police official with knowledge of the investigation told the Associated Press that authorities believe Lochte lied about being robbed at gunpoint. Conger and Bentz, the two swimmers who were pulled off their flight on Wednesday, allegedly admitted that the story had been fabricated.

UPDATE #2: In a news conference, Civil Police Chief Fernando Veloso said that "no robbery was committed against these athletes. They were not victims of the crimes they claimed."

UPDATE #3: The Associated Press reported that Lochte and Feigen could be facing charges for falsely reporting a crime. However, Lochte's lawyer, Jeffrey Owens, told ABC News that "I am not aware of the federal police recommending charges for filing a false report. I am not surprised to hear it though. They've gone this far and have failed to acknowledge that the robbery actually took place, so that would be the natural next step. A gun was pointed at the swimmers and they were forced to get out of their cab and give up their money. No matter what happened at the gas station, the swimmers were robbed by people with a gun appearing to be law enforcement. No matter what country you are in that is robbery and robbery is a serious crime."

UPDATE #4: Lochte issued the following apology on Friday, in which he claimed that he misunderstood the situation: