A DoS tweet about unexploded remnants in Vietnam, Cambodia and Laos recalls the millions of bombs the U.S. dropped 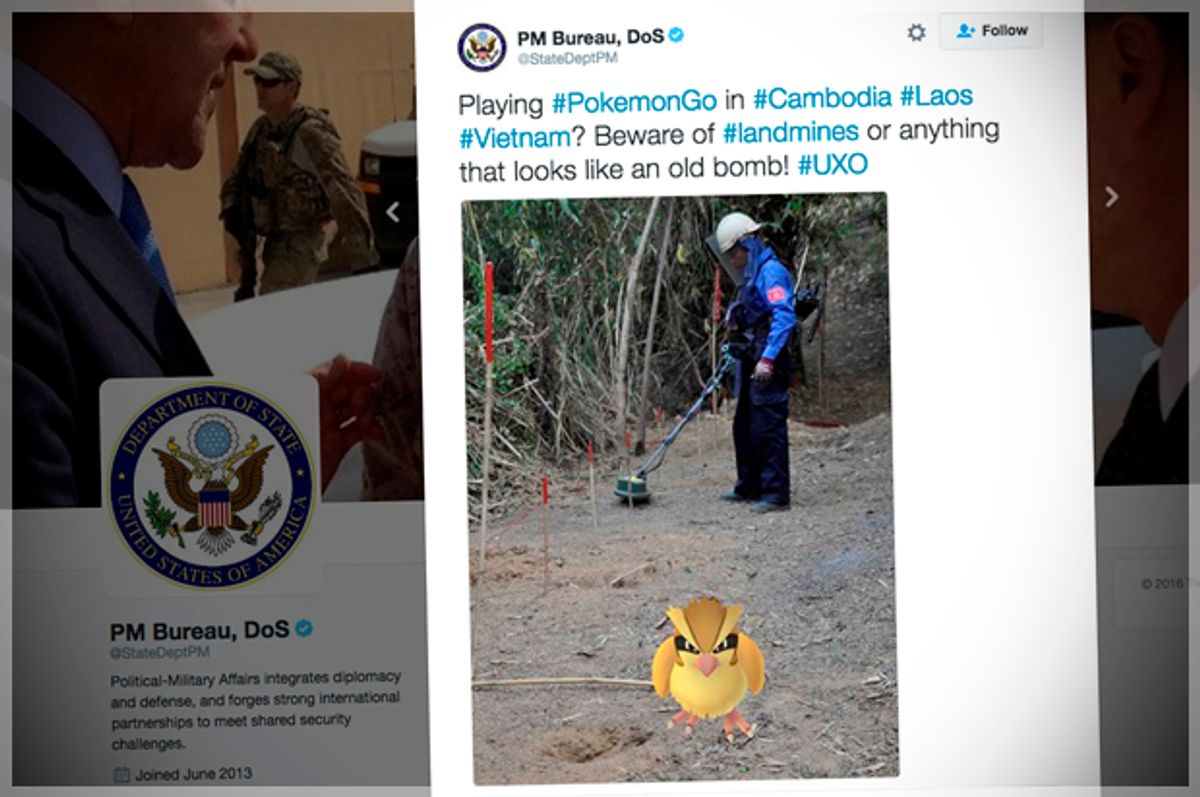 The official Twitter account of the U.S. State Department's Bureau of Political-Military Affairs sparked backlash this week with a tweet about bombs left over from past American wars which references the popular new video game Pokémon Go.

It tweeted a photo of a person in a safety suit clearing up unexploded ordnance, with the text, "Playing Pokémon Go in Cambodia, Laos, Vietnam? Beware of landmines or anything that looks like an old bomb!"

Some people found the tweet tasteless. Greg Grandin, a historian at New York University who specializes in the Vietnam War and the secret U.S. bombing of Laos and Cambodia, told Salon he found it to be "another example of the memory hole when it comes to reckoning with the consequences of U.S. intervention."

"Tens of thousands of people have lost their lives in Laos and Cambodia since the Vietnam war ended, as a result of the unexploded bombs the U.S. illegally dropped on those countries," Grandin explained.

"And here, a spokesman for the State Department is making a silly joke about it, treating the unexplored ordnance as if they were part of nature, like puddles left behind by a rainstorm," he added.

The State Department itself, however, stressed to Salon that the tweet was misinterpreted and was not meant as a joke. "We take this responsibility to own up to our historical legacy very seriously," Bureau of Political-Military Affairs spokesperson David McKeeby said.

"The real scandal here is the fact that we have to tweet Pokémon characters to get anyone’s attention about it!" he added.

In the '60s and '70s, the U.S. military dropped hundreds of millions of bombs on Laos, Vietnam and Cambodia.

In a secret CIA operation to destroy North Vietnamese supply routes and kill local communist militants, from 1964 to 1973, the U.S. dropped more than 270 million bombs on the tiny country of Laos.

In nearly 600,000 bombing missions, the U.S. dropped the "equivalent of a planeload of bombs every eight minutes for nine years, or a ton of bombs for every person in the country — more than what American planes unloaded on Germany and Japan combined during World War II," Mother Jones noted.

Some of these bombs were cluster munitions, which are now widely banned (although the U.S. is not party to the international treaty banning them). From 1965 to 1975, the U.S. dropped at least 456,365 cluster bombs on Vietnam, Laos and Cambodia.

One-third of the bombs dropped by the U.S. did not explode. This unexploded ordnance, or UXO, kills 500 civilians per year, on average — many of whom are children and farmers.

Laos, which has a population of just 7 million, "has suffered more than half of the confirmed cluster munitions casualties in the world," according to the organization Legacies of War.

Given the horrors of the Vietnam war, the State Department tweet sparked backlash.

"Why are there landmines there?" wrote one. Another joked, "Ask Henry Kissinger to clean them up," referencing the former secretary of state who oversaw the American war effort in Southeast Asia — and what critics say were extreme war crimes.

"Pretty funny that impoverished civilians still die and are maimed by landmines 50 years after the war," wrote one user. "Very good joke."

Another noted that a lot of the unexplored bombs were "dropped by the Americans, blighting the lives of villagers for decades after the horror of the war."

The State Department replied, acknowledging that this is true, but added that it has worked with Cambodia, Laos and Vietnam since the 1990s "to clear our wartime UXO."

This wasn't the only tweet, however. The Bureau of Political-Military Affairs wrote another Pokémon Go tweet two weeks earler, making light of unexploded ordnance clearance efforts in the former Yugoslavia.

Salon reached out to the Bureau of Political-Military Affairs with a request for comment.

In response, State Department spokesperson David McKeeby explained that the earlier tweet, published on Aug. 1, is a photo of activities in Bosnia and Herzegovina. Many unexploded remnants are left over from NATO-backed wars in former Yugoslavia.

McKeeby said the Pokémon Go tweets were part of "a series of Twitter postings we’ve done this month to help draw attention to the dangers of landmines and unexploded ordnance around the world."

Another tweet links to the announcement of a partnership between the U.S. and Vietnam, on the 40th anniversary of the end of the war, to "clear unexploded ordnance and provide support to those who have been injured by them" [sic].

"This work clearly takes on added significance" in Southeast Asia, McKeeby conceded, "given that unlike many of the countries where we operate conventional weapons destruction programs, we are dealing primarily with U.S. origin munitions."

He noted that President Obama plans to visit Laos in September, and efforts to clear UXO are among the items on his agenda.

"We’ve got a long way to go in 'cleaning up our brass,' as my friends across the river at DoD would say," McKeeby added. "We remain committed to supporting this work in years ahead, which is made possible by both broad bipartisan support from Congress and the generous support of the American people."

According to "To Walk the Earth in Safety," an annual State Department report, most conventional weapons destruction funding from 1993 to 2014 went to Afghanistan — where the U.S. has been at war since 2001, and where it backed extremist rebels in a war against the Soviet Union in the 1980s.

The second-largest recipient is Iraq, which the U.S. backed in its war with Iran in the 1980s, bombed heavily during in the Gulf War of 1991 and invaded in 2003.

Next on the list are, respectively, Angola, Cambodia, Bosnia and Herzegovina, Laos and Vietnam.

NATO began air intervention in the war in Bosnia in 1993. In 1995, it launched a bombing campaign known as Operation Deliberate Force.

In 1999, NATO carried out a much longer war in the former Yugoslavia, killing hundreds of civilians and dropping cluster bombs on civilian areas. Many of these cluster munitions were left over after the war, and Yugoslavia was partitioned into multiple nation-states.

A 1999 Human Rights Watch report condemned NATO's use of cluster bombs in Yugoslavia, which it noted are highly indiscriminate weapons.

Conceding U.S. involvement in such bombings, McKeeby defended the U.S. role in helping clear UXO. Since 1993, he said, the U.S. has spent $2.6 billion on efforts in more than 95 countries "to reduce the harmful worldwide effects of at-risk, illicitly trafficked and indiscriminately used conventional weapons of war."

McKeeby also said the majority of the unexploded ordnance the U.S. helps to clear was not originally left by American military forces.

He added, "Then again, once unexploded remnants ‎of war are on the ground, regardless of origin, it prevents families from safely returning home, humanitarian aid from being delivered, kids from getting back to school, farmers from working their fields, goods getting to market — and ultimately [prevents] post-war countries from rebuilding and recovering."