Natalie Portman talks to Salon about her directorial debut: "I felt lucky to make the film in Israel because being a female director there isn’t unusual" 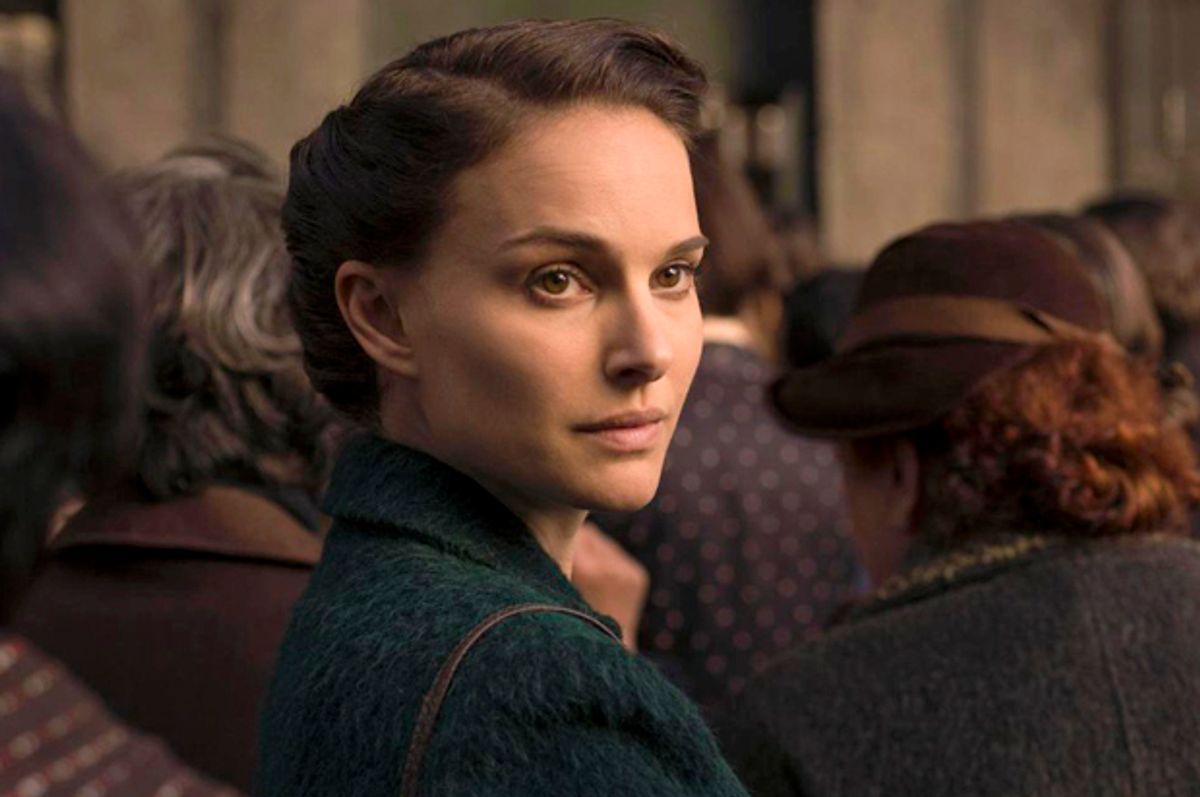 Natalie Portman in "A Tale of Love and Darkness" (Focus Features)
--

Natalie Portman has had a remarkable career ever since she impressed critics and viewers with her performance as a 12-year-old assassin in “Léon: The Professional.” As a teenager, she was marvelous in both “Beautiful Girls” and “Anywhere But Here,” films too few people saw.

Sure, Portman made some blockbusters — a pair of “Star Wars” and “Thor” films — as well as indie darlings such as “Garden State,” where she played a manic pixie dream girl. But she earned some serious cred (and an Oscar nomination) with the film “Closer” and delivered a strong performance in the ambitious action thriller “V for Vendetta.” She even made a rom-com with Ashton Kutcher (“No Strings Attached”) to show that she’s not always so serious.

Her versatility may be why visionary director Wong Kar-Wai cast her in his luscious film “My Blueberry Nights” and why she appeared in Terence Malick’s recent “Knight of Cups.”

Now the Oscar-winning actress of “Black Swan” has changed up her career again, making an auspicious feature-film directorial debut with “A Tale of Love and Darkness.” Portman also penned the screenplay, adapting Israeli writer Amos Oz’s autobiographical novel. In the film, Portman plays Fania Oz, who has escaped from Poland. She and her husband, Arieh (Gilad Kahana), are living in 1945 Jerusalem with their young son, Amos (Amir Tessler). The film, which is in Hebrew, alternates between past and present, telling the stories of both mother and son, mixing truth with dreams and fantasy.

Portman exhibits a distinctive visual style in “A Tale of Love and Darkness,” shooting a scene from under a table or bathing a flashback in blue light to create mood and atmosphere. A shot of birds filling the screen and rendering darkness is also effective as a visual motif within the narrative.

In bringing the novel to the screen, Portman has made an accomplished, provocative film about weighty themes — love and kindness but also the demons that haunt people. There are also many of Oz’s thoughtful observations about life and humanity that resonate.

The actress-filmmaker met with Salon to discuss “A Tale of Love and Darkness.”

What struck me most about your film is the beautiful storytelling. You create both a realistic world and a fantasy-dream world that convey so much about the characters. Can you talk about how you conceived the film’s narrative?

Storytelling is so central; it is how the characters are creating their identities — both their imagined world and their existing world. They are being informed by their stories. It was important for me to have the fantasy, the dreams and the stories look differently than the reality, which is very bleak in comparison with this richly imagined, romantic storytelling. The film captures the romantic melancholy that Oz writes — that his mother inhabited — and how [one’s] view of the world can be devastating when reality doesn’t match the dream.

Yes, it’s very multilayered. You get the emotion from how the two worlds compliment, contrast and create each other.

In Judaism, language creates reality. “Let there be light” is spoken, and then it happened. That was important for me to create; these are a people who have created themselves through storytelling and through words and language. At the beginning of the film, you hear them telling a story before you see an image. That was important to me because it is very much within this tradition — to create the world through language.

What was it about Amos Oz’s novel that made you want to adapt it?

It was really moving to see the creation and development of a writer through this fascination with his mother's story, and having to tell her story — because his father is not telling him her story. In [Amos’] telling it, he becomes a writer. Part of that — I think he probably would have been a writer no matter what — accelerates the process. He has to tell his mother’s story.

Also, it’s such a wild moment in history because the Hebrew language was revived in this moment. All of a sudden, there is this biblical language that hasn’t been spoken in thousands of years, except in religious contexts. And they are using it to say very common things and having to update it. What an amazing time to be a writer! You could literally invent a word and it would enter the lexicon.

Oz talks about how his uncle was one of the modernizers of the Hebrew language. He was part of the academy. He came up with the word for “shirt.” If he didn’t come up with the word for shirt, we’d still be saying, “I put on a coat of many colors.” You were stuck with biblical vocabulary until someone updated it. How do you say “frustration” or “pencil” or “car”?

They are still updating it to accommodate “hashtag.” You are taking a language that hasn’t been spoken in so long.

There are often biases against actors who want to direct. Do you feel you had to work harder to prove yourself as a director, especially since you chose to shoot a film in Israel and in Hebrew? The degree of difficulty here is pretty high!

I definitely piled up the challenges but not in any conscious way. It was the story I cared about telling and I was passionate about telling it. That led everything. I felt lucky to make the film in Israel because being a female director there isn’t unusual. Because men and women serve in the military, men are used to having female officers and commanders, and there is no issue with being a female in charge.

That’s an interesting observation! Israel has some great female directors, like the late Ronit Elkabetz [“Gett”]. So yes, you’re probably right that Israeli society doesn’t have the gender bias to the degree America does.

I haven’t been a director in America, so I don’t know what it is [like] here, but I imagine — and I’ve heard from women, too — that it is harder here.

You were born in Israel and have been very vocal about being pro-Israel. The scene about the creation of the Jewish nation is a pivotal scene in the film. Can you talk about this sequence and its importance to you?

It’s one of those moments in history where everyone who was alive at the time remembers every detail and everything that happened. All of the sudden, this group of refugees who ran away to this desert were granted the right — for the first time after centuries of persecution — to have their own rule and to defend themselves. It was a life or death moment for people and a feeling of some purpose after so much suffering.

That tension of that moment — Oz describes it in his book as “they were screaming as if they sounded like all of the dead who ever died were screaming out together.” It's just a totally emotional moment. All of the anguish of the Second World War for Jews — coming out of it and having a rebirth — the moment is so complicated. It was emotional to stage it and have people feel like they were living it.

Can you talk about the decisions you made in how you created the “look” of the film?

It was really lucky to work with Sławomir Idziak, my cinematographer, who is really a legend. He did Kieslowski's "Blue" and “The Double Life of Veronique,” as well as "Black Hawk Down" and one of the "Harry Potter" movies. When he started doing tests in Jerusalem — and it was his first time in Jerusalem — he said the city didn't look bleak at all. It looks totally rosy and romantic, and that’s not what we were going for. So he used a green filter, which was really wonderful because it drained the walls of the city, which is made of the same color of stone. It made the walls look much more washed out and bleaker.

There are many great lines in the film, one of the best being “No one knows anything about anyone. It’s better to live without knowing anything than to live in error.” How do you, as a writer, adapt such a rich work and capture the voice of the author but also make it your own?

The book was so rich. You have so many beautiful things that you have to figure out how to squeeze them in. Some of the process is determining what is the arc of the characters and what are they going through? Which ideas, poetic words and ideas can we put into actual scenes? Are these things that people can actually say to each other in conversation or are they in voice-over reveals? Or is it just not possible, and they should they stay in the book and be appreciated in the book? It was a process to go through.

That piece about not knowing others is so moving because I think there is this childhood fantasy of marriage and soulmate and all of that. Of course, it is incredible when you find someone, but ultimately you never know another human being. As [Fania] says, you never know yourself fully. We surprise ourselves with some of the things we do. How could we possibly know another person? There is this “surprise of loneliness.”

Your character, Fania, suffers. She hits herself, which her son copies later; she has headaches; she is melancholic. How did you approach playing her and making her sympathetic?

Amos, when I met him and he agreed to let me make the film of his book, asked me, "Don't try to explain Fania. That was the error people who wanted to adapt this before you have made.” That was important to me. Fania is a mystery for Amos, too. It’s something he thinks about growing up and his whole adult life. I wanted to bring romanticism to it.

I think it is interesting that there was a cultural tendency — there was a wave of women who suffered melancholia. My own grandmother, who was Romanian, had that Slavic tendency — that in the middle of a sentence she would drift off and have a weepy moment. Very dramatic . . . very “Karenina,” looking out the window wistfully with the landscape going by.

Did you base your portrayal of Fania on your grandmother?

No. I based it more on the character that I imagined while I was reading the book. My grandmother was the exact same generation and similar background, though.

Another line that resonates is Amos’ line about fulfilled dreams being disappointments. Do you feel making this film was a dream fulfilled? Was it disappointing?

[Laughs] It’s bittersweet. I would modify that statement to say "not disappointing but so different than your expectations.” That can be really hard to deal with, but I think what separates the healthy and the unhealthy is how you deal with that difference. It’s universally true that you can’t expect what actually comes.

So how do you deal with it?

Every situation is different, but when you accept that there is a difference, you adjust your expectations. You try and work to make the reality more like your dreams. That’s an optimistic person’s way of dealing with that dissonance.