NBC's "Superstore" challenge: Can an Olympics preview win over viewers?

NBC shows' Olympics episodes aren't always worth it — but overall, "Superstore" is 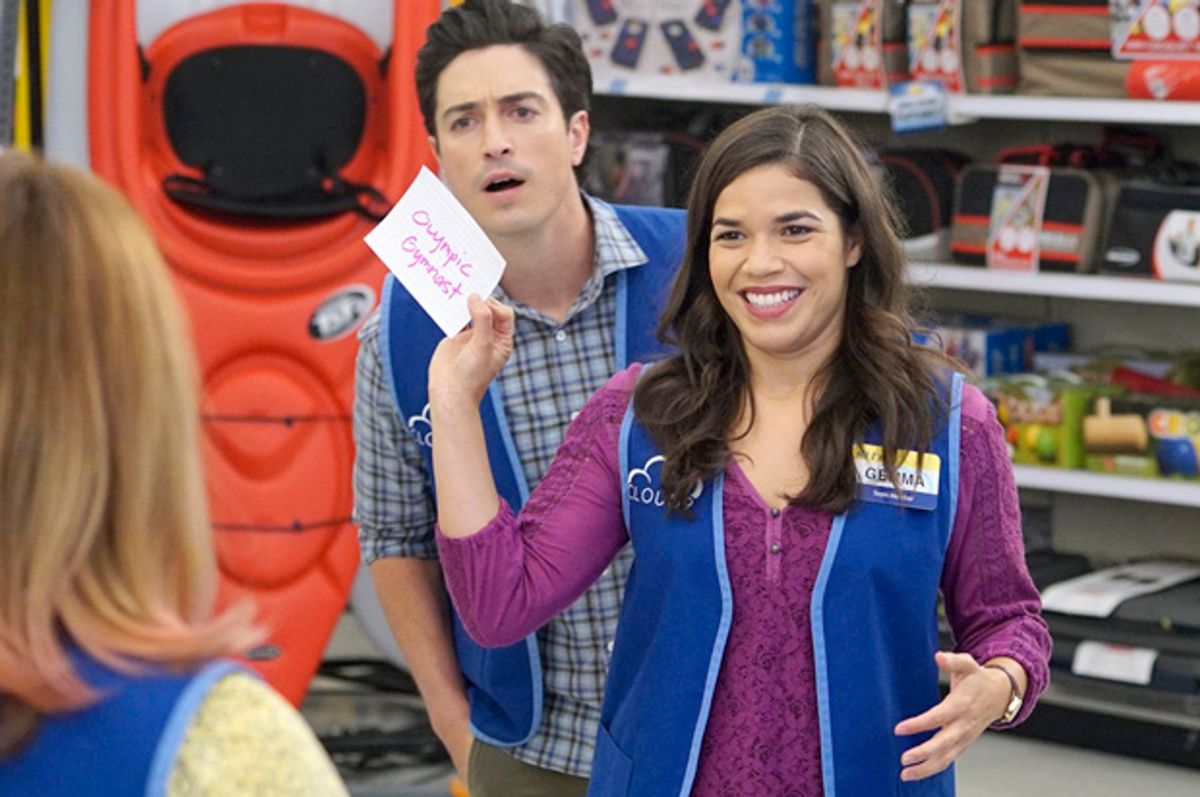 History indicates that previewing a little-known comedy in the midst of Olympics coverage is a terrible idea.

From a business perspective, it’s easy to understand why a network would do it. For example, according to TV by the Numbers, NBC’s primetime Olympics coverage is averaging 26.78 million viewers a night. That’s a huge potential sampling audience for any broadcast sitcom. For NBC, which attracted an average viewership just shy of 6.6 million for its highest-rated comedy, “Superstore,” those additional 20 million viewers represent a bounty waiting to be claimed.

Even so, when NBC attempted to harness higher Olympics’ audience numbers to bring exposure to two new comedies in 2012…well, remember “Animal Practice?” The one with the monkey wearing scrubs? The network interrupted coverage of London’s closing ceremony to give audiences a preview. Viewers did not thank NBC for that favor.

What about “Go On,” Matthew Perry’s half-hour about a man who joins a grief counseling group?...No? It received the Olympics preview treatment as well. Like “Animal Practice,”  “Go On” did not survive its freshman run.

Unlike “Animal Practice” and “Go On,” however, “Superstore” is legitimately funny and deserves a larger audience than it attracted over its 11-episode first season. Indeed, the fact it’s on NBC may have gotten in the way of more people discovering it -- myself included.

This is not to cast aspersions on NBC, which finished the most recent TV season in second place in the all-important 18-49 demographic. (People love its dramas and “The Voice,” which is getting its own half-hour Olympic preview following the closing ceremony.) It’s just that there hasn’t been an overtly compelling reason to revisit the network’s comedy block since “Parks and Recreation” went off the air in 2015. As the ratings for “Superstore” indicate, I’m not the only one that feels that way.

What we’ve been missing in overlooking “Superstore” is a series that intelligently presents one of the most optimistic, unsentimental visions of American life on television. Part of that is due to its commonplace setting; more than a few urbanites voice their disdain of big box stores as capitalist blights on independent business, or symbols of rural and suburban America's ruin. But nearly everybody patronizes one at some point. They just don't tell anyone.

Besides, the employees “Superstore”'s fictional Cloud 9 are a relatable crowd. They’re hardworking, put the customers' needs ahead of their own, and thumb their noses at their corporate overlords whenever they can. There's a bit of an "Office Space" flair to "Superstore," but the show is sunnier than that film, with wide aisles replacing the cubicles and employees who are determined to stick it out in spite of the crummy hours, low pay and lack of benefits.

The surface view of “Superstore” makes it appear as if the characters were hatched out of a sitcom diversity incubator. There’s Garrett (Colton Dunn) the acerbic black guy – in a wheelchair! There’s Amy (America Ferrera), Cloud 9's most knowledgeable employee. She is constantly battling the ignorance all around her and often compensates for Glenn (Mark McKinney), the well-meaning store manager -- also a hardcore Christian.

It all reads as so very sitcommy.  If the show were to follow those expectations, its writing would be toothless, with plots chosen from a grocery list of inoffensive ideas. On the contrary — to watch “Superstore” is to take a trip through the land of assumption, both on the part of its characters and the viewer.

Cloud 9’s employees defy our expectations at every turn. Episode-long gags are mined from situations involving casual prejudice: Should a self-respecting Latina affect a stereotypical accent to push salsa? No! But what if a portion of each jar’s sale benefits a good cause…and an accent make customers trust the recipe’s authenticity? Well, then…“Bueno!”

People have weird crushes. The show’s central “will-they-or-won’t-they” couple has a gigantic obstacle in its way. More than this, the brave season finale revolved around the potential of forming a union, culminating in a well-earned and heartwarming climax — and a punch-in-the-gut twist. All these stories showcase “Superstore”'s delicate balancing act between the political and the heartfelt, without losing its edge or its charm.

The Olympics episode, scheduled to air after Friday’s coverage at 10:30pm ET, is a standalone story that occurs prior to the events of season one’s finale, and was not made available to critics. (Season two kicks off at 8 p.m. Thursday, September 22, and season one is streaming now on Hulu.) Similar to the athletes competing in Friday’s events, Cloud 9’s staff may stick the landing or stumble horribly in front of millions who are meeting them for the very first time. We simply won’t know until we watch.

But if want to support creative, insightful television comedy, one that underscores the ways that our differences bond and strengthen us as opposed to how they divide us, stick around after the men’s volleyball semifinal to check out “Superstore”'s extra shift.