Thank you, Larry Wilmore: "The Nightly Show" goes out with a party — and a reminder to "not confuse cancellation with failure" 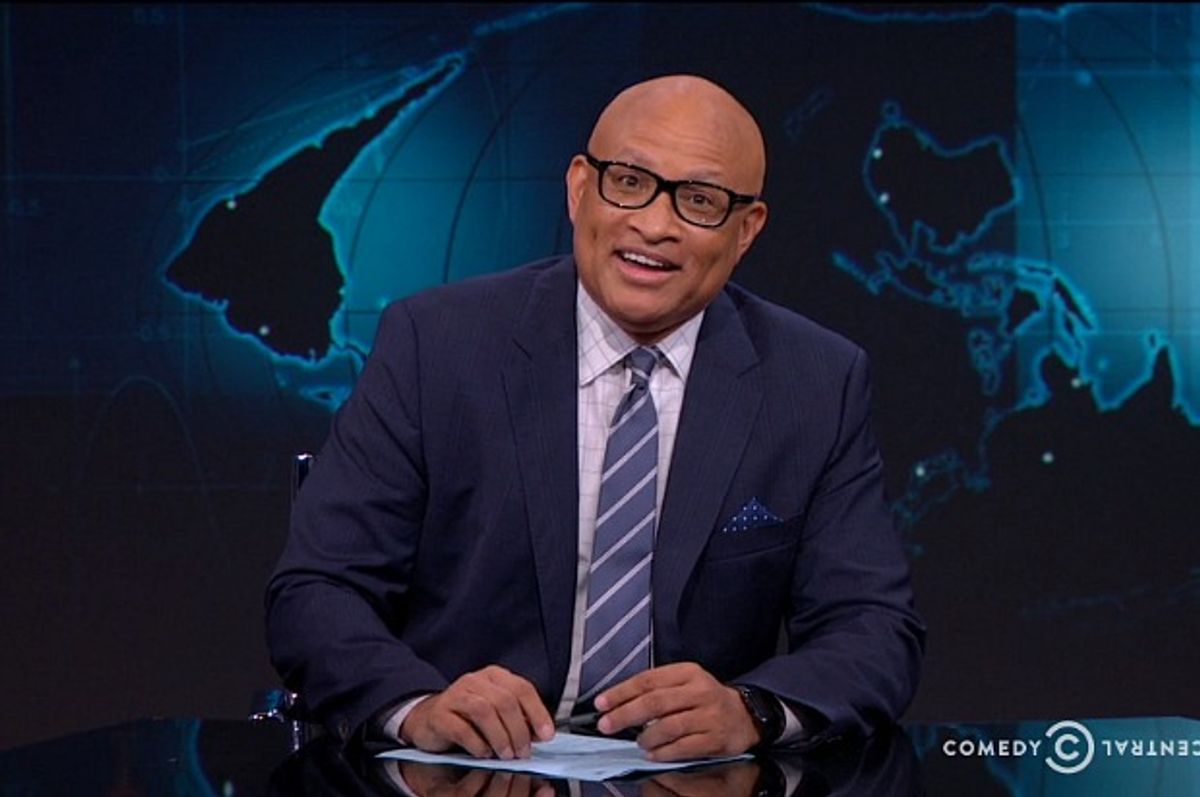 Referring one last time to the unfortunate cancellation notice the cast and crew received on Monday, Wilmore reassured the audience: “There has been a silver lining, you guys: All the free booze!”

“Full Frontal” host Samantha Bee, a fellow former correspondent for “The Daily Show with Jon Stewart,” sent over several cases of wine on Tuesday; Wilmore cheekily imbibed her condolences during that night’s broadcast.

Not to be outdone, the former occupant of “The Nightly Show’s” timeslot, Stephen Colbert, also sent the cast and crew an ample supply of hard liquor in mini-bottles. And saving the best for last, “The Daily Show with Trevor Noah” sent over…baked goods.

“Seriously? Pastries guys? How am I going to get wasted eating a stupid almond croissant?” Wilmore asked, before revealing the true piece de resistance of the final “Nightly”: a magnum of Veuve Clicquot champagne, courtesy of “Daily Show” alum and “Last Week Tonight” host John Oliver.

Whether the cast’s, shall we say, distilled energy contributed to the feeling that the show’s been burning more brightly in its last days is a matter of perspective. In all, the final episodes of “The Nightly Show” have had something of a topsy-turvy feeling to them. Wilmore admitted as much on Tuesday, when he alleged that he and his contributors had a huge, blowout of a show planned.

But then, wine happened. Lots and lots of wine. With the recession still visible in our rearview mirrors, and political uncertainty all around, surely the audience understood and appreciated the compulsion to knock back a few. If you had lost your job, you would too.

All in all, “The Nightly Show’s” final episode was warm and consistent and not at all extraordinary, aside from a surprise appearance by Jon Stewart, who created and executive produced the show under his Busboy Productions shingle. And that’s fine.

There are all kinds of finales: ones that mindfully tie up every loose end, ones that make it obvious that the writers and cast are shoving the show off a cliff, and ones that part the audience with the show, leaving the feeling that the journey will continue on without the viewer.

The end of “The Nightly Show” represented a mixture of those second and third versions of endings. Obviously Wilmore and his collaborators wanted to acknowledge the fans who stuck by them even if, as Comedy Central president Kent Alterman said, the show didn’t “resonate.”

But one could also feel a “f—k it” vibe radiating from the TV screen. A buzzed, laissez-faire atmosphere ruled the show’s final 29 minutes and 31 seconds, starting with a segment that was supposed to address a social media controversy involving Ellen DeGeneres. Instead, it comically fell to the wayside because contributor Robin Thede was sipping cocktails from (a green screen) paradise; Franchesca Ramsey was on a Skype interview and no longer had cares to give; Jordan Carlos and Grace Parra were dressed as an astronaut carrying an adult baby for no good reason; and Holly Walker was too busy enjoying a bedtime interlude…with Rory Albanese.

Both Mike Yard and Ricky Velez had booked time off prior to the show’s cancellation and couldn’t be there for the final episode which, given their central roles in the series, added to the episode’s tragicomedy.  (Yard even joked in a farewell video, “So what do say when you lose your dream job the day before you’re about to go on your dream vacation? How the hell am I gonna pay for all this s—t?” )

There was no agenda for the last “Nightly” roundtable. There wasn’t even a table. Maybe Comedy Central reclaimed it early. Its absence seemed apt, since the contributors' gathering was an unstructured, formless, familial chat with no intent beyond celebration and reminiscing.

The point of watching talk shows like “The Nightly Show,” and “The Daily Show” in its finer moments, is to view exchanges that are more informative, clever and pointed than then ones in which we engage day to day.  "Nightly"'s final discussion achieved none of those aims. In fact, it represented exactly what people loved and hated about that format choice, with voices tumbling over one another and making points that only landed halfway. It also demonstrated the limited power of personality on late night, and the hope that personality alone can trump performance and structure. Quite often, it doesn’t.

Then again, that segment was a final indulgence strictly for the contributors and viewers who were in on the “Nightly Show”'s grand joke from the beginning.

As Stewart pointed out, Wilmore and “The Nightly Show” contributors and crew will walk away from that set, but that doesn’t mean the discussion ends.

“A very wise man said to me, ‘Do not confuse cancellation with failure.’ And I took that lesson to heart,” Stewart told Wilmore as he sat in the guest chair one final time.

Stewart ended his heartfelt valedictory with an intentionally awkward reference to Wilmore’s N-word gaffe at the White House Correspondents' Dinner: “And so, in closing, I want to say to you this -- you did it, my…my… my mishpocha!”

Stewart’s tenure on “The Daily Show,” as well as Bee’s, Oliver’s and Colbert’s, both on that show and “The Colbert Report,” came to their ends with bright celebrations. Stewart’s and Colbert’s, in particular, were celebrity-studded blowouts with months of media fanfare running up to them.

The end of “The Nightly Show with Larry Wilmore” was quiet, in contrast, featuring no other star power than Stewart’s, who is pretty much family anyway. He left quickly after eloquently singing Wilmore’s praises so as not to overshadow the contributors. “I have never worked with a funnier, sicker, darker group of human beings,” Wilmore said with a laugh.

As Wilmore brought the show to an end, thanking the usual suspects — Comedy Central, Stewart, the fans and even the haters (“Never undervalue the passion of a hater!”) — he answered the number one question he gets from the audience before each taping: Why was the set’s map of Earth upside down?

“I always say, ‘Well, I disagree with your premise,’” he replied. “You see, upside down is just an opinion. If you’re floating in space, the Earth can take on any orientation. But as a culture we all agree with the opinion that the world should be seen in a certain way.

“So at ‘The Nightly Show,’ our chief mission was to disagree with that premise, and to see the world in a way that may not make everybody comfortable, and to present it with a cast of people who don’t always get to have a voice on that,” Wilmore continued. “So on that front, I feel that we’ve been very successful and I couldn’t be prouder of what we’ve accomplished.”

Then, choking up ever so slightly, Wilmore invoked his show’s slogan, saying he had to “keep it 100.”

Earlier in the week, Wilmore observed that over the show’s twenty-month run, it was at its best when the news was at its worst.  When people would approach him after a taping, they wouldn’t say, “Good show.” They’d say “Thank you.”

It seems appropriate to echo that sentiment now. And with any luck, we won’t have to wait very long to hear Wilmore and the rest of “The Nightly Show’s” personalities weigh in on the conversation once more.