Uber got this right — Pittsburgh is America's city of the future

The Steel City is more than the country's next great innovation hub — it's a model for the Rust Belt's revival. 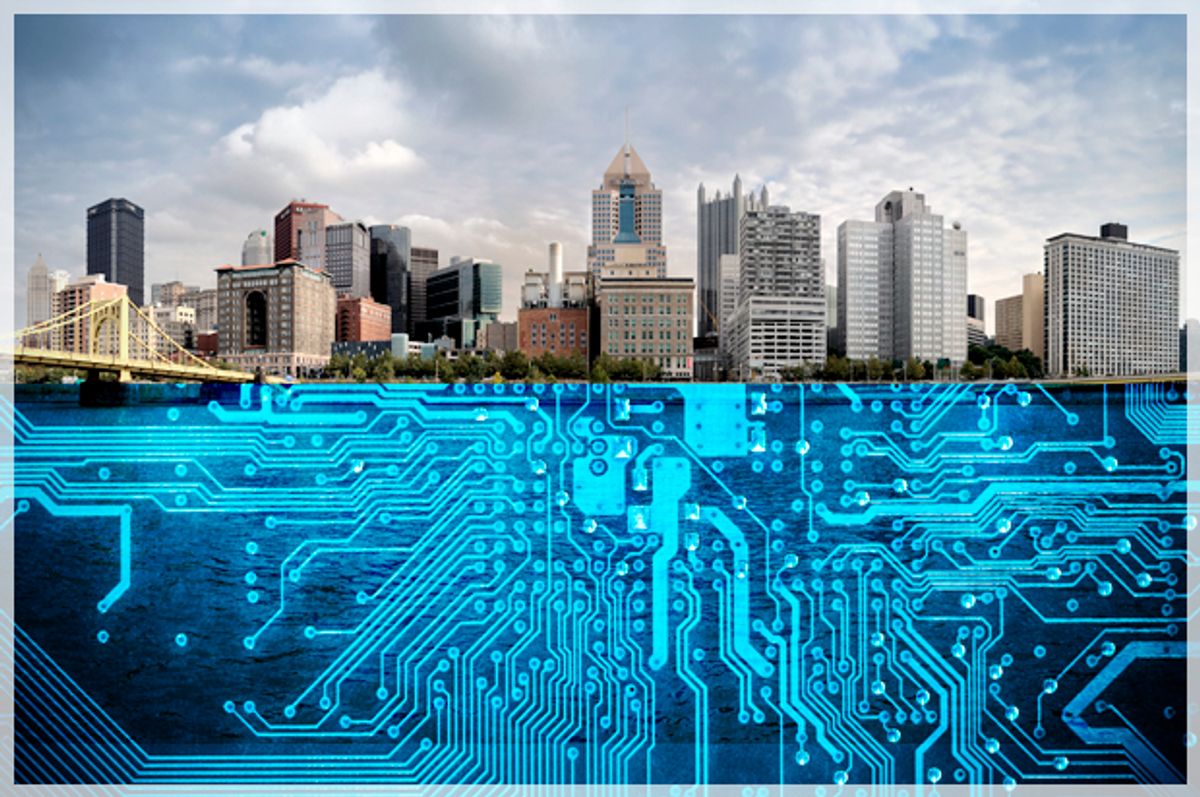 Had Brian Gross been born a decade or two earlier, he might have been one of the many Pittsburgh natives all but forced to leave the city for better opportunities. Instead, the 25-year-old computer scientist in 2012 co-founded AthleteTrax, a startup that offers web-based payment processing and other online services for minor sports leagues, in one of the hottest innovation hubs in America: his hometown.

“My business partner and I both grew up in Pittsburgh,” Gross, the company’s chief technical officer, told Salon. “We’re old enough to remember the steel days and the rebirth of the city.” Now if the weather permits, he and fellow co-founder and CEO Jon Halpern sometimes work on the roof patio of their office by Carnegie Mellon University that overlooks a row of restaurants and bars.

In the 1980s Pittsburgh’s steel and manufacturing industries imploded and were virtually wiped out by the rise of globalization in the following decade. As the new century approached, city officials began to steer economic development toward education, health care and technology. The government of Pittsburgh took a lead role in nurturing more than a dozen public and private organizations with the aim of kick-starting businesses by providing seed funding, office space and networking opportunities.

Today other Rust Belt cities like Detroit, Buffalo and Cleveland have attempted to replicate Pittsburgh’s success in transforming their struggling 20th-century economies into 21st-century successes. But none so far appear to have been as successful.

Pittsburgh’s home prices are rising and the city’s population increased last year for the first time in six decades. Since 2000, the “City of Bridges” has regularly won accolades for qualities like livability, economic mobility and safety.

On Thursday news broke that Pittsburgh will win another distinction: being the first place in the world where people will be able to grab a ride in a robotic car. According to Bloomberg Businessweek, by the end of the month a small number of Volvo XC90 sport-utility vehicles equipped with cameras, radar and lidar sensors will prowl the streets of downtown Pittsburgh, picking up Uber customers. The cars will still have a human in the driver’s seat in order to comply with safety regulations, but the plan is for the cars to be fully autonomous, said Uber CEO Travis Kalanick.

So how did a western Pennsylvania Rust Belt city beat Silicon Valley and Singapore in achieving this milestone in automotive transport? Well, for one thing, Carnegie Mellon has had an outsize role in the development of advanced robotics through its National Robotics Engineering Center.

Over recent decades the city’s massive riverside steel mills and shipbuilding yards have been replaced by glistening new buildings housing groups like the Pittsburgh Technology Council and TechShop Pittsburgh. A century-old Nabisco factory that closed in 1998 now houses Google offices and a University of Pittsburgh medical technology center.

Local business incubators like Thrill Mill have been instrumental in attracting and keeping entrepreneurs in the city, too. Gross said his company took $25,000 from the AlphaLab incubator in exchange for a 5 percent stake in his company. Since exiting the incubator program earlier this year, AthleteTrax has attracted more than 100 facilities and recreational sport organizations to use its platform, Gross said.

Dick Zhang, founder and CEO of Identified Technologies, which makes drones and analytical software used in the construction industry to map projects, said he was lured to Pittsburgh from his home state of New Jersey because he saw better opportunity there.

With AlphaLab’s initial boost in 2013, Zhang was able to attract $4 million in local-investor funding for his company, he said. “Pittsburgh has been this well-kept secret in the U.S.,” he told Salon. “All of the hype and the attention have been elsewhere.”

From the point of view of the highly skilled workers who begin companies there, Pittsburgh is clearly doing something right. This activity has had ancillary effects on the local economy, too, as these entrepreneurs pay taxes and spend money in the local economy.

But in other ways Pittsburgh is still struggling. Home prices are rising but this also hurts local lower-income earners. Unemployment in the area is 5.5 percent, according to the state’s Department of Labor and Industry, significantly above the national 4.9 percent average and higher than the state’s average. The Pittsburgh area is shedding about 400 jobs a month, thanks largely to broader declines in the U.S. energy sector, according to the Keystone Research Center in Harrisburg, Pennsylvania.

The center’s labor economist Mark Price pointed out that while it’s good to have an effective policy to promote business development, this doesn’t necessarily help local workers who have been displaced by a loss of manufacturing jobs or people working in lower-paid jobs. As with any place where the future is bright, Pittsburgh's present is full of both hope and impatience.

“It’s an up-and-coming city that’s trying to recover from changes to its economy,” Price told Salon. “And it’s certainly a good thing to be known as the ‘home of the driverless taxi.’ But it won’t lead to broad-based income growth in the city.”