Inspiring lessons of this year’s Olympics? Same as the Trump campaign: Smash stuff, lie and issue a fake apology 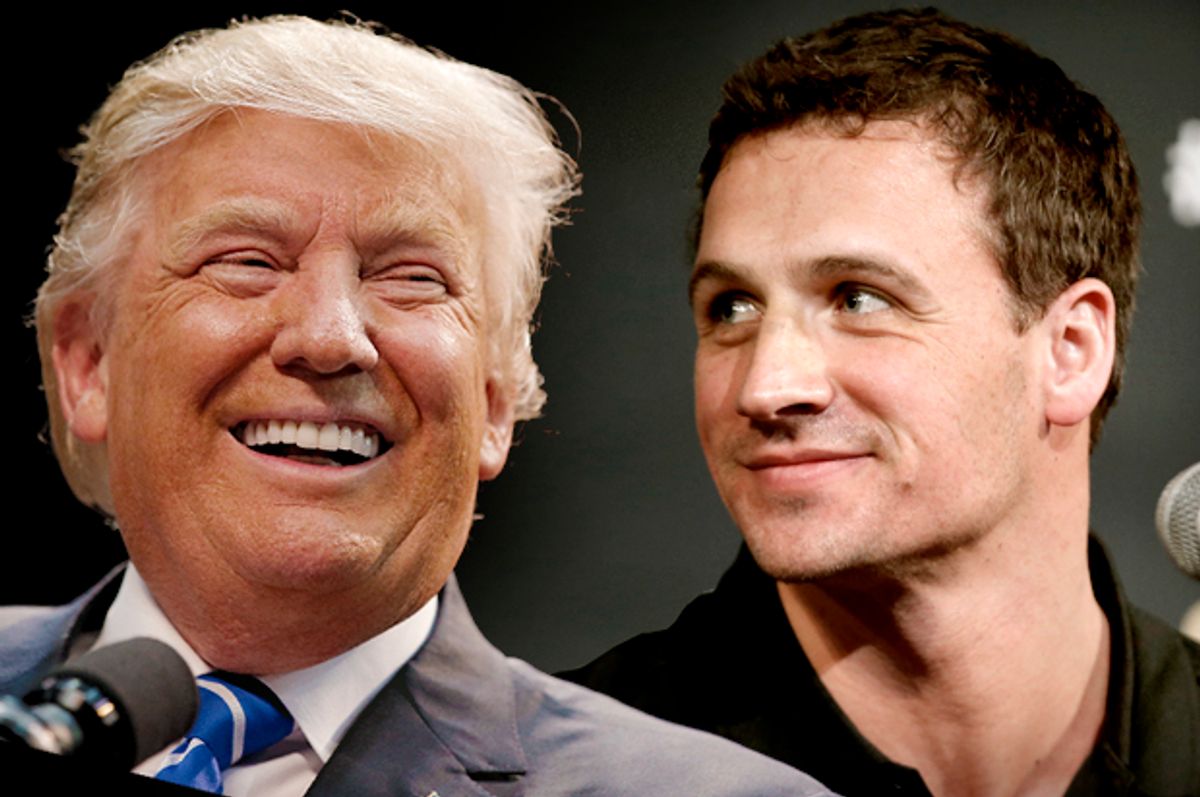 One of the more embarrassing aspects of the Olympics is the quadrennial effort by journalists to mine cultural meaning from an amorphous and heterogeneous spectacle that, by its very nature, can be used to make any point or support any argument. To paraphrase a wonderful poem by the neglected British humorist Edward Lear, the Olympics contain all the morals that ever there were, and set an example as well. Want to argue that the Olympics are a jingoistic war-substitute? A litmus test for feminist progress? An overproduced schmaltz-fest? A hidden tale of backroom injections and falsified test results? Come on in, the water’s fine.

David Brooks of the New York Times, perhaps our most esteemed practitioner of pseudo-profound cultural inquiry, offered a sterling example this week with a column wondering why so many young Americans were so pessimistic about our democracy. After all, American athletes are doing so well at the Olympics! To be fair, Brooks moves on from that brain-boggling non sequitur to a somewhat sequential argument that America is good at other things too, and the purported mood of national pessimism is therefore unmerited. (I’m pretty sure he has heard of the Soviet Union, and is aware that athletic achievement has no obvious correlation with democracy or capitalism.)

Some of Brooks’ tossed-off examples are debatable at best, as when he argues that the notoriously erratic Food and Drug Administration “is the benchmark for medical standards.” But that’s not the point. Brooks never mentions Donald Trump, the unquestioned avatar of American pessimism, although I would say the entire column was written in the long, dark Trumpian shadow. He mentions swimmer Ryan Lochte only in passing, as an example of the “amazingly American stories and personality types” found at the Olympics.

Trump and Lochte are amazingly American, no doubt. Taken together, they effectively provide the answer to Brooks’ incoherent question. The disgraced American swimmer and the disgraced American candidate found themselves in similar predicaments this week. It’s a marriage made in hell, or at least in purgatory: These two clowns epitomize the disordered state of the American psyche, circa 2016, almost too perfectly.

Lochte and Trump are a pair of arrogant, ignorant jerks who believe that neither conduct nor character actually matters, and who feel entitled to rescue themselves from any sticky situation through the strategic application of lies and money. They’re the white men who give white men a bad name (which is, of course, deeply unfair). They’d almost be comical, if one of them weren’t endangering the future of the republic and if they weren’t working so hard to reinforce the entire world’s negative stereotypes about Americans. (Which are, of course, deeply unfair ... no, I’m sorry, I can’t say it with a straight face.)

At this point it has become a truism to describe Trump as a candidate molded by reality TV, but that doesn’t make it untrue. Lochte has also played himself on television, with considerably less success. Beyond that, both men are fundamentally creatures of the digital age, shaped by an Internet culture of pixel-thin celebrity, instantaneous “hot takes” and moronic or hateful behavior with virtually no consequences.

Lochte was compelled to hire a “crisis P.R. expert” named Matthew Hiltzik, who has previously worked for Alec Baldwin and Justin Bieber, after allegations surfaced that Lochte had vandalized a gas-station restroom in Rio de Janeiro and then invented a story about being robbed by police officers. The man now known to Twitter as “Swim Shady” — a reference to his resemblance to the rapper Eminem — subsequently issued an apology on his Instagram account, without making it entirely clear what he did to be sorry about. He should have been “more careful and candid in how [he] described the events of that early morning,” Lochte wrote. (Or, more likely, his well-compensated mouthpiece wrote.) Doesn’t that imply that some degree of care and candidness was involved in his apparently fraudulent account of a nonexistent crime? Regrettably, it was less than an optimal amount.

I feel confident that at some point in his life Donald Trump has smashed up a bathroom, but that wasn’t his issue this week. The Republican presidential nominee — that phrase still sounds hilariously unlikely, long after the fact — was compelled to hire an entire new campaign team. (Is this the third reboot, or the fourth?) It includes a so-called campaign CEO named Stephen Bannon, who is also the head of Breitbart News, a media organization that specializes in lightly sanitized versions of extreme right-wing conspiracy theories. The Southern Poverty Law Center has described Breitbart as “the media arm of the Alt-Right,” meaning the loose network of racist, paranoid anti-government fanatics found on the farthest fringes of conservative politics. Former Breitbart reporter Jordan Schachtel, who quit the site in March, has called it “an unaffiliated media Super PAC for the Trump campaign.”

Trump’s latest campaign shuffle happened because — do I really need to list the reasons? Who can keep track? His poll numbers are spiraling toward the drain, numerous prominent Republicans have either deserted him or resorted to pretending he doesn’t exist, and every time he opens his mouth he alienates someone new. Although Trump’s feud with Khizr and Ghazala Khan, the Muslim immigrant parents of a U.S. Army officer killed in Iraq, has faded from the headlines, that may have marked his political point of no return. It was his cognate to Mitt Romney’s “47 percent” recording four years ago, except juiced up with extra hate and testosterone.

As for alleged misdeeds, the list is long, but those have never seemed to damage Trump during his presidential campaign. This is the candidate who boasted, early in the year, that he could murder someone in broad daylight without affecting his poll numbers; he serves as an inspiration and role model to the Ryan Lochtes of the world. Interestingly, Paul Manafort, the veteran Washington operative who just resigned as Trump’s campaign chair on Friday, did not possess the same immunity. In the wake of Trump’s ambiguous or admiring comments about Vladimir Putin, and his suggestion that Russian hackers might release Hillary Clinton’s State Department emails, Manafort’s apparent financial ties to the ousted Ukrainian president widely perceived as a Putin stooge became toxic.

I’m not suggesting that anyone should expend a moment's sympathy on Manafort, whose political slime trail extends several decades into the past and who, at the very least, seems to have repeatedly mischaracterized the nature of his extensive consulting and lobbying work on behalf of the former Ukrainian regime. But from here, it looks as if Manafort was fired from the Trump campaign not because he took millions of dollars from a sketchy foreign autocrat but because he got caught, and became an embarrassment. He was unable to skate past the alleged wrongdoing, in Trump-Lochte fashion, and so diverted attention from the Great Pumpkin-like glory of his boss.

Trump also apologized for something this week during a speech in North Carolina, which felt weird to everyone watching and can only have been deeply uncomfortable for his supporters. The entire point of Donald Trump (to the extent there is one) is a guy with no filter of civility or decency or “political correctness,” who will say whatever damn thing comes into his head and shrug it off afterwards. His repeated charge that Barack Obama was the founder of ISIS was first presented as factual, then as sarcastic and finally as “sarcastic, but not that sarcastic,” a rare instance of idiocy colliding with Solomonic ingenuity.

Trump’s reference point for his apology was, if possible, even vaguer than in Lochte’s case, not to mention deflected into deep space by the use of the second person. “Sometimes in the heat of debate and speaking on a multitude of issues,” he said, “you don’t choose the right words or you say the wrong thing. I have done that. And, believe it or not, I regret it.” That “believe it or not” is what’s called a “tell” in poker. Or maybe it's just an Internet formulation. Many of us have clicked on headlines assuring us that we won’t believe what outrageous secret was about to be revealed, only to discover that it either wasn’t a secret or we didn’t believe it.

For Donald Trump or Ryan Lochte to believe in something, or to express genuine regret, would require some conception of the world outside their enormous egos, and also some conception of a moral code that ought not to be transgressed. Their instrumental and cynical understanding of politics and celebrity and sport and everything else — the worldview behind the fake apology that never addresses the misdeed, or seeks to remedy the harm — is certainly not new, and not yet ubiquitous. How far has it spread, and how much damage has it done?

I’m not especially troubled by Brooks’ statistic suggesting that one-quarter of younger Americans say they believe democracy is either a "fairly bad" or "very bad" political system. You can argue that those people are wrong, but on empirical grounds that’s not an inherently irrational belief. When one of our major political parties nominates someone who transparently doesn’t believe in democracy, or at any rate has no idea how it works -- and when at least 40 percent of the public plans to vote for him -- we might have a problem.