A tale of two TV shows: "Rectify," "Lethal Weapon," and the battle to be seen in the age of Peak TV

Fall TV Preview: We have more great series than ever. But, awash in choices, go with the fresh or the familiar? 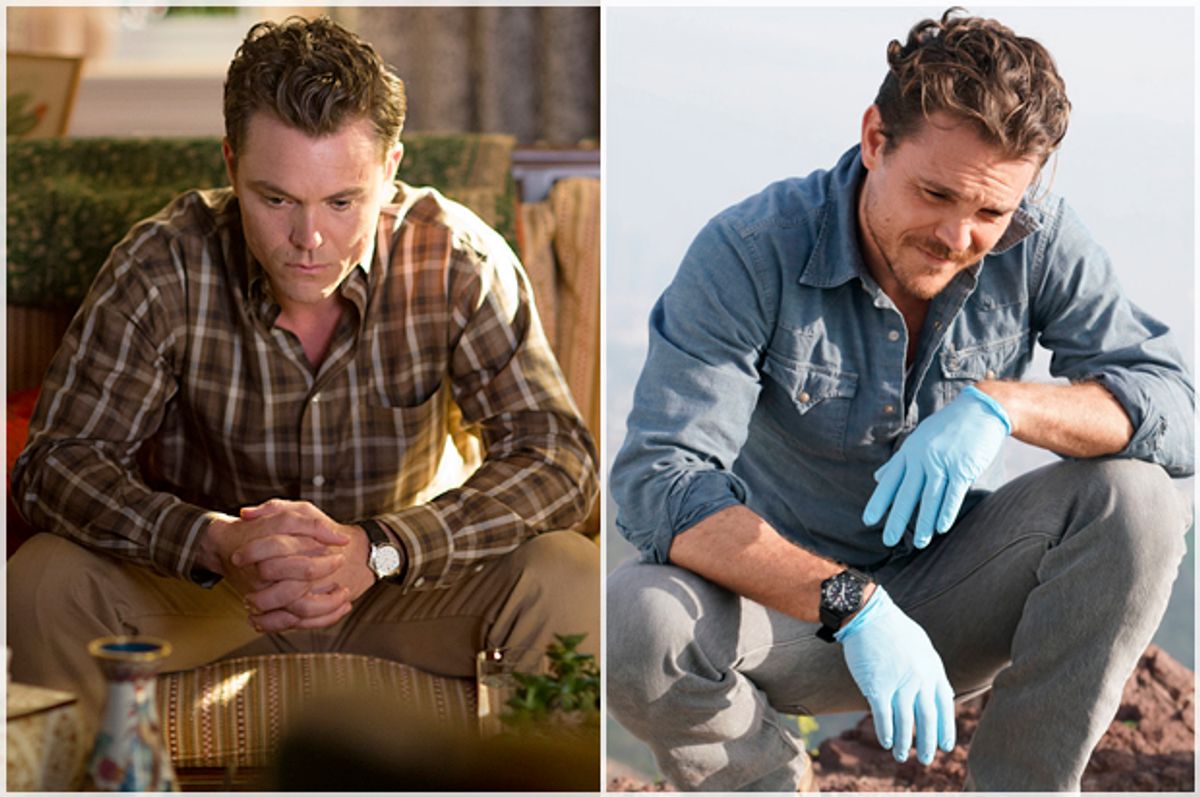 To begin to grasp one of the major challenges facing networks as we head into the new TV season, let’s contemplate the example of Clayne Crawford.

Crawford, an experienced actor, is not a household name. That could change shortly, as he is appearing in two series on the fall schedule. One, “Rectify,” kicks off its fourth and final season on Oct. 26 on Sundance. The other, Fox’s “Lethal Weapon,” premieres at 8 pm on Wednesday, Sept. 21.

In “Rectify,” Crawford shines as a member of the supporting cast. In “Lethal Weapon,” he’s one of the leads, reprising the role originated by Mel Gibson as Martin Riggs, alongside Damon Wayans as Roger Murtaugh, who was first portrayed by Danny Glover.

“Lethal Weapon” is brand spanking new — or, we should say, a new television series based on the famous 1987 action film and the franchise it spawned.

“Rectify,” in contrast, still remains a mystery to most viewers after three seasons of airing on Sundance. Never heard of it? Don’t worry, you’re not alone. At a recent Television Critics Association panel for “Lethal Weapon,” it was fairly apparent that Crawford’s new bosses, executive producers Matt Miller and McG, hadn’t seen it either.

Here’s where we get to fall TV’s big quandary: Statistics show that a significant portion of the audience is more likely to watch a show like “Rectify” than most series debuting this fall. We’re not talking millions upon millions here, but Sundance's great little drama could gain a few new viewers before other freshman series find their audience.

Does this mean people are suddenly listening to critics and the television connoisseurs in their lives? Maybe. But the approval of tastemakers has little to do with “Rectify's” improved chances.

No, if “Rectify” has even a slightly larger audience for its final run, it will be because its first three seasons are streaming on Netflix.

Behold one of the champagne problems in the age of Peak TV: There’s simply too much worthy content to consume, and fewer reasons to sample the worthiest of them as they air in their timeslots.

Let’s begin with statistics recently cited by FX’s president John Landgraf. After his network's researchers counted up the number of series that have debuted and are expected to debut in 2016, Landgraf expects the total number of adult English language scripted premieres to land somewhere between 430 and 450 by year’s end. Again, that’s only scripted and only English language.

Before Landgraf dropped that bomb, NBCUniversal’s president of research and media development, Alan Wurtzel, revealed that 54 percent of viewers they surveyed won’t start watching a show if they don’t have access to prior episodes. No wonder! “That’s a big deal,” Wurtzel told critics. “And I think that everybody in the business has to take heed of that [number] because it’s a huge issue.”

Wurtzel's research team gleaned his data from a July study that targeted 18- to 64-year-olds who watch at least one hour a week of TV programming on any device.

For the networks and producers premiering new shows over the next few months, that number, 54 percent, presents an additional headache on top of the already existing challenge to stand out in a crowded marketplace.

The odds of survival for any new television series are perilously slim to begin with. Once the numbers were crunched on the 2015-2016 season, for example, the failure rate came in at between 52.3 percent and 61.4 percent.

Now factor in the idea that the audience might just be waiting to sample a few episodes before committing to your show and… well, if “Lethal Weapon” were to bow to “Rectify's” numbers, it would be off our screens quicker than Riggs can count “one, two, three.”

But Crawford and his new co-workers have one thing going for them: brand recognition. Not because they’re on Fox, but because they’re starring in a show based on “Lethal Weapon.” Even if you've never seen a single Murtaugh and Riggs adventure, you have a working idea of its central “buddy cop” premise, right?

It follows, then, that the average viewer may be more likely to at least check out “Lethal Weapon’s” introductory episode than, say, ABC’s terrific new comedy “Speechless,” which debuts during the second half-hour of Murtaugh and Riggs redux's very first primetime adventure. I don’t have to tell you what “Lethal Weapon” is about. “Speechless,” on the other hand, requires a little more explaining and critical justification.

Fox is similarly relying on your familiarity with the plot of “The Exorcist,” and your curiosity to see Geena Davis in the television remake, to attract plenty of eyes to its Friday primetime lineup, starting with that show’s premiere on Sept. 23.

And Fox isn’t alone in employing the tactic of spinning new television out of old movies. Mind you, we’re guessing few viewers saw the 1973 film that HBO’s sci-fi drama “Westworld” is based on. But anticipation for that one is sky-high.

Elsewhere, The CW is banking on at least a dim memory of the 2000 film “Frequency” to bring people to the television version of it.

Among the film-to-TV titles coming in midseason are NBC’s take on “Taken,” ABC’s serialized version of “Time After Time,” and a TV version of “Training Day” on CBS.

Want to factor in reboots of classic TV franchises, just for fun? Here are the new versions of old shows that will soon be joining the TV schedule: “MacGyver” is joining CBS on Sept. 23. Fox’s “Prison Break” and “24: Legacy” are due in the new year. It’s enough to make a perfectly healthy brain glitch! (In fairness, we actually are excited about “Star Trek: Discovery,” premiering in midseason on CBS All Access.)

Of course, having a recognizable film or TV title doesn’t necessarily guarantee success. Indeed, it may bring on a backlash. Witness last season’s demise of “Rush Hour” on CBS, the speedy failure of Fox’s “Minority Report,” and ABC’s cancellation of “Uncle Buck.” A viewer can’t help but be bothered by this overreliance on recycled ideas, and how it may speak to the accelerating creep of creative impoverishment.

Even if those series were known by other names, there’s no getting around the fact that they weren’t particularly exciting or even all that good.

Then again, being of decent quality didn’t save CBS’s “Limitless,” although by most any other network’s measuring stick it was worthy of survival. The show attracted a respectably sized audience and enjoyed critical support, neither of which was enough to earn it a second season on America’s Most Watched Network.

And yet… witness the lasting fandom for “Buffy the Vampire Slayer,” a series whose legacy far surpasses that of the movie that preceded it. Remember that CBS’s reboot of “Hawaii Five-O” was one of TV’s bigger hits in its first season, and is weeks away from surfing into season six.

Which brings us to the questions upon which Crawford’s continued employment on “Lethal Weapon” ultimately depend.

One: What if the show is actually worthwhile? Having seen the pilot, I can assure you it is a nimble, serviceable action hour that’s bound to win over a number of viewers. If Fox allows it to find its audience — NBC’s “Blindspot” and CBS’s “Survivor” offer hefty timeslot competition — it may have a shot at success. Similarly, “The Exorcist’s” premiere also passes the sniff test.

Two: Does my or any other critic’s opinion sway the viewer’s decision as to whether they’ll check on out new series any more than the viewer’s knowledge about and a familiarity with a title? According to Wurtzel’s research, possibly. Forty-seven percent of viewers say they will wait until they’ve heard enough positive buzz about a show before they’ll watch. “What we interpret that as saying is, people kind of want… a guarantee that if they try a show, they’re likely to like it,” he told critics. “… That puts a pretty big burden on us to essentially get people to kind of sample a program.”

This is not news. Every critic knows his or her persuasive powers are limited.

If I tell you that in Fox’s “Lethal Weapon,” Crawford does justice to the role that gave Gibson’s film career a second wind, that might matter. Maybe. Perhaps you’re a “Lethal Weapon” fan, and you were going to watch anyway — or, just as likely, you’ve made up your mind to avoid it.

If you are part of that 54 percent that needs to sit through a few episodes of a series before you can commit to it, binge your way through an introduction to Crawford’s work in “Rectify” on your favorite SVOD service. Then — and this is important — show up for the final season on Sundance when it premieres in October. People who value great television, and the Crawford clan, will thank you.