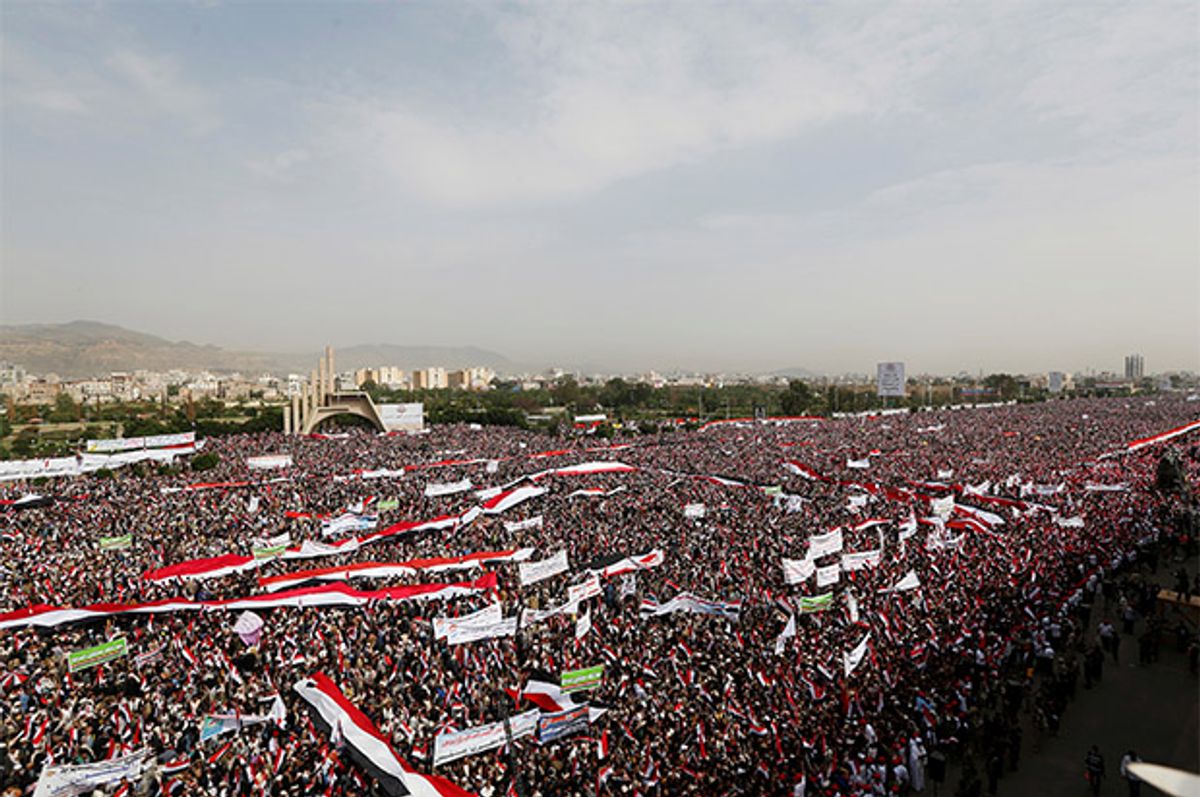 Hundreds of thousands of Yemenis rally to support rebels and oppose U.S.-backed, Saudi-led coalition bombing in the capital Sanaa on August 20, 2016 (Reuters/Khaled Abdullah)
--

Hundreds of thousands of Yemenis marched on Saturday in support of Houthi rebels and their ally, former President Ali Abdullah Saleh.

The Beirut-based outlet U-News published what it says is drone video footage of the enormous protest.

The march in the rebel-held capital, Sanaa, was in support of a new combined governing council the rebels and Saleh announced in late July, but which was immediately rejected by the internationally recognized Saudi-backed government and the United Nations.

On the same day as the massive demonstration, the coalition bombed the presidential palace in Sanaa and other areas in the city, leaving an unknown number of casualties, security officials said.

Yemeni political analyst Hisham al-Omeisy, who lives in Sanaa and attended the rally, told the BBC, "Suddenly the Saudi jets started circling on top of us, and as always, we thought they would just fly by, just trying to scare the crowd."

"Suddenly they started bombing and the crowd started running. I basically bolted out of the area. People started screaming," he continued. "Because everybody's very well armed, they started shooting their AK-47s and their machine guns into the sky."

Al-Omeisy posted video footage of the aftermath of some of the air strikes on YouTube.

He also tweeted photos after the air strikes.

"These are people who are fed up," al-Omeisy said of the crowd. "Even though a lot of people don't really agree with the Houthis or the ex-regime, they are there because they all agree that the Saudis need to stop the war."

"This is exactly why they showed up coming from all parts of Yemen to the capital," he added.

There was little media coverage of the immense demonstration and the air strikes in Western media outlets.

Yemen's war pits troops and militiamen loyal to the government, backed by a Saudi-led coalition, against the rebels and Saleh loyalists. The Houthis captured Sanaa in 2014, and the U.S.-backed coalition began its offensive against them in March 2015.

Former President Saleh was forced to step down in 2012, amid Arab Spring protests, after more than three decades in power.

From Aug. 7 to Aug. 15, the U.S.-backed coalition killed more than 60 Yemeni civilians, in air strikes on a hospital, school, civilian home, food factory and market.

On Aug. 15, the coalition bombed the fourth Doctors Without Borders hospital it has destroyed in the war. The U.N. condemned the attack, and the international medical humanitarian group withdrew its staff from six hospitals in northern Yemen in response.

Many of these attacks have also gotten little coverage in English-language news outlets.

"Unless a Yemeni kid washes up on the shores of Europe, nobody is going to pay attention to the Yemeni suffering," al-Omeisy lamented in his interview with the BBC.

Saudi authorities also accused the Houthi rebels of abuses. Saudi Arabia's civil defense directorate said that the Houthis had launched a missile over the border into the Najran region, killing a Saudi and wounding five Yemenis and a Pakistani who were residents there.

In Oman, one of the locations used for peace talks, Houthi negotiators said that Saudi forces were preventing them from returning to Yemen by blocking international flights to Sanaa's airport.

All officials spoke to the Associated Press on condition of anonymity because they weren't authorized to brief journalists.

(Some of this reporting was done by Ahmed al-Haj at the Associated Press.)