"We are the demographic Trump is appealing to": Whether the establishment likes it or not, white nationalists still power the Trump train 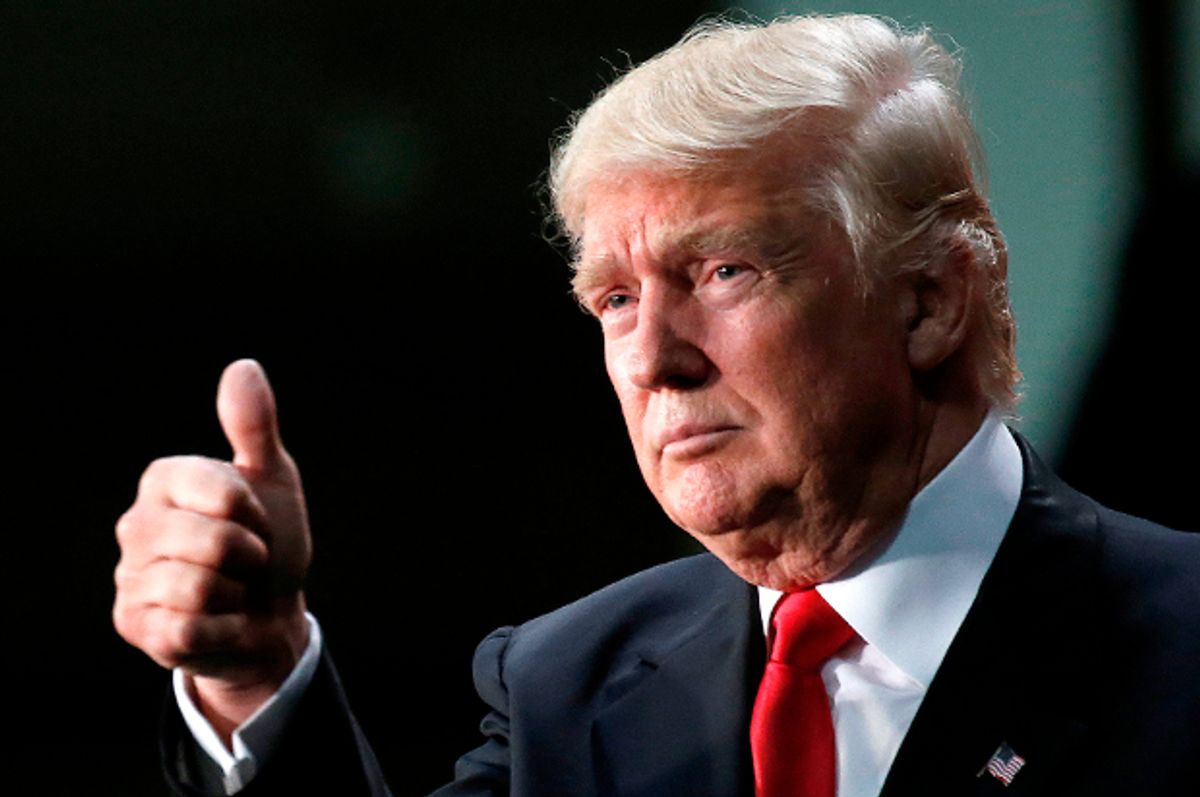 The party that nominated segregationist George Wallace for president in 1968 has now put Donald Trump on the California ballot. Formed one year before that election to nominate Wallace, then governor of Alabama, the far-right American Independent Party created a segregationist, “states’ rights” platform. Trump has often been compared to Wallace. In the 1976 presidential election, the party nominated “archsegregationist” Lester Maddox, the Georgia governor known for refusing to serve black customers in his restaurant after the Civil Rights Act of 1964 forbade segregation.

The Los Angeles Times reports that Trump's plan to build a wall at the U.S.-Mexico border was especially appealing to the California-based American Independent Party (AIP), which has over 450,000 registered voters in the state, although the majority of that total apparently consists of people who intended to register as independents. Surely Trump’s plan to ban Muslims from entering the United States is also exciting for AIP members. Its current party platform contains numerous references to God and “the Creator” and relies on “strict adherence” to the Constitution, opposes same-sex marriage, abortion and "illegal immigration," and strongly supports gun rights.

The secretary of AIP is Markham Robinson, who along with Alan Keyes sued for then-President-elect Obama’s birth records in November 2008. He says the party is no longer segregationist. Perhaps not, but they’re still racist: Here’s one of his choice Tweets:

AIP's nomination of Trump in California is no surprise, as the businessman has relied on racist rhetoric and controversial statements to rally his angry, white base. The state is home to a more overtly white supremacist party, The American Freedom Party, which sponsored robocalls for Trump in several state primaries.

“We are the demographic that Trump is appealing to,” said Robinson.

That’s certainly true, and Trump has continued his courtship with white men, hiring as his new campaign CEO Stephen Bannon, chairman of the sensational, “alt-right” (read: white nationalist) favorite, Breitbart News. This comes as Trump scores abysmally with women and people of color. (The latest polls have him at roughly one percent with African-American voters, for example.) His racist and xenophobic strategy worked wonders in the Republican primary but is tanking his general election prospects, which maybe, just maybe, will jolt some in the party into realizing they need to actually do something about racial, gender and economic inequality, instead of giving it lip service, as in the 2012 aftermath.

But of the 2,472 delegates at this year’s spiteful Republican National Convention, 18 were black. That’s 0.7 percent, folks. It’s going to take a heck of a lot to turn that ship around.

Better yet, let the GOP crumble and start a rational, right-of-center party with an actual conscience. Let the party split happen and stop pandering to white nationalists. Stop disenfranchising black voters. Stop telling transgender people they can’t use the bathroom that matches their gender identity. Stop opposing living wages. But then again, that mythical right-of-center coalition may be in the works already, coming out of the Democratic Party, with flocks of neocons and former members of the Bush and Reagan administrations endorsing Hillary Clinton, who many expect will remain neoconservative on foreign policy and neoliberal on the economy.

When people waged protests this summer after the near-daily news of police killings of black men, Trump embraced the “law and order” rhetoric that Nixon and Wallace both used in similar racist appeals to whites in 1968, and which Reagan continued as he escalated the war on drugs in the 1980s.

And as Trump put down the parents of a slain Muslim-American soldier and commented at a rally that gun-rights activists might be able to do something about Clinton and her Supreme Court appointments, most Republicans currently in office didn’t have the spine to retract their support of their party’s nominee. Republican New Hampshire Sen. Kelly Ayotte has put herself in the perplexing situation of criticizing Trump and refusing to endorse him while pledging to vote for him.

Now new polls show Trump is doing no better with white men than Romney did four years ago, and he may be even with or barely ahead of Clinton with this demographic. It seems as if non-white-nationalist whites are peeling away from him.

If Trump had lost the Republican nomination, he could have easily continued his presidential run on his own or with AIP or the American Freedom Party. But now the GOP needs to reckon with the fact that their nominee, who sailed to the presidential nomination, is the darling of white supremacists, and what that says about their party in general.