A blind date — to say "I do": “Married at First Sight” proves the unpredictability of romance

Beyond the obvious gimmick, "Married at First Sight" gives a fascinating glimpse into the anatomy of human romance 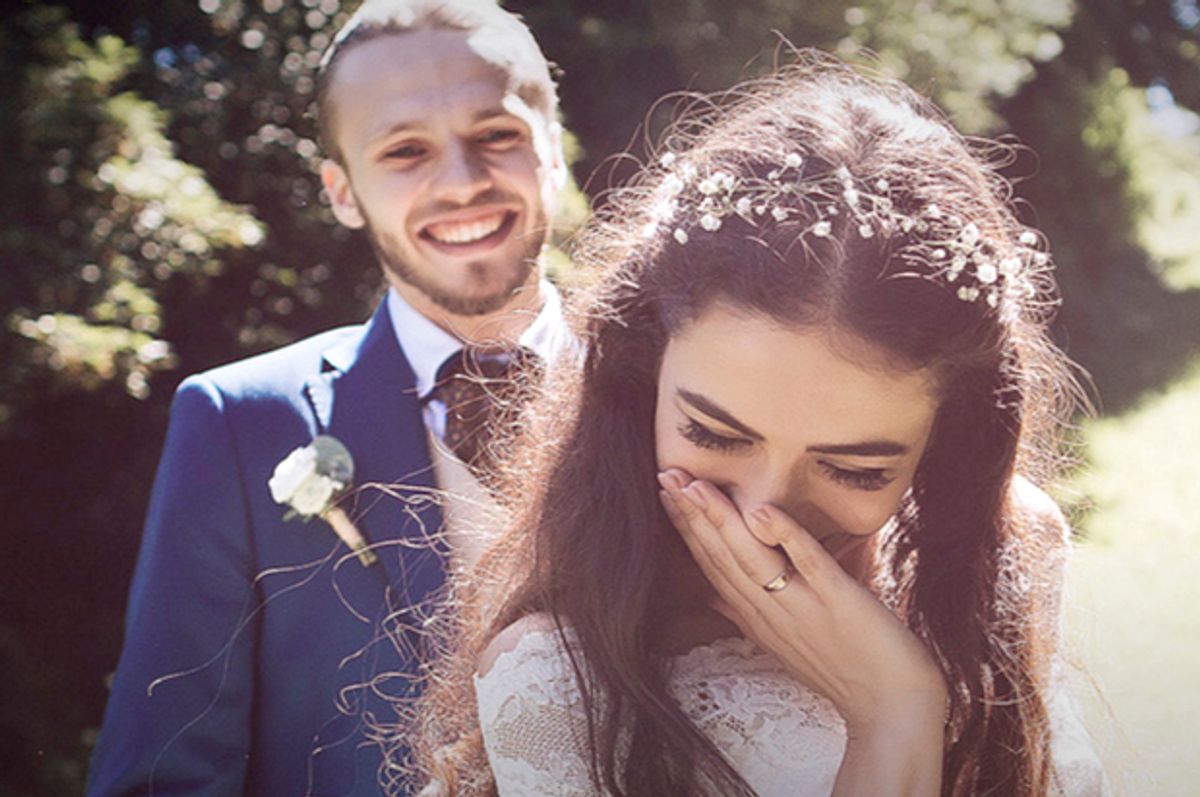 The wedding of Lillian Vilchez and Tom Wilson was marked by a series of bad omens. As his first gift to her, Tom gave Lillian a necklace strewn with real pearls, not knowing that pearls are considered bad luck for a bride to wear in her culture. She's Nicaraguan.

It stormed as she walked down the aisle to join her husband at the altar, where he waited under a flimsy umbrella. She hyperventilated as she took in the puddles forming on the aisle; her veil, heavy with the moisture, became stuck on the ground as she attempted to walk.

This also is the way Lillian and Tom first met.

Yes, Lilian and Tom were complete strangers before stepping before the officiant selected by the producers of FYI’s “Married at First Sight,” the unscripted reality hit that kicked off its fourth season on July 26.

In this unscripted series, three couples agree to be matched by a panel of experts, with the twist that they will marry upon their first face-to-face meeting and let cameras film everything that happens for six weeks afterward. In addition to showcasing Lillian and Tom, Season 4 also features Sonia Granados, a very sweet woman who has married Nick Pendergrast, a man not given to much expressiveness. They seem to be faring much better than Heather Seidel, the flight attendant who married Derek Schwartz, an account executive, and found herself weeping in a deck chair not long after the honeymoon kicked off.

Throughout the production, experts check in on the participants to see how they’re faring, lending support and advice when warranted. At the end of the six weeks, each pair decides whether to remain married or seek a divorce.

In exchange, the public gains a view inside the joined lives of six newly married strangers as they learn about their mate’s family background and personality — not to mention how to pronounce his or her name at the altar.

Many reality series seem to enjoy burnishing their central idea by dubbing themselves “experiments.” But “Married at First Sight” feels like one, in terms of its execution and the effects of the show’s structure on its participants and on viewers.

There is a pleasurable voyeuristic aspect to watching the show and only the smallest part of that involves a lovely stroll through America’s Marital Industrial Complex.

Now it’s true that the couples who agree to meet and wed on “Married at First Sight” do have the chance to enjoy a very nice party that would cost many brides and grooms a fortune.

But unlike other series, where it’s clear that some contestants are simply there to launch their acting careers — or in the case of celebrity participants, extend their time in the spotlight — the people in “Married at First Sight” are nervous, hopeful, vulnerable men and women who are yearning to find someone to share their lives with.

Each has his or her own reasons for seeking out the assistance of the show’s team of experts. This season they include University of Washington sociologist Pepper Schwartz (the only remaining expert from Season 1), Pastor Calvin Roberson and communications and relationship expert Rachel DeAlto. Previous seasons have included a sexologist, Logan Levkoff, and a psychologist, Joseph Cilona. Roberson replaces Greg Epstein as the show’s spiritual adviser.

For their part, the experts and producers select three couples from a pool that can run more than 30,000 applicants. Potential participants have to answer a questionnaire that features hundreds of queries and be interviewed by the experts.

Despite the producers and experts' having undertaken what they profess to be an incredibly rigorous vetting process, even when a team of experts finds suitable matches for these men and women, there’s still no telling if the marriages will work out. And this provides not only the show’s central tension but also an interesting take on the nature of human romance.

For all the background checks and answers about likes and dislikes and the experts' efforts to match strangers based on data, interaction and gut feeling, some of these marriages go terribly wrong. Others begin on rocky ground; in one of the show’s more memorable first-season moments, participant Jamie Otis excused herself to an empty hallway shortly after she said “I do” to Doug Hehner and wept into her veil. The pair is still together, though.

The quest to find true romance and the allure of witnessing the heartbreak caused by that driving mission, has been a major TV entertainment engine since Chuck Barris channeled it into “The Dating Game” in 1965. But that game show, in which single women prodded single men to charm them with bawdy, blue one-liners on national television, represented a turning point. “The Dating Game” begat many series, including MTV’s mid-1990s series “Singled Out” and, starting in 2002, “The Bachelor” franchise – which airs on ABC, like “The Dating Game” did years ago.

“The Bachelor,” for its part, begat “The Bachelorette,” VH1’s “Flavor of Love” and Fox’s “Joe Millionaire” and a slew of other shows too dumb to list here, all of which made the search for love (with Public Enemy's Flavor Flav in "Flavor of Love" and former Poison frontman Bret Michaels in “Rock of Love”) into a prize to be won.

These series have taken the competitive factor in the dating world to ridiculous realms. In contrast, "Married at First Sight" skips the circus elements that can be part of "The Bachelor" and other shows of its ilk. What the show does instead is reveal all the things that can get in the way of two people's forming a lasting bond.

To the show’s credit, out of the nine couples featured during its first three seasons, five chose to remain married after the six-week mark. Two of those couples are still together. That’s a better success rate than that of “The Bachelor,” which only produced one marriage: Sean Lowe and Catherine Giudici. (“Bachelor” Jason Resnick married that season's runner-up Molly Malaney, whom he chose during the “After the Rose” finale after initially choosing Melissa Rycroft.)

On the other hand, a Season 2 couple on "Married at First Sight," Jessica Castro and Ryan DeNino, initially agreed to remain married only to split up horribly, which was revealed during a broadcast of the show’s six-month check-in special. This was followed by Castro's suing DeNino for harassment, menacing and stalking.

And it’s this history, as well as what viewers have seen thus far in Season 4, that shows the flaws in the “Married at First Sight” experiment. People present their best selves in surveys and during interviews, especially if they want a job — and particularly if the job is “spouse.” A repeated motif in every season of “Married at First Sight” is that divorce is not part of the vocabulary, it's not an option and the participants don’t want to fail. This idea is as frequently uttered in this series as the idea of “journeys” are in others, which adds to the fascination and the potential tragedy.

Romance, even when filtered through the mechanics of expertise and especially when exposed to a reality camera lens, is unpredictable. And a huge part of the draw of “Married at First Sight” lies in the chance to read these personalities, guess who isn’t going to make it and cheer for those who look like they will.

This can be somewhat of a psychological exercise for the viewer — odd but not necessarily cruel, as much as it’s a growth experience for the participants.

“Married at First Sight” may initially sell viewers the idea that something so complex can be so easy, with expert intervention and the sense of openness on the part of the participants. But in its own way, the show also provides validation to single viewers who talk about how hard it is to find a love, as well as to married couples who are watching people jump into their ocean before learning to swim.

Lillian and Tom have navigated the first storm together and, as of the most recent episode, appear to be getting along pretty well. Now viewers will just have to see how she takes it when he reveals that he lives on a bus.

I'm pretty sure that wasn’t on the questionnaire.