She did everything by the book, from documenting Depp's rage to donating her settlement — and she's still doubted 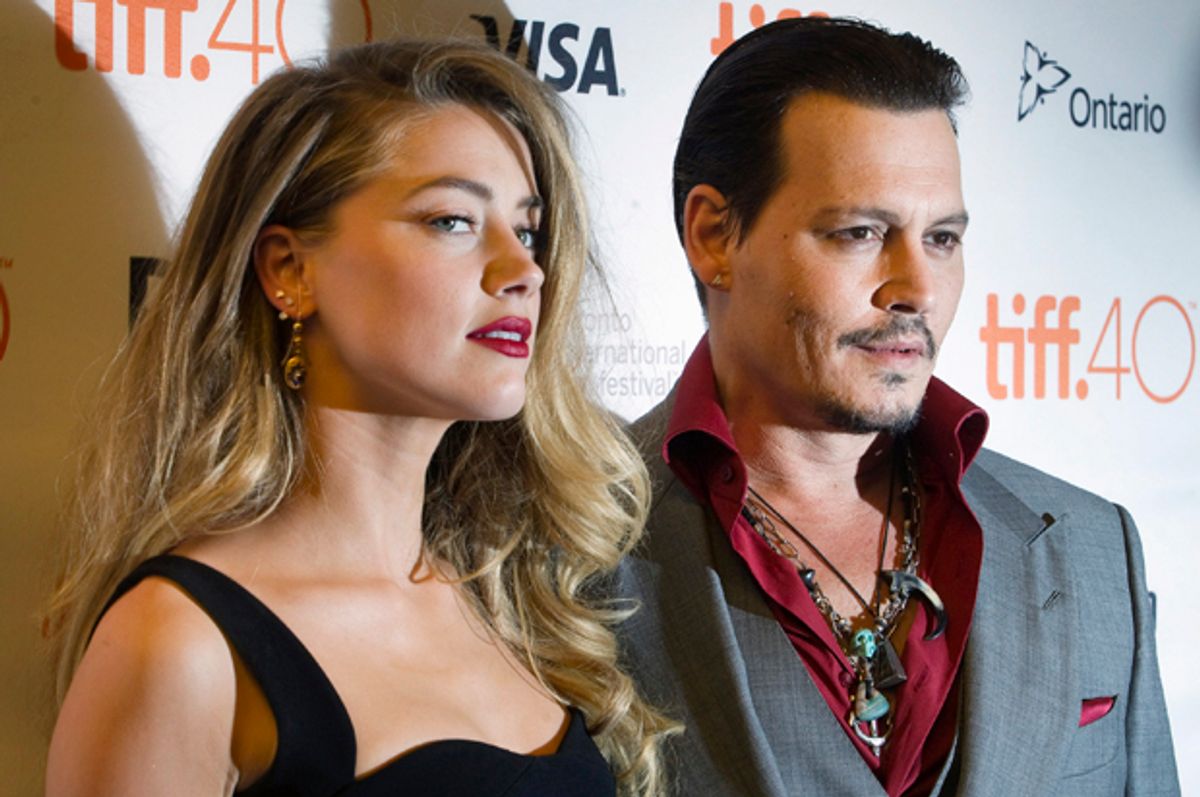 If the internet loves a “perfect response,” Amber Heard has certainly delivered. After receiving a $7 million divorce settlement from Johnny Depp, her ex-husband who she alleges abused her throughout the course of their volatile three-year relationship, the 30-year-old actress donated the sum to charity. A portion of the proceeds will go to a branch of the American Civil Liberties Union that combats violence against women, while the rest will be donated to Children’s Hospital Los Angeles, where Heard has been a volunteer for more than a decade.

“I know these organizations will put the funds to good use and look forward to continuing to support them in the future,” Heard said in a press release. “Hopefully, this experience results in a positive change in the lives of people who need it the most.”

The act was one both of charity and of taking back the narrative. After filing for a divorce from Depp in May and an emergency restraining order, Heard has been publicly branded as a “gold digger,” someone who was alleging abuse only for a quick payday. Oscar-winner Benicio Del Toro referred to the actress as “manipulative” and “twisted,” while Depp’s friend, comedian Doug Stanhope, claimed that Heard was blackmailing her estranged spouse in an editorial for The Wrap. Even Terry Gilliam — yes, the Terry Gilliam — managed to get in a swipe at her.

The redemption she seeks, though, may prove elusive for Heard, as the deck remains stacked against accusers. One can do everything right and still be labeled a liar and a hustler, someone motivated by nothing more than petty greed and malice. Heard did every single thing that people asked her to. Heard was the "perfect" victim — or as close to perfect as it gets.

The shadow of the “perfect victim” crops up in cases like the Steubenville rape or the death of Michael Brown, as any perceived fault of victims are used to insidiously blame them for their assaults, rapes or even deaths. When Brown, a recent high school graduate, was buried in 2014 after being shot by police, his New York Times obit said he was “no angel.” The Times’ John Eligon referred to “public records and interviews with friends and family revealing both problems and promise in his young life.”

These narratives, based on the victims' perceived “mistakes,” are used to destroy their credibility. The Steubenville rape victim, following her 2012 assault, had consensual sex with one of her assailants — simply because she didn’t know what he had done. She had been passed out during the incident. The fact, however, that she engaged in intercourse with him afterward threw her story into question. After all, she was no longer “perfect.”

A certain subtext emerges: Because Jane Doe hasn’t followed a proscribed flow chart of how victims are supposed to behave, she deserves whatever happened to her that night. It’s her fault.

Due to the social stigma and culture of disbelief to which survivors are subjected, many of those who have faced abuse and sexual assault will never come forward. Twenty people are abused by an intimate partner every single minute in the United States, according to the Centers for Disease Control, but most will not report their injuries to police. Many will decline to take their assailant to court. Some will not leave their abusers at all. A study from 2003 to 2007 found that the leading cause of death among pregnant women was homicide, with 45 percent of those murders linked to current or former partners.

Amber Heard, though, was not silent. She came forward. She had corroboration.

When Depp allegedly battered her face, Heard provided photographic evidence of the abuse, her bruises a testament to what she said she experienced. A neighbor signed sworn testimony stating that the May events, as Heard remembered them, took place. According to the witness, Heard was “crying, shaking, and very afraid of Johnny.”

In addition, photographs furnished as evidence in the divorce hearings showed that Depp had severed his finger and dipped it in blue paint to write a message on the wall: “Billy Bob,” referring to “Sling Blade” actor Billy Bob Thornton. According to the claim, the actor believed that Heard and Thornton — who had met in 2004 while filming Peter Berg’s “Friday Night Lights” — were having an affair. There are photos of his bloody finger and the eerie warning that he allegedly painted for his wife.

A separate video taken by Heard further attested to the couple’s toxic relationship. Filmed via a hidden camera, the video shows Depp repeatedly slams cabinet doors in their kitchen while swearing at his ex-wife, who attempts to diffuse the situation in a calm voice. “Motherf***er!” he yells, violently kicking the kitchen counter. He storms around the kitchen, throwing a bottle and slamming his fist on the kitchen table. “You want to see crazy?” Depp says, pouring a glass of wine. “I’ll give you f***ing crazy.” After noticing that the exchange is being recorded, he forcibly rips the camera from her hand and turns it off.

Heard went to the police, but the authorities told her that there was no “evidence” of the encounter. She sought the aid of friends (who also support her claims), but those friends were dismissed as enablers — or even people with whom the bisexual actress might be having an affair. Heard spoke up, but people repeatedly told her that her truth wasn’t good enough, especially when weighed against the testimony of a rich, powerful man with the resources to bury her in the court of public opinion.

At every turn, her claims have been derided. Depp’s legal team argued that the leaked video was “heavily edited” before its release. According to his lawyers, sections of the 2-minute segment show his ex-wife “smiling and egging him on.” The gossip network TMZ has repeatedly accused her of falsifying the claims against Depp, including faking the injuries to her face.

A comment thread on Reddit is an instructive lesson in how those who want to discredit abuse victims will ignore even the most cut-and-dried evidence. “There is a pattern here, Gibson case, many others,” wrote one user in R/MensRights in response to the video. “Female sponges off male, then provokes and gaslights male, secretly records, claims abuse, then money.”

Others have also suggested that the tape indicates that Depp is being used: “I think it's bullshit to judge his anger management on this video. You don't know how persistant [sic] and manipulative women can be. She could've been doing that to him for weeks or months and now he's enraged.”

Even the headline for the thread reframes the incident to favor Depp. Rather than serving as an indication that their relationship was potentially dangerous to Heard’s safety, the tape is seen as proof of the hoax: “Amber heard [sic] being caught by Depp trying to set him up trends on YouTube.”

To go fishing on Reddit, a notorious haven for trolls, might seem like cherrypicking if the site were not also a horribly transparent microcosm of the abuse that Heard has faced from the media in the past four months. TMZ's headline on its report about the "Billy Bob" incident includes a snarky, doubting ellipses rather than a straightforward comma: "Johnny Depp cuts off fingertip in fit of rage . . . Amber claims."

And a write-up from Forbes on her $7 million donation to charity makes fun of her — describing Heard as a nobody and her ex as a washed-up has-been.

“Actress Amber Heard, who you might remember from That One Movie You Slept Through On A Rainy Sunday Afternoon,” wrote the magazine’s Tony Nitti, “and her husband Johnny Depp, who you may remember from Far Too Many Movies You Slept Through On A Rainy Sunday Afternoon, finalized their divorce last week after 15 months of marriage. And let me just say, if a 30-year old, sexually ambiguous, Ayn-Rand disciple and a 52-year old, twice-married, thrice engaged Hollywood leading man can’t make it, then what chance do the rest of us have?”

The abuse allegations are described only fleetingly, as a footnote to the absurdity of Hollywood marriages. But it’s the media’s ongoing treatment of abuse that’s truly absurd. If Amber Heard, who did everything “right,” can’t get a fair shake in the public eye, then what chance does anyone else have?