Judicial Watch vs. Hillary: The conservative group has a long history of spreading Clinton lies 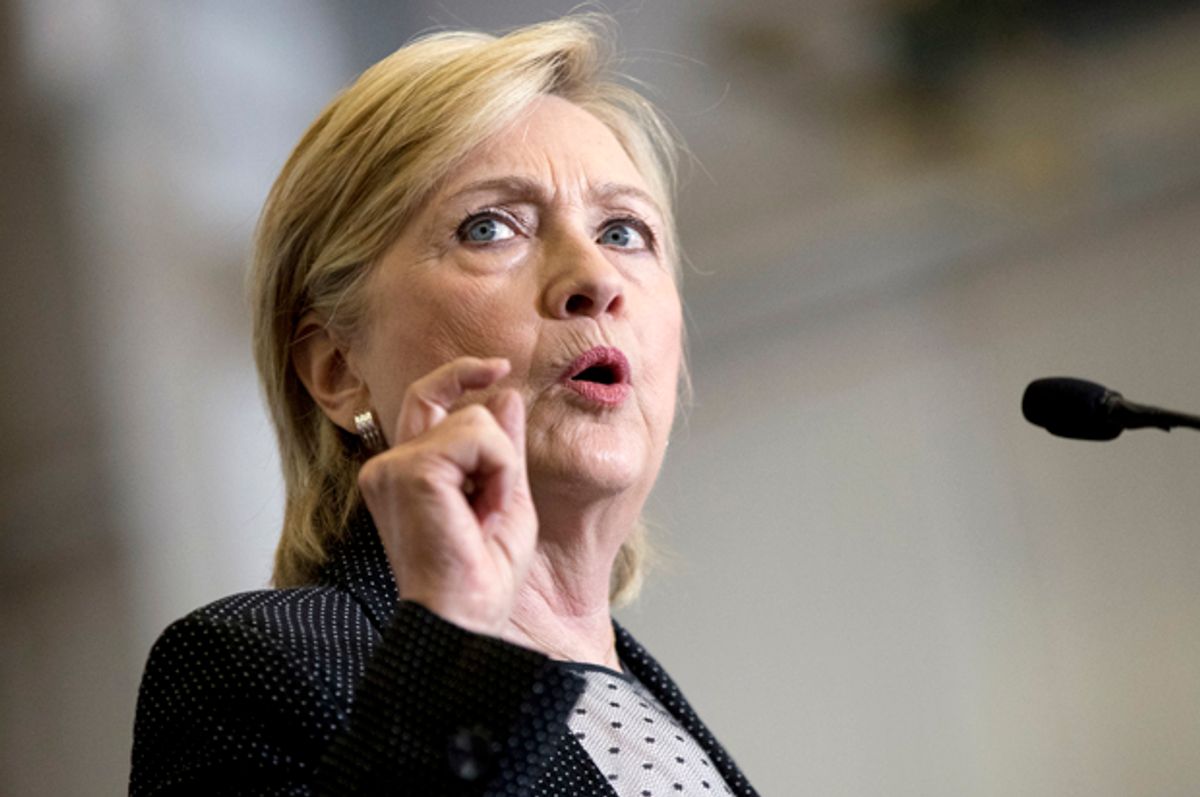 But she was right. And there was some real reporting on it even at the time although, as it was revealed, the Republicans would throw out another shiny object and the press pack would go running in the opposite direction like a herd of gazelles. So it was very difficult to get a handle on the whole story. For instance, this 1999 article by Jill Abramson and Don Van Natta in the New York Times laid out the previously untold story story of the small group of conservative lawyers who concocted the Paula Jones lawsuit and were instrumental in pushing the Monica Lewinsky matter, among other things. As it happens one of those lawyers was a fellow named George Conway, who was not yet married to Kellyanne Fitzpatrick, who is now Donald Trump's latest campaign manager. The Drudge Report drove much of the scandal, and George Conway was believed to have been Drudge's main source, most memorably the story about President Clinton's alleged "distinguishing characteristic" which pundits and commentators gleefully discussed on television for months. It's a small right-wing world after all.

The book "The Hunting of the President" and the new e-book "The Hunting of Hillary," both by Joe Conason and Gene Lyons, finally put together the overall narrative of what happened. But even at the time, it was obvious that there was a concerted effort, funded by millionaire GOP donors, to throw mud on the Clinton administration in an attempt to either get the president impeached or force him to resign. We all know how that ended.

One of the biggest players in the Vast Right Wing Conspiracy was an outfit called Judicial Watch, formed in the early 90s by a conservative gadfly named Larry Klayman. Klayman was a one-man wrecking crew who filed more than 18 lawsuits against members of the Clinton administration costing them millions of dollars in legal fees. The most notable of these was a $90 million invasion of privacy suit filed against Hillary Clinton and others on behalf of the "victims" of Filegate, one of the many scandals for which both Bill and Hillary Clinton were completely exonerated by two different independent counsels. The lawsuit was colorfully described at the time by Jacob Weisberg of Slate:

Klayman has found an opening to harass his political opponents, inflicting costly all-day depositions on Harold Ickes, [George] Stephanopoulos, James Carville, Paul Begala, and many others ... Klayman asks administration officials about whom they date, where they go after work, whether they were expelled from school for disciplinary problems. One 23-year-old White House assistant was interrogated about a triple murder that took place at a Starbucks in Georgetown. Klayman videotapes these depositions, excerpts of which air on Geraldo when Klayman appears on the program, and publishes the transcripts on the Internet. This is in pursuit of a case about the invasion of privacy, remember ... The ultimate goal of the Filegate suit appears to be to inflict this treatment on Hillary Clinton.

That was just one of many Judicial Watch lawsuits, including one in which Klayman sued his own mother for $50,000, that went nowhere. But they did achieve their true purpose, which was to damage reputations, smear political opponents and inflict huge legal fees on anyone who happened to be in the administration.

Klayman left Judicial Watch in 2003 and ended up suing them (naturally.) His recent activity has included a rare righteous lawsuit against the National Security Agency for spying on Americans, and accusations that President Obama is a Muslim who is trying to institute Sharia law. Just this month he added another name to the list of more 80 deaths for which he says Hillary Clinton is responsible. And yes, he's representing two Benghazi families in wrongful death suits against her.

Meanwhile, Judicial Watch has continued its work without him. During the Bush administration they made a couple of half-hearted attempts at bipartisan "watchdog" activity by submitting Freedom of Information Act requests for Dick Cheney's energy task force members and the White House guest logs for lobbyist Jack Abramoff.

The Obama presidency proved to be more fertile ground. Judicial Watch has accused the administration of creating dozens of "czars" that don't exist, and has made a fetish out of lying about the Obamas' travel expenses. This so-called watchdog group has engaged in some truly weird conspiracy-mongering. Via Media Matters:

Judicial Watch claimed that the Justice Department was helping to "organize and manage rallies and protests against George Zimmerman," the Florida man who shot and killed teenager Trayvon Martin. In reality, the unit of the DOJ was sent to Florida in order to defuse tensions in the community, and as the Orlando Sentinel reported, they "reached out to the city's spiritual and civic leaders to help cool heated emotions."

Judicial Watch claimed that the Islamic State (ISIS) had set up a terrorist camp in Mexico "just a few miles from El Paso, Texas," facilitating the smuggling of terrorists into the United States. Conservative media outlets picked up Judicial Watch's claim. Authorities in both the U.S. and Mexico rejected the group's fearmongering.

This is the same Judicial Watch that currently has the press panting over every release of the Clinton State Department emails they've received from their FOIA fishing expedition, rushing on the air and to print based upon the organization's often erroneous and misleading press releases. Tom Fitton, the organization's current president and author of the book "The Corruption Chronicles: Obama's Big Secrecy, Big Corruption, and Big Government" proudly declared, "Judicial Watch has had more success investigating the IRS, Benghazi and Clinton email scandals than any House committee."

Considering the outcomes of the IRS and Benghazi "scandals," it would behoove the press to show a little skepticism. The history of this group is very clear. The first time it waged its campaign of character assassination against Bill and Hillary Clinton, it's perhaps understandable that the press failed to recognize they were being manipulated by political operatives. The trumped-up Obama scandals added up to nothing as well. There's no excuse for the media to fall for it again.