The scandalous truth about CEO severance: Philippe Dauman, Viacom, and the corporate trend of rewarding major failure with major payouts

Viacom's Philippe Dauman bumbled his way to a $72 million payday. Welcome to the era of the "platinum parachute." 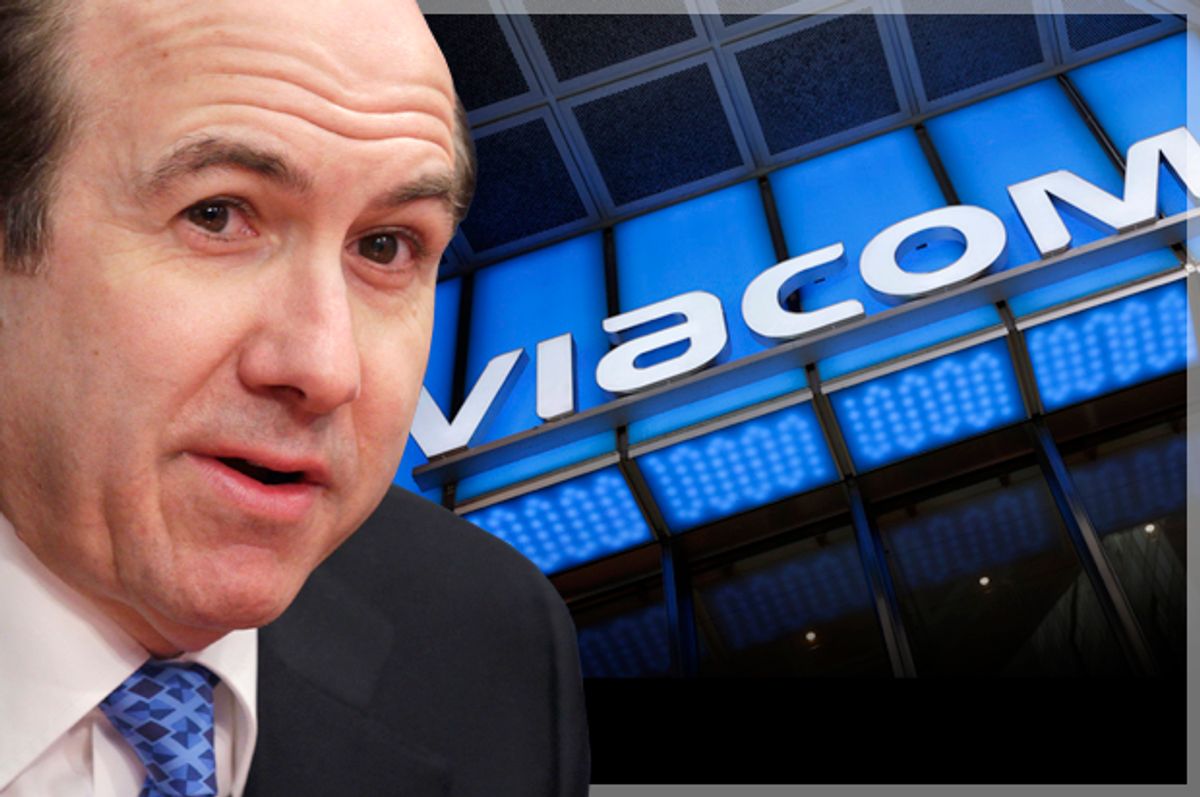 Philippe Dauman’s ouster as president, CEO and chairman of media giant Viacom couldn’t have come sooner for investors who have watched the media company fail to keep up with the times. Amid a nasty battle for control over the empire that geriatric media mogul Sumner Redstone built, Dauman emerged as a potent symbol of poor corporate governance.

Despite Viacom’s failures to react quickly to young people’s embrace of online and mobile content, despite doing little while Netflix and Amazon emerge as content provider and creators, and despite Viacom’s eight-consecutive quarters of declining ad revenue, Dauman is walking away with a severance package worthy of a conquering hero-type CEO — one worth many tens of millions of dollars. His leap from Viacom with his golden parachute comes just months after Viacom announced layoffs at Paramount, MTV, VH1 and Nickelodeon aimed at saving $250 million, or almost a third of the value of Dauman’s severance.

Let's look at Dauman's huge payout: He’s is set to receive a $72 million severance, not including $1.1 million worth of health and welfare benefits, life insurance, office space and a secretary, and $1.9 million in pension-plan related accrued interest, according to a regulatory filing from January 2016. And this comes on top of the $54 million windfall Dauman received in 2011 as a retention payment comparable in value to a CEO exit package and a 20 percent pay raise for the year — never mind that Viacom’s valuation dropped 45-percent over the same period of time.

Dauman’s "platinum parachute" once again raises the question of whether CEOs deserve to be rewarded when their leadership reflects poor company performance. His deal comes three months after Yahoo’s board approved a $55 million severance package for CEO Marissa Meyer should she be ousted in the wake of Verizon’s acquisition. Meyer’s deal comes as Yahoo’s shareholders have seen the struggling search giant’s stock fall by a third over the past year.

Ever since companies began compensating executives with stock option the assumption has gone that CEOs will performer better if their pay is linked to stocks. But a recent study from MSCI ESG Research shows no correlation between stock-based compensation and company stock value. Stock in companies that pay their CEOs at the lower end of the spectrum actually give up better returns than stock in companies with the highest-paid CEOs, the research concluded.

Last year, Dauman earned more than other more successful CEOs. Disney’s stock is up more than 200 percent over the past five years while Time Warner’s shares are up nearly 190 percent. Viacom’s growth in the same period of time? Under 3 percent.

“He [Dauman] was not only being paid a lot, he was paid $85 million last year, which is more than Bob Iger of Disney and Jeff Bewkes of Time Warner combined, and his performance was miserable,” Jeff Sonnenfeld, senior associate dean of the Yale School of Management, told CNBC. “He not only missed the digital revolution but he was killing the great properties that he had.”

Sonnenfeld, who has studied CEO performance, estimates that as much as 15 percent of a company’s stock value can be attributed to the decisions and leadership skills of their chief executives.

“The principle of the golden parachute is a sound principle,” according to a 2012 Harvard Law School study of golden parachutes. But, “in our view, what went wrong was that the principles were applied too widely,” in the severance packages reviewed by the research.

The researchers concluded that so-called “Say on Pay” rules enacted under Dodd-Frank that went into law in 2010, which gives shareholders opportunity to express the concern over executive compensation, will help make board directors accountable to how they negotiate severance packages. But more than five years after the enactment of Dodd-Frank rules, CEOs are still walking away with immense severance packages despite poor performance. It’s going to take more than some disgruntled shareholders — and their non-binding annual votes on executive pay — to change that.