Trump in Virginia: The GOP nominee fights a losing battle in the Old Dominion

Salon on campaign trail: Trump visits Virginia, where victory looms only in the minds of his die-hard supporters 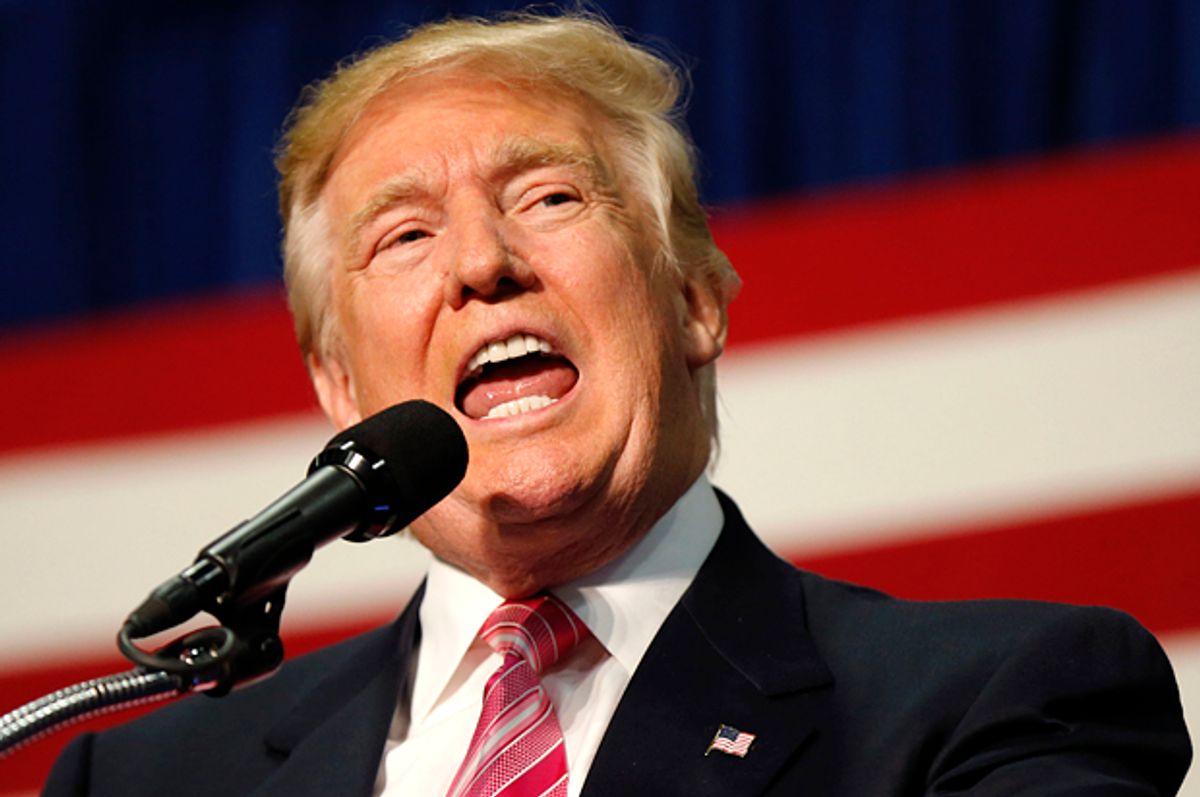 Donald Trump was in Virginia this past weekend, and at this point I’m not entirely certain why. The commonwealth was a reliably purple swing state in 2008 and 2012, with the GOP’s longstanding grip on Virginia’s modest cache of electoral votes weakened by the increasingly liberal DC suburbs and reliably Democratic urban centers like Fredericksburg, the site of Trump’s rally. But this election cycle, Virginia’s looking pretty damn blue – the most recent polling average has Hillary Clinton leading Trump by double digits. If you believe that Trump can turn it around and win this thing, then spending time in Virginia is probably a good idea. But with a deficit that large this late in the cycle, you have to start wondering why anyone would believe that.

For Trump’s Virginia faithful, though, victory in the state seems like a certainty, or at least a strong likelihood, irrespective of what the polls or the media have to say about it. “I believe he will” win Virginia, said Bob, a burly retiree from Fredericksburg who puts more stock in the pro-Trump vibe he feels in his community than he does the polls. “When you hear your friends talking, and neighbors, and they’re all saying the same thing, something doesn’t jive.” That sentiment was shared by Wendy, a 39-year-old small business owner. “I think that the liberal media has a way of skewing everything, so, you know, we’ll see. Come voting time, we’ll see what happens.” When I asked Mitchell, a 22-year-old in the hospitality industry, why he believed Trump would win Virginia when the polls looked so bad, he said: “an inkling.”

That faith in Virginia’s electorate is siphoned directly from their faith in Trump himself, which seemingly can survive any Trump-made controversy. Very few of the people I spoke to described feeling any sort of disagreement or disquiet with any of the inflammatory things Trump has said. “I look at it this way,” said Haskell, a 67-year-old retiree from Fredericksburg, “put on your big-boy pants and grow up. All of the cupcake, safe places, gun-free zones, all that crap, all that’s doing is inviting trouble in.” One Fairfax man who declined to give his name but was wearing a magnificent “Chinese Americans For Trump” t-shirt offered a more philosophical defense of his candidate. “I know sometimes he says things [that] might be offensive to some people, but I would definitely look at his heart,” he said. “If his intention was to offend people, then that’s different.”

If any of Trump’s fans showed up anticipating some of that over-the-top rhetorical bombast, they left disappointed. Trump was noticeably scripted and stuck pretty faithfully to prepared remarks that were stuffed with familiar Republican talking points and randomly inserted statistics that sounded all the more out of place coming from the mouth of someone who has long asserted the superiority of personality over data. “We are going to win this state, so important,” Trump promised in his grammatically unique way before launching into his plan for turning the commonwealth of Virginia into an economic superpower.

His pitch came down to “coal,” basically. “I visited the hardworking coal miners in this state, and they are hardworking and they love being coal miners,” he said, lavishing praise on a vanishing energy industry that is concentrated in the southwestern part of Virginia (many, many miles from Fredericksburg). Coal production has been steadily declining in Virginia for about three decades, as has the number of coal jobs: in 1984 there were more than 14,000 mining employees in the state, but by 2014 that number had shrunk to just over 3,700. As such, coal no longer has the political heft in the state that it once did – the current governor, Terry McAuliffe, campaigned on environmental themes and easily weathered a determined “war on coal” assault from Virginia Republicans. The Trump plan for victory in Virginia seems to rely on somehow resurrecting the political and economic power of a dying industry.

Trump also made another appeal to African-American voters, who made up 20 percent of the Virginia electorate in 2012. “In recent days, across this country, I’ve asked the African-American community to honor me with their vote,” Trump said. His argument for why black voters should support him seemed to rest on two key points: Abraham Lincoln was a Republican, and Hillary Clinton is a bigot. “We reject the bigotry of Hillary Clinton,” Trump said, “who sees people of color only as votes, not as human beings worthy of a better future.”

It’s not a good pitch to begin with, and Trump undermined his own cause by attacking Terry McAuliffe’s high-profile campaign to end felon disenfranchisement within the state. “Hillary Clinton is banking on her friend Terry McAuliffe to get thousands of violent felons to the voting booths,” Trump snarled. “They are letting people vote in your Virginia election that should not be allowed to vote.” Felon disenfranchisement started in Virginia as an explicitly racist policy meant to capitalize on racial inequities in the justice system to strip political power from African Americans. Not surprisingly, this Jim Crow remnant disproportionately affects black Virginians.

So Trump’s pitch to Virginia voters isn’t really all that good, which makes sense, given that he’s a bad politician. The gut feelings and intuitions of his most fervent supporters may tell them that the state is nothing short of a lock, but if he does somehow win Virginia, it will be despite the polls and his own best efforts.