From booster to adviser: Sean Hannity has erased his final, albeit microscopic, sliver of impartiality 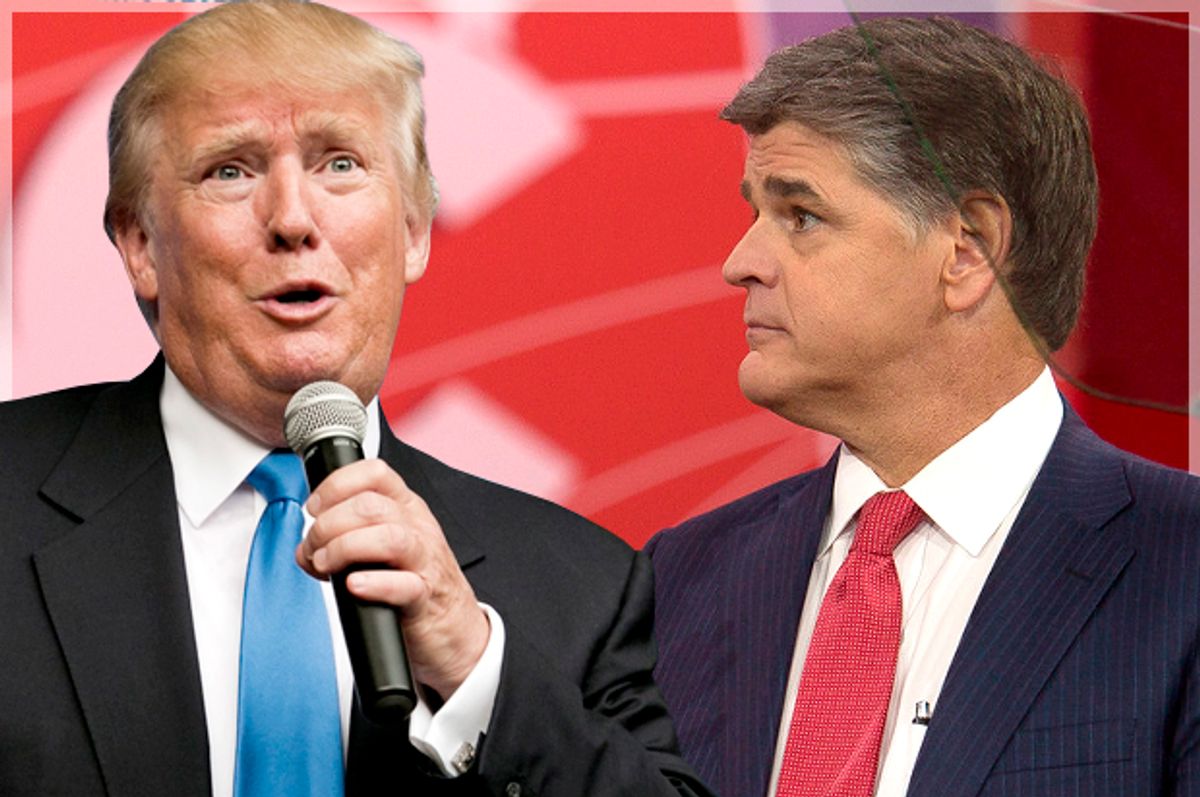 Today in Austin, Texas, Republican presidential nominee – it still feels weird to type this – Donald Trump will tape a two-hour interview with his trained news poodle Sean Hannity. The event will likely entail 120 minutes of the Fox News host offering the sentient tangelo peel open-ended softball questions from which Trump can spin out extended rants about every conspiracy theory and nasty, subversive rumor he has ever heard about Hillary Clinton, egged on by the chuckles of the live audience brought in for the private, closed-to-the-press affair.

There is nothing new about Sean Hannity playing lapdog for a conservative political figure. Still, The New York Times’s media columnist, Jim Rutenberg, published a piece over the weekend endeavoring to show just how deeply enmeshed with the Trump campaign Hannity has become.

In Rutenberg’s formulation, Hannity has not only been “Trump’s biggest media booster; he also veers into the role of adviser,” giving Trump and his team advice on media strategy. He has recently used his show to probe Clinton’s health, the latest conspiracy theory to crawl out of the muck of the right-wing fever swamps. Trump has appeared on Hannity’s primetime Fox News program more often than any other, and for his trouble had been greeted with “interviews” so soft and fluffy you could wrap yourself up in one and take a nice nap.

[A]pparently feels free to work in the full service of his candidate without having to abide by journalism’s general requirements for substantiation and prohibitions against, say, regularly sharing advice with political campaigns.

Eric Wemple of the Washington Post agrees, and also tries to work the shame angle.

Fox News sells itself as news. Therewith comes some expectation of honest brokerage and ambient skepticism, an expectation that Hannity disappoints every night.

Not that Hannity cares. As he told Rutenberg, “I never claimed to be a journalist.” Which, to be fair, is not a claim anyone else has ever made about him either.

Observing that Fox News is a propaganda arm of conservatism and the Republican Party is not exactly new. And Hannity may genuinely believe – probably truly believes – that Trump would ring in a golden age of conservative policy and thought, pushing the entire country to the right. For all I know, he has a Trump shrine in his house, right next to the eternal flame burning forever in front of a Ronald Reagan statue glazed with pomade.

With all due respect to Rutenberg and Wemple, though, what their formulations assume is that Sean Hannity cares, or even should care, about such notions as professional integrity, journalistic or otherwise. He clearly does not. If he did, he wouldn’t be citing articles from the Gateway Pundit in his probes of Clinton’s health. (If you are unfamiliar with the “journalism” practiced by the Gateway Pundit, here are some Google results for “Stupidest Man on the Internet.”)

Hannity is a media personality for whom stardom and being beloved by fans are the ultimate goals. He has all the intellectual grounding of a dead fish stuffed into a Super Bass-O-Matic. Sure, he’s conservative, but you get the sense watching his bloviating that the political ideology is less important to him than having rich and powerful people like him. As long as he can refer to Newt Gingrich as “a very close friend,” as long as he has bragging rights among Fox hosts for who gets the most attention from Trump, he’s in heaven.

After all, look at what happens to Fox News personalities who get on Trump’s bad side. A year ago the mogul famously clashed with Megyn Kelly just as her show was becoming the top-rated draw in Fox News’s primetime lineup and media observers pegged her as the top dog at the network. Since then, her show has struggled in its time slot. While it still does well, it is not the destination for election news some thought it was about to become. By this summer, Hannity was beating her in that key 25-54 demo that advertisers love.

At the time of the clash with Trump, Hannity, among other figures at the channel, offered what could best be described as tepid support for Kelly. Now her ratings are down and he is the number-one favorite of the Republican Party’s presidential nominee.

What Hannity has done, wittingly or not, is stake his future on the ascendancy of Trumpism in the GOP and its staying power. He clearly had no problem jettisoning any sense of journalistic integrity in making this bet, if he spent even a minute wrestling with it in the first place. Which, given the history of his entire career, is highly doubtful.