Trump slams President Obama as he arrives in Louisiana to tour flood damage: "Too little, too late"

"President Obama should have gone to Louisiana days ago, instead of golfing," Trump tweeted Tuesday 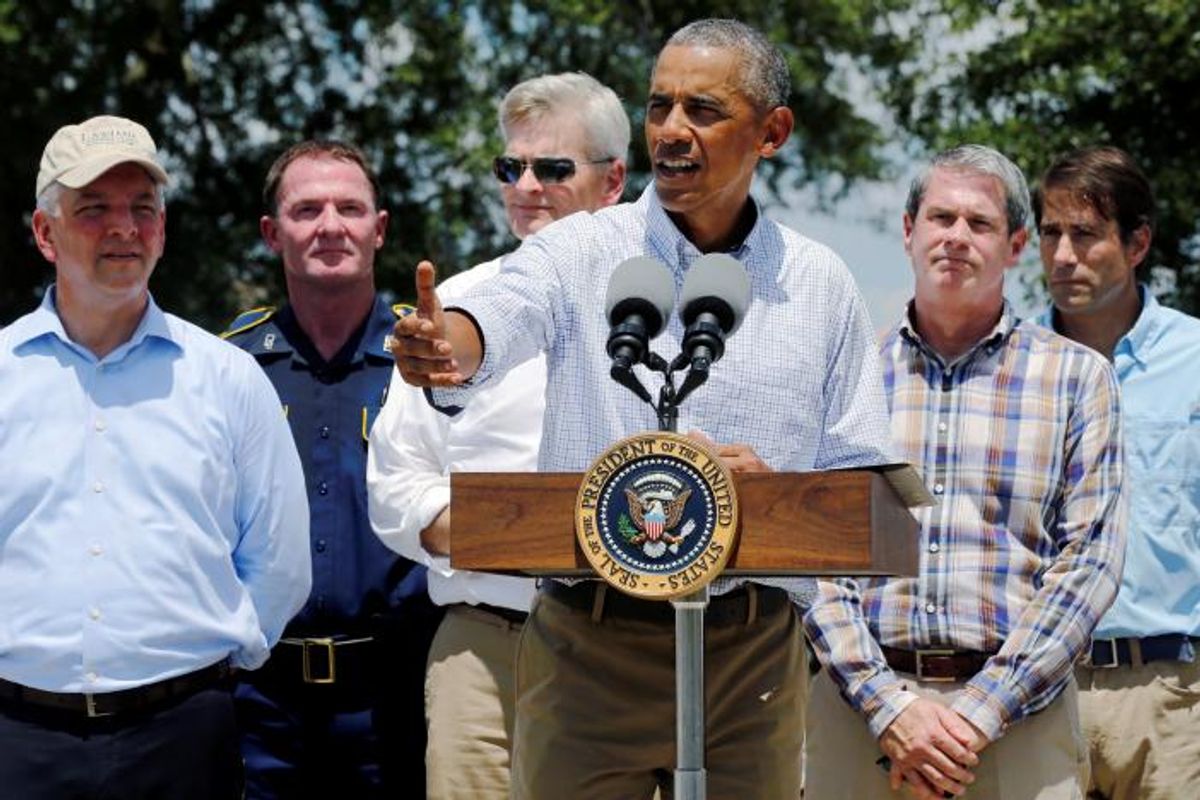 In a release issued late last week, the American Red Cross said the flooding in Louisiana is the worst natural disaster in the U.S. since superstorm Sandy and that the relief effort will cost at least $30 billion. More than 100,000 residents have registered with the Federal Emergency Management Agency for assistance and at least 13 deaths have been attributed to the massive flooding.

While President Obama was greeted at Baton Rouge's airport by Louisiana Governor John Bel Edwards, Lt. Gov. Billy Nungesser and the state's U.S. Senators Bill Cassidy and David Vitter, to visit the storm ravaged region on Tuesday, Trump tweeted his criticism of the delayed visit, saying "President Obama should have gone to Louisiana days ago, instead of golfing":

"The president says he doesn’t want to come, he is trying to get out of a golf game,” Trump told volunteers last Friday at a church he toured north of Baton Rouge, according to a report from ABC News. "He will never be under par." Trump's son, Eric, credited his father's visit to Louisiana last week with shaming the president into finally planning a trip of his own.

The White House said Obama received regular briefings on the flooding even while on his annual vacation in Martha's Vineyard. And Obama declared a major disaster for Louisiana on August 14, making federal resources available to help with home repairs, temporary housing, low-cost loans for uninsured property losses and other programs to help individuals and business owners recover. He subsequently dispatched FEMA Administrator Craig Fugate and Homeland Security Secretary Jeh Johnson to the region.

Governor Edwards, a Democrat, said he had no problem with Obama’s decision to delay a visit to the flood area. A presidential visit and the accompanying motorcade, Edwards said last Thursday, would pull first responders away from relief efforts, put a strain on law enforcement and force road closures.

Trump’s visit was initially criticized by the staff of Edwards, but the governor eventually praised Trump’s visit as helpful in an interview with CNN over the weekend.

"Let me just remind folks: sometimes once the floodwaters pass, people's attention spans pass. This is not a one-off," the president said after touring the damage in Zachary, Louisiana. "This is not a photo-op issue. This is how do you make sure that a month from now, three months from now, six months from now people still are getting the help that they need."

The president also praised FEMA for its efforts coordinating a federal response, which he said has already reached $127 million in assistance.

"Now, federal assistance alone won't be enough to make people's lives whole again so I'm asking every American to do what you can to help get families and local businesses back on their feet," Obama said.

Democratic presidential nominee Hillary Clinton has not been to Louisiana but said Monday in a statement she will visit the state sometime in the future.

“I am committed to visiting communities affected by these floods, at a time when the presence of a political campaign will not disrupt the response, to discuss how we can and will rebuild together," she said.

Visit volunteerlouisiana.gov to learn how you can help families and local businesses in Louisiana recover.