No bull — AI investing is coming to Wall Street 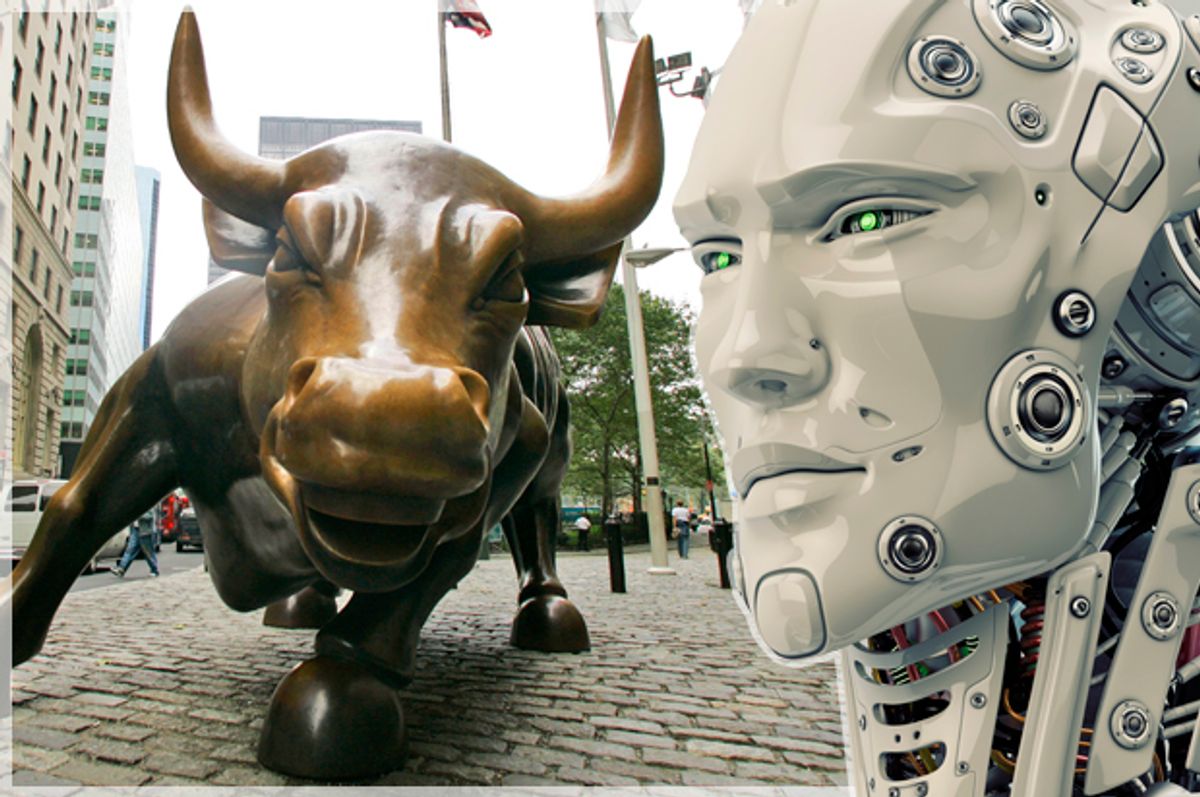 Artificial intelligence has held great promise for decades now. Since the 1950s, experts have been predicting  that the day when computers would think like humans was just around the corner. But creating a sentient machine isn't so simple. By the 1970s, as one system after another failed the Turing Test, artificial intelligence research fell out of favor — the hype largely deflated by the influential book “Perceptrons,” by Seymour Papert and Marvin Minsky.

Recently, however, a series of advances in computing and so-called machine learning has triggered renewed interest in the potential of artificial intelligence. And while computers might not (yet) be self-aware or able to think like human beings, they becoming very good at learning how to diagnose diseases, find and defend against malware — and beat humans at games of chess and Go.

Now they are learning how to make advanced investment decisions.

Alexander Fleiss, co-founder of Rebellion Research, a small New York- based hedge fund founded in 2007 that manages $30 million in assets for hundreds of clients worldwide, uses AI to root out undervalued companies across the globe for his firm. The artificial intelligence recommendations consistently outperform the broader markets. “Our AI monitors data from 53 countries at the same time on a daily basis,” Fleiss told Salon. “So if it sees strength in the Japanese consumer, it will look at companies in Japanese consumer goods to find which ones are the best investments based on their enterprise value to EBITDA," he said, referring to earnings before interest, taxes, depreciation and amortization.

We're in a moment when tech giants like Apple, Google and Facebook are pushing the envelope on AI  by aggressively pursuing acquisitions, such as Apple’s recent $200 million purchase of Seattle-based machine-learning startup Turi. Silicon Valley has quickly deployed AI in everything from facial-recognition software (Facebook) and Google’s search algorithms (Google) to Siri (Apple). When it comes to using this technology to make investment decisions, the long-resistant finance industry is slowly starting to catch on.

Japanese hedge-fund manager Yoshinori Nomura recently told Bloomberg his self-learning computer program had accurately predicted the outcome the results of June's Brexit referendum, in which Britons voted on whether to leave the European Union. While months of political polling showed the “remain” side would prevail, Nomoura’s artificially intelligent fund-management program initiated trades that day that went against the prevailing sentiment of human traders in Tokyo. “The machine was right after all,” he said of Simplex, the computer he has been training to identify trends for use in investing.

Nomura watched as Simplex, in charge of $35 million of client money, zigged while everyone else zagged, selling Japanese stock futures when human traders were buying them on the assumption that Britain would remain in the EU. Simplex, immune to the herd mentality, outmaneuvered the traders and hedged against an eventual downturn in stocks. Sure enough, after the Brexit results were announced, the Nikkei index saw its biggest drop in five years, while Nomura’s fund ended the day 3 percent higher.

Babak Hodjat, co-founder and chief scientist at Sentient Technologies, the world’s largest AI company, outlined three reasons why artificial intelligence is starting to make inroads into fund management: Computing is cheaper and more accessible, algorithms have become more complex and capable of taking advantage of this immense computing power, and data is more readily available than ever before. These factors explain why machines are far better and faster than humans at identifying patterns and trends in data.

Hodjat said artificial intelligence can measure the probability of a particular outcome in the markets in part by monitoring book orders – the lists used by traders that show interested buyers and interested sellers of securities, including their asking and bidding prices – and rapidly detecting patterns of behavior that humans could easily miss. And therein lies the power of AI right now.

Simplex "wasn’t predicting the outcome of the Brexit vote; it was simply identifying subtle trends in the market,” Hodjat told Salon. “The machine could have look at this book-level data and watch orders come in or get cancelled at split-second intervals. It can also test its probabilities by putting out an order and seeing if it gets filled or not at prices. The important thing is the volume of data the machine can process quickly.”

Of course, this technology isn’t foolproof, as it assigns probabilities only to outcomes. The important thing here is the correlation between the amount of data and AI's performance. Today's AI is better because it has more and better information than ever from which to learn. As the volume of available data has skyrocketed, it has provided more chances for artificial intelligence to process and assign probabilities, as well as more opportunities to tweak and improve outcomes in far less time.

“I don’t know how AI in financial services will pan out in the future, but we have to acknowledge the positive side of this,” Hodjat said. “Will there be mistakes?  No doubt. But 20 years ago you have to call a guy to buy 1,000 shares of IBM and he took time to call you back. Now it all happens almost instantly.” The same goes for AI's learning curve — and the ability to perform trial and error at the speed of thought comes awfully close to the original promise of artificial intelligence.