"You're supporting a bigot. That makes you part of the bigotry." Charles Blow's master class in cutting through Trump hackery 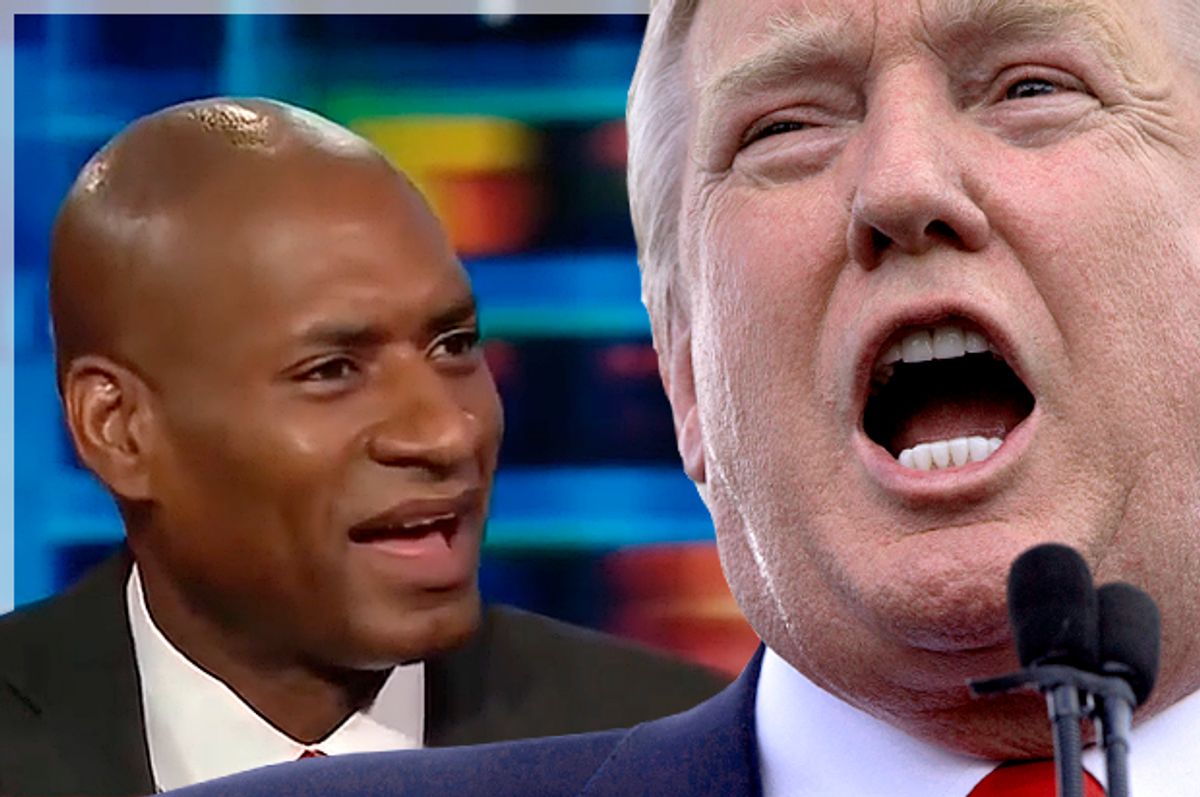 Donald Trump’s ascendance to power over the Republican Party was made possible by how he outmaneuvered the American corporate news media. As I explained in an earlier Salon piece, Donald Trump, with his background in reality TV and professional wrestling, created a spectacle that rewarded him with at least $3 billion in free media coverage. Trump’s sophisticated meta game also allowed him to exploit a risk-averse news-media establishment that operates according to a clear and predictable set of rules and conventions governing “the boundaries of the approved public discourse.”

These rules and conventions consist of maintaining the appearance of “objectivity” and “fairness,” perpetuating a “both sides do it” framework when discussing Republicans and Democrats, and an obsessive need to present “all sides of an issue.” Clear statements of fact and truth are treated as mere opinions though as Paul Krugman once said, “if one party declared that the earth was flat, the headlines would read 'Views Differ on Shape of Planet.'”

The American corporate news media also prefers to feature generalists who understand these rules as opposed to real experts who will not obey said script. Ultimately, in covering political campaigns and elections, the American corporate news media is more interested in reporting about the “horse race” — because it is an easy story to communicate — than in critically evaluating the specific policy proposals and qualifications of a given candidate.

When confronted by the Donald Trump phenomenon, the American corporate news media was flummoxed by his disregard for facts, inconsistency and willingness to rapidly change his positions on a given issue, overt racism and bigotry of his followers and movement, fascism-fueled hostility and contempt for journalists, and utter disregard for the rules of normal politics. Media elites and other opinion leaders were paralyzed in an act of political rubbernecking while Trump pummeled and mocked them all the way to the literal and metaphorical political bank.

On Monday’s edition of “CNN Tonight with Don Lemon,” New York Times columnist and author Charles Blow refused to comply with Donald Trump’s political con job and an American corporate news media that has acted irresponsibly in aiding and abetting his presidential campaign. In an exchange with Donald Trump’s minion Bruce Levell, Charles Blow did not allow Trump’s clear pattern, habit and strategy of racism and bigotry to be obfuscated or repackaged.

As detailed by a transcript from CNN:

BLOW: And I know a bigot when I see a bigot. And you are supporting a bigot and that makes you part of the bigotry that's Donald Trump.

LEVELL: I know someone who doesn't tell the truth on national TV when I see it, sir.

BLOW: Right. And I know this. A bigot is a bigot. You're supporting a bigot. That makes you part of the bigotry. And you are part of the problem that black America faces. That what black people don't need is not somebody to solve our problems like we are some sort of algebraic equation. What black people need is dismantling . . .

LEVELL: . . . you can't sit on national TV and call someone a racist, sir.

BLOW: Yes, I said that to you.

Charles Blow conducted a master class in how best to derail Donald Trump’s news-media con job. Blow was direct, unapologetic, did not concede any territory of agreement or compromise and clearly communicated how Trump’s behavior and policies are racist and that by implication his supporters are as well.

Charles Blow also used the racial optics of his segment on CNN to great effect. Donald Trump, like other Republicans, deploys black conservatives as human mascots to deliver some of his most toxic, offensive and racist policies. This is a cynical attempt to leverage the symbolic moral authority of African-Americans to deflect and defuse any suggestion that Trump and other conservatives are racists or that their policies will have a negative impact on nonwhites. Because Don Lemon, Bruce Levell and Charles Blow are all black men, Levell was not allowed an easy out or pivot.

In social psychology, the bystander effect is a phenomenon whereby a group or crowd of people will often ignore an individual person who is in distress. This dynamic changes when a member of the crowd or group decides to render aid to the person in distress. Other people will then follow the new rule — what is now one of care and concern — instead of ignoring and looking away.

On Monday’s edition of “CNN Tonight with Don Lemon,” Charles Blow established a new rule for how journalists and other commentators should interact with Donald Trump’s agents and rabble. Blow is one of the few prominent voices who have consistently refused to legitimize or excuse-make for Donald Trump’s political campaign of bigotry, racism, nativism and lies. The question now becomes, Will other members of the Fourth Estate follow Charles Blow’s lead and the new rule that he has tried to establish or will they continue to be supplicants for Donald Trump?