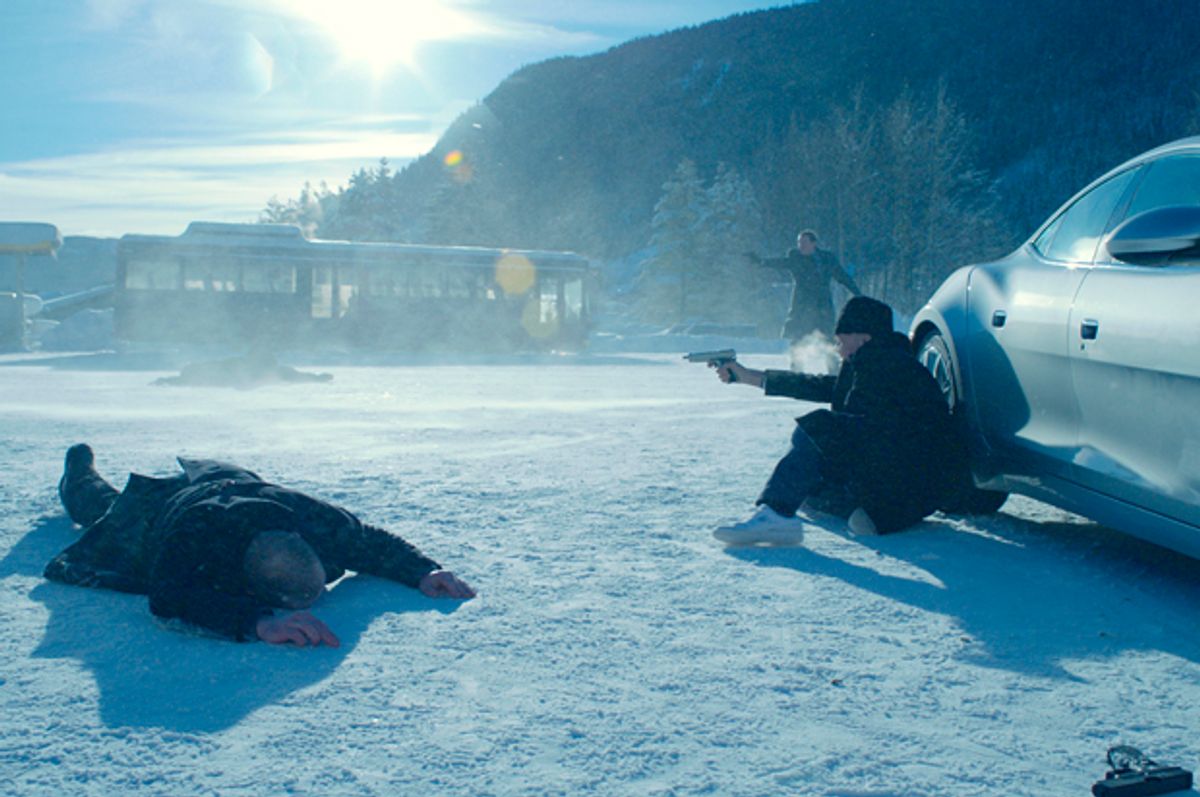 "In Order of Disappearance" (Trust Nordisk)
--

Describing Norwegian director Hans Petter Moland’s violent black comedy “In Order of Disappearance” as an Arctic version of “Fargo” is in the ballpark but doesn’t go nearly far enough. I feel confident that Moland is a big fan of the Coen brothers and would cheerfully admit their influence on his work. But he’s a filmmaker with a sharply nuanced and highly precise vision, and this is no mannered Americanophile homage. As anyone who saw Moland’s 2010 cult hit “A Somewhat Gentle Man” (which like "In Order of Disappearance" stars the magnificently deadpan Swedish actor Stellan Skarsgård) already knows, he pushes beyond Coen territory into a distinctive Nordic blend of absurdity and surrealism, where Hollywood crime thrillers of the 1970s meet the contradictions of the decaying welfare state and the winter light of an Ingmar Bergman film.

Certain moments during “In Order of Disappearance” seem to occur in a Tarantino-style universe of random cultural byplay and bizarre parenthetical scenes. While waiting to kidnap a member of a rival gang, two middle-aged gangsters discuss their vision problems, arguing over which of them needs new glasses most. The film’s thoroughly odious villain, a preening, ponytailed Norwegian crime lord known as the Count (Pål Sverre Hagen), is a vegan health nut, constantly blending organic-juice concoctions. My favorite of these interludes comes when one Serbian gangster tells another how great Norwegian prison life is. “You’re in for a treat,” he says, with no hint of irony: The food is good, there are no rapes, dental work is on the house. “No raping, and the guards are nice to you?” his colleague responds. “You’re fucking with me.”

This mood of genial boredom feels more like text than subtext or background; Moland’s real subject is perhaps the cognitive dissonance of 21st-century life in the Scandinavian social democracies, which can no longer entirely insulate themselves from the outside world. Those episodes, meanwhile, are woven around a Charles Bronson-style revenge plot and a misbegotten small-town gang war that significantly reduces the criminal population of central Norway.

Moland’s title for the movie is hilariously literal-minded: There's an on-screen intertitle every time one of his characters is dispatched to the next world, featuring the guy’s full name, gang nickname and religious signifier, as on a military tombstone. Some get plain Lutheran crosses, while others receive the more ornate Serbian Orthodox version. One guy gets a Star of David. The gag becomes increasingly abstruse until . . .  but let’s leave some surprises. The Count appears to believe that his Serbian adversaries are actually Albanian Muslims or, as he puts it, “Mohammedans,” who engage in imaginative sex acts with animals. His subordinates find this counterfactual bigotry troubling but soon discover that it’s unwise to discuss the subject.

In his previous role with Moland in “A Somewhat Gentle Man,” Skarsgård (best known to mainstream audiences as astrophysicist Erik Selvig in the Marvel universe) played a crime-movie staple: the paroled killer who longs to go straight but is dragged reluctantly back into a life of crime. This time around he plays another archetype, more or less an inversion of the first one: the model citizen turned murderous vigilante. (Both films were written by Kim Fupz Aakeson.) Nils Dickman — whose last name apparently incites the same degree of juvenile humor in Norwegian as it would in English — is a snowplow operator who keeps the only road open between his remote village and the outside world. The local leader of the “Farmers’ Centrist Party” hopes Nils will run for office, as a representative of successful immigration. (I’m pretty sure Moland understands that presenting a Swede living in Norway as an “immigrant" is likely to strike outsiders as ludicrous. And I don't think there's actually a Farmers' Centrist Party.)

Nils has literally just been named Citizen of the Year and has given an awkward speech at a town banquet, when his adult son turns up dead on a park bench in a nearby city, supposedly after a drug overdose. But Ingvar wasn’t a drug addict, Nils assures the supremely bored cop assigned to the case. Barely bothering to make eye contact, the officer tells him, “Sadly, all parents say that.” Faced with unpalatable options — acknowledging that either he knew nothing about his only son or a terrible crime has been committed and no one cares — Nils retreats into his workshop with the intention of killing himself. He literally has the barrel of a hunting rifle in his mouth (removing it with an audible swack) when a chance encounter with one of Ingvar’s friends introduces a third option: He can hunt down the people responsible for his son’s death and kill them off one by one.

Moland possesses the rare ability to take a story where the viewer knows almost exactly what will happen and make it surprising. Nils’ career as rural hick-turned-Angel of Death is sometimes gruesome, sometimes noble and very often — if you have exactly the right sort of sensibility — a lot funnier than it ought to be. Sometimes he causes the death of treasonous and terrible people through complete incompetence, as when he pays a hit man’s entire fee up front, inducing the hired killer to betray him to the Count — who concludes, reasonably enough, that a person who can’t be trusted to fulfill a bargain is not trustworthy.

Of course, Moland also has Skarsgård, an actor who can display a range of emotion from murderous rage to bottomless grief and immense tenderness without ever appearing to alter his implacable expression. For reasons I won’t explain, at one point Nils finds himself obliged to read a bedtime story to an 8-year-old boy, and the only text he has available is the sales brochure from a manufacturer of diesel-powered snow-removal equipment. (Needless to say, it proves to be an excellent choice.) Skarsgård is very nearly matched here by the magnificent German actor Bruno Ganz, playing the hoarse-voiced, bloody-minded Serbian godfather known only as Papa, who is the Count’s great nemesis.

Given this film’s subject matter and its parade of ghoulish death scenes, it’s important to make clear that the on-screen violence is pretty mild by American standards. And “In Order of Disappearance” possesses both a striking soulfulness and a sense of beauty. (Much of the credit goes to cinematographer Philip Øgaard, whose images are memorable but never showy.) Repeated scenes in which Nils flings his victims (wrapped in chicken wire) over a remote waterfall are not played for laughs in the slightest. It definitely doesn’t pay to grow too attached to any of the participants in the gang war, even the ones with appealing personal histories, but Moland is also clear about where the killing must stop: No unaffiliated civilians, children or dogs. He also knows he can’t put two of the greatest living European actors (Ganz and Skarsgård) in a movie without finally giving them a terrific scene together — one in which neither of them says a word.

"In Order of Disappearance" opens this week in Los Angeles, New Orleans, New York, Ottawa, Toronto and Vancouver. It opens Sept. 2 in San Francisco and Washington; Sept. 9 in Atlanta, Boston, Denver, Gainesville, Fla., Minneapolis, Philadelphia and Boise, Idaho; and Sept. 16 in Seattle, with other cities to follow. The film is also available on demand from cable, satellite and online providers.