"Thelma & Louise" turns 25: "It's depressing how relevant it is" 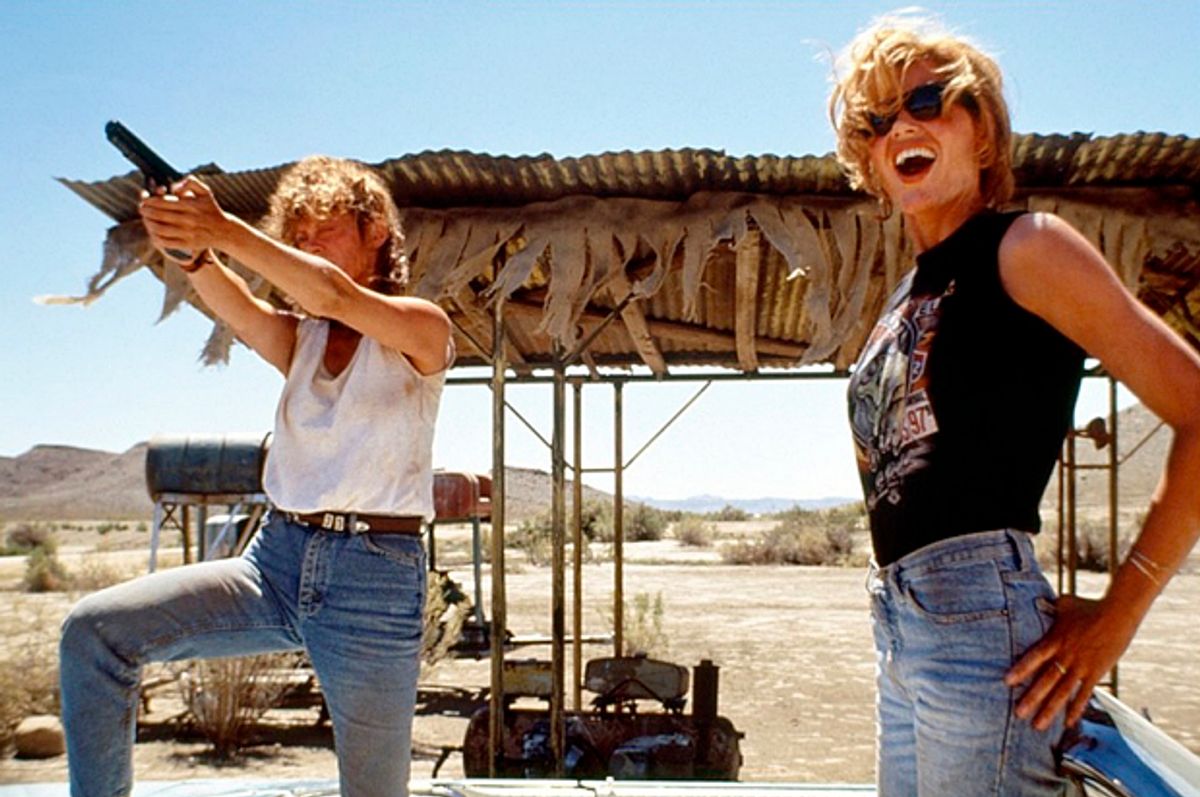 Susan Sarandon and Geena Davis in "Thelma and Louise" (MGM)
--

It's a sprawling road movie with a backdrop as big as the American West. It's a buddy movie, a crime story, an epic adventure and an American classic. Oh, and by the way, it's a feminist masterpiece. And as "Thelma & Louise" hits age 25, it's more urgent, more honest and more necessary than ever.

I remember watching director Ridley Scott's action drama as a young adult, when I was not too long out of film school and working in the New York office of a studio. The movie had been making waves for months before it was even released, with early buzz that described it in polarizing terms. I can still recall gasping at its sudden violence and jolting humor — and also at the shirtless midsection of then unknown Brad Pitt. I remember being so stunned by the title characters' defiant last drive that I couldn't even speak afterward. And mostly I remember walking out of that theater on West 8th Street feeling so full of hope that such a monumental work could be made about the lives of women.

Earlier this week, the film returned to theaters for a limited anniversary run through Fathom Events. But while it's a movie that was made for the big screen, I urge anyone who has never seen it or just hasn't seen it lately to now stream it via Amazon or YouTube. There's still just nothing else like "Thelma & Louise" — and with each passing year, I suspect more and more there never will be.

Callie Khouri's first screenplay — for which she won an Oscar — takes the classic road-picture template and deftly switches it up for its female protagonists. Thelma (Geena Davis) is a sweetly long-suffering housewife stuck in a dead-end marriage to her neglectful, philandering high school sweetheart, Darryl (Christopher McDonald). At the start of the film, she takes off for a rare weekend away with her friend Louise (Susan Sarandon), a pragmatic, world-weary diner waitress. But on their first evening out, they stop for a few drinks and attract the attention of an eager patron named Harlan. Out of her depth, Thelma drinks too much, and Harlan, recognizing opportunity, guides her out to the parking lot. In rapid succession he hits her, begins to rape her — and is stopped short by Louise, holding a gun to his head.

When Harlan tries to explain away the situation by calling it "fun," Louise furiously tells him, "Sounds like you got a real fucked-up idea of fun. … When a woman's crying like that, she isn't having any fun." He replies by taunting her. And then she kills him, setting in motion an escalating chain of events that transforms the women fundamentally and that famously and divisively ends in their choosing to keep going on their journey — straight off the rim of the Grand Canyon.

It is an astonishing, sexy, funny, harrowing piece of work. Though upon its release, the film seemed like a harbinger of things to come, it's almost impossible to imagine "Thelma & Louise" being made today. Furthermore, if this film or something like it were made today, it might well be even more controversial than it was in 1991. After all this is a summer in which the idea of women busting ghosts — let alone recreationally blowing up trucks — has been the subject of endlessly abusive, idiotic vitriol. A movie about two women who kill, rob, have enjoyable sex and demand a sexist trucker apologize for being rude? A movie in which the men are the desperate partners on the other end of the phone? My God — the takes, they would be so hot.

"It's so depressing how relevant it is," said New York Post film critic Sara Stewart. "If it came out today it would be as divisive —  if not more. Back then we were still in an era when original moviemaking was more of a thing. I feel now it'd be solely focused on the polarization."

Added Stewart, "Our culture is so suffused with misogyny in ways that have become subtler since it was released. We've come to view things like rape accusations as, 'Well, there are two sides to every story.' There are moments in this movie that speak to what women who've been sexually assaulted still face, and I don't think that a lot of people have really considered that."

Writer and film critic Kristen Lopez concurred. "It plays on a lot of things," she said. "There's that conversation they have where they discuss how they're not the perfect victims. Have we come far from that, or have we regressed?"

But the movie's also so much more than that. "It's this portrait of the Southwest very few movies evoke," Stewart said. "It's a beautiful, huge, epic road movie by Ridley Scott. It's a cinematic experience."

Yet the film was not an easy sell. While the film was still being shopped around, one prospective producer dismissed the heroines as "basically detestable and unsympathetic, [they] will never get the audience's support." Later writing in the Daily News, critic Richard Johnson said the film "justifies armed robbery [and] manslaughter as exercises in consciousness raising." That shocking, sequel-proof ending, meanwhile, is still debated, even though screenwriter Callie Khouri described it this way: "To me, they got away."

Khouri loosely drew on her own experiences to create the story, including her background as a waitress, her friendship with singer Pam Tillis and a mugging that made her realize later, "If I'd had a gun, I'd have killed them." In a 2013 interview, she recalled that while tinkering with an idea for a sitcom, "I got this idea: 'Two women go on a crime spree.' As soon as I had the idea I felt this strange sense of euphoria. The more I thought about it, the more excited I became. I mean, what would make two seemingly normal women go on a crime spree? Why would they do that? Why would I go on a crime spree?"

Added Khouri: "The idea that people can speak to you in such a way that if you had a gun you would kill them is something I think women experience every day. What also appealed to me was the idea that there is a side of you that you really don’t know exists. And you don’t know what the trigger for it is. You think you’re a normal person and you have a normal life, but things can happen and you don’t really know what’s inside of you. That kind of tenuous relationship we have with our normal life was really intriguing to me. How one little thing can happen and your whole world falls completely apart."

In a role that could have been entirely thankless stock comic relief, actor Christopher McDonald instead infuses the hapless, cuckolded Darryl with exactly the right measure of sorry bluster and inadequacy. When late in the film, Thelma comes to the realization, "I don't know, you know? Something's, like, crossed over in me and I can't go back, I mean I just couldn't live," the viewer understands exactly what she can't go back to. Yet incredibly, Davis and McDonald share only one early scene together. (Their natural rapport was no doubt aided by the fact they'd previously been engaged.)

Recently speaking to Salon, McDonald recalled his "career-changer" role, saying, "My job was basically to move the plot — to be the guy she didn't want to come home to." But, he added, "I wanted to show that there was love there." Even now he appreciates having been in a film in which, for a change, men are the secondary characters. "I'm the 'shit-heel husband,'" he said, "And Michael Madsen [as Louise's musician boyfriend] is the guy who can't commit, and Brad Pitt is this wonderful sexy beast who steals from them — and it's very interesting."

Added McDonald: "Callie Khouri wrote such a beautiful script. It stands alone. The transformation of these women is what sticks with me. I think the stars aligned. The true joy of it is that people are still talking about it 25 years later."

Maybe part of the reason "Thelma & Louise" has never been duplicated is because it truly is, as McDonald rightly called it, a "lightning in a bottle" phenomenon, one of those rare films in which everything simply comes together. Yet today, off screen, women still know that if they're assaulted after they've merely danced with a man, it's their behavior that will be questioned, their reputations that will be on the line. On screen, women still too often face an explosive backlash when they're more than secondary characters. That's why you should watch this classic movie tonight and see how compelling a story about women can be. That's why we need not just another "Thelma & Louise," but the next "Thelma & Louise" — and the next and the next after that.

"When I saw it for the first time, I was 18," critic Sara Stewart said. "I thought, 'I can't wait for more movies like this!' And I'm still waiting."