After the flood, Louisiana families seek a return to normalcy

As the school year begins amid recovery efforts, a flooded daycare center rushes to reopen 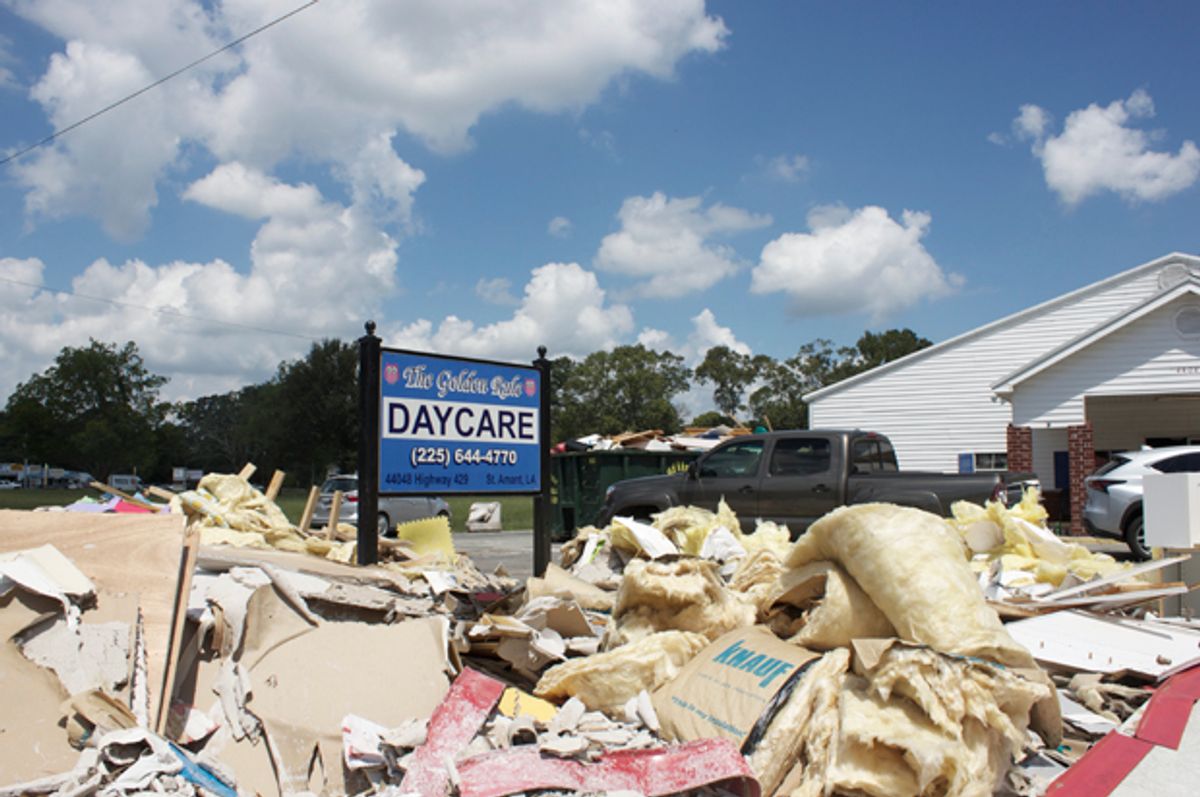 Yellow insulation and white corkboard cabinets are piled up 4 feet high in front of the Golden Rule Daycare in St. Amant, Louisiana. Next to the Dumpster are stacks of small plastic chairs and rows of cribs. Denise and Timmy Fontenot, two of the owners, sit on the bench outside. They have worked almost nonstop over the last week to empty the 10,000-square-foot building of ruined cribs and cabinets, teaching materials and toys. This is their third industrial-sized Dumpster.

The Fontenots live nearby and were spared from the water but their business partners, René and Randy Denham, who live a city block away from the day-care center, had 6 inches.

On Sunday, Aug. 14, the Denhams evacuated to the day-care facility to ride out the flood.

“At noon, Randy called me and said, ‘Look, the water is coming up high at the [day-care center]," Denise said. "We are going to take what we can to save it.’”

Denise and Timmy went at 4 p.m. to begin the process with the Denhams: Gathering up the computer and personnel documents, putting items higher on kitchen counters and in baby beds. Then they left for supper. When Denise and Timmy came back at 6:45 p.m., the water had risen to the steps. When Denise saw that, she broke down.

“We knew right then that what we did was probably not going to be enough,” she said.

Golden Rule cares for 140 children from Ascension and surrounding parishes; it has 28 employees, 12 of them working full-time. Of the full-time staff, 10 had flooding in their homes. The day-care center had opened its doors 16 years ago from the day of the flood: Aug. 14, 2000.

Inside the long building is a narrow hallway dividing the classrooms. All the Sheetrock has been torn out 4 feet up, exposing the wooden studs. Insulation pokes out in places and residual dirt from the flood covers the floors. In one of the infant rooms, painted lime green with purple squares along the ceiling, is a painting of Humpty Dumpty. In another room, the border is made of kids’ handprints in yellow and red.

On the floor, stencils bear the name of each child, showing the kids where they stand for activities or snack time. When parent BJ Bertucci saw his 2-year-old daughter’s name on the floor, the ladybug stencil covered in mud, he said, “I’m gonna get her back on her spot.” He was one of the four to 10 parents and grandparents who have come daily to help gut the day-care center. Others have brought food, drinks, containers and cleaning supplies to support those who are working.

“Yesterday morning, before eight o’clock, I had at least eight parents calling to see, saying, ‘How y’all doing? When are y’all opening up?’” Denise said. “And we have ones calling from other centers that are flooded and aren’t going to reopen, wanting to know where they can put their children.”

The owners had to discuss when they would be able to get back into the building last Friday, five days after the flooding began. The big question: Open up or shut down? They decided to reopen but are giving everyone an estimate of Dec. 14, almost four months away.

When Denise thinks of the parents and kids affected, her eyes fill with tears. “That’s when it hits you. This part is easy,” she said, pointing to the full Dumpster.  “We have great parents. We love them. We want them all to come back. That’s a big worry if we’re down too long, I know they’re going to have to go other places but hopefully they’re temporary and they can come back,” she said.

Now that the place is gutted, work will begin on remediating the mold. The insurance adjuster will arrive this week and the contractor estimates that the timeline for putting in insulation and Sheetrock and then painting will be four to five weeks. In the meantime, the owners will order tables, chairs and beds so they'll be available when it's time to move in. Their full-time employees have been temporarily laid off so they can have access to unemployment benefits. Part-time employees will try to supplement their funds with babysitting.

“Monday starts school,” Timmy said. “And just about everybody who has been off work is going back so we need schools, childcare centers, babysitters. Everything is gonna have to be back to normal, even though your house and home, everything is affected.”

Donaldsonville students started on Aug. 24 and the rest of Ascension Parish will begin on Monday, Aug. 29. Denise and Timmy’s daughter works at G.W Carver Primary where she teaches second grade; her school will receive kindergarteners through second graders from St. Amant Primary.

The Fontenots think their insurance will cover their losses, but it might not provide for all they have established over 16 years. The walls will be one color instead of covered in murals. They’ll take care of necessities for now. “The other stuff we may have lost, we’ll do what we did when we first opened up,” Denise said. “We garage saled for toys and books.”

Denise’s iPhone dings and she looks down at her new text messages. One of her employees was scheduled for a stent removal today. Denise and Timmy rescued another employee who is battling cancer after she had to leave her neighborhood by boat. She and her family stayed at their home — along with nine other friends and family members including the Fontenots’ new grandchild — for four days. “While we were at our home or doing this [work cleaning and gutting the day-care center], we had to stop and take her to treatments. You can’t miss those,” Denise said. “She missed two in the first two days, but we’ve made them up already.”

A public health inspector came by to talk to the Fontenots, to let them know the procedure for contacting authorities when they are ready to start up again.

Denise understands that in addition to the physical damage, a sense of normalcy has been disrupted for the kids who come to the center and their parents. The Fontenots estimate that 40 percent of parents  — many of them with multiple kids at the center — were impacted. Denise wants to reach out to one of the parents who is a school counselor about coming in to talk to the kids. She said, “Some of the parents that brought food had their children with them and the kids looked at the [Dumpster] and said, ‘That’s my mat,’ ‘That’s my blanket, ‘That’s my toy.’ They were sad, you know?”

In Denham Springs, the water came up so quickly in JQ Dick’s house that the water pressure wouldn’t allow him to open the door. And in order to get them to safety, he had to pass his children — his almost-8-year-old son and his 2-year-old daughter — to neighbors out of one of the front windows.

Dick said his fiancé was very worried about the kids. “The 2-year-old doesn’t understand, but my son knows what’s going on, he sees me coming in after working, he knows I’ve been at the house tearing down everything,” Dick said, “He’s handling it really well. I remember pulling him aside, telling him: ‘What you just went through is not a normal everyday thing. You really handled yourself like a big kid.’”

During the flood, while wading in and out of his neighborhood to help neighbors, Dick was able to recover his son’s two giant stuffed animals from the house. “Those two stuffed animals are my son's best friends,” Dick said. “I had told him ‘I’ll do whatever I can to get your friends out of this wreck.”

Nearly two weeks after the storm, Dick’s fiancé was in Baton Rouge — where they are staying with family members — trying to find new schools and day-care placements for his kids. Williamson Eye Center, where he works as a technician, is trying to locate housing for members of his family in Baton Rouge while they rebuild.

The only day Dick took off from clearing out and gutting his home, which filled with 8 feet of water, was to celebrate his son’s eighth birthday at a trampoline park — something that didn’t exactly help him recover from the strenuous work, he joked. Before his birthday, his son told him: “I didn’t have much I wanted for my birthday before, but now I have a lot of things to ask for.”

And he said, “We don’t want the kids to come out here and actually see the house like this, to see any of their stuff in piles, because everything was a complete loss as it is.” Added Dick: “We’re trying to keep them away and as distracted as possible.”

Children are resilient but it can be challenging for them to make sense of such a crisis.  Lou Irwin, a clinical social worker, has worked with the New Orleans Children’s Bureau on resources for children recovering from trauma, including those affected by Hurricane Katrina in New Orleans.

Irwin explained that for many people, the immediate fight, flight and freeze response can abate in a relatively short period of time. He said, “Trauma is not just the event but the response. How long it goes on without interruption makes a difference. If you can interrupt, if you can get people to safety, if they have options, if there are resources, if they have a supportive community, if they have access to spirituality, that can help reduce a PTSD diagnosis.”

The model used that can be used with children is to build on naturally occurring resiliency, restorative storytelling and reconnecting with their community. In one session, children draw the hardest moment of their trauma and clinicians bear witness to this verbally. Irwin said, “They highlight: ‘Where is their bravery, courage, hope?’ ‘What helped them survive?’ Healing comes from seeing their own agency and autonomy that helped them do good things.”

Watson resident Colton Estave has been helping his friend JQ Dick gut his home. While his 5-year-old son was not affected by flooding, he has seen the impact on his friends and community. “You just try to keep them occupied and get them involved in helping,” Estave said. “My son is really into that. Kids love to be helpers. There are ways to make them feel like they are contributing something and helping.”

Lisa M. O'Neill is a writer based in Tucson, Arizona whose work explores pop culture, politics, gender, class, race, and mass incarceration. You can find her at lisamoneill.com or at @thislisaoneill on Twitter