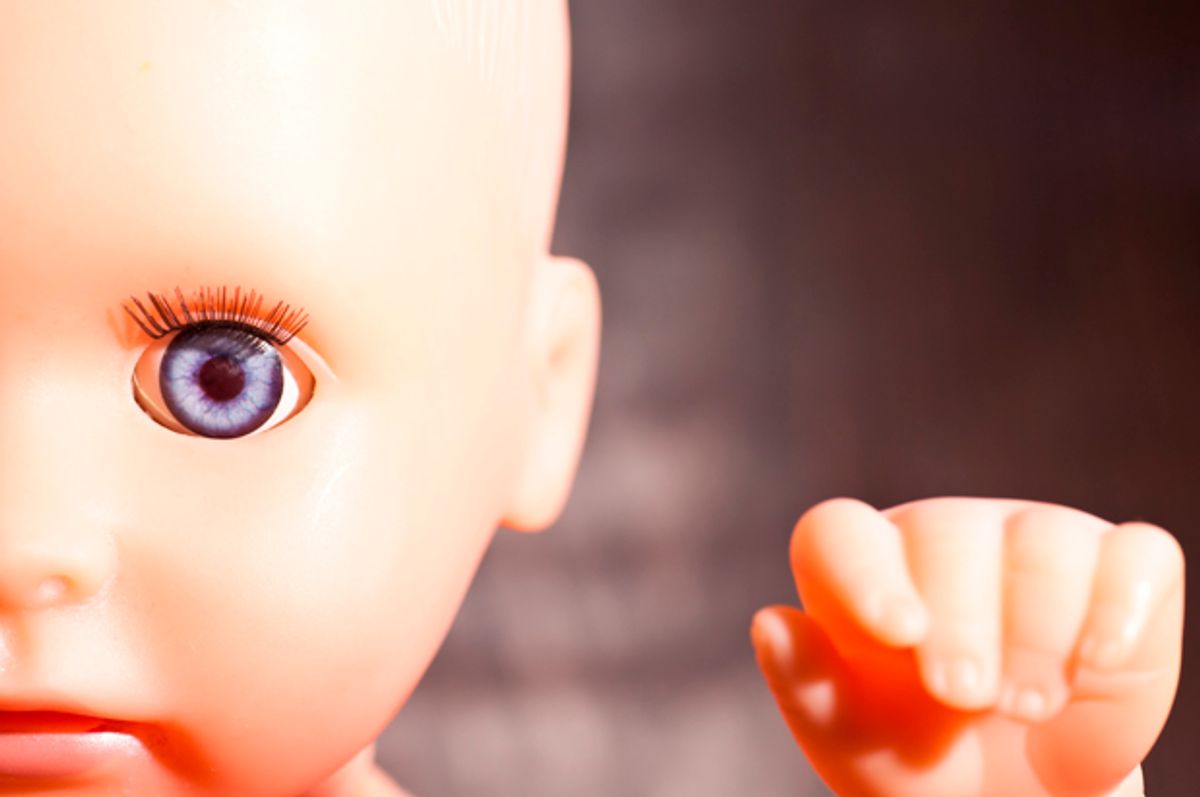 From this week's department of No Kidding, Everybody, a new Australian study published Thursday found giving teenage girls dolls to deter them from getting pregnant doesn't work. In fact, girls from schools that use "baby simulator" programs are actually 36 percent more likely to become pregnant by the time they're 20 than those in schools that don't. Apparently, dolls are not birth control. Huh.

The study's results, published in The Lancet, involved 2,800 girls at 57 western Australian schools from the ages 13 to 15, following them until they turned 20. The RealCare baby dolls are supposed to be a boot camp — the dolls cry, fuss and require feeding and diaper changing. They're part of an educational curriculum designed to show girls "the physical, emotional, social, and financial consequences of becoming pregnant and dealing with parenthood." The Reality Works company that produces them promises that its product "provides unforgettable lessons" for use in teen pregnancy prevention, as well as child care. They're also not cheap, costing around 1,200 Australian dollars each.

In a statement this week to ABC News, the company argued that the study "was not a representation of our curriculum and simulator learning modality but the researchers 'adaptation' and is consequently not reflective of our product nor its efficacy." Reality Works says the study tracked girls who'd put in "a mere 2.5 hours" of hands-on time. ABC also notes that the simulators are used in 89 countries, including the U.S.

Of course, small scale studies are imperfect vessels. But if, as the study's lead author Sally Brinkman says, one result of these experiments is that "A lot of the teenagers become attached to their fake babies," one can understand how that might not be the intended result. The findings also cite other studies that suggest that "few girls believed caring for their own infant would be the same as caring for a simulated infant." Is this like how video games don't actually prepare one for driving? Likewise, is it any shock that here in the U.S., the states with abstinence-only sex education have the highest teen pregnancy rates? Things that tend not to be effective: initiatives that try to dissuade teens from having sex or flat out pretend that they don't.

So, what does help? Surprisingly, two years ago, the National Bureau of Economic Research found a correlation between areas of high viewership of MTV's "16 and Pregnant" and declining adolescent birth rates. Researchers concluded that the show likely "had an influence on teens' thinking regarding birth control and abortion." So maybe actual human experience trumps playing with dolls.

But you know what really seems to do the job in preventing pregnancy? Birth control. Last year, the Colorado Department of Public Health and Environment released its findings that after offering free, long-term birth control options across the state, the teen birthrate dipped by 40 percent, and the abortion rate dropped by 42 percent over a four year period. And the biggest changes were in the poorest communities.

As Peggy Orenstein masterfully explained in her book "Girls & Sex," the climate around sex education for females is centered on telling them what not to do: Don't be a victim. Don't get pregnant. Don't. As she told Salon earlier this year, "And then we tell them to go into their sexual encounters with a sense of equality. How is that supposed to happen?" When education gets real about female sexuality, including healthy relationships and birth control, girls have better odds of controlling their own reproductive futures. No, a doll won't directly lead to unplanned pregnancy, but unrealistic initiatives won't curtail it either. And in an editorial accompanying the Lancet study, Dr Julie Quinlivan of the University of Notre Dame put it simply when she said, "We cannot afford the quick fix, especially when it doesn't work."