Barack and Michelle's first date: "He thought she could teach him a thing or two"

Salon talks to Parker Sawyers, who portrays the president as a young man in the new film "Southside With You" 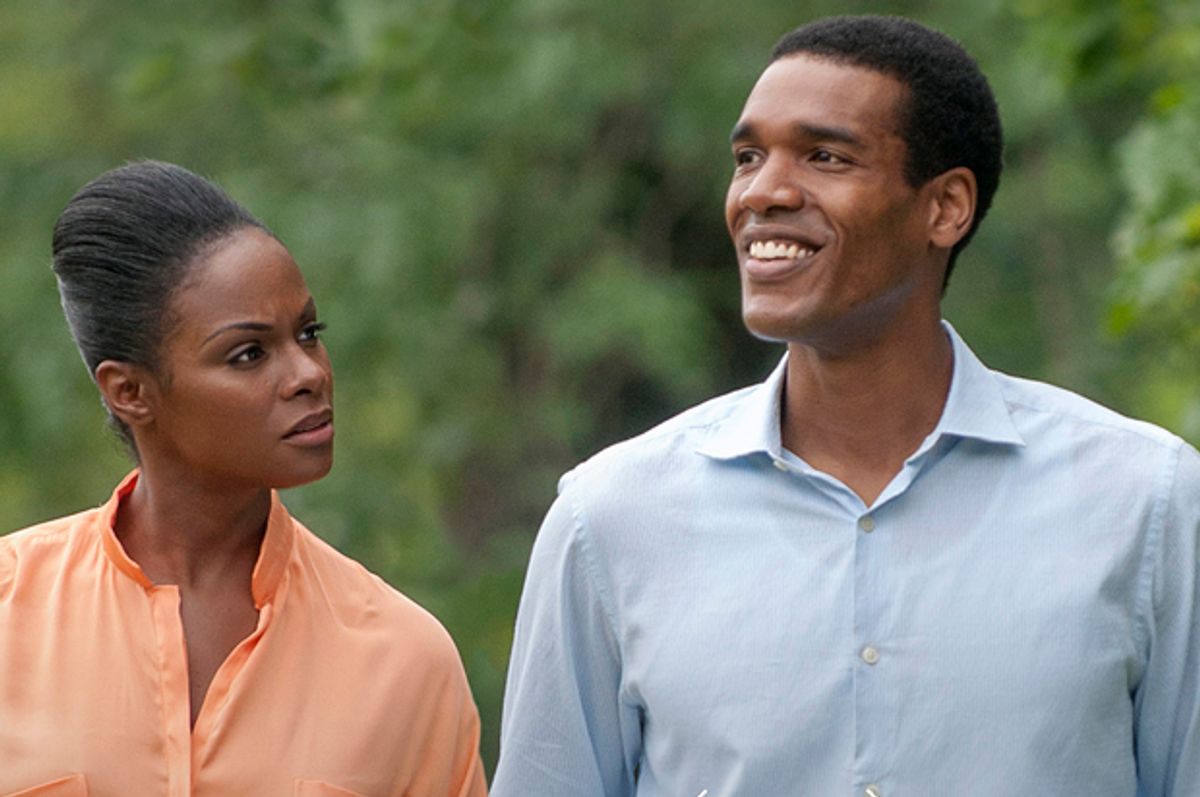 Tika Sumpter and Parker Sawyers in "Southside with You" (Miramax)
--

Parker Sawyers gets a breakout role as a young Barack Obama in the lovely, appealing romance “Southside with You.” The film chronicles the first date between Obama and Michelle Robinson (a wonderful Tika Sumpter). The film is set on a day in 1989 when Barack invites her to a meeting. He picks her up early, hoping to get to know Michelle that day, taking her to an art gallery, buying her a sandwich for lunch in a park and eventually catching a screening of Spike Lee’s “Do the Right Thing.”

“Southside with You” gives Sawyers a plum role as the future president, which includes scenes of Obama orating in a church, moments of tenderness between the lovers, as well as a few frank discussions of race and class.

The actor radiates an easygoing charm and flashes a dazzling smile. Salon spoke with Sawyers about playing the president, a favorite first date of his own and racial and social politics.

What was the best (or worst) first date you ever had?

Best date. . . . Let’s see. I suppose [with] my wife. Do I have to say that? We went for dinner, dancing and then we talked and made out on the hood on her car outside my buddy’s apartment until 6 in the morning. The worst one, hmm. . . . I think I accidentally got drunk. I had as many as I could handle but I hadn’t eaten. I didn’t say anything offensive. I wasn’t rude. But I was dumb.

Did you feel pressure playing not just a real person but Barack Obama?

It was all right, actually. I suppose if I was the actual president that would be way harder. I was happy to be the lead in a film, have a job and be on location. There were so many words and emotions to figure out. I got to the work and just had to do it.

How did you prepare to play the president’s younger self? What research did or could you do on the character?

I read “Dreams from My Father” and “The Audacity of Hope.” I watched videos of him when he was younger. I worked on the voice and had a strong impersonation already in my back pocket. I removed some layers from that, so it wasn’t a direct impersonation.

What do you think was the essence of Barack’s personality and motivation during this date?

The motivation was he was really enamored and smitten with this woman. I wanted to play him as someone who knows himself well. He was confident and intelligent. He thought he could learn something from her. He thought she could teach him a thing or two. That was why he was interested in her. He was playful but wasn’t playing games with her.

How did you work on your chemistry with your co-star, Tika?

We had it from the get-go. Maybe that’s why I was cast? It just worked. We rehearsed via Skype when I was in London [before shooting]. When I flew into Chicago we rehearsed for four days but we rehearsed mostly as individuals, so we were getting to know each other when we were together. I didn’t know her reactions [to what I'm saying] so I could smile back or look away as the scene unfolded.

There’s a lovely scene at the art gallery where the characters talk about cultural touchstones — “Good Times” for example, and basketball. What can you say about the cultural images and stereotypes that Barack had versus the ones you grew up with?

They were very aware of who they were in 1989, but they also understood that there is always progress that needs to be made. They would usher in a new wave of progress. I’m a black man in 2016, and I am glad to be a part of that.

What do you think about the film’s discussions of race and class?

It is an ongoing narrative in America. It’s part of our thread of the past and hopefully it unravels in the future and is no longer a thread. It’s an unfortunate circumstance, but it is the truth right now.

They bettered themselves and their community and, in a wider sense, America.

Parker, what did you think about the speech Barack gives about “letting go of judgment?”

One of the things I realized that was similar between me and President Obama in the film was that I’m about letting go of judgment, especially when it’s kids who are 25 holding grudges against their parents. I became a father at 26, and I still mess up some things. That’s how life is. It’s hard for me to judge my parents strictly or to hold onto a grudge because people are people and they make mistakes — as long as it’s not “I’m going to hurt you.” We all mess up. I don’t know anyone who is perfect. We’re all flawed and fractured.