Donald Trump has no love for black people: His "outreach" and "pivot" are really aimed at winning over nervous white voters 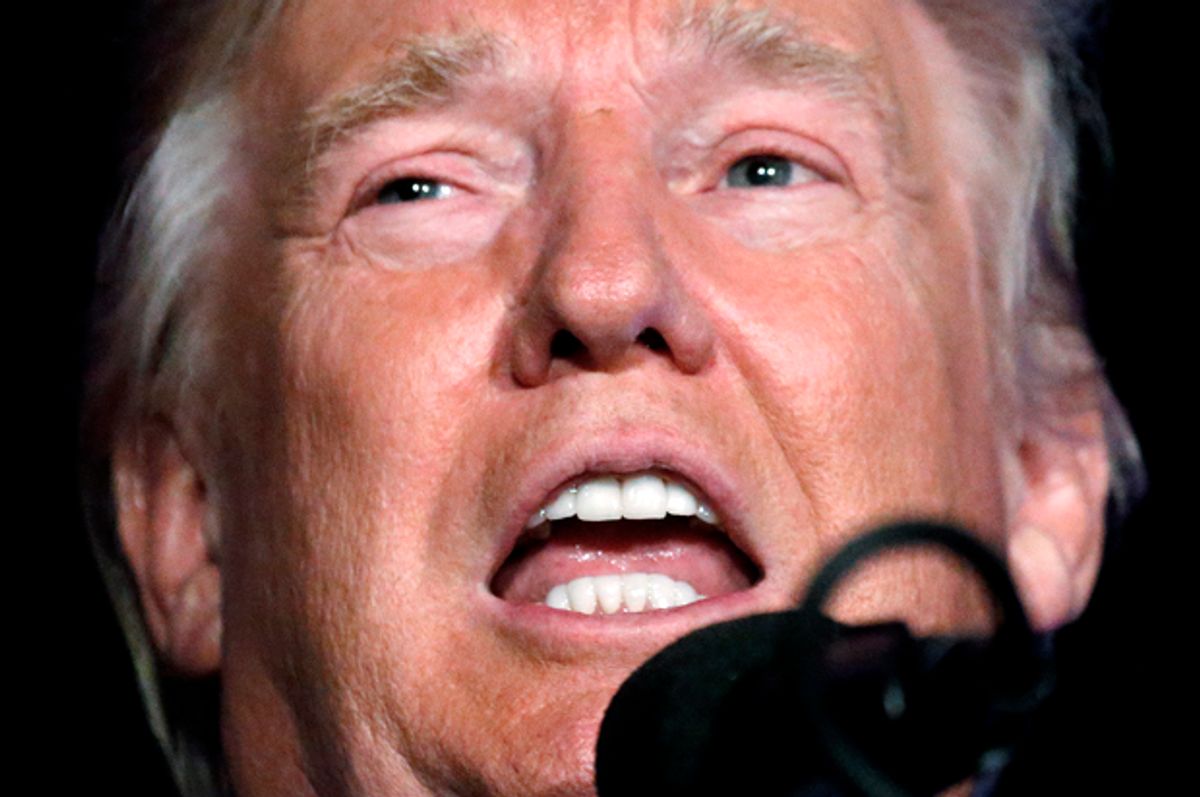 Republican presidential candidate Donald Trump is earnestly continuing his flagellation of black America as part of a political outreach campaign. At a Monday political rally in Akron, Ohio, he told an almost entirely white audience how day-to-day life for black Americans is a dystopic, Hobbesian, hellish, Mad Max-like state of existence:

"Poverty. Rejection. Horrible education. No housing. No homes. No ownership. Crime at levels nobody has seen,” Trump said, painting a dystopian picture of black life for rally attendees. “You can go to war zones in countries that we’re fighting and it’s safer than living in some of our inner cities. They’re run by the Democrats, " Trump continued.

“Look, it is a disaster the way African-Americans are living,” he said, erroneously suggesting that most black Americans live in inner cities. “We’ll get rid of the crime. You’ll be able to walk down the street without getting shot.”

These comments are deeply problematic. Donald Trump is once again grossly distorting the facts to advance his self-interested political goals. Trump is talking about black Americans to a white audience in fantastical terms that satisfy the most stereotypical and racist presumptions of the white gaze. And he is most certainly is no expert on African-American history or its living present.

Trump’s comments cannot be salvaged. His recent speech, however, has provided an opportunity to clarify some common misconceptions about African-American politics.

African-Americans possess agency and free will and over the years have made a choice to give their overwhelming support to the Democratic Party. Identification with a particular party is influenced by socialization at home and the broader community, as well as reinforced by cues from trusted elites and media sources. It can be influenced by specific political issues or generation-defining events and usually remains stable throughout a person’s lifetime.

African-American support for the Democratic Party can be traced back to the launch of President Franklin D. Roosevelt’s New Deal program. Black support of Democrats continued to grow and solidify in response to Presidents John F. Kennedy and Lyndon Johnson’s efforts to pass civil rights legislation and concede to some of the demands of the black freedom struggle. African-American support for Democrats culminated — and will likely be cemented for several generations in the future — by the election (twice) of President Barack Obama, the United States’ first black president.

In contrast, the Republican Party is the United States’ largest white identity organization. From the election of President Richard Nixon to the present, the Republican Party has relied on the white supremacist “Southern strategy” of overt and covert racial appeals to win over white voters. Its current presidential nominee was the primary agitator behind the white supremacist “birther” conspiracy theories about Obama, challenging his U.S. birth. Plus through gerrymandering and voter suppression, the Republican Party has worked diligently to undermine and repeal the won-in-blood gains of the civil rights movement.

African-American support for the Democratic Party is not a perfect arrangement. It reflects the structural limitations of the United States' two-party political system. Likewise, the racism and hostility from the Republican Party toward African-Americans and other people of color makes their voting for its candidates an untenable and almost unthinkable proposition.

Michael Dawson, director of the University of Chicago’s Center for the Study of Race, Politics, and Culture, explained to Salon via email that while his research has shown that in the past "blacks did somewhat better economically under Democratic administrations for a variety of reason (mostly doing with racial difference in unemployment rates during Democratic and Republican administrations); it is also true that neither party has done well by blacks."

Indeed, Dawson added, "Public opinion data shows that blacks were relatively unhappy with both parties from the early 1990s through 2005. Support for Democrats was to a significant degree based on 'choosing the lesser evil' and not being bamboozled."

Until "the sustained reemergence of various radical and progressive forces including within black and brown communities, Dawson predicted the arrival of "this predicament every four years.”

Political scientist Lester Spence, author of “Knocking the Hustle: Against the Neoliberal Turn in Black Politics,” told Salon via email that only one of the two major parties ever legitimately though weakly competes for the black vote. "Black voters are in effect caught between a rock and a hard place, and as a result tend to make the best of a constrained set of choices."

In an election where black voters are "facing an explicitly racist major party candidate their choice is pretty simple and straightforward," Spence said their choice is to either vote for, as Adolph Reed put it, "the lying neoliberal warmonger,"  support a third-party candidate who won't likely win,  or stay home.

Black conservatives are unlikely to potentially win over support for the Republican Party and Donald Trump. Leah Wright Rigueur, a Harvard University political scientist and author of “The Loneliness of the Black Republican,” explained to Salon that black conservatives and Republicans are in "a curious predicament" when it comes to Donald Trump. As of this past spring, roughly two-thirds of black Republicans held unfavorable views of Trump, she said.

"Some have been quite outspoken about their dissatisfaction," Rigueur said. "But over the last several months, many appear to have accepted Trump, whether out of party loyalty, dislike of Hillary Clinton, or a sense that he's attempting to soften his image."

Yet, she said, that black conservatives and Republicans for Trump have a nearly impossible task, given that Trump's unfavorable ratings are hovering at 90 percent with black audiences. "An outreach effort that appears half-hazard and scattered contributes to the difficulty, as does the candidate['s] lack of engagement with black communities and lack of substantive policy solutions," Rigueur said.

"There's always going to be a small group of black voters who support the GOP candidate no matter what," Rigueur added. But most "black voters will not support a Republican candidate if they believe that candidate is racist, supports racism, or has no genuine interest in black people," she said, adding, "So when black Trump supporters suddenly try and pitch the nominee, their effort is largely looked upon with skepticism.”

African-American voters are neither unsophisticated nor stupid, Rigueur added. "They will not be persuaded by how the Republican Party consistently attempts to repackage and [misrepresent] its policies through black conservative mouthpieces. " Black voters and other people of color have made a decision about how right-wing policies will affect their communities — and found these policies "wholly lacking, deleterious, disingenuous, and in many instances, extremely dangerous."

Donald Trump’s outreach campaign to blacks and Latinos is simply the latest iteration in a long-standing, tedious, obvious, boilerplate Republican political ploy. As Princeton University political science professor Tali Mendelberg detailed in her book “The Race Card,” Trump's moves are a replay of the Southern strategy and how Republicans from Nixon to President Ronald Reagan (and now Trump) have used anti-black animus to win over the base of their party. During the general election, Republican candidates then try to soften their racist rhetoric to win over conservative and independent white voters who are more comfortable with “coded appeals” than with outright racist vitriol.

Trump is “using a familiar strategy developed by racial right-wing candidates over decades to create a mainstream impression," Mendelberg said. "It's not designed to appeal to African Americans. It's meant to appeal to white moderates. He's not inventing any of this. It's a part of the standard campaign playbook of racial conservative candidates. Roger Ailes, a veteran of the Willie Horton assault in 1988, is adept at it.”

Michael Dawson underscored this point when he told Salon, “Trump’s 'pivot' as we know from political science research is not aimed at convincing blacks or Latinos to vote for him, but to give him plausible cover so that he can reach out to conservative white voters who don’t want his and his compatriots racism continually put on public display.”

Cedric Johnson, professor of African-American studies and political science at the University of Illinois at Chicago, told Salon via email that Trump’s black outreach program is really not about drawing black voters. “There's no way in hell that Trump is going to move black voters to his program en masse, " certainly not in the next 70 days or so.

"His politics are too socially mean, his mass rallies are displays of some of the most reactionary, vile rhetoric we've witnessed in recent memory, and he doesn't have any real record that he can use to connect with most middle class and working class black voters," Johnson said,

Johnson pointed out that Trump fought a racial-bias case against his real estate company — at a moment when there was widespread national support for anti-discrimination policy. "If anything, the 1973 discrimination lawsuit against him is enough to sink any talk that he's really hoping to connect to black voters."

Said Johnson: "Even Nixon supported the civil rights regulatory regime in a manner that makes him look like a good liberal compared to the GOP" in the 1980s and 1990s.

Thus Donald Trump’s “pivot” to win over black and brown voters will fail for many reasons: His poll numbers for this group are at levels even below the abysmally low numbers of recent Republican presidential nominees. Trump’s political brand is one of toxic, angry and aggrieved whiteness, with bigotry and racism as core parts of his appeal — not secondary to it.

A Kluxer can take off his or her sheets after a cross burning but soot is usually left on his or her fingers and hands. Donald Trump has the same problem: The residue of bigotry and hatred are not easily washed off or removed. And that residue is certainly not cleaned off by a faux “outreach” campaign that's predicated on insulting black Americans in order to somehow magically win their votes in November.