The TV special on “Athletes, Responsibility, and Violence” missed opportunities to focus on systemic reform 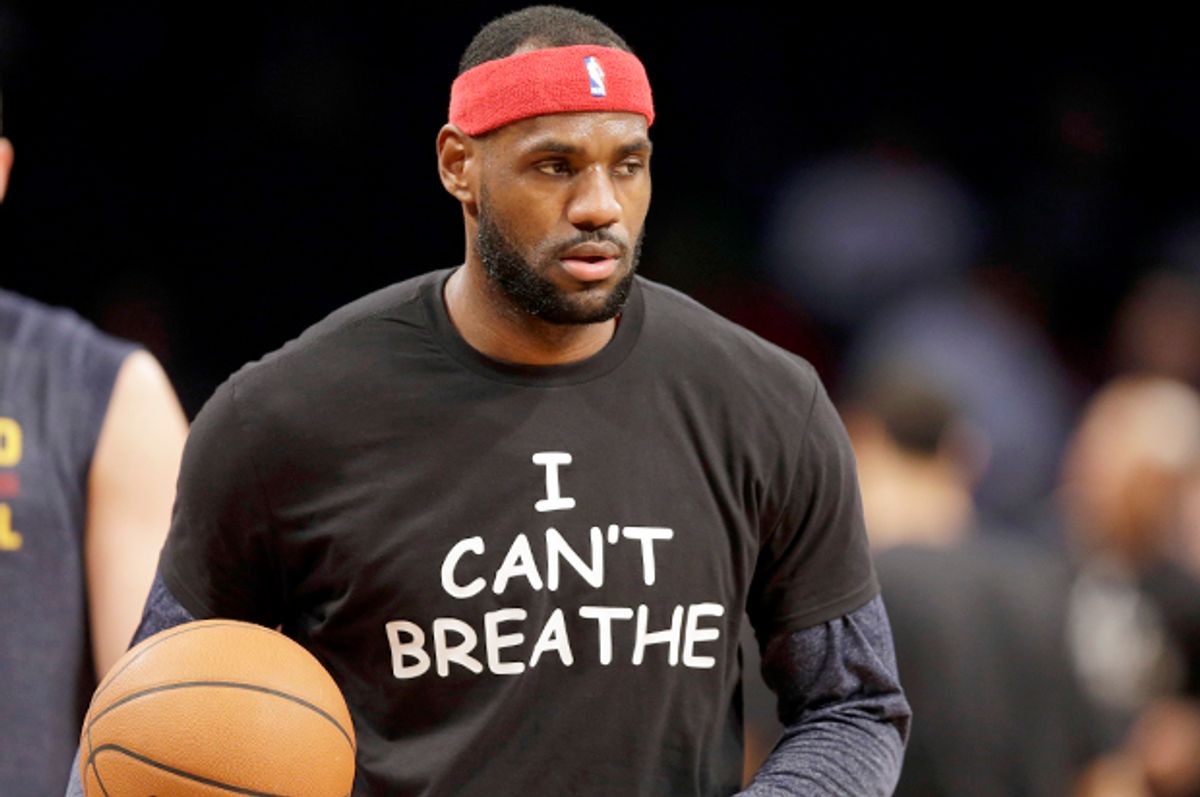 The promotional video for ESPN's “An Undefeated Conversation: Athletes, Responsibility, and Violence,” ended with a slew of young people ripping silver duct tape off their mouths. The message was clear: With the help of their corporate overlord, athletes would finally break their silence about violence wrought upon the black community. Each strip of tape had a name scrawled upon it, but unlike the diverse bunch of young people, the names all had something in common. “LeBron,” “Melo,” “Curry,” “Paul,” “Wade.” They are all black players.

The trouble, of course, is that these athletes have already spoken out about gun violence and police brutality. Thursday evening's televised special was inspired by Carmelo Anthony, Chris Paul, Dwyane Wade, and LeBron James's powerful statement at the ESPY awards. Steph Curry has spoken out about how gun violence that claims the lives of children affects him as a father, a clip that was played at one point during the evening. The silence of black athletes when it comes to race and violence has long been broken. But they could sure use some white company.

At one point in the evening, the special's host, Jemele Hill, did pay lip service to the notion that white athletes also have political obligations to the black community, but the special's treatment of the idea was entirely superficial, and undermined by its structure. (Beginning with its significantly delayed start because the network was unwilling to prioritize the serious conversation over a Little League game.)

The very combination of crimes committed by and against laypeople and police brutality in the same discussion belied a confusion about the origins of the latter; the fact that the evening focused overwhelmingly on the former felt like a capitulation to ugly, Giuliani-esque views. Setting aside the practical point that police brutality in a community is not correlated with its rates of violent crime, the distinction between so-called “black-on-black” crime and blue-on-black crime is philosophical as well.

Private citizens have little to no control over the behavior of other private citizens, violent and illegal or no. This is a feature, not a bug. Private citizens, in theory, have a great deal of control over the behavior of armed agents of the state via the elected officials who hire them, fire them, set the policies they operate by, and ensure those policies are enforced. Again, this is by design. Citizens ought to have this power over their government and are thus responsible to call out its prejudice and incompetence. Citizens ought not be able to dictate the actions of other citizens, regardless of whether they share the same skin tone, and thus bear incredibly limited responsibility for their actions. (This notion, by the way, that our governments work for us is a decidedly conservative ideal. That the right abandons it readily when discussing carnage wrought upon communities of color is grossly revealing.)

When the ESPN "Conversation" did, occasionally, touch upon the idea of systemic reform, rather than calling out black youth and parents for their respective misdeeds and inaction, it often did so in problematic ways. At one point, a retired police officer complained that the streets would be safer if more young people -- the small fraction of black youth he characterized as violent — spent a longer time in jail.

In contrast, the special's most powerful moments served as implicit rebuttals to these common conservative narratives. Successful black commentators, athletes and activists described their own brushes with violence, on the receiving and perpetrating ends, illustrations of the moral heroism required to overcome the psychological manifestation of a lifetime bearing the brunt of systemic brutality via violence, poverty and segregation.

We heard a story of a young man who, growing up in Compton, assumed that lethal violence was omnipresent, and got a gun before heading off to Buffalo. But he got rid of the gun when he realized it made him more inclined to escalate peaceful situations, and to perceive other black men as threats. Another panelist described his strategy while working security for a prominent black athlete, and his attempts to deescalate and diffuse situations through calm, reasoned dialogue rather than force. Sitting next to a cop who'd suggested longer sentences for seemingly irredeemable violent youth, this panelist elaborated on his own violent history, inspired by a dearth of successful black role models save the gangsters on his block. In doing so, he inadvertently highlighted the problem with ESPN's narrative.

The very title of the special and its decision to focus almost exclusively on the responsibility of black athletes to condemn and confront violence suggests that engaging in politics is, for them, a choice, a responsibility to shirk or to live up to. But to be a successful minority in America is an inescapably political act. If anything, athletes who are able to overcome substantial systemic disadvantages to achieve material comfort and cultural cachet are more entitled to an overly optimistic view of America, wherein personal agency can solve all ills, than their privileged white counterparts. It is a testament to their humility that they've chosen, instead, to be vocal participants in and advocates for black America. It's long past time for their white teammates to be the same.