Nerds of the world, unite: The villains have weaponized "canon" — and it's up to us to stop it

News flash: The backlash against casting Zendaya as Mary Jane Watson is not unrelated to the abuse of Leslie Jones 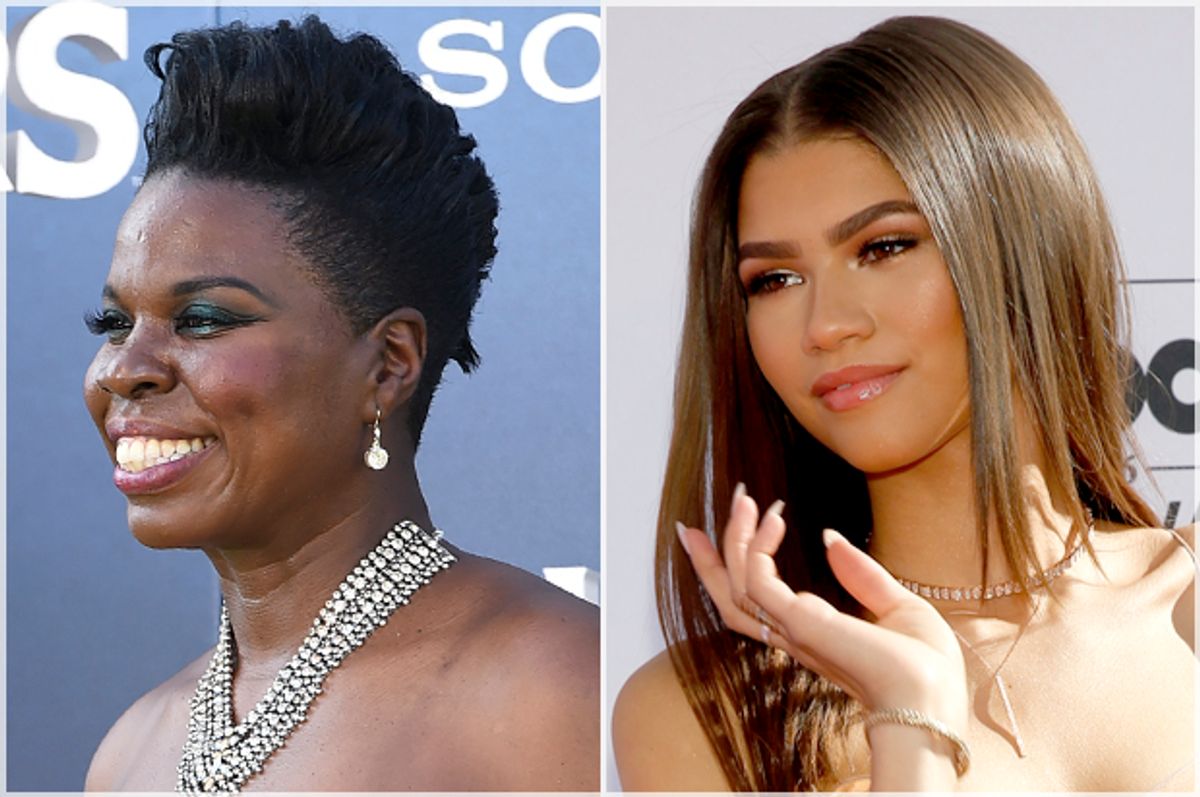 "If 101% of pop culture catered to white nerds instead of only 98.1% then the cyber attacks like the one on Leslie Jones wouldn't happen." – Patton Oswalt on Twitter

All in all, this has not been a banner couple of weeks in the world of nerd-dom.

Last Friday, reports began circulating that Zendaya Coleman is set to play Peter Parker/Spider-Man's great love Mary Jane Watson in Marvel's upcoming "Spider-Man: Homecoming." This is groundbreaking: the pop star will be the first woman of color to portray one of the most iconic women in comics, and will co-star in a film featuring the world's most profitable superhero.

Nerds of color were overjoyed. Pop culture lovers of all cultural backgrounds seemed to be elated, actually…except the usual suspects.

That would be the same crowd that spun into a tizzy when the first trailer for "Star Wars: The Force Awakens" was released, revealing that John Boyega, a black actor, was playing a storm trooper. Storm troopers can't be black, they said. The world disagreed, to the tune of $529 million worldwide on the film's opening weekend, setting the record for the biggest single weekend gross earning of any movie.

What's interesting this time around is that people who have a problem with Zendaya playing MJ casting aren't necessarily mentioning her heritage. They're complaining about her hair color.

MJ is witty, ambitious, supportive and smart, one of the most extensively developed non-"super" female characters in the Marvel universe. She's also been played by Kirsten Dunst,  a natural blonde who didn't face the pushback Zendaya's casting was met with on Twitter.

The most famous tweet may be from user Randall Scott: "I'm down with a black human torch. Down with a black storm trooper. Mary Jane Watson is a fucking redhead. The end."

Scott's tweet represents one of nerd-dom's biggest problems: A whole lot of people who, in their heart of hearts, don't consider themselves to be racist, are nevertheless playing into dangerous campaigns spearheaded by hardcore bigots. Only here, the weapon of choice is "canon."

In the same way that a lot of lovely, well-meaning folks say and tweet things that they don't realize may be offensive, my guess is that a number of nerds who disagree with Zendaya's casting were not at all "down with," if not outright horrified by, Leslie Jones's violating hack. But they are linked.

When Buzzfeed's Jarett Wieselman replied with a picture of Zendaya with red hair, asking, "so you're good then?" Scott replied, " 'red hair' is not 'a redhead.' "

Many, many replies to Scott from countless users followed; his Twitter handle seems to have disappeared. But Scott's reasoning is one to which nerds of all stripes really should pay attention.

By that I'm not referring to his "'red hair' is not 'a redhead'" argument. That's coded language used to get around saying outright that he doesn't want MJ to be black.

Instead, it's the idea that he's "down" with a black Johnny Storm and a black storm trooper.

Let's be brazenly honest. A lot of this dissent stems has to do with Marvel messing with their fantasies starring MJ as the girl next door. But it also speaks to the philosophy that only a specific type of fan gets to participate in the enjoyment of or influence the conversation about these characters and the properties to which they belong.

It's one thing to approve of Boyega in "Star Wars," or disapprove of an all-female remake of "Ghostbusters," a definitive movie for children the '80s. It's quite another to attempt to dehumanize a woman in front of the world simply for daring to be successful and African American.

Reasonable people, nerdish or otherwise, would agree that what happened to Jones is deplorable, and yet some of them still don't want MJ to be played by a black woman. But those nerds probably wouldn't appreciate bigoted cyberbullies appropriating their fandom, either.

Remember that #BoycottStarWarsVII hashtag? Evidence suggests that it was perpetuated by troll provocateurs at 4chan, with the intent of manufacturing an issue to bait the media. But more than a few nerds jumped in that fray, as well as white supremacists. Think the 4chan group or those organized racists cared at all about canon?

The same is true of Jones's incident. More so, I'd wager. If you were a geek who whined about how wrong it is for Hollywood to feature women busting ghosts…well, hate to break it to you, but that kind of makes you an accessory to this crime. A crime that had nothing to do with your beloved movie, and everything to do with the alt-right flexing its muscle.

This isn't to imply that nerd and geek culture doesn't have a legitimate problem with racism and sexism. It most certainly does, and has for years. In the same way, the comic book industry is still addressing decades-worth of whitewashing, clumsy attempts at diversity and the peddling of white savior tropes. (As additional proof that nerds and geeks are not a cultural monolith, not every black nerd is completely and utterly thrilled about Zendaya's casting, either.)

But comic book fans and sci-fi aficionados of all races share one thing in common, and that is that aspects of nerd life are cultivated within a bubble. Millions of people went to see the Avengers movies. On television, The CW has cultivated a healthy audience on the strength of its DC titles, including "Arrow," "The Flash" and starting this fall, "Supergirl."

Within the sizable audiences for those titles are hardcore geeks who read Green Arrow, The Flash and other DC and Marvel titles long before the films and TV series came into existence. These fans love to debate whether a plot point adheres to canon, and whether various twists make sense within those titles' intricately established universes. Chatting with them can be lively and invigorating; the best inspire exploration of other influential works.

This level of passion grows problematic, however, when one's dedication to story becomes calcified, exclusive and unwilling to evolve with the times.

One of the benefits of privilege is being able to cling to the concept of the origin story. But look at the genesis of modern comic books themselves. The Marvel and DC universes flowered within an American culture emboldened by our participation in World War II. In that era, we saw ourselves as champions of justice, in spite of continuing to sign off on legalized segregation and workplace sexism.

But our grandest ideals — courage, bravery, defending the underdog — manifested in form of heroes who started out white. Hence, barring alien intervention, transformation by Gamma ray or any number of extraordinary factors, that whiteness is immutable, the end. To those people, "canon" is a perfectly sculpted terrarium. There's no reason to mess with it. But this viewpoint doesn't take into account America's deep past or the open road that is its future — or, for that matter, that the very concept of canon is a moving target.

Thus in 2010, when a friendly online campaign urged Marvel cast another "Spider-Man: Homecoming" star, Donald Glover, in the role of Spidey, it soon transformed into a battleground. Peter Parker cannot possibly be black. (Sadly, a leaked legal licensing agreement between Sony Pictures Entertainment and Marvel Entertainment codified this idea.)

Any changes in that terrarium, such as an increase in a character's melanin, somehow throws off the balance. It is the end of all things!...Until the next movie grosses millions.

Arguments that positive representations of women and minorities in comics benefit everyone are meaningless to those people, even as the cry of "canon" is increasingly being exploited to terrorize and exclude. This manifests in small ways, as in the well-worn "real fans versus fake fans" argument ("All the black non-comic now comic book fans trying to butt into a convo that ain't theirs. Mary Jane is white. No need to change it," posits one Twitter user) as well as huge horrors, like what happened to Jones.

The key is for nerds of color and their allies to engage with people whose viewpoints can be changed, and to recognize those who are clearly in the fight for the wrong reasons. For example, there may be hope for this guy, who tweeted, "What's with the hollywood [sic] thing where they replace redheaded comic book characters with random dark haired mixed race actors? I don't get it." Not so much for this one: "Since Mary Jane is being played by a Black woman, can MLK be played by a White man in a next movie about him?"

Based on what one can surmise from their feeds, the former is a legitimate nerd who may actually be willing to hear another point of view, whereas the latter is not concerned one whit about maintaining the integrity of the Spider-Man universe. Move along.

Disagree with Scott's opinion about MJ's, ahem, hair color; it's your right to do so. Perhaps this experience shifted his viewpoint toward something more open and positive. A geek can dream.

In any case, the success of "Spider-Man: Homecoming" will have nothing to do with ginger hair, or the race of any actress, any more than it turns on the casting of a British actor, Tom Holland, as a character born and raised in Queens, NY. No, it will be dependent upon the film's entire execution — its writing, directing, special effects and the quality of its performances. Whether millions of people show up to movie theaters to see it will be a larger determinant of its success. History and the online buzz surrounding the project tell us they will.

History also hints that this won't be the last of these arguments over the "race bending" of comic book characters or, sadly, the last time a person of color is brutishly targeted online. But let's hope the genuine nerds of the world quibbling over race and hair color learn something from this round and choose to argue for inclusion and evolution next time.

Don't let the villains be victorious in this uncivil war.