The big risk to the economy that no one's talking about: Spiraling corporate debt

Outside the wealthiest 1 % of companies, U.S. corporations are taking on more debt, raising concerns of a bubble. 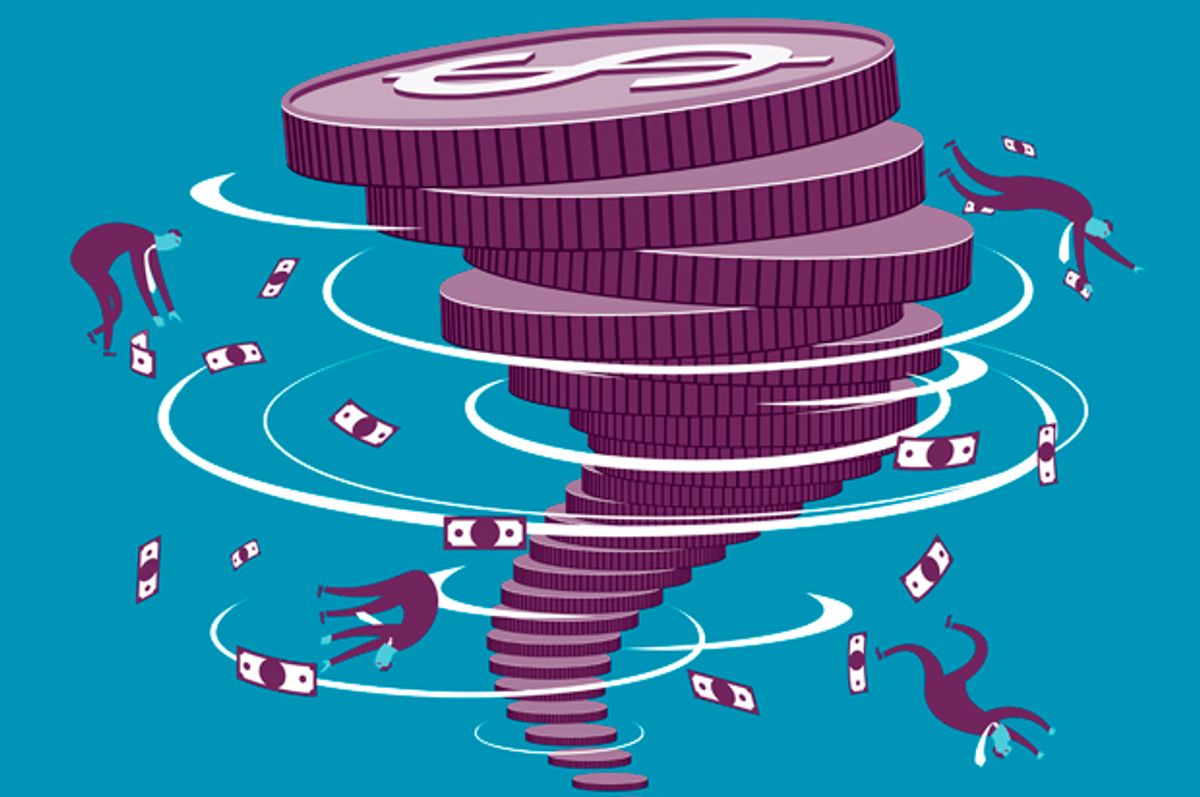 With so much attention paid to U.S. tech giants and their deep pockets (the kind that allow them to swallow $100 million start ups without missing a beat), it’s easy to overlook the fact that some corners of corporate America have worrisome debt problems. U.S. companies now have less cash on hand to than they did in the midst of the Great Recession, causing experts to warn that many could be at risk should the economy stall and borrowing costs rise as lenders tighten their purse strings. Some corporations, especially in the energy sector, are already struggling to survive under the burden of debt.

“The risks of such debt bingeing are all too familiar,” wrote S&P Global Ratings analysts Jacob A. Crooks and David C. Tesher in a report issued earlier this month. They added that increase in debt is “a clear cause for concern.”

Consider these facts: Five U.S. tech companies – Apple, Alphabet, Cisco, Microsoft and Oracle – held nearly a third of the $1.7 trillion in cash that American companies held in reserve as of the end of last year, according to rating agency Moody’s. Half of the country's current cash reserves (now $1.8 trillion) is held by just 1 percent of the 2,200 companies tracked by S&P Global Ratings.

Meanwhile the number of companies whose bonds have been downgraded to “junk” status is on the rise. They include well-known names like retailers Macy’s and Gap, telecom giant Sprint and Hess, the once-revered oil company. The number of these so-called “fallen angels” rose globally to 55 in the first six months of 2016, according to Moody’s, more than all of 2015. Those troubled firms will take longer than ever to dig themselves out of debt, on average more than eight years if every dollar of their operating profits were devoted to paying down debt, according to Bank of America Merrill Lynch.

Why are so many corporations rushing into debt? Rock-bottom interest rates. Companies are using low borrowing costs to buy back shares (which props up share price) and to fund merger-and-acquisition activities. Mutual funds are happy to lend, in part because government bond yields, like that of the popular U.S. 10-year-note, are so low these days.

“There’s a clear correlation between interest rates and level of debt, like a consumer who is more likely to buy a home when mortgage rates are low,” Michael Roberts, Professor of Finance at Wharton School of Business, told Salon. “With really low interest rates, you have to be aware of the incentive for corporations to build up debt that could set them up for problems down the road.”

Despite a slowdown in U.S. economic output, weak corporate earnings and slowing job growth, corporate-bond-based mutual funds added nearly $23 billion in over the year ending in July, according to Morningstar.

So should we be worried about a ballooning debt bubble?

According to Roberts, that depends. Most of the problems lie in two important sectors: energy and retail. The enduring global oil glut has forced many smaller U.S. oil, gas and energy companies to borrow more, and at higher rates, in order to survive. Brick-and-mortar retailers are taking on debt because they’re getting hammered by online retailers. Overall, the level of debt across corporate America is not particularly high — but again the cash-rich top 1 percent of companies skew those numbers.

A Salon analysis of data from the Federal Reserve Bank of St. Louis shows the debt ratio for non-financial companies in the first quarter of 2016 hit 29 percent, its highest level since the first quarter of 2012. (A debt ratio is analogous to comparing what you owe on your home to its total worth. For example, a $90,000 mortgage on a $100,000 reflects a debt ratio of 90 percent.) Current corporate debt ratios are lower than they were 15 years ago when they were as high as 33 percent. During the boom years of the mid-1990s they reached 45 percent.

Should the economy stall it would make it harder for companies to continue to service their debt, and the fallout would be significant. The “have not” companies that are struggling today would certainly be fighting for survival — or possibly fail outright — in an economic downturn.

“In any recession there’s going to be companies that are going to struggle with interest and principal payments, so it’s really a matter of the severity and scope of the impact,” said Roberts.  “At some level we should always be worried about corporate debt.”