Is blue the new green? Wave power could revolutionize the renewable-energy game

There's enough wave energy in the oceans to power the world, and scientists are finally close to harnessing it. 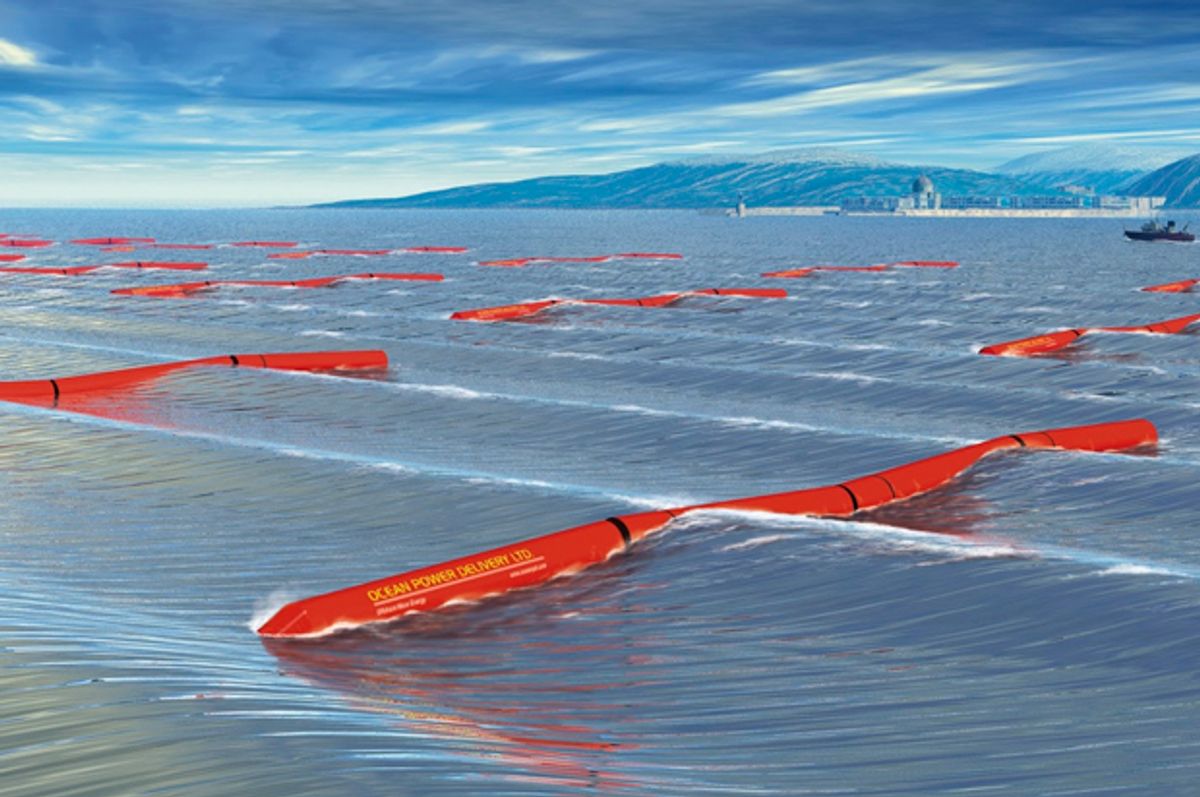 Unless you’re a surfer, a sailor or the owner of beachfront property during hurricane season, you probably don’t spend much time thinking about the power of waves. That may be changing soon.

Like a large, slowly building swell miles from shore, the wave-power revolution has quietly and gradually gained momentum. And this month it began the crest: The Department of Energy announced it would allocate as much as $40 million in funding to develop of the nation’s first open-water wave-energy-testing facility in a location to be determined.

When it comes to tapping the commercial viability of this renewable resource, we could be on the cusp of a tidal change. For decades wave energy has lagged behind wind energy  and solar, in part because harnessing it is so complex. It involves a number of factors — the speed, height, direction of a swell and the intervals between swells — and more variables equal higher costs.

Additionally, harnessing wave power involves installing costly equipment in a corrosive and treacherous environment. Then there’s the challenge of transmitting that energy from offshore to the power grid. These realities have scared away many would-be investors. Regulatory hurdles have put off others: In 2008, what would have been the first commercial wave-energy project in the country was nixed by California’s Public Utilities Commission, which said the technology was too new to be trusted.

Skeptics think wave energy will always be a younger sister to wind and solar. “It should be studied, and it should be part of the mix,” Luigi Martinelli, an associate professor of mechanical and aerospace engineering at Princeton University, told Salon. “I just don’t see it being a large part of our renewable portfolio.”

But many other American researchers continue to refine their wave-energy converter systems. That’s largely because the potential is so huge: A report from the Intergovernmental Panel on Climate Change suggests the power-generating potential of the world’s oceans exceeds human energy requirements. Imagine no need for  coal, fossil fuels, nuclear generators, solar arrays or wind turbines — and no need to rely on overseas suppliers. According to the U.S. Department of Energy, waves along American coastlines have the potential to generate as much 2,640 terrawatt hours a year — enough to power more than 200 million American households, free of emissions.

There’s more: Waves are more consistent and predictable than either solar or wind power, meaning it will be easier to plan the integration of wave energy into a power grid. They also pack a bigger punch. Water moving at 12 miles a hour (normal for a standard day at the beach) offers the same power potential as wind moving at 110 miles per hour (not so standard for a day anywhere).

The Scottish-built Pelamis, the world’s first commercial wave farm, launched off the coast of Portugal in 2008. The system, which consisted of four caterpillar-like converters spanning a total of more than 1,500 feet, began supplying 1,500 homes with clean electricity but was shut down after two months due to frequent breakdowns and financial struggles. The U.S. Navy-sponsored Azura system, however, currently powering a Marine Corps base near Hawaii's Kaneohe Bay on the north shore of Oahu has been successfully tapping the ocean's power supply for a year. The 45-ton floating device rotates 360 degrees and, unlike many other wave converters, is able to extract power from both the horizontal and vertical motions of the waves. Since March of last year a larger implementation, the first wave farm consisting of multiple units, has been making headlines in Australia.

In an effort to accelerate innovation and jumpstart commercialization, the Department of Energy has increasingly been funneling money into research and development. In 2015, the agency announced a Wave Energy Prize competition, or the ultimate science fair for America’s biggest wave-energy nerds. Ninety-two entries came from universities, startups and clean-energy companies that entered with a goal of doubling the output of existing wave-energy converters, as determined by a 2014 report from the National Renewable Energy Laboratory. The winner, assuming there is one, will be awarded more than $2 million and likely the backing of investors.

So far, more than 1,000 patents have been issued for wave-energy converter devices in North America, Asia and Europe. Some of these prototypes sit near shore, others offshore; some 40 meters below sea level and others on the surface. Made largely of steel, concrete or composite material, they’ve all been labeled according to three categories: attenuators (snake-like structures composed of semi-submerged cylinders that flex in wave action, kick-starting electrical generators), point absorbers (buoys that compress gas or liquid as waves bob them up and down, activating a turbine) and terminators (wide, floating reservoirs that sit perpendicular to a wave to intercept its energy before pressurizing it like a car piston).

“The main principle is always the same,” said Spyros A. Kinnas, professor of engineering at the University of Texas at Austin. “There’s a rotating portion, like a cylinder, that’s moved by wave action, and there’s a fixed portion. The relative motion of one to the other creates electrical energy that’s carried into the grid by cables.”

The Wave Prize entries work this way but many incorporate novel advances like the ability to submerge for protection during large storms. And some are difficult to classify at all. Take CalWave, the wave carpet entry from researchers at the University of California, Berkeley. The carpet, made from a proprietary material, covers 3 miles of coastline and works by mimicking a muddy seafloor, absorbing the energy of waves that pass over its surface. As a bonus, it multitasks by desalinating water for drinking.

Historically when it has come to advances in wave technology, necessity has been the mother of invention. In the 1970s, the oil crisis sparked a flurry of wave-energy research, which tapered off once the price of crude stabilized. Now as concerns about climate change intensify, experts are anticipating another research and development frenzy. According to a Department of Energy spokesperson, the goal is for 80 percent of the nation’s electricity to come from clean energy sources by 2035. Hence the rush for entrepreneurs to get their wave energy projects in the pipeline.

But will a single industry standard technology emerge?

“I wouldn’t say that,” said Marcus Lehmann, CalWave’s project leader. “Renewable energy is never going to be a monoculture — it’s always going to be a healthy mix. But our goal is to reduce costs. Our goal is to make it competitive.”