Why Colson Whitehead made the Underground Railroad real: "It's fanciful and childish, but it also had many possibilities"

Salon talks to the acclaimed author about slave narratives, eugenics, Westerns, immigration and, of course, Oprah 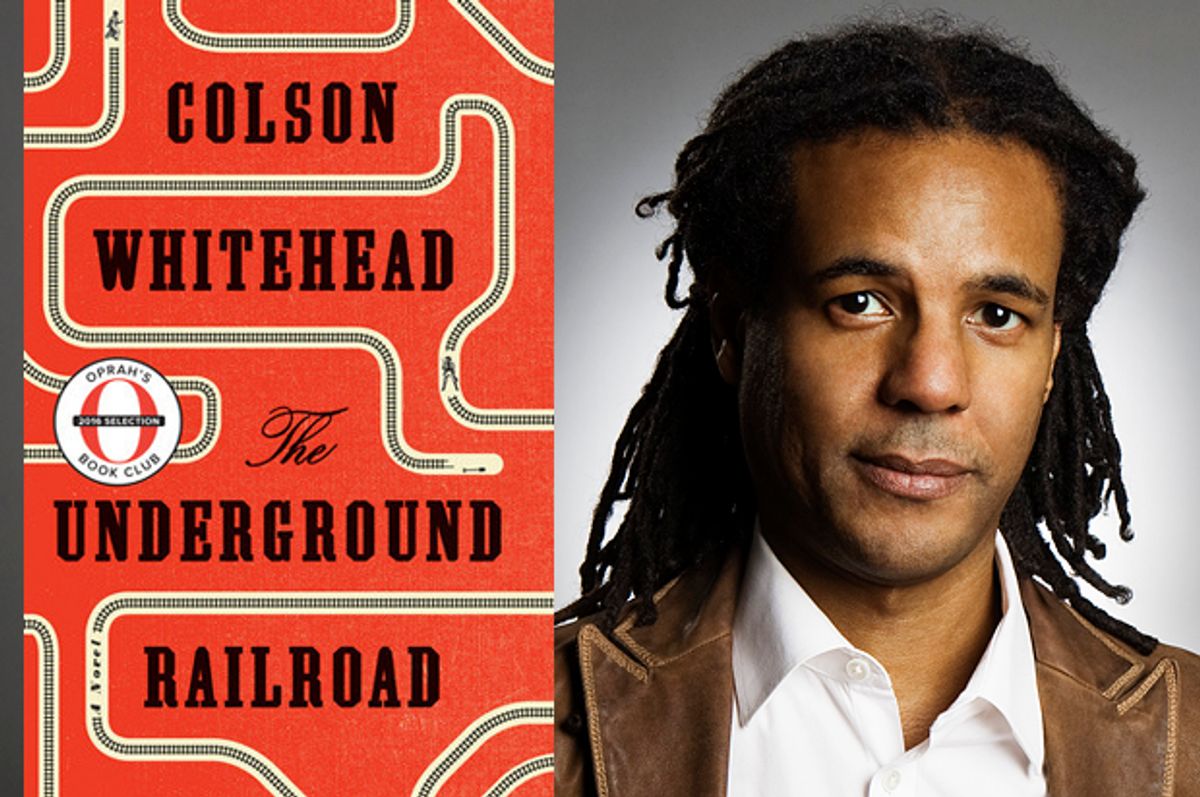 Colson Whitehead is a writer with a tremendous ability to blend disparate genres into valuable social commentary. A recipient of the MacArthur (the so-called genius grant) and Guggenheim fellowships, Whitehead is the author of six previous novels, including “John Henry Days,” a finalist for the Pulitzer Prize, and The New York Times bestseller “Zone One,” a zombie tale set in New York. His new novel, "The Underground Railroad," manages to blend the slave narrative, immigrant tales and tropes of Westerns into something that raises the novel above mere literary or historical fiction.

Predicated on the question "What if the Underground Railroad was a literal railroad?" the novel follows Cora and Caesar, two runaway slaves, who are pursued by the relentless slave catcher Ridgeway. They take the railroad to new locations, finding new, unfortunately familiar, struggles as they adapt to life in free society. Whitehead's alternative American history carries echoes of the real thing: Forced sterilizations and eugenics experiments aren't just the stuff of dystopian historical fiction.

Recently, the book was lauded by Oprah, earning her coveted book club seal of approval and launching Whitehead’s work into a new strata of popularity.

Salon spoke to the author on a recent Tuesday morning. Affable even during breakfast hours, Whitehead was able to describe his process while keeping a sense of humor about it all.

The new book is a lot grittier than other historical novels interested in similar territory. How much research went into getting the uglier aspects of that era correct, not in terms of brutality, but form?

I can’t comment on how other authors do research. But a lot of that understanding came from reading slave narratives. There’s a great book called "Bound for Canaan" that came out few years ago and that served as a major touchstone. It’s an overview of the Underground Railroad. Harriet Jacobs’ story of escaping and living in her grandma’s attic for two years inspired that section in my book with Cora. Harriet Tubman’s biography was helpful. Also, the [Works Progress Administration] collected slave narratives, which really helped me to learn about the forms of brutality that were around..

The character of Cora is written so beautifully. What sort of decisions went into making sure she never pandered or cowtailed to Caesar?

I think the first time we meet her, she’s sitting on a stump of maple overlooking her garden. The incident where she’s protecting this land from interlopers defines her character. She doesn’t have much but will protect it fiercely, whether it be from slave owners or other, abusive slaves. Part of her journey in the book — despite having so little agency — is coming into her own and really claiming the reins of her life in ways she couldn’t have before.

Writing female characters is something you do particularly well. I also think they tend to be of the same ilk: clever, soulful but not weak, and above things without risking pretension. Do you find these characters easy to conjure, or is it always a struggle to maintain that elevated sense of self and dignity?

Any character, be they male, female or whatever, should be approached the same way. My job as a writer is to make my characters as realistic and credible as possible. I’m always calibrating, and whatever the character type is, it’s all part of the job.

A lot of your work subverts easy categorization by playing in different genres simultaneously. For the new book, there are elements of the Western and immigration narratives, but it's a little more straightforward than not. I was hoping you could speak to how you arrived at the idea for this and when you knew you had enough material to start drafting.

For me, when something clicks, I’m really eager to start writing. Even though I knew I’d have to put Cora through a lot, which created more trepidation than usual, I was still excited to start working on the book. As an American, I’d consumed Westerns in many forms.

In terms of the stuff pertaining to things like eugenics experiments, that all came from things I read in college. A lot of this was stuff I first encountered in college that just stayed with me. Once I decided to make the metaphorical railroad real, I think, this book allowed me to play with time and mess with things I’ve been thinking about in one package.

Was this project one that had a long gestation period or was it almost a surprise to realize that you had a book idea involving the Underground Railroad? Every writer has his or her interests or fixations, but for someone so chameleon-like in regard to genre, I can't imagine this was a fixation.

I wouldn’t say it was a fixation. But I would say it was something that I thought might make for a fruitful premise. The idea of "what if the underground railroad was actually real," is, in many ways, something we picture in elementary school. Yes, it’s fanciful and childish. But it also had many possibilities and that got me thinking about all of this in an active way.

As I mentioned a bit earlier, the experiences that Cora and Cesar have when beginning their new lives are similar or at least rendered like those of immigrants. Was this something you consciously considered or does the slave-to-free-citizen narrative just lend itself well to assimilation stories?

Let's talk about the idea of evil in the book. I think one can infer that there's a distinction between the plantation owners and Ridgeway, albeit a small one. The owners are just flexing power by way of cruelty, whereas Ridgeway, who acts wickedly, is more broken and wayward. When chiseling out these characters and fleshing out their backstories, were you thinking at all about what constituted implicit evil versus what just passed for acceptable behavior or viewpoints at the time?

I wasn’t thinking of evil with a capital E, so much as the crappy way we generally treat each other. Slavery erased all humanity in those who were enslaved, which begot cruelty as a means of survival on plantations. So I was thinking about the bad behavior of conformity and how it played out within the corrupt ideas of estates in North Carolina. People would turn on each other; they’d turn whites in for harboring black fugitives. Again, I was thinking about this not so much in terms of outright evil, but rather the connection between mistreatment and human frailty.

Do you feel or notice change in the kinds of stories you'd like to tell at this point? So much of your work deals with New York, youth or an idea of self-containment. I'm curious if you see this novel as a sort of arrow or light that might lead to larger or at least more open kinds of work.

I’m not sure what’s going to come next. I had an idea for a book about a journalist that’s sort of a contemporary New York novel. I’m not sure if I’m going to do that. I’m also mulling over a book that takes place in New York in the 1960s, so it’s a New York book but not a contemporary one. The topics I return to — pop culture, race, New York City, technology — are things I’m always trying to tackle in new ways. "Sag Harbor" was a big separation from where I used to be and where I am now. I think it worked as a character study, was much more open than previous works and empathy’s been more present in the books I’ve penned since.

Do you think books that appropriate or play with history are easier to market? Or does the idea of literary fiction, no matter the subject matter, still connote something that pushes the general reader away?

I’m not sure how different labels affect different people. The historical novel category is one I don’t really understand because the signifiers are so vague. I like well-written books. And I think a well-written book that takes place in the past can stand outside the genre. Usually, in terms of reading, I rely on writer friends for recommendations and go from there.

What was it like to get the Oprah endorsement? As a writer who’s been churning out a steady stream of terrific books, do you feel strange about the attention the novel is receiving? Or are you kind of going, “It’s about time?”

Well, I think my books are good. I do the best I can and want as many readers as possible to come to them. It’s interesting to me that a book predicated on the question of what if the Underground Railroad was real is the one people are seizing onto. As a reader, I can read review of other books and think, This is not really for me. Oprah’s endorsement brings the book to people who otherwise might not be swayed. I think it’s great. Honestly, I’ll take any endorsement that comes my way, except for Donald Trump’s.