Inclusion is key to better TV: It's time to reframe the "diversity" conversation

Reflecting what America looks like, in front of the camera and behind it, is the way to lasting change 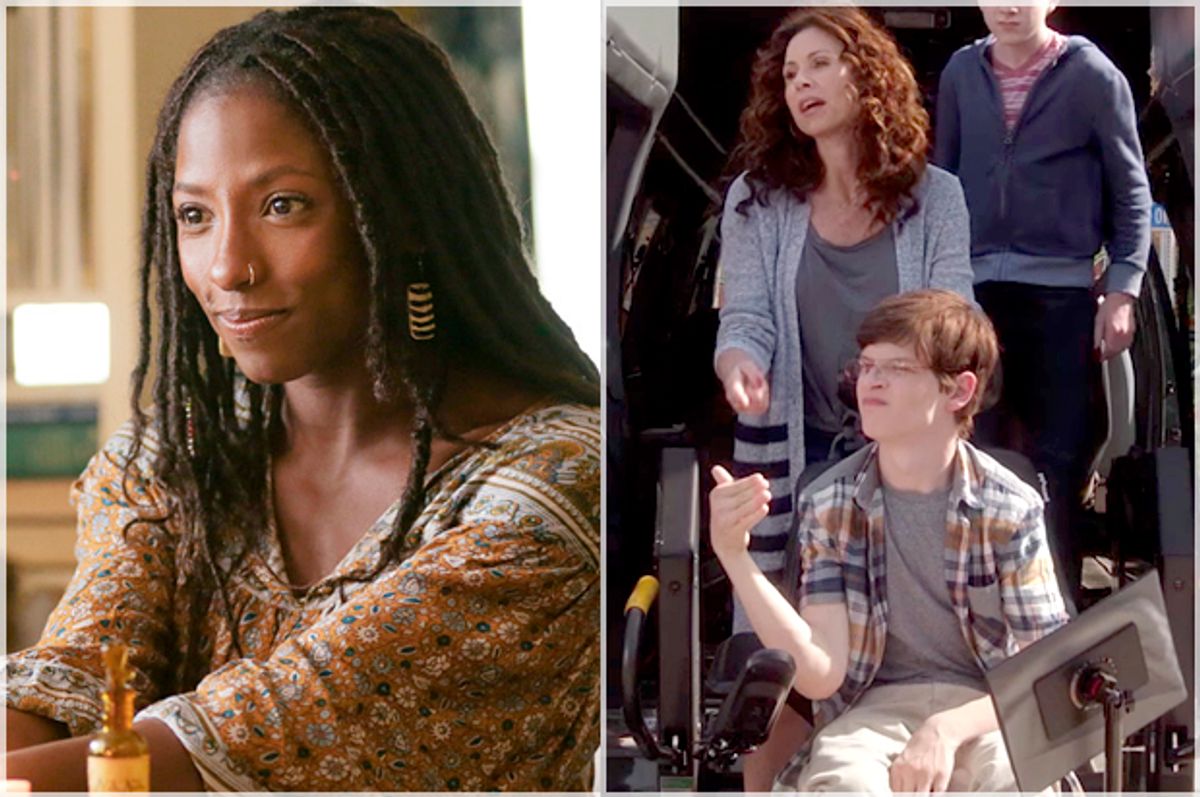 Diversity is having its moment again in Hollywood.

If you’re a person who champions the idea that the shows you’re watching should more accurately reflect the varied experiences of the country’s population, that sentence should irritate you. It may be especially vexing for people with long memories, who recall the last time Hollywood made an effort to put diversity at the forefront of its hiring and development efforts. And the time before that.

As this Christian Science Monitor piece published 1982 shows us, diversity in Hollywood is a little like flared jeans, cycling in and out of fashion every few years.

The Writers Guild of America and/or the Directors Guild of America releases a report, or a major media outlet publishes a story on the paucity of minority leads, directors and writers working during a specific television season. Audiences and organizations such as the NAACP express outrage.

Television networks reply with a form of “We need to do better!” after which black, Latino, Asian and a couple of Native American actors and actresses suddenly pop up as series regulars on several popular shows. In particularly fashion-forward years, maybe a network will take a chance on greenlighting a series starring a person of color. Ta-dah! Diversity! Audiences and the media are appeased. Executives pat themselves on the back.

But like every pair of comfortable jeans, it only takes a few passes through the laundry cycle before the color fades out. Eventually every one of these “diverse” shows ends and, season by season, the schedule gets whiter. Then a new series of reports emerges. Wash, rinse, repeat.

There are many reasons that the hiring rate of minority writers, directors and talent waxes and wanes over the years, all of which start with industry attitudes and practices that are perpetuated by the people at the top and trickle down.

But what would happen if we examined the impact of the word "diversity" itself? What if, instead, the industry were to reframe the conversation to prioritize inclusion?

Looking at one term versus another may seem like a matter of semantics. But for an industry that has long placated audiences by moving the needle based on data, it’s a radically different way of thinking.

Paying attention to diversity makes good business sense in the long run. According to U.S. Census Bureau statistics, ethnic minorities will become the majority of the U.S. population in 2044. More than half of the births in the U.S. since 2013 have been to people of color.

Networks don’t even have to look to the future to find reasons for investing in inclusivity now: African-Americans, Asians, Latinos and Native Americans currently wield a combined purchasing power of $3.4 trillion — a huge incentive for advertisers.

Even so, in industry terms, showing a commitment to diversity tends to mean scanning the roster and adding a bit more melanin into a few casts. For a time, that was enough — and for people of color struggling to get a foot in the door, it means finding more work.

Satisfying basic diversity requirements does not necessarily translate to audiences seeing an increase in broadly appealing stories that reflect the people and the world around us, though. Adopting an attitude of inclusion does.

“We have to move past the ‘ticking a box’ stage into proper hires,” said Victoria Mahoney, who has directed several episodes of the Starz comedy “Survivor’s Remorse.” Speaking to reporters at the Television Critics Association’s summer Press Tour in Los Angeles, the veteran director explained that the difficulty she faces is twofold.

First, in spite of having directed television for five years, her experience is still doubted by those who would hire her. Second, she must constantly battle the misrepresentation that directors of color aren’t available or don’t exist.

Director Ava DuVernay, who serves as executive producer of OWN’s upcoming “Queen Sugar,” cited the difference between the two concepts in a recent interview featured in The Hollywood Reporter.

Where diversity pushes to get more men and women of color into director’s chairs and writers' rooms, inclusion is about keeping those people in those positions, promoting them to the head of table or making them the star of the show. It means letting their perspectives add fascinating new tones to established storytelling formats.

DuVernay demonstrates what inclusion means by staffing the majority of “Queen Sugar’s” writers' room with people of color and women, and ensuring that each of the first season’s 13 episodes was directed by a woman, including Mahoney.

“I believe there's a special value in work that is a reflection of oneself as opposed to interpretation,” DuVernay told THR. “When I see a film or a TV show about black people not written by someone who's black, it's an interpretation of that life.”

On cable, it's starting to happen

Making the transition from an environment that opens and closes the diversity spigot every so often, into one that practices inclusion as a matter of course, may be moving forward more quickly on cable. Credit the niche nature of subscription-based channels for this, as well as cable’s ever-growing need to find fresh content.

Starz has “Power” and “Survivor’s Remorse” in its roster, both anchored by African-American ensembles, with a superhero series, “Tomorrow Today,” on the way from “Power” executive producer Curtis “50 Cent” Jackson. Also in the works is a series adaptation of Alisa Valdes’s novel “Dirty Girls Social Club,” and the highly anticipated “American Gods,” featuring an international multi-ethnic cast.

Speaking to the success of “Power” and “Survivor’s Remorse,” Starz CEO Chris Albrecht touted the fact that black, Asian-American and Latino people play significant roles in front of and behind the cameras of both shows.

“Their incredible season over season growth is a testament to how vital diversity is in entertainment and to our success as a programmer,” Albrecht told reporters.

Elsewhere, FX president and CEO John Landgraf recently revealed the steps his network has taken to increase the hiring of female and minority directors. At a press tour, Landgraf touted that FX increased its minority and female director hires from 12 percent in the 2014-2015 television season to 51 percent at present.

Again, that’s diversification. However, this fall FX is debuting “Atlanta” from Donald Glover, who created, produces, writes, stars in and directs the comedy along with director Hiro Murai. Eschewing glamour, “Atlanta” depicts what life is like for the city’s poorer residents through the eyes of Glover’s character Earn Marks.

Elsewhere, both HBO and Showtime have series on deck starring men and women of color; HBO scored a coup in “Insecure,” which was created and is executive produced by its star, Issa Rae.

Showtime, meanwhile, will debut the limited series “Guerrilla” in the spring, which is written, directed and produced by Oscar winner and Emmy nominee John Ridley, with Idris Elba producing and co-starring. It also greenlit a pilot based on an idea from executive producer Jamie Foxx, with former “Saturday Night Live” player Jay Pharoah in the lead role.

This is by no means an exhaustive list, and by adding in streaming services such as Hulu (home of “The Mindy Project”), Netflix (“Marvel’s Luke Cage”), and Amazon (“Transparent”), one sees even greater opportunities for creatives and executives to champion inclusive hiring and storytelling.

A tale of two networks

On broadcast, meanwhile, there are fewer new series starring men and women of color, although a number of new series on Fox, NBC and ABC feature minorities as co-leads or in prominent supporting roles.

For his part, Kenya Barris, creator and showrunner of ABC’s Emmy-nominated comedy “black-ish," is flat-out tired of talking about “diversity.” The strength of his series is the way that it mines comedy from universal situations that grow out of his own experiences, or those of his writing staff. That there are episodes that happen to deal with racial profiling or using the “N” word reflect the perspective he brings to the script as a black man in America, but it doesn’t exclude the wider audience from enjoying itself.

“I would be so happy when diversity is not a word,” Barris said with a note of fatigue during a Television Critics Association press conference. “I have the best job in the world, and I am constantly having to talk about diversity … These are amazing talented actors and amazing writers who give their all … and it’s clouding the conversation."

For another illustration of the difference between “diversity” and “inclusion,” take a look at CBS’s fall line-up versus ABC’s.

When CBS Entertainment President Glenn Geller appeared before the Television Critics Association earlier this month, his press conference was loaded with mentions of diversity, diversifying and being diverse. A combination of those terms was used by Geller and reporters 34 times in all, in less than 30 minutes. If those in attendance had been playing a “diversity” drinking game, scores of reporters and industry reps would have died of alcohol poisoning before 10 a.m.

Geller was quick to announce a slew of actors and actresses of color who had been bumped up to series regulars or were joining veteran shows as proof of the network’s commitment to diversity. The network also paneled midseason series “Doubt,” which co-stars transgender actress Laverne Cox, part of an ensemble led by Katherine Heigl and Dulé Hill.

White actors headline all of these series, joining a schedule very much lacking in diversity, to use the term intentionally.

All 10 of the showrunners for the network’s fall programs are white, and the majority of the scribes in the networks’ writers' rooms are also white. In fairness, CBS isn’t alone in this territory. Variety recently crunched the numbers for a fall across all broadcast networks, and found that 80 percent of the showrunners for all new broadcast network programs are male, and 90 percent are white.

ABC can’t brag about adding any minority male or female showrunners to its lineup either; then again, it already has “black-ish,” and “Fresh Off the Boat,” which features an Asian-American family and was created by Nahnatchka Khan. It’s also home to “The Real O’Neals,” with stories told from the perspective of a gay teen.

Joining that lineup is “Speechless,” a new comedy with Minnie Driver portraying the driven, overbearing mother to a teenager with cerebral palsy, played by Micah Fowler. “Speechless” is one of two ABC series featuring children with special needs; the other is “American Housewife.”

“Speechless,” though, is remarkable for a number of reasons, foremost being that it is written to showcase Fowler’s comedic abilities.

“If you just hear the logline of a show with a kid with a disability, it suggests that ‘after school special’-ness. And that’s why we were really vigilant about doing everything we could to subvert that as early as possible in the pilot,” explained Scott Silveri, the comedy’s creator and executive producer. “…We’re very aware of the tropes and wanted to make it as active as possible."

Emphasizing Fowler’s contribution to the show’s playful tone is notable, given the delicacy with which television has long treated characters with disabilities. One of the more winning aspects of his character, JJ, is how ruthlessly acerbic he can be without saying a word. Fowler appreciates that as well. Asked what the biggest difference is between past roles and his “Speechless” character, he simply replied, “JJ is funny.”

That, too, is an example of what’s great about inclusion.