Students suck, professors don’t care and other myths you shouldn’t let ruin the start of the school year

With the pressures of modern society, millennial college students "can’t afford to be" as aloof as critics allege 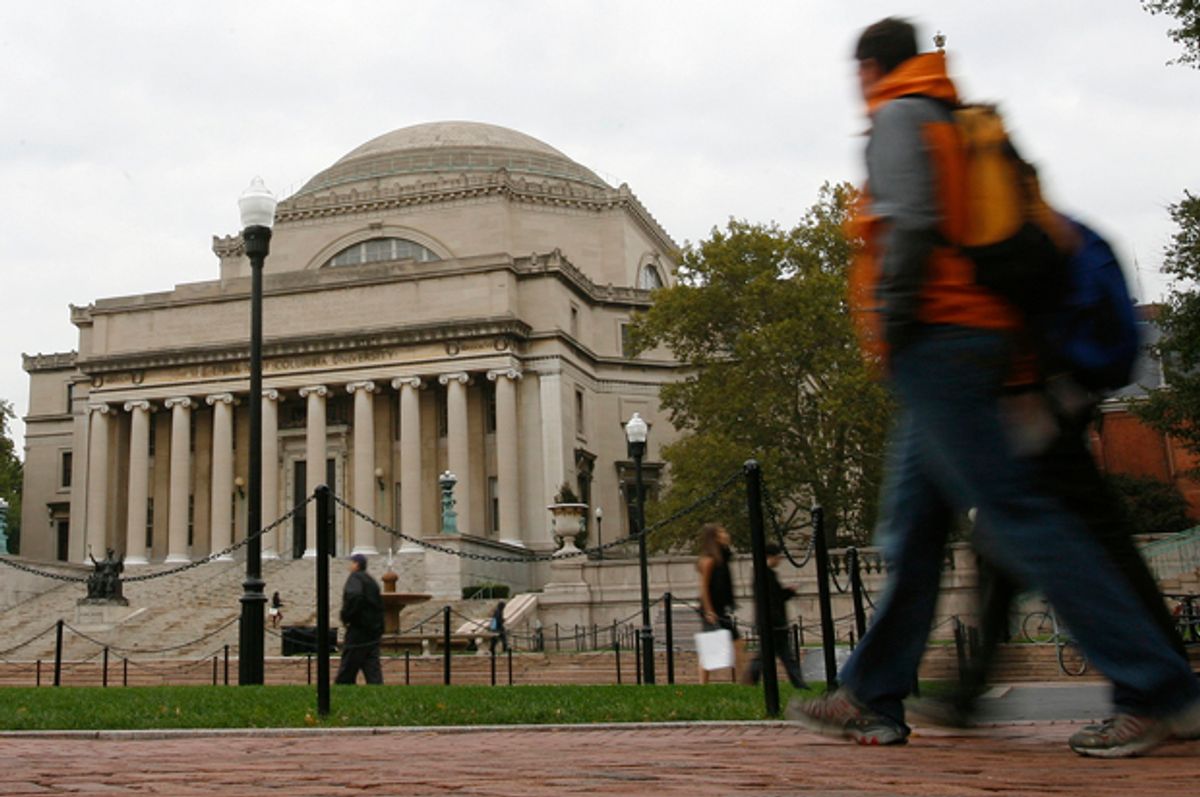 Back to school means back to bashing students.  Maybe it’s time to end that trend.

It’s that time of year again.  As many of us get ready to start the school year, we are bombarded by articles, stories and memes that mock students and denigrate the professors that teach them. By now you have probably seen at least a few articles offering sage advice to this year’s incoming class of college kids. Maybe the article comes in the form of a handy list or maybe it is just a basic rant about how pathetic students are these days. You have likely already seen that meme of an Einstein look-alike professor sporting an “It's in the syllabus” T-shirt. It all seems very funny and very wise so your instinct is to share it.

Consider this: When in the last decade have you gone online and read anything positive about the start of the school year? When have you read that the next class of students is extremely bright and promising? That their professors are dedicated and hardworking? Or that their places of higher education are preparing them well for their futures?

We live in an age where college aged students — millennials — are the most maligned generation in decades. They are described as lazy and clueless and selfish.  Stories of them taking selfies, refusing to grow up and move out, and freaking out over trivial issues abound.

And yet, they hold down jobs while studying, they double major, they work unpaid internships, and they carry more student debt than we have ever seen in our nation’s history. They volunteer more than their elders. They are more socially progressive and more engaged politically than boomers were at their age. They are also fully aware of the reality that a college education is the key to financial stability. Data attests that this is a generation of hardworking, socially aware students.

But that won’t stop someone like Shannon Read from writing a piece for The Washington Post on “The 7 things new college students don’t know that drive professors crazy.”  Her top piece of advice? Tell kids they “aren’t in charge in the classroom.”

Now I am not saying that there are no valid criticisms of spaced-out college kids who forget to treat their teachers with respect or even buy their books for class, but the idea that we could have students poised to enter college without the idea that they are not “in charge in the classroom” is truly ridiculous. Our college kids come out of the most punitive and rule-based grade schools in the developed world. They have more homework and more standardized tests. They have graduated from schools with “zero tolerance” policies and strict dress codes. They know full well they aren’t in charge.

This generation is more unemployed than their elders, carries more debt and is inheriting a planet convulsing in crisis. They are not clueless and they are not unaware.  They can’t afford to be.

And yet, the rhetoric about this generation continues to be out of sync with its reality. Beyond the traditional generational bashing common to elders, the attacks on millennials reflect the economic and political realities of our society — a society that is increasingly inclined to blame the victim and to view social crises as personal problems.  The neoliberal market mentality trains society to see all issues as “privatized” — stripped of any link to a larger social system and of any civic responsibility to help.

The articles that condescendingly — or in some cases gently — school the students on how to succeed in college almost always omit the real pressures these students face.  It’s important to note that “the 6-year graduation rate for first-time, full-time undergraduate students who began their pursuit of a bachelor's degree at a 4-year degree-granting institution in fall 2008 was 60 percent.”

But you’ll never see that data in any of these smug essays. Instead of giving an honest and open appraisal of what it means to enter college today —taking on debt in the face of an uncertain future — these articles read like elementary-school primers or Miss Manners folios.  Rather than send a note of encouragement and support, these pieces infantilize the very people we argue are not acting like adults.

The point is that these advice columns “privatize” student problems and ignore the fact that some of the trends we are seeing in classroom behavior are tied to larger social crises. They are the result of a generation of kids that carries not just more debt, but more stress than society has ever expected college kids to manage. The New York Times has reported an increase in student suicide rates and “a survey of college-counseling centers has found that more than half their clients have severe psychological problems, an increase of 13 percent in just two years.”

Despite these challenges, this is also a generation that shows profound resilience, tenacity and educated optimism. They opt to donate organs and blood more than their elders. And they donate to charity. There is significant research to show that when it comes to “habits of the heart” this generation is far more open, warm, and socially engaged than we have seen in decades.

And yet this generation of college students has been called “the lamest generation.” According to generational scholar Russell Dalton, millennials have been depicted more negatively than any of the preceding generations in our nation. Dalton’s research shows that millennials may be the most publicly attacked generation of all time.

Not only are the students suffering from a nation-wide habit of demoralizing them, their professors are under attack, too.  If you thought it was hard to find any articles saying something positive about students, try finding one about a professor.

If there is something wrong in higher education, it is always the professors to blame. This week, U.S. Senator Ron Johnson, R-Wis., claimed that students would be better served by learning from documentaries rather than teachers. He claimed that the “'higher education cartel’ is raising prices and preventing reforms that would help college students learn at affordable prices.”

Johnson ignored the reality that 70 percent of faculty are not on a tenure track or part-time.  Adjunct faculty earn, on average, $20,000 to $25,000. Hardly a cartel of power brokers. Most faculty members are barely eking out a living and a significant amount of them are on food stamps, yet they are depicted as materialistic ogres who inflate tuition.

Johnson also ignores the reality of higher-education funding. Tuition is going up mostly as a result of the lack of public funding. In Johnson’s state, Gov. Scott Walker defunded the University of Wisconsin system by $300 million.  Guess who has to make up the difference? Students with their tuition payments and faculty with salary freezes or cuts. Rather than admit the realities of shifting public support for education and the burden that this places on students, it is far more convenient for Johnson to blame the professors for the problem.  That narrative — like the one that bashes millennials — has become dominant.  It has no basis in fact, but it plays well.

Professors aren’t just blamed for high tuition; they are blamed for caring about what happens in their country. Stanley Fish recently wrote a New York Times piece admonishing professors for daring to “opine” about Donald Trump.

Fish has long taken a neoliberal view of faculty. Channeling his own inner sweatshop manager, he once wrote a piece suggesting that faculty should not have “time” to have an opinion about politics. There is much that is wrong about Fish’s arguments, as pointed out by David Palumbo-Liu, but the important take away is that Fish’s narrative has dominated public discourse. Despite the fact that a Donald Trump presidency would likely destroy our institutions of higher education — and possibly the planet as well — professors are publicly shamed if they choose to exercise their civic and scholarly rights and weigh in on the subject.

This all means that as professors and students head back into the classroom the public narrative is that they suck: They aren’t good at what they do. They are selfish. And they are a problem for society. While there will always be the frazzled or clueless college kid and the absent-minded or bombastic professor, the truth is that these are not the norms. The myths don’t line up with reality.

It is not just that these myths are wrong; it is that they are damaging. Starting the school year amid a flurry of negative hype simply drains the spirit, no matter how false. It’s exhausting and demoralizing.

So why would one want to participate in bullying our nation’s youth and the people who have dedicated their lives to teaching them? Think about it. Why have we become accustomed to these attacks? And why would we want our students and their professors to start the year feeling crappy about themselves? Even if we agree that there is serious work to be done to improve higher education, this sort of bashing serves no useful purpose at all.

Maybe it is easier to mock students and their teachers than it is to face the real challenges in higher education. Maybe it is just funny to share that meme of a student texting in class. Or maybe it is time to end this nonsense and start the year encouraging students, supporting their faculty and struggling to improve the places where they have chosen to study.