Where's the diversity in media? How newsrooms fail to reflect America and why it matters

Too often, there's only one person among the reporters and editors to speak up for diversity 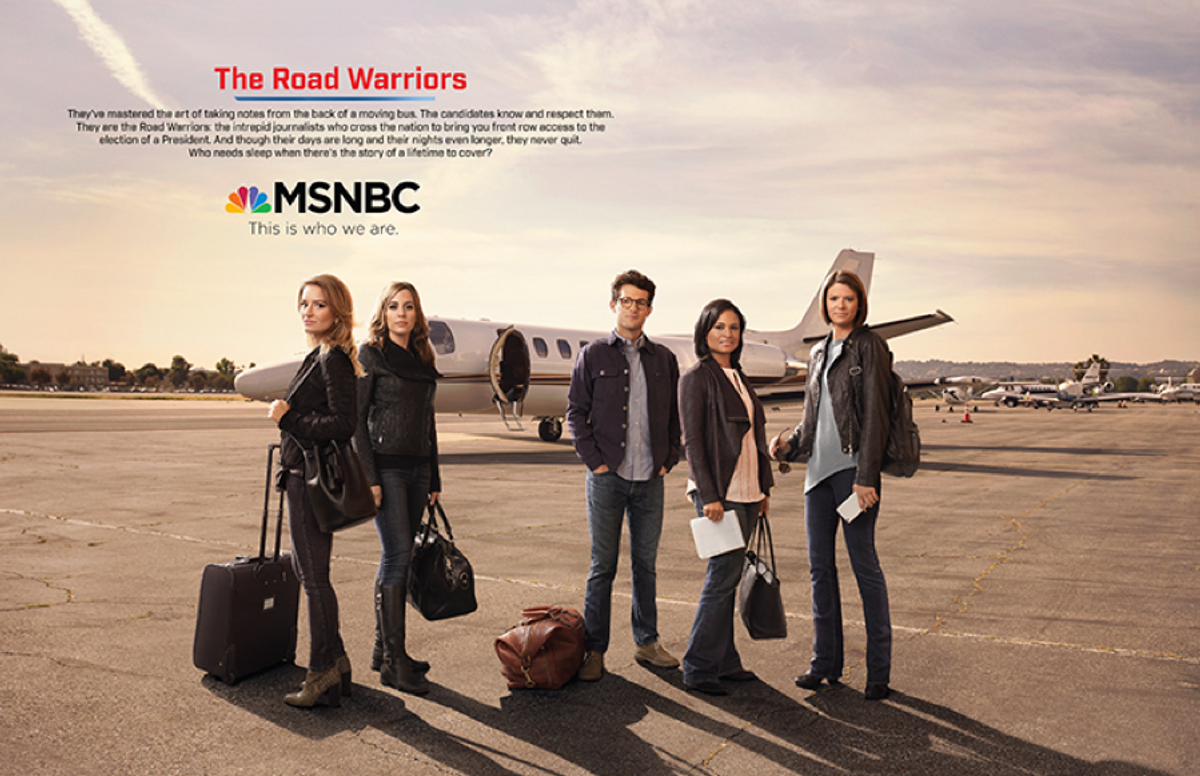 This ad in The Washington Post jumped out at me. In one tight photograph, it quickly telegraphs what’s wrong with the news media today and why the audience isn’t growing.

Yes, it’s great to see young women flourishing on the campaign trail. Yes, the casual chic may appeal to some millennials. But given that our country is on its way to the long-dominant white majority becoming the minority, this photo doesn’t reflect society. If I were an African-American or Hispanic — and I’m not — I would not see myself in this photo. (OK maybe if you look really closely you might discern that Kristen Welker, second from right, is biracial. Her mother is black and her father white.)

Currently, minorities make up 37.02 percent of the U.S. population, according to the U.S. Census Bureau. No newsrooms match this.

For more than a decade, the number of journalists of color in daily newspaper newsrooms has hovered between 12 and 14 percent, according to the American Society of News Editors, which began a newsroom newspaper employment census in 1978. (That year, only 3.95 percent of full-time journalists were minorities.)

“Minority representation in the newsroom and digital properties are still shockingly low,” said Donna Byrd, publisher of TheRoot.com, which has an African-American-centric focus, at the convention. “There’s still quite a lot of room for opportunity and growth. There’s progress being made but there’s a long way to go.” She added that “masthead” management still tends to hire voices they are used to seeing.

There is good news when it comes to television, according to the Radio-Television Digital News Association. Its survey with Hofstra University found the minority workforce in local TV news rose to 23.1 percent. Percentages are highest in the top 25 markets. Television tends to better reflect the population because it’s a visual medium and viewers can plainly see the ethnicity and gender of a reporter or anchor.

The numbers were doing better until 2008, when the recession started decimating newsrooms, and minorities were disproportionately affected,” said Eric Deggans, author of "Race Baiter: How the Media Wields Dangerous Words to Divide a Nation." “Newsrooms have a set of priorities. Diversity is ninth or tenth and when the downturn came, it slid off the table.” The 2008 downturn largely hurt minorities because “last hired” is often “first fired.”

When we asked MSNBC about the lack of diversity in its “road warriors” ad, the network responded by providing a list of its on-air talent of color, a list of eight that includes Welker and José Diaz-Balart, although he has left his regular gig on the cable channel’s air for a seat at the NBC Nightly News anchor desk (weekend edition). A promised breakdown of MSNBC’s staff demographics didn’t arrive by deadline.

Census projections indicate that minorities will become a majority in the United States by 2044, which makes it imperative to have more diverse voices and perspective in traditional and digital media.

For starters, diversity is good for business. If the audience doesn’t see itself reflected in news stories, then minorities often think their interests are being ignored, misinterpreted, distorted or undervalued. The downside is the audience goes elsewhere at a time when growing the audience is critical to a news operation’s sustainability.

If I see a panel on Sunday morning political chat shows with mostly white men, I’ll turn the channel. Producers of Sunday shows are slowly filling chairs with more women and people of color, but they still tilt largely to white males.

Kevin Riley, editor of the Atlanta Journal-Constitution, told Nieman Reports that a diverse staff results in better journalism for readers. “That’s sort of the business payoff,” he said. “This is beyond just a nice idea, beyond the right thing to do, and beyond recognizing our troubled history around race. It’s a business imperative.”

If the minority population is growing steadily, then common sense would say news organizations should be doing everything they can to attract minority audiences and better explain the complex issues America faces.

But in a 2014 study by the American Press Institute and the Associated Press-NORC Center for Public Affairs Research, only 25 percent of African-Americans and 33 percent of Hispanics said they felt the media accurately reflected their community.

How can any news organization reflect a community if there aren’t a variety of non-white voices inside the newsroom?  Diverse voices often conquer a common newsroom malady: groupthink.

For Deggans, there’s an ethical value connected to accuracy. To accurately cover immigration, policing in poor communities, rising incarceration rates and the #BlackLivesMatter movement, you need the input of a diverse staff — staff members with firsthand experience with these issues.

“That level of coverage is much, much more difficult without a diversity of staff at all levels of the news organization,” Deggans said. “So even though there’s a fairness and social justice component to giving women and journalists of color equal opportunities in newsrooms, the overriding issue in my estimation, is the increased fairness and accuracy of coverage which results from a staff whose diversity matches the community it is covering.”

What stories aren’t getting told?

Art Holiday is an African-American who has worked for 37 years at KSDK, a TV station in St. Louis. Right now there are no people of color in his newsroom management team, he said at a panel on race in the newsroom at the NABJ/NAHJ convention.

“That presents a challenge in our newsroom — especially during Ferguson,” said Holiday. He’s referring to police in Ferguson, Mo., shooting unarmed, black, 18-year-old Michael Brown two years ago, sparking massive demonstrations. After an editorial meeting at that time, Holiday’s associate news director took him aside.

“I was asked if I ever had any run-ins with the police,” said Holiday. “It caught me off guard. I knew she grew up in a rural, predominantly white St. Louis.”

He shared a story of driving to work for an early morning shift when the police pulled him over. He began his mental checklist. Keep your hands up. No sudden movements. Be polite.

“She was fascinated,” he recalled. “I told her most black men in America have had experiences like that and that’s why we are covering Ferguson and the interaction of the police and people. She agreed. That’s an example where diversity of age, race, socio-economic and gender backgrounds all make us better able to reflect the issues and stories in our communities. As a senior on-air person, I feel it’s my duty to speak up.“

There’s still too much pressure on the lone minority voice to speak up in most newsrooms.

“I am constantly having to speak up for all women if I’m the ‘only’ at the table — the only person of color, the only woman,” said S. Mitra Kalita, vice president for programming, CNN digital. “Sometimes I’m the only, only, only at the table. I do feel this need to speak up for women holistically and I hope women in positions of power feel a similar feeling of responsibility.”

But speak up they must, because telling stories about communities and issues we rarely hear about and reaching those communities is critical to better understanding and respecting one another. And, it negates the necessity of a story on TheRoot.com we shouldn’t need: How to Explain Black Lives Matter to White People.