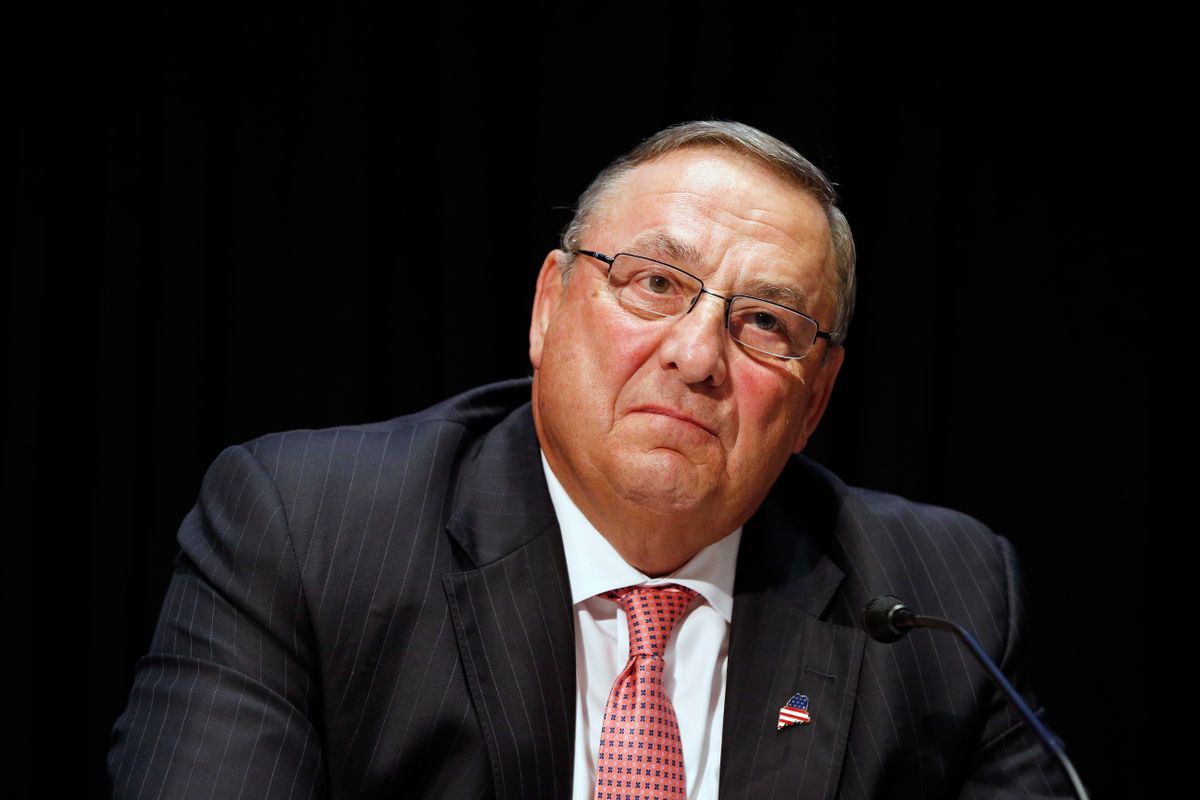 FILE- In this June 7, 2016, file photo, Maine Gov. Paul LePage attends an opioid abuse conference in Boston. LePage is being accused again of making racially insensitive comments, this time by saying photos he's collected in a binder of drug dealers arrested in the state show more than 90 percent of them are black or Hispanic. The governor made the remark at a town hall in North Berwick, Maine, Wednesday, Aug. 24, 2016. (AP Photo/Michael Dwyer, File) (AP)
--

The Trumpian universe vacillates between dumb and evil, sometimes in the same sentence. Following their fearless leader, Trumpians talk (or tweet) first, and think later, or perhaps not at all.

When that fails, they simply deny saying what they said, or that words have any meaning. Or they just keep saying things that are demonstrably untrue because they feel true.

Examples abound from the week that was, starting with the family.

Donald Trump’s gifted son Eric has revealed the original lie of his father’s campaign. No, it is not President Obama’s Kenyan birth, or secret status as a Muslim “Manchurian candidate.” It is something a bit more mundane, but no less dastardly. And it’s a Christmas story. Who doesn’t love a Christmas story?

Turns out Trump entered our political sphere because the Obama/Grinches stole Christmas. "He sees the tree on the White House lawn has been renamed 'Holiday tree' instead of 'Christmas tree,'" the young Trump said in an interview this week. "I could go on and on for hours. Those are the very things that made my father run, and those are the very things he cares about."

To be fair, Trump Jr. pointed out other outrages galvanizing his father’s run.

“He opens the paper and some new school district has just eliminated the ability for its students to say the Pledge of Allegiance, or some fire department in some town is ordered by the mayor to no longer fly the American flag on the back of a fire truck," Eric Trump told the Stream's James Robinson on Friday.

There are just a few things wrong with this statement. First of all, Donald Trump doesn’t open a paper. He opens his Twitter feed, Fox News or maybe Breitbart. Sometimes he glances at the National Enquirer, especially if “people are saying” there’s a good conspiracy theory about Ted Cruz’s father or Hillary Clinton’s health on the cover. Second, a newspaper that covers things like that would go out of business fast due to snoozing readers.

Looks like the whole family needs to broaden their media diet.

2. Maine’s governor seems genuinely perplexed about what racism is.

Trump-loving Maine Gov. Paul LePage can never convince anyone that he is not racist. The track record is just there, like Trump’s. It spans decades.

But it’s kind of funny to watch. LePage is like an even more ill-tempered Elmer Fudd. The more he sputters and tries, the more he shoots himself in the foot or face.

At a press conference Friday, LePage, who has lamented the fact that drug dealers come from New York and impregnate white girls in Maine, sought to prove just how not racist he is.

“A bad guy is a bad guy. I don’t care what color he is. When you go to war, if you know the enemy, the enemy dresses in red and you dress in blue, you shoot at red,” he said. “You shoot the enemy. You try to identify the enemy. And the enemy right now, the overwhelming majority of people coming in are people of color or people of Hispanic origin.”

See, not racist at all! What’s so racist about seeing people of color as the enemy?

LePage already had a busy week. The day before, he had taken his anger management issues out for a spin when he left a profanity-laced voicemail for Democratic State Rep. Drew Gattine: “I want to talk to you. I want you to prove that I’m a racist. I’ve spent my life helping black people and you little son-of-a-bitch, socialist c**ksucker.” He went on to lament that they cannot settle their differences with an armed duel.

On Wednesday, LePage called Khizr Khan, the Gold Star father who had criticized Trump at the DNC, a “con artist.” During the same speech he also said nearly all of Maine’s drug dealers are black or Hispanic.

Just another week of not being racist (or homophobic or Islamophobic) for LePage.

A centerpiece of the Trump campaign has been, “I know you are but what am I?”

This is also known as, “I am rubber, you are glue, anything you say bounces off me and sticks to you.”

When commentators and even some doctors began to question Trump’s mental fitness to be president, suggesting in increasing numbers that he might be crazy or demented, he ramped up the conspiracy theories about Hillary Clinton’s health. And since he’s been making such a sincere effort to win over black voters, which is difficult with his long history of easily documented racism, he ingeniously decided to turn the tables and call Hillary Clinton a “bigot.”

This came on the heels of Trump’s recent highly sophisticated appeal to black voters that they should vote for him because, “what have you got to lose?” Never mind the fact that he has hired white supremacists like Steve Bannon to work on his campaign and welcomed the support of other racist members of the so-called “alt-right.” Ever enterprising, on Saturday, Trump sought to capitalize on the tragic shooting death of basketball player Dwyane Wade’s cousin. Now “African-Americans will vote Trump,” he sensitively tweeted.

For this remarkable piece of craven exploitation of a real tragedy, he was promptly and roundly destroyed on the internet.

4. Ann Coulter is having a really hard week, guys, so she’s going to need to mock disabled people.

Visiting her pal and fellow Trumpian Sean Hannity this week, Ann Coulter just had to blow off some steam. To hear the Donald “softening” his stance toward undocumented immigrants, and suggest he might not deport 11 million people at once was just really hard for her. Poor thing.

She told Hannity she was against any kind of pivoting for Trump, no matter how disingenuous. “I think it's stupid because all Trump is doing is demoralizing his base,” Coulter said. “The people who hate him still hate him, but now they can call him a flip-flopper. Way to go, whoever told Trump to say that.”

Trump’s walking back of his hardline immigration stance comes at an inconvenient time for Coulter, who has just released an entire book fawning all over him. Among the marvelous things Coulter argues in this tome is that Trump was not really mocking the physical disabilities of New York Times reporter Serge Kovaleski that time when Trump was clearly mocking Kovaleski. Coulter instead argues that Trump was just “doing standard retard.”

Like Ann Coulter, Sarah Palin loves her some Trump, even if his campaign has done its darndest to keep her at arm’s length after she made some truly incoherent speeches on his behalf. But like Coulter, Palin is a little worried that Trump might be going soft on all those rapists Mexico is sending here.

On Thursday, Palin decided to phone it in to Fox’s Eric Bolling, who was sitting in for Bill O’Reilly. Her main point: Donald is still going to build that wall. “Donald Trump understands that enforcing the laws and building that wall are paramount to what the will of the people is, and thank God, he’s still preachin’ that!” she reassured the worried Fox audience.

Apart from the wall, Palin also had some carefully considered, reality-based plans to discourage people who are here illegally. “Well, we have to quit incentivizing those who are here illegally, keeping them here, by not employing them, not giving them free health care, free college, free phones, free Happy Meals, free anything!” she said.

Perhaps Katrina Pierson summed up the whole Trump campaign words-to-reality-relationship best this week when she explained that contrary to appearances, Donald Trump was still the same old bigot he always was. “He hasn’t changed his position (on immigration),” she said. “He has changed the words he is saying.”

Well, that certainly clears everything up!