Cashing in on Cuba: Why the U.S. tourism industry isn't waiting for Congress to lift the embargo

Cuba Libre? It took capitalist motives to beat the embargo and make travel to the communist country a reality 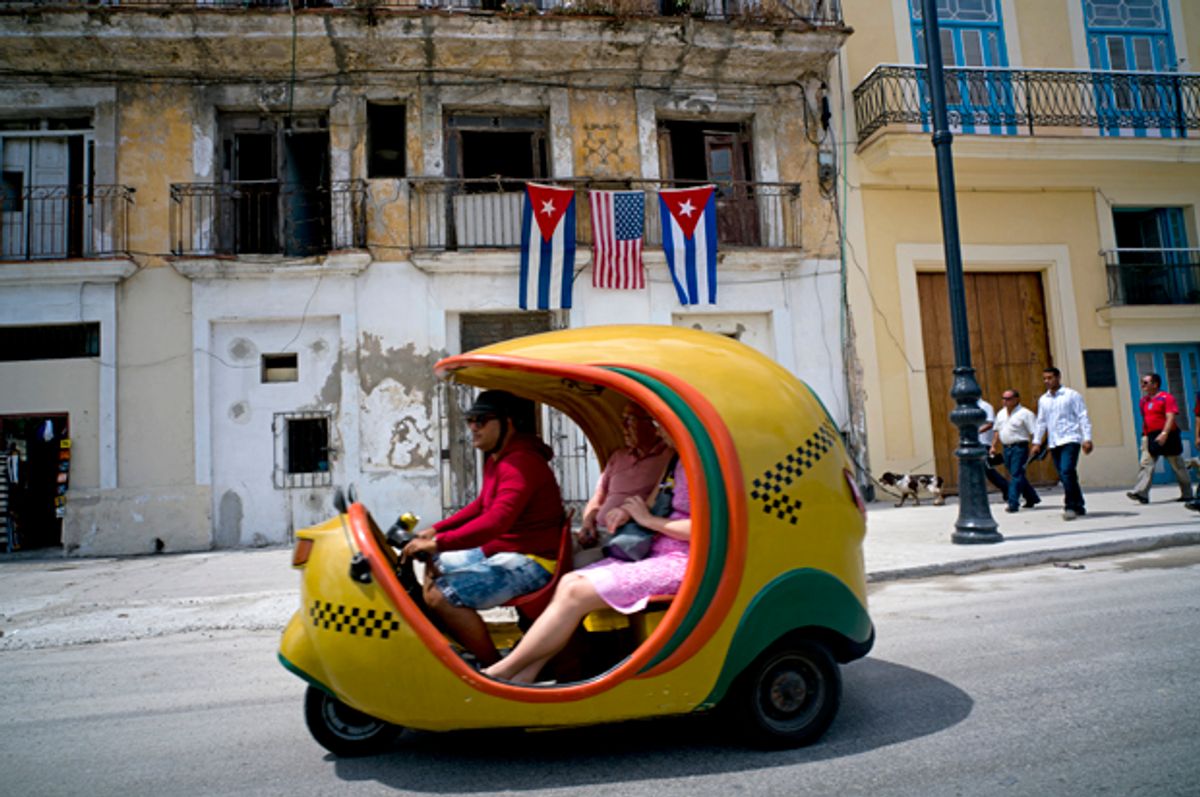 When Juan Santamarina's two uncles from Cuba recently visited the U.S. for the first time, the travel experience was exceptionally . . . unexceptional.

“It was a pretty simple process to get their five-year visas, as if they were flying to anywhere else, which is remarkable,” Santamarina, chair of the history department at the University of Dayton, told Salon. “After so many years, we’re finally beginning to see the U.S. having more normal relations with Cuba — more like the relations with other countries.”

It was just 20 years ago that President Bill Clinton signed a law strengthening the embargo imposed in 1960. But since President Barack Obama lifted restriction on family travel and money transfers from the U.S. to Cuba in 2009, the process of normalizing diplomatic and trade relations between the two countries has picked up the pace. In the past seven years, two-way travel restrictions have been lifted, diplomatic ties have been restored, prisoners have been swapped  and more U.S. business delegations have been exploring the streets of Havana. And U.S. companies eager to do business in and with this long off-limits market have been leading calls to end the 56-year-old trade embargo.

Now after the Obama administration used its executive powers to lift some trade restrictions in September and renewed calls to lift the embargo, companies in the tourism sector have decided the time to try to gain a foothold in Cuba is now. They're working around the embargo, which Congress has failed to rescind. Among other things, the legislation, a lingering vestige of the Cold War, requires Americans traveling to Cuba sign an affidavit promising that they aren’t going to the island nation on vacation — Cuba is the only destination in the world for which this is required. But that isn't stopping the airlines.

On Wednesday, JetBlue will become the first U.S. carrier since the 1950s to offer commercial routes to Cuba. The inaugural flight will depart Fort Lauderdale, Florida, filled with Cuban-born Americans heading to the central Cuban city of Santa Clara. Other airlines will soon follow and by the end of the year regular direct routes are likely from Miami, Chicago, Minneapolis and Philadelphia to and from nine Cuban cities.

Although there are still only 12 approved reasons for U.S. citizens to travel to Cuba, they can now be defined broadly enough to accommodate almost any type of tourism, according Samuel Engel, vice president for the Aviation group of ICF International, a global advisory firm. “You’d have to be pretty uncreative not to find a way to put yourself into one of the 12 categories in order to fly to Cuba from the U.S.,” Engel told Salon. What, for example, constitutes “educational activities,” or “support for the Cuban people,” two of the authorized reasons to visit Cuba?

In other words, the gaps in the embargo's fine print are big enough to sail a cruise ship through. Indeed, earlier this year, Carnival became the first U.S. leisure travel company since the 1950s to offer cruise packages to Cuba by carefully categorizing the tour as a cultural exchange program.

“The Obama administration’s steps to broaden and more generously interpret the 12 authorized categories have punched a beneficial, big hole in that barrier,” Fulton Armstrong, a research fellow at the Center for Latin American and Latino Studies at American University in Washington, D.C., told Salon via email. “Commercial flights make that travel more irreversible, and they lock in the interests of powerful political voices — the airline industry and others — in favor of travel.”

Earlier this year, Connecticut-based Starwood Hotels & Resorts signed deals with three state-owned hotels in Cuba after the U.S. Treasury Department gave it the go-ahead. And last week, AT&T became the first U.S. telecom to sign a deal with Cuba’s state-owned phone companies to offer mobile roaming service to customers who travel to Cuba.

The doors the Obama administration has opened will be very difficult to close, and they may even compel the reluctant Republican Congress to lift the embargo. One stumbling block to that may soon be resolved if negotiations to settle claims on properties appropriated by the Cuban government are resolved. Human rights in Cuba still remains a big sticking point, but advocates of normalizing relations can point to America’s engagement with other authoritarian states across the globe, such as Egypt, China or Saudi Arabia, and question why a neighbor just 90 miles south of Miami is held to a different standard.

And so while the GOP-led Congress is unwilling to remove the embargo, a majority of Americans favor ending it, according to a poll earlier this year. It's telling that since 2012 the number of people taking charter flights to Cuba has grown fivefold, to a half million travelers last year, according to Engel: Americans are unlikely to dissuaded from traveling to Cuba, embargo or no. The moves being made by JetBlue, Starwood, Carnival and AT&T are sound business decisions: There's an underserved demand and a new market: So no one should be surprised that capitalism is bringing the de facto end to the embargo of communist Cuba.