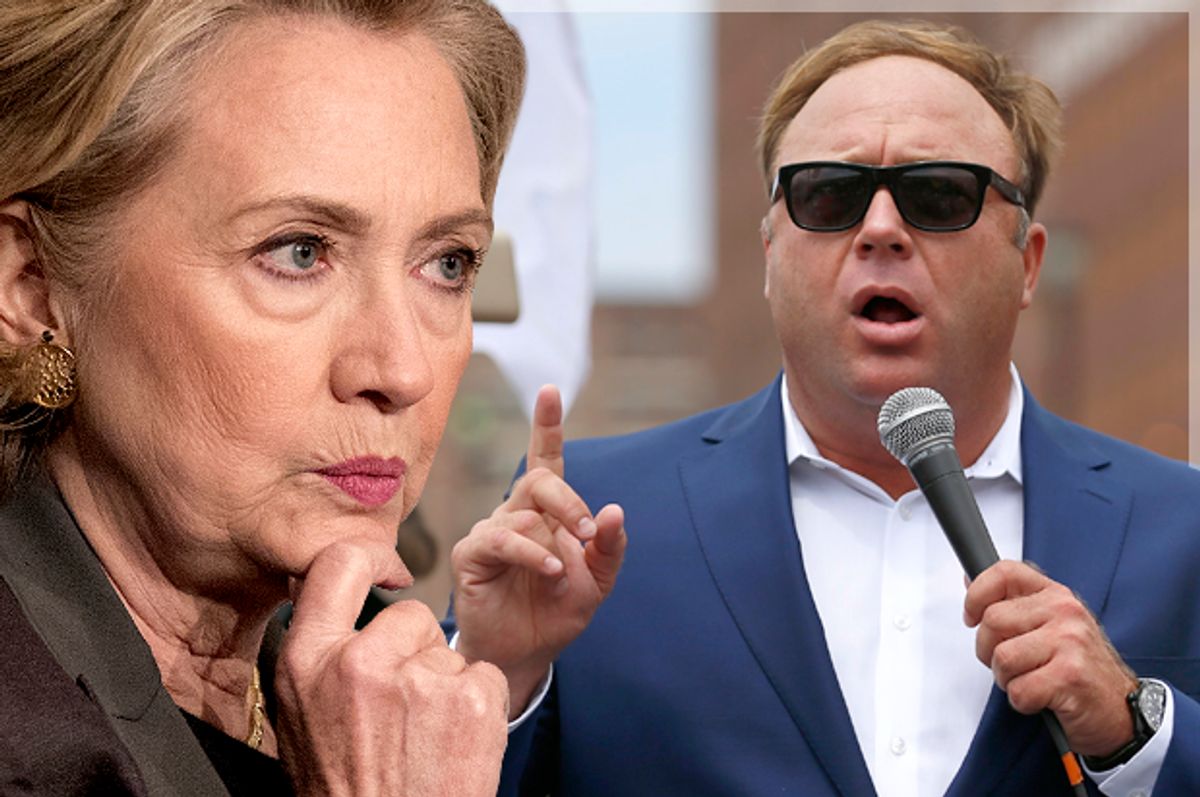 When radio conspiracy theorist and exploiter of paranoiacs, Alex Jones, insisted that President Obama used "tiny helicopters and airplanes" to guide a super-tornado toward a small Oklahoma town in order to distract from yet another alleged "gun grab," I thought we'd reached Peak Jones. I thought we'd finally witnessed the most ludicrous conspiracy theory since the one about shape-shifting lizard people from outer space infiltrating every level of our government.

But somehow Jones managed to top it, while also completely embarrassing himself. Finally.

For several years now, Jones has led the effort to diagnose Hillary Clinton's physical health, theorizing that the Democratic nominee is suffering from a not insignificant brain injury, which, by the way, she's failed to disclose and ought to immediately. Naturally, the real-life springboard for the theory emerged from a December 2012 story about Hillary suffering a concussion when she collapsed from apparent dehydration.

Since then, we've been told by Jones and others that the concussion is merely a cover story or a false flag, masking the fact that Hillary is significantly incapacitated and incapable of enduring the rigors of the presidency. The theories became mainstreamed this summer when photos emerged of Hillary being helped up a set of porch stairs -- stairs, we learned, that were icy and therefore dangerous. Because it was February, and not June; a detail the alt-right news outlets, including Fox News, conveniently omitted. Furthermore, Hillary was wearing high heels while being careful to not slip and fall on icy stairs during a presidential campaign. Nevertheless, the photo of Hillary being helped up the stairs was the smoking gun that apparently vindicated the Hillary Health Truthers. The tall tale about the stairs was followed closely by another story in which an awkward Hillary double-take during a press gaggle was diagnosed as a mini-seizure. To any thinking human, it clearly wasn't.

This brings us to Jimmy Kimmel, who welcomed Hillary on his late night show last week and asked the candidate to open a jar of pickles, proving her dexterity. The intention was to cleverly ridicule theorists like Jones, Sean Hannity and, yes, Donald Trump, who continue to insist that Hillary's in an obviously enfeebled condition, even though she's not. Naturally, Hillary was easily able to open the pickle jar, facetiously confirming that her health is robust. To repeat: it was a bit intended to take the piss out of the alt-right, and it worked. Big laughs and, politically, Hillary came off as fun and gregarious.

Alex Jones disagreed. The 42-year-old talk show host, who curiously looks at least 15 years older, perhaps due to a debilitating illness (kidding), dedicated a seemingly interminable segment of his Thursday show to proving that Hillary couldn't have opened the jar without help. Jones growled on-and-on about the proper way to open a "can" of pickles, which would've been a truly amazing feat since it's nearly impossible for anyone, much less Hillary, to tear open a metal can of anything with her bare hands.

Yes, the "Pickle Jar Truth" meta-conspiracy is upon us.

Using actual pickle jars of various brands and sizes, Jones explained that no one twists the lids off vacuum-sealed jars -- everyone knows, Jones said, that we're supposed to remove lids by pushing them down and then popping them off. Odd, considering how every jar of pickles I've ever opened required twisting, just as Hillary did with Kimmel's pickle jar. But, OK, Jones thinks "cans" of pickles are opened by yanking the lid off. Fine, even though the rest of the pickle-jar-opening public disagrees.

All told, Jones' theory explains that the can-slash-jar of pickles was pre-loosened by Kimmel's staff because Hillary obviously couldn't have opened it without help, proving she has one foot in the grave. A pickle jar. Ultimately and obviously, it doesn't matter whether the jar was pre-loosened. If it was, so what? It was a comedy bit, not a peer-reviewed medical experiment. We shouldn't have to explain the joke, but the irony is that Kimmel and Hillary jabbed the conspiracy theorists for dealing in silly tests to prove Hillary's physical weaknesses by asking her to undergo a silly test, the pickle jar, which is ultimately an irrelevant metric of 1) physical health, and 2) presidential qualifications. In reaction to Kimmel's satirizing of these silly tests, Jones was totally suckered into responding by jumping on the pickle jar test to prove that Hillary is incapacitated.

The same day that Jones inaugurated himself as the first Pickle Jar Truther, Donald Trump reacted to Hillary's prepared remarks about Trump and his fanboys in the "alt-right" movement by tweeting the following:

Hillary Clinton only knows how to make a speech when it is a hit on me. No policy, and always very short (stamina). Media gives her a pass!

Josh Barro hilariously observed, "It is such a window on Trump's psyche that Hillary gave a 37-minute speech ruthlessly attacking him, and his main objection is it was too short."

Maybe Trump would've preferred Hillary to summarily define Trump and his loyalists as "racists" for an additional 37 minutes? That's right, Trump inadvertently clamored for a longer speech -- a speech about how he's a race-baiter and a fear-monger -- in order to shoehorn into his reaction these insane health conspiracies via his parenthetical "stamina" remark. In other words, Trump affirmed his allegiance to Jones and Jones' wacky conspiracy theory by interjecting a one-word confirmation, "stamina," into a tweet about Hillary's alt-right speech. Her speech was short because she couldn't handle anything longer than 37 minutes.

Trump, who famously injected himself into the Birther movement, is also attempting to mainstream the entirety of the conspiracy theory fringe and, with it, Alex Jones himself who, like Trump, is nothing more than a wealthy con-man, selling gibberish to deeply impressionable and, perhaps, mentally ill listeners. In doing so, Trump also stupidly called attention to the fact that his own health may or may not be an issue, given that Trump released an extremely suspicious doctor's letter in lieu of releasing his actual medical records. Of course we have no way to prove that Trump is in poor health, any more so than Trump can prove Hillary's alleged poor health. But we do, indeed, have evidence pointing to Trump's obvious paranoia as well as his susceptibility to suggestion -- his willingness to accept unfounded nonsense marketed by a professional matchstick man, Jones, who once said the federal government is turning young boys gay via poison juice boxes.

We have to ask then: what's Trump hiding? For that matter, what's Jones hiding? Full medical records, please, gentlemen.