Pipeline protests: The fight goes on against project that could jeopardize Native lands in the Midwest 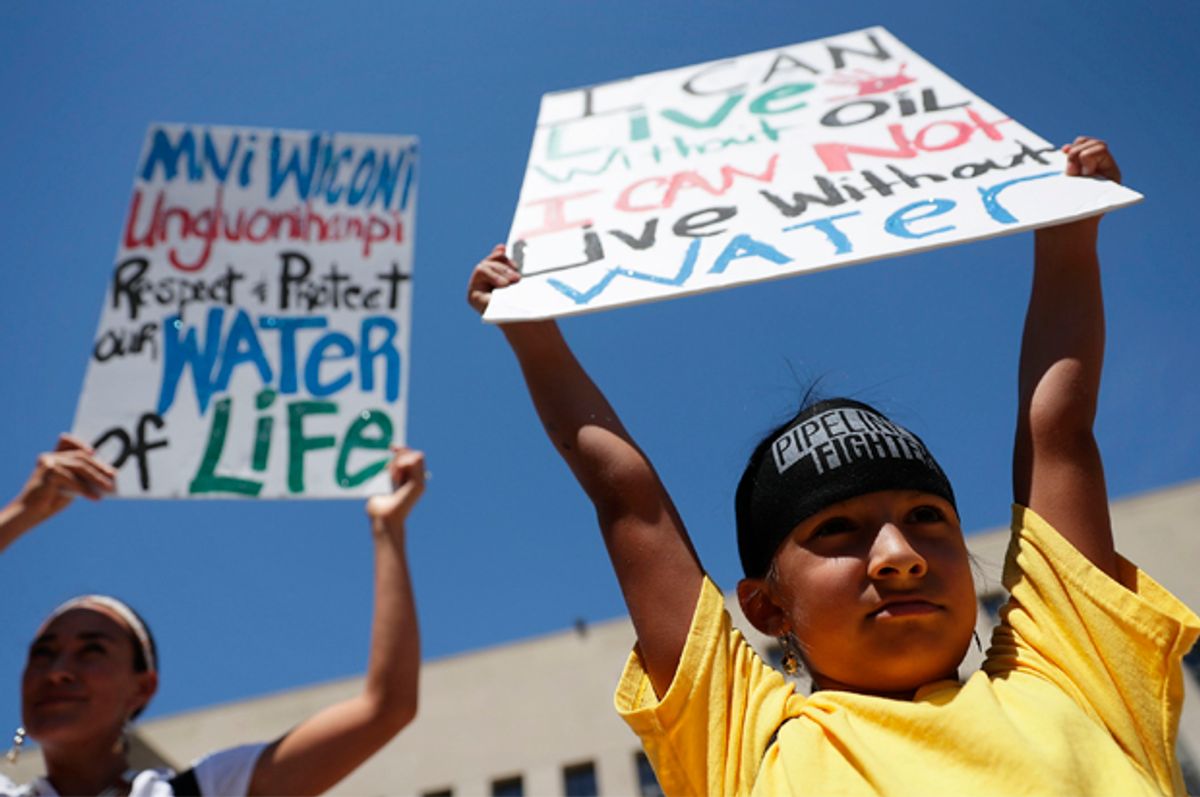 Members of the Oglala Lakota Nation in South Dakota participate in a rally to protect water and land from the Dakota Access Pipeline, August 24, 2016 in Washington, DC. (Getty/Alex Wong)
--

Kayla Lookinghorse-Smith set out from New York to Washington, D.C. late Tuesday night, driving six hours to attend her first protest on the East Coast against the looming Dakota Access Pipeline, a $3.78 billion, 1,100-mile oil project being built by a group of firms led by Texas-based Energy Transfer Partners.

Her two young sons, 19 months and 5 years old, slept in the backseat.

"I didn't know what to expect," she said, as she drove into the early morning hours. "I just knew that I have to support my tribe, because they are taking a stand for water, an essential to life, in this world.”

The pipeline — already facing immense criticism — will cross hundreds of rivers, creeks and tributaries. And, part of it will run directly under the Missouri River, the only source of water for Lookinghorse-Smith’s tribe, the Standing Rock Sioux.  Any leaks could compromise the entire water supply, and tribe members are concerned that sacred sites like burial grounds will be destroyed. DAPL would be the first to transport over 470,000 gallons of fracked, crude Bakken shale per day from North Dakota directly to refineries in the U.S. Gulf Coast, notably Illinois.

Lookinghorse-Smith is a full-blood Hunkpapa Lakota. Her family and thousands of other supportive people from around the world (including members of my tribe, the Shinnecock Nation of New York) have offered support or camped out across from the DAPL construction site near Cannon Ball, North Dakota, since April 1. They are locked in a tense, politicized, very personal yet peaceful struggle against officers of the law and the U.S. Army Corps of Engineers, which has overseen the project.

Many people close to the protest camp, like Lookinghorse-Smith, are upset by media reports of violence against police by Native people.

"This peaceful protesting is happening every day in North Dakota," she said. "Our drum beats are not gunshots, our canupas (peace pipes) are not bombs, and our war cries are not criminal activity — as mainstream news media clearly misleads the public to believe." Lookinghorse-Smith says the only loaded guns brought to the protest are those carried by the heavy police presence surrounding the area.  Instead of weapons, Native protestors are using their voices, and our violent and oppressed collective history as a guide. They are broadcasting radio from a makeshift station at Sacred Stones (Standing Rock Spirit Resistance Radio @ 87.9 FM), and social media is flush with petitions, commentary and live videos from around the world in support of Standing Rock.

Violence and dangerous racist rhetoric is brewing nearby, however, in Bismarck Mandan, North Dakota.

“Tension is high, and the people of Standing Rock are starting to feel uncomfortable going into Bismarck to get supplies … because there are a tremendous number of threats and KKK mentality. People are talking about killing Indians now,” Lookinghorse-Smith said.

Actress Shailene Woodley (who also traveled to the Washington protest on Wednesday) joined the camp at Standing Rock two-and-a-half weeks ago, and has been sitting on the front lines. "If I thought my life was at risk,” she mused in a recent on-site interview, “do you think I would be sitting here like this?" Woodley paused. “The only thing that is happening are messages of love and peace … and unity. I love how mainstream media can spin a story however they want."

Outside U.S. District Court in Washington on Wednesday, things were also calm. Several hundred supporters gathered, including Susan Sarandon and Standing Rock Tribal Chairman David Archimbault II.  Inside, Judge James Boasberg considered the case of the Standing Rock Sioux, who have filed to halt pipeline production and are asking the US to honor long-ago enacted treaties protecting Native lands and water.

And, for Native people, there is a spiritual element to water that goes far beyond the fear of pollution. Besides being a physical necessity for life, in traditional Native American circles water is the "first medicine" in a complex and environmentally respectful belief system that refers to the earth as the mother of all things.

Randy Ross of the Ponca/Oto tribe in South Dakota, which the pipeline will also cross, recalls a prophecy revealed by his late Cheyenne River Sioux tribal Elder Sidney Keith.

"There are many elements of healing brought by Creator, but water is essential to life, it is sacred,” he explained.  “Oil, as we discovered after the Gulf Coast BP Oil spill, destroyed so much, and Mother Earth will shake herself to cleanse. Many believe that time is upon us.  We see fires, floods, tornados of unheard of frequency and power, earthquakes in greater frequency and power.”

As protesters wait for the judge’s promised ruling Sept. 9, Lookinghorse-Smith worries for her relatives and the others standing firm in the way of development. "It's starting to get cold in North Dakota right now, and cold weather gear and other essentials are much needed. The camp will sustain as long as they can.”

Watch video, courtesy of SikkestNativez, of the protest below: