Rihanna's VMA triumph has nothing to do with her love life 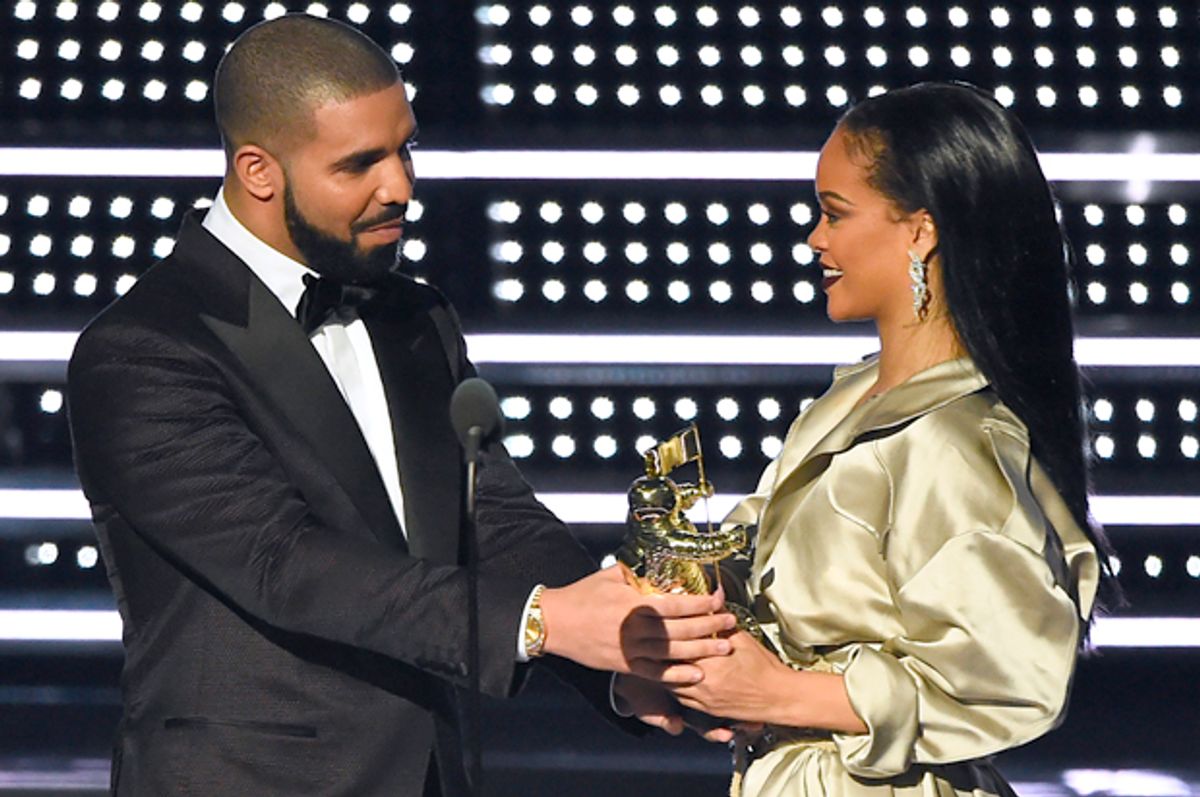 A dumb meme circulated almost immediately after Rihanna was honored with the Michael Jackson Video Vanguard Award at MTV’s Video Music Awards last night. Rather than focusing on Rihanna’s one-two-three-four (!!!) career-spanning performances, this meme encourages women to “Get over your Chris Brown and wait for your Drake,” because of course Rihanna’s mission since leaving an abusive relationship has been to attract a “good guy.” This whole career thing has just been one big hobby until the right man came along, and last night she was romantically rewarded. Thank god she can stop pretending to care about dominating the music industry live happily ever after now!

It’s easy to get caught up in the potential fairytale of it all, and the show’s saccharine-soaked build-up was designed to encourage it. From Drake’s billboard congratulating Rihanna in L.A. to him missing accepting his own award and yet arriving in the nick of time (looking dapper in a tux, no less) to present the award to his speech. Ah, that speech.

“She’s someone I’ve been in love with since I was 22 years old,” Drake confessed to the crowd and viewing audiences with the earnestness of a designed-to-go-viral prom-posal. Sigh. Then it was time to deliver the award — and he went in for the kiss.

If the VMAs were a scene in a Hollywood romantic comedy, Rihanna’s and Drake’s lips would have met as fans cheered -- not for winning a major industry award, but for winning the audience-approved suitor. Thankfully Rihanna is a badass who wanted none of that, at least publicly. She dodged the kiss, leaving Drake’s face nestled awkwardly near the crook of her neck, gracefully brushing off his move before accepting the award with aplomb.

Rihanna’s speech celebrated the honor as a win for Barbados and for her fans, too. “This is the first Vanguard to land anywhere close to my country. My success started as my dream, but now my success is not my own,” she said. “It’s my family’s. It’s my fan’s. It’s my country’s. It’s the Caribbean as a whole. It’s women. It’s black women.” While the world is still high on the rush of national pride from the Olympics, we find ourselves thinking about what defines a victory. For some it’s earning the gold, for others it’s being recognized as a leader. Unfortunately for women, the old “you’re nobody until somebody loves you” adage is still attached to our successes.

I’m all for romance, grand gestures, and the expression of affection that lets a person know how highly they’re valued — I actually think our society would do well to have more of that in everyday life. But redirecting public attention to a romantic context, like Chinese diver Qin Ki receving a marriage proposal during her Olympic medal ceremony, makes about as much sense as being offered a work promotion at your wedding. To be certain, both can be amazing and can reflect a certain celebration of accomplishment. But women’s successes should not be underscored or buttressed by the status of their relationships.

Whether Drake and Rihanna are together for real or not, her big moment would’ve been remembered for his kiss, and not the prestige of the Video Vanguard Award, if she hadn’t dodged it. The narrative, too, would have been different — the moment would not have been read as Rihanna proudly accepting an industry award, but rather her romantic redemption. The takeaway would be that she finally allowed herself to be adored by the nice guy who’s been her cheerleader for years while she was mixed up with bad boys. The hero of the story would have been Drake for swooping in to reward Rihanna’s perseverance, like a prince offering true love’s kiss to snap the waiting princess out of her bad circumstances. Rihanna shut that notion down by highlighting there’s more to her than finding love in a hopeless place and work, work, work, working her way to the top. She was the only girl in the world on that stage last night, and if there’s a man by her side to celebrate in the acclaim — well, that’s icing on the cake. And it’s not even her birthday.