The Anthony Weiner scandal trainwreck: Why we can't stop gawking at his baffling lack of judgment

Busted again for sexting, Weiner may finally lose his marriage and career — but not our attention 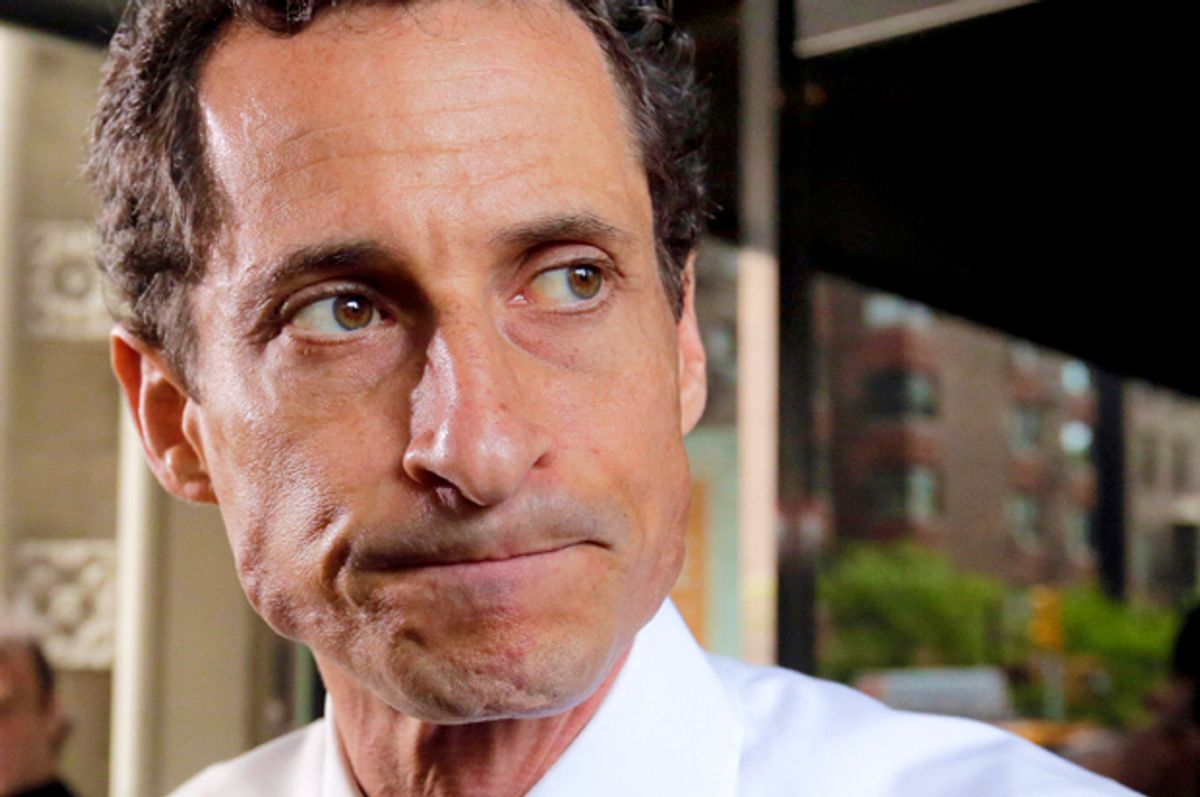 Former Congressman Anthony Weiner begins the documentary "Weiner," released earlier this year, after mumbling about the fact that he’s even participating in such a film, by directly addressing the camera and calmly stating, “I guess the punch line is true about me. I did the things, but I did a lot of other things.” That may be true, but Weiner has now guaranteed that his prophetic name will be forever synonymous with his sexting scandals, given his most recent round of images, sent to a “busty brunette” and exposed in today’s New York Post.

As Jamieson Webster argued convincingly in The Guardian, “Anthony Weiner wanted to be caught, and caught and caught. It isn’t enough that he sent out the pictures himself in 2011. The latest rendition is revealing on a whole number of levels if we look closely.” After all, this isn’t the first or the second or the third time this has happened — or that he’s been caught. Who knows how many incidents of sexting Weiner has engaged in, whether out of lust, boredom, self-sabotage, a power trip or any other number of possibilities?

It seems utterly bizarre that he would continue to do this so often, knowing that he could so easily lose any modicum of political respect that he’s built back up or any semblance of a career. According to CNN, Weiner has been put on “indefinite leave” by TV station NY1, for which he had been a contributor.

And, of course, Weiner was also risking the demise of his marriage, which has now happened. Huma Abedin, a top adviser to Hillary Clinton and vice chair of her current presidential campaign, announced this afternoon that she was separating from her husband. I don’t think it’s a stretch to think that she had decided long ago that one more scandal would be the one that went too far. Whether this was ever explicitly stated, Weiner had to know that, especially in the midst of a heated election year, the last thing Abedin would want was yet another return to what is likely one of the worst things she has ever faced in her personal life.

The New York Times categorized the documentary, in addition to being about Weiner’s repeated political rise and fall, as also being about “a portrait of a marriage in disarray,” describing Abedin as “present in much of the film, ready to stand by her man but clearly worried. Visibly shaken by the latest revelations of sexting, she doesn’t verbalize her anger, but you feel the tension of her crossed arms.” Though it was, of course, Abedin’s decision to not only stay with Weiner but also to join him when he campaigned for mayor of New York, it’s hard to not feel sorry for her now that she’s being cast back into the spotlight, linked to her boss by her job and their shared status as scorned women.

Given all that was at stake — namely, his marriage and intact family unit, his career and reputation — what made Weiner send what The New York Post described in its headline as “baby-sitting — Anthony Weiner-style,” given that his bare torso and the outline of his crotch are visible right next to his son in an early-morning July 2015 image? It’s impossible to know his exact motivation, but one thing is clear: If there were any way to make himself look worse, Weiner has now managed to do so, by involving his child in such a risqué and inappropriate photo and series of messages. As Webster noted, since Weiner’s specialty isn’t dick pics of the naked variety but rather crotch shots where his bulge is quite visible beneath his clothes, these images don’t need to be censored by media outlets the same way ones of his nude genitals would, lending further credence to his desire to be exposed.

I’ve long wondered whether for men like Bill Clinton and Weiner, their penchant for having extracurricular dalliances (whether of the in-the-flesh or technological varieties) while also maintaining very public marriages and professions of love and devotion to one woman, is not tied in some deep way to their longing for power and adoration by the masses. Even if you start out in politics with a desire to create social change and rise up the ranks, along the way you will have to at some point consider yourself not as a person but as a candidate. You will have to make peace with being a public figure and, along with that, being both venerated and reviled. Perhaps that inherent dichotomy of political life, one rife with supporters and detractors, has led a man like Weiner to want to dissociate from that public, polished image and become, for even a few minutes, just a man with a dick that he wants to show off. Or perhaps there's a thirst for attention so great it propels you into the public sphere knows no bounds, whether it's private messages over Twitter or front-page headlines.

I admit that when this story first broke last night, I pretty much rolled my eyes. Again? So what? Doesn’t a scandal lose some momentum when it stops being, well, scandalous? There’s little humor here as far as I can tell; the days of joking about his sexting alias Carlos Danger seem like a faint memory given just how much rope Weiner used to hang himself. Yet as weary as we all are of this type of news, I think we are drawn to Weiner because either he just can’t help himself or he can but chooses not to. Watching someone continue to self-destruct in that way is something we may want to disavow and consider ourselves “above.” But how many of us truly don’t engage in at least a tiny bit of schadenfreude over Weiner?

Though Republican presidential candidate Donald Trump has tried to use this scandal for political gain, relying on tortuous logic to take what’s a sad moment for an already embattled marriage and turn it into an example of “just another example of Hillary Clinton’s bad judgment,” even Weiner’s most ardent haters must at this point also feel like rolling their eyes to some degree. Perhaps this moment was inevitable, due to whatever compelled Weiner to start sexting in the first place. But that doesn’t make it any less sad. Note: I’m not sad for Weiner personally so much as sad for his wife and child. I’m sad that anyone with the potential to do good in the world has instead simply monopolized his extended 15 minutes of fame in order to glorify his penis.

We also can’t forget that any whiff of scandal for him also inevitably involves Abedin, their 4-year-old son, and Abedin’s boss, presidential candidate Hillary Clinton. Though I find it abhorrent that both Abedin and Clinton are being judged for their decisions to stay in their marriages (one Twitter user declared them “terrible female role models sticking with cheating deviant husbands”), that’s also an inevitable part of being a political spouse, something both women have to know well by now. We may wonder why Abedin stayed for so long in the marriage. But ultimately, it’s none of our businesses. That we’ve made it our business perhaps attests to the fact that it’s far easier to cast aspersions on other people’s relationships than to look closely at our own. Any woman could be the next Huma Abedin and find herself wondering whether to stay or go, whether to recommit to the person she loves or assume that the worst decisions will be revisited once again.

It’s challenging to find anything sympathetic about Weiner’s situation. Though I don’t tend to pass judgment on anyone else’s sexual activities as long as all parties are consenting, here we have several non-consenting parties: namely, Weiner’s son and his wife. Were he an utterly private citizen, perhaps his wife would never have known of his digressions. But he’s not, and he more than anyone knows he’s not. He’s dragged Abedin deep into his political life when it seems clear from her statements and actions that she would far rather be behind the scenes; at one point in the "Weiner" documentary, Abedin acknowledges that she’s usually in the back of the room, not speaking directly to a crowd as her husband so often does. She does it anyway because she cares about him; he seemingly didn’t have the same courtesy toward her.

Rather than trying to parse why, exactly, Weiner, after so many public statements about his infidelity, dared to chance sexting yet again, I can only hope that he and Abedin can move on to have as amicable a co-parenting relationship as possible — and that from now on, whomever Weiner decides to flirt with, online or off, is his business and his alone. If indeed part of the thrill was that he might get caught, something he obviously has had a penchant for doing (despite all the similarities between him and Bill Clinton, the former president was far savvier about hiding his extramarital adventures), perhaps now that he will be facing life as a single man, whatever excitement he gained from sexting on the sly will dissipate. As for Abedin, Weiner says in the documentary, “She was very eager to get her life back that I had taken from her.” Now that Abedin has taken such a swift and public step toward getting her life back, I can only hope that she can be known for the best of her skill set, rather than as an addendum to stories about her husband’s dick pics.