The Clinton BS Files: "Lock her up" isn't really about emails — the right's been accusing the Clintons of murder for decades

Since the early 90s, the "Clinton Body Count" list has circulated, accusing the Clintons of being serial killers 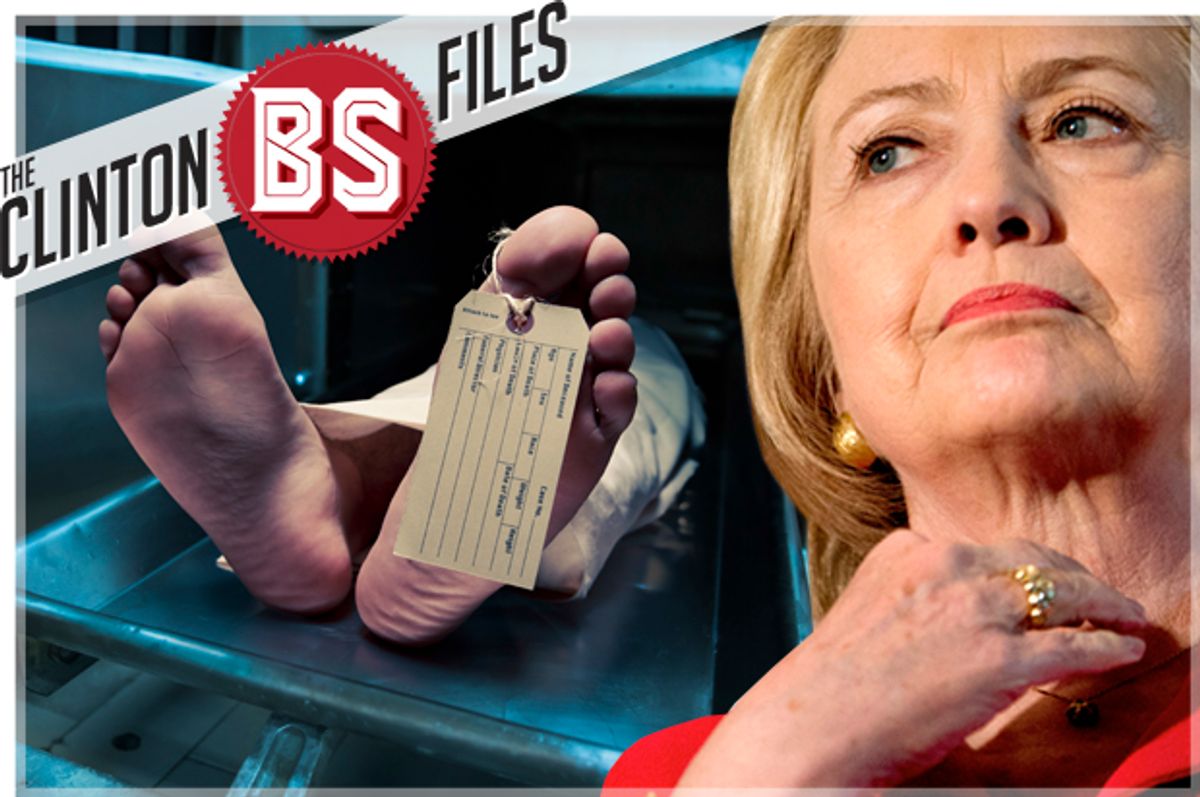 Bill and Hillary Clinton have been plagued by conspiracy theories throughout most of their life in the public eye, perhaps more than any other politicians in history. The Clinton BS Files are a weekly in-depth look at the stories behind some of these conspiracy theories. You can read last week’s here.

During his New Hampshire speech on Thursday, Donald Trump accused Hillary Clinton of running a "major criminal enterprise," as well as "putting innocent lives in danger," and going "to great lengths to hide, delete, destroy and lie about the evidence." The crowd ate it up, chanting what has become Trump's unofficial campaign slogan: "Lock her up! Lock her up!"

The official reason for these accusations is the emails/Benghazi/nefarious meetings with Nobel Prize winning economists. But really, the "alt right" — or fringe right or Birchers or birthers or militiamen or whatever you want to call them — has believed for over two decades that Clintons are evil masterminds running one of the greatest, but most secret, organized crime cartels in history. "Lock her up" fever just shows how those fringe elements are running the show these days.

One of the most important documents, that has been circulated in various forms for over two decades, is a right-wing email forward/pamphlet known as the Clinton Body Count, or as I like to call it, the Protocols of the Elders of Clinton. It's a list of people that the crazies think the Clintons have had murdered. It's simple on its surface, but a deeper look shows exactly how messed up the obsessive Clinton haters are — and what it means to have the Republican candidate appealing to people who believe this crap.

Trump himself has been flogging one of the names on the Clinton Body Count — Vince Foster — but his surrogates are upping the game, trying to get a whole host of false murder accusations into the discourse.

"Go ahead, try it for yourself," they suggest, as if their readers don't already have "clinton body count" stored in their search history.

Even though it's a site for 9/11 and Sandy Hook truthers, Trump loves Infowars, demonstrating his love by going on Jones's radio show and saying, "Your reputation is amazing. I will not let you down."

It only took a whopping two days before this non-story about Google made the leap to Fox News, which breathlessly reported that "Google is being accused of hiding negative stories about Hillary [Clinton] and her campaign by changing its algorithm to bury stories like the 'Clinton body count' story."

To be clear, there is no actual evidence that Google did this, but that almost seems beside the point. The folks at Fox News are scandalized that one might have to go through the effort of typing three instead of two words, all because they fear this extra effort might make it slightly harder for people to find a wild conspiracy theory that the Clintons are serial killers. What next? Being angry that it's hard to find the numbers of Sandy Hook parents that you wish to call and accuse of making up their child's death?

The Clinton Body Count really started taking hold in 1993, when a friend of the Clintons, Vince Foster, committed suicide. At the time of his death, Foster was working as deputy White House counsel and quickly became a favorite target of the right-wing noise machine, especially around an early fake scandal accusing the Clintons of corruption because they fired members of the White House travel team they believed to be incompetent.

(Sounds dumb, because it was, but this sort of pretending to be scandalized over tiddlywinks is also what's driving the email non-scandal of today, so really, it's just par for the Clinton course.)

"At the time of his death, Foster was being treated for depression," Glenn Kessler of The Washington Post wrote in a explainer earlier this year. "In his briefcase was found a note, torn into 27 pieces, which said in part: 'I was not meant for the job or the spotlight of public life in Washington. Here ruining people is considered sport.'"

Naturally, the right took Foster's death as a moment to pause and reflect on the very real human cost to the right wing sport of concocting fake scandals.

Just kidding! They doubled down, and many decided to start suggesting that the Clintons had him killed.

To add some sexiness to it, conspiracy theorists also started floating rumors that Hillary Clinton was having an affair with Foster, rumors that were fueled by the wild-eyed "state trooper" story published by the American Spectator later that year.

There ended up being five — five! — separate investigations into Foster's death, due to the rapid spread of this conspiracy theory. All five concluded that he shot himself.

But reality has never been an impediment to a good conspiracy theory. The Clinton Body Count list took off shortly thereafter, when William Dannemeyer, a former congressional representative, sent a letter demanding a congressional hearing into what he said was 24 suspicious deaths related to the Clintons.

"Since President Clinton had a direct or indirect contact with these people who have died, it raises the very serious question of whether he is involved, directly or indirectly, in their deaths," Dannemeyer wrote.

"In another example," the Los Angeles Times reported in July of 1994, "Falwell ran a promotion in May on his 'Old Time Gospel Hour' for a videotape on which longtime opponents accuse Clinton, in lurid fashion, of having a hand in multiple murders."

The conspiracy theory got another boost in 1996, when Commerce Secretary Ron Brown died after a plane he was in crashed into a mountain in Croatia, killing him and 34 other people on board. Reporter Christopher Ruddy, writing for the Richard Mellon Scaife-funded right-wing rag the Pittsburg Tribune-Review, got to work, publishing a piece in December of 1997 titled "Experts Differ On Ron Brown Head Wound."

Ruddy had previously made a name for himself flogging the conspiracy theories about Foster's suicide in The New York Post, which culminated in a 1997 book titled "The Strange Death of Vince Foster." With his previous success exploiting one tragic death of a White House official, it's no surprise that Ruddy — who is now the CEO of Newsmax —would pounce on the opportunity to do it again.

"A circular hole in the skull of Commerce Secretary Ron Brown could have been a gunshot wound and certainly should have prompted an autopsy," Ruddy began, citing an Air Force lieutenant colonel named Steve Cogswell. And a new conspiracy was off!

The Ron Brown theory required you either to believe that an assassin gave up his own life to shoot Brown, out of fear that he might somehow survive a plane crashing into a mountainside. Or, if you prefer, that the plane accidentally crashed right after an assassin murdered someone in broad view of 34 witnesses, because that's how elite assassins work. You also had to believe, as Clarence Page noted in the Chicago Tribune in 1998, that "the assassin arranged to have a substantial portion of the Air Force's top brass help cover up the dastardly deed."

By the late '90s, it was an all-out Roman feast of paranoid bullshit for Clinton haters, aided by the increasingly accessible internet.

"The list began circulating on the Internet about three months ago," Lonnie Brown of the Lakeland Ledger wrote in November of 1998, noting that the Clinton Body Count list had ballooned to 50 people.

Brown debunked the list, noting that some of the names are wrong, that Clinton's mother's chiropractor is one of the "suspicious" deaths connected to the Clintons, and that some of the people listed are not actually dead.

Near the end of the list: "47. L.J. Davis -- reporter. While investigating the Clinton scandals, he was attacked in his hotel room and his notes were taken. He survived."

What Mikkelson found really happened: "Davis said he had awakened in his hotel room with a big bump on his head. He soon after admitted drinking at least four martinis that night. No pages were missing from his notebook, and he had no idea how he ended up on the floor. 'I certainly wasn't about to conclude that somebody cracked me on the head,' Davis said at the time."

Since then, there have been endless variations of the list, which are all over the internet. The names shuffle around, but the basic premise is the same: If you ever met the Clintons once, or even just met someone who met someone, and then you die at some point later (as we all will do someday), you were probably murdered by the Clintons.

The latest submission into this endless churn of baseless paranoia is the death of Seth Rich, a 27-year-old staffer at the Democratic National Committee. Police believe Rich was murdered on his walk home from a bar by a robber who panicked and fled the scene.

Immediately after Rich's death, Wikileaks founder Julian Assange started playing a game where he insinuates that Rich was a leak and then immediately denies that he was insinuating that, feeding the conspiracy theory that Hillary Clinton had the young man murdered.

While this is all a fun game to Assange and Roger Stone, who has also been feeding the rumors, for the family of Rich, this is a horror show. Mary and Joel Rich, Seth's parents, sent a statement to Newsweek  saying that their son was a Clinton supporter and was going to go on to work for her. There is no evidence whatsoever for Assange's insinuations that Rich was the leak. (Intelligence officials believe Russian hackers are the source.)

The suffering of the Riches is one reason that that Clinton Body Count is a monstrosity that hurts more than the Clintons or the Democrats at large. Proliferating conspiracy theories about people's deaths does very real damage to their survivors.

"These outrageous suggestions have caused our family untold pain because this issue went on for so long and these reports were so painful to read," Sheila Foster Anthony, Vince Foster's sister, wrote in May in the Washington Post after Trump started saying Foster's death was "fishy".

"For years, our family had to wage a court fight to prevent release of photographs of Vince’s dead body," she continued. "My heartbroken mother was plagued by harassing phone calls from a reporter."

But the real tragedy here, as they will let you know on Fox News, is that conspiracy theorists have to type three whole words before they can access sites full of baseless speculation that the Clintons murder people on the regular.