"The Night Of" finale: At least we know the cat didn't do it

On the final episode of HBO's 8-part crime drama, Naz gets a verdict and Chandra's life takes a turn 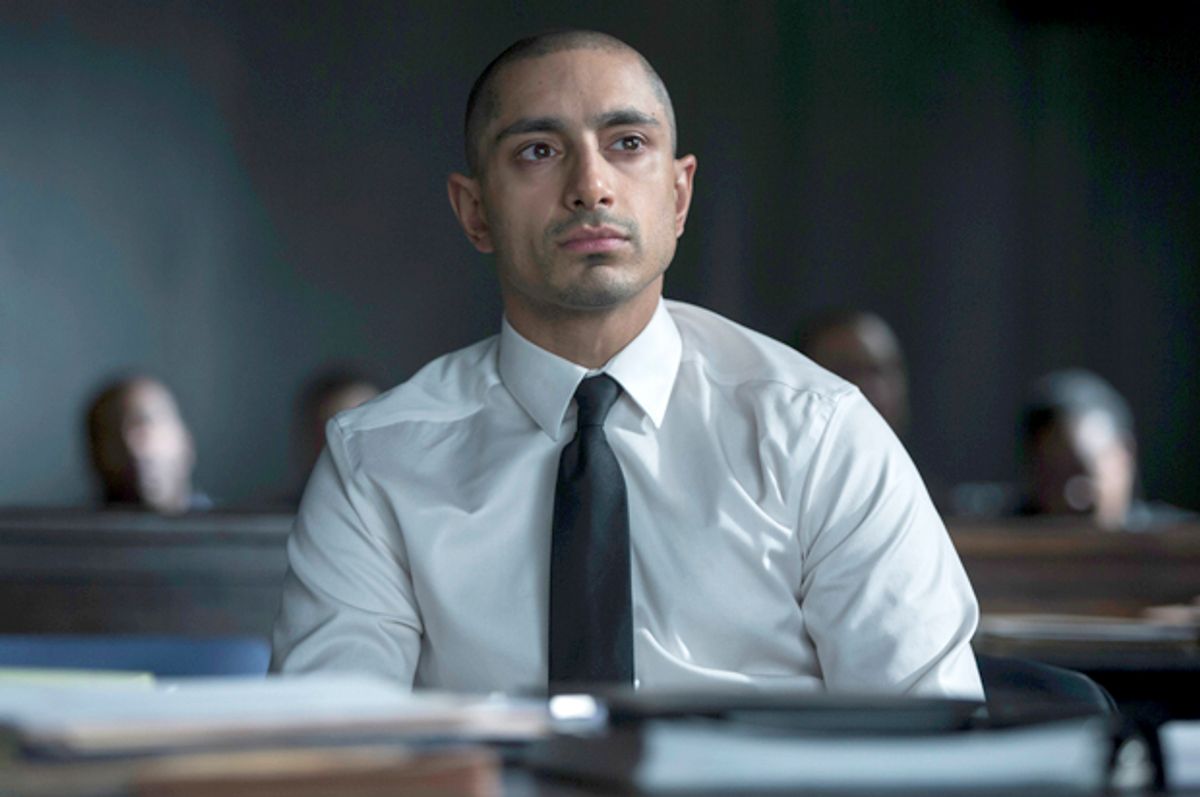 I knew from the official description for The Night Of’s series finale —“Stone finds himself in the spotlight thanks to a controversy enveloping Naz’s defense team”— that I would find this episode beyond maddening. Not just “problematic,” because problematic connotes something that is merely irritating, and not ruinous, like the viewing equivalent of finding a pebble in your shoe — it’ll chafe you, sure, but you can always shake it loose. For most of the series’ brief duration, its treatment of gender has been that pebble in my shoe. Andrea never evolved beyond the sexy, troubled, goth-lite murder victim, and Chandra Kapoor devolved from being a formidably competent, if often overlooked, young attorney to a lust-struck schoolgirl abandoning all common sense for a soft kiss. However, I was still invested in the nuanced potency of the performances and the writers’ uncanny ability to work a wry and unforced humor into the thickest of tragedies. Last night's finale featured everything that has made the show so satisfying to watch at times, and it also uses Chandra’s sudden and staggering incompetence as its narrative lynchpin. Shows like “The Wire” or “Homicide: Life on the Street,” which “The Night Of” clearly aspires to emulate, may not have been exemplars of feminism (and not everything has to be), but they didn’t actively smear their female characters.

We arrive at the episode’s greatest moment (and I’m not being sarcastic here, it’s genuinely great), John Stone’s closing statement — which masterfully sweeps through his very personal, emotional reasons for taking on Naz’s case while rightfully (cathartically, even) excoriating the D.A. and the police for not investigating any of the other very plausible suspects, namely Duane Reade, the undertaker, and Andrea’s stepfather — because video of Chandra’s jailhouse kiss emerged. She is demoted to second chair, before being fired (and presumably disbarred), leaving Stone to do the closing. One could argue that, given her talent in the courtroom — she’s like an oyster knife, deftly shucking the wicked, incriminating parts of these suspects out of them like pearls — the show could be suggesting that her treatment is, ultimately, unfair. After all, Helen Weiss makes a spectacle of Naz’s sex life when she gets to flay him alive on the witness stand.

However, the fact that Weiss gets that chance at all is a testament to the show’s odd, uncomfortable choice to continue its diminishment of Chandra’s decision-making abilities. Stone tells her not to put Naz on the stand, because he will lose his “cloak of innocence;” yet Chandra believes that the jury will see the tender, honey-eyed boy who has held her hand and pressed his mouth against hers. This decision will also lead to one of the most cringe-worthy moments I’ve seen on TV this year (and I subjected myself to “American Horror Story: Hotel”): Chandra copping drugs for Naz and smuggling them into jail through her holiest of holies. Naz is so high when he takes the stand that he can’t even respond to Helen’s final, damning question, “Did you kill her?” with anything other than a half-choked, “I don’t know.” At which point, Chandra proceeds to cry in open court, and, at which point, I proceeded to yell “Oh, come on” loudly enough to wake my sleeping dog (and maybe my upstairs neighbor).

What makes this infuriating is that it’s terribly unnecessary — particularly when almost anything else, even catching a bad flu, would have sidelined Chandra and positioned Stone to prove that he is far better than his subway ads might suggest. Once her purpose of flailing so spectacularly that John Stone, his body blazing with dark red eczema, must stand up, in his white-gloved and sandal-clad glory, and save the day, Chandra is more or less iced out of the finale, a development that is so fundamentally dissatisfying because she’s the only character who is so thoughtlessly disregarded. Everyone else gets a complete arc except the aspiring young career woman; and, in a world where a presidential candidate can say, point-blank, on a national news network, that a woman reporter can’t do her job well because she “had blood coming out of her wherever,” this sort of representation matters.

The finale even gives Box and Weiss, characters who have been frustrating in their singular fixations on Naz’s guilt, ample chances to prove that, even though they have been infected with the spiritual jaundice that can plague their professions, they do, at the end of the day, care about justice. In the very first frame, Box sits at a cop-frequented bar, haunted over a glass of whiskey, as his former colleagues joke darkly about a new type of cop show, one where the cops aren’t inherently heroic, but “just don’t give a shit.” Of course, Box does give a shit, and this will lead him to investigate the case with a vigor that, arguably, he should have shown from the very beginning. His gum-shoeing leads to surveillance footage of Andrea arguing with a dark-haired man in a baseball cap shortly before she gets into Naz’s cab; he gets receipts from the restaurant where the two were dining before they argued, and, from the receipts, gets some names — including Andrea’s financial advisor, Ray, who, coincidentally (and quite conveniently) has a bit of a gambling problem and fingers that are sticky from dipping into Andrea’s honey pot of a trust fund. After stalking Ray on the golf course, Box becomes increasingly convinced that he’s found his man. Bill Camp’s performance here as Box only reinforces my desire that the show had spent more time with him and less time with John Stone’s eczema. He is cagey and coy, yet seething with indignation at this white-collar worm who murdered a young woman, and at himself for not pursuing this sooner.

Box takes his new information to Weiss, who tells him that, “we have more on the kid,” giving expediency more weight on the scales of justice than the actual truth. Jeannie Berlin is marvelous here, and she really sells her character’s slow conversion to the possibility that the easiest case to make might not be the right one. She’s genuinely unnerved when Box gets up and walks out during her closing statement, as she suggests the police truly investigated all of the possible killers; when she makes her point about the purpose of the murder weapon, a knife meant originally to carve up meat, she stops short, looking Naz directly in the eye, as if searching for a naive young kid. When the jury comes back hopelessly deadlocked, she declines to re-file charges. Instead, in one of the few truly feel-good moments in such a grime-dark series, she tells Box, who already looks rumpled and bored in his NYU security guard uniform: “I’ve got a new job for you. Let’s get him.”

Ray the financial advisor may very well be guilty of Andrea’s murder, but Naz has already paid for it. Riz Ahmed has been absolutely mesmerizing, very plausibly conveying Naz’s swift descent into criminality while also holding onto that fundamental spark of earnestness — what Freddie refers to as “the smell of innocence.” In a deep, inchoate way, Freddie has always known what, in his closing statement, John makes plain: “What I see is what happens when you put a kid in Riker’s and say, ‘OK, survive that while we try you for a crime you didn’t commit.’” Naz may walk out of the prison gates and into his father’s embrace, but he’ll never really leave Riker’s. The book that Freddie leaves for him, “The Call of The Wild,” which gives this final episode its title, is a testament to the mentality that Naz will carry with him for the rest of his life. It’s evident in the way he walks out on his mother after she attempts to welcome him home, and in the arctic glare he gives to one of the former friends who testified against him. He is condemned in the eyes of his community, and by a public that has been all-too-eager to conduct a trial by media; in some ways, he’s almost better off at Riker’s, since as Freddie says, “you’ve got people in here who care about you.” Naz ends the series copping on a street corner and nodding out at the same place he took Andrea back in the pilot, lost in a haze of sweet, soporific smoke and the memories of one exciting-turned-terrifying night.

Moments like this have made “The Night Of,” at times, powerful, even transcendent, television; however, now that I’ve seen the series in full, I can’t claim it to be, on the whole, a truly great show. It suffered from an awkward, hiccupping pacing that rushed to introduce other suspects who were simply too superficially good to be true, and didn’t allow for a full range of character development — I still know more about folk remedies for eczema than I do about Detective Box or Helen Weiss, and especially about Chandra Kapoor, and why on earth she’d do things that would end the career she so seemed to cherish. What has been good about “The Night Of’ has been so very good that the bad bits smell even more rotten. Perhaps with a span of more episodes, or an editor willing to excise that eczema subplot, and with an actual woman in the writer’s room, “The Night Of” might could have been broader and smarter all around. For now, I can only mourn the show that might have been.

Laura Bogart is the author of the novel "Don't You Know I Love You" (Dzanc Book, 2020). Her work has appeared in DAME, The Guardian, The Atlantic, and other publications.