Bring back camp! Why "The People v. O.J." and "The Get Down" point to its possible — and much-needed — rebirth

Ours is an era of snarky detachment and bluntness, but 2 shows remind us of the joys of a more indirect humor 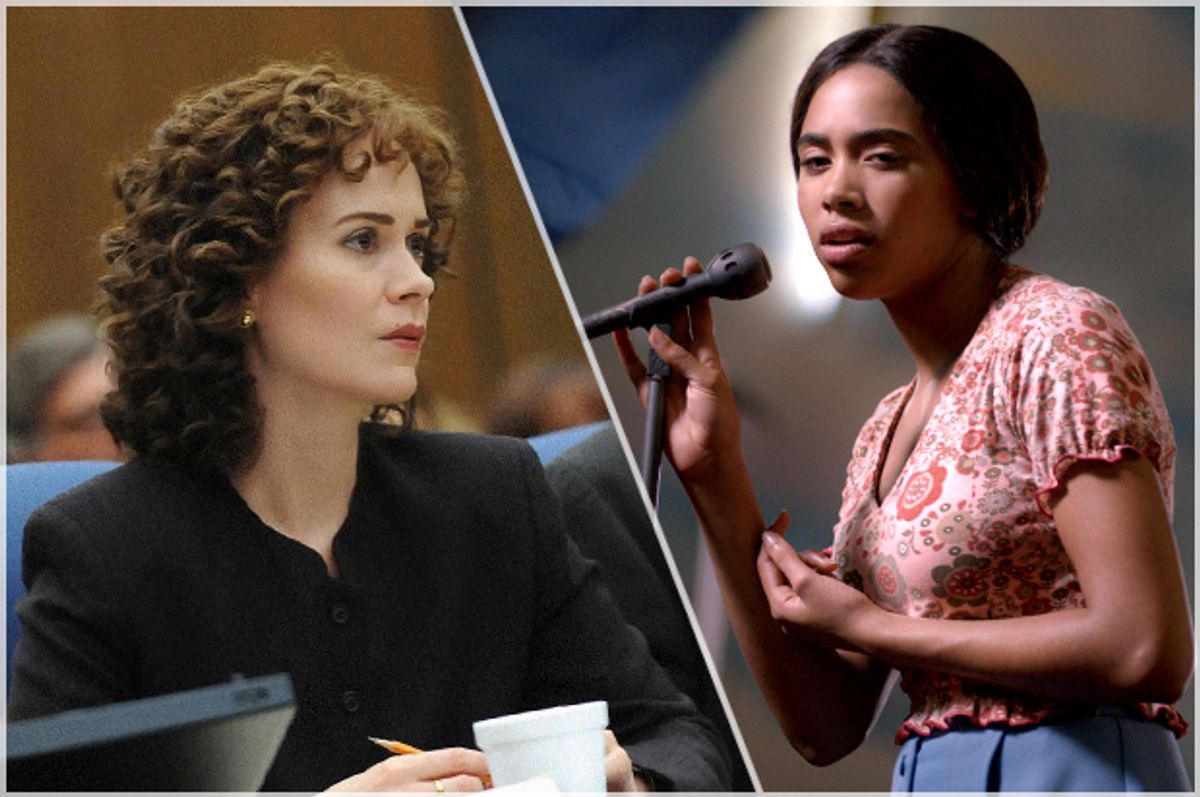 You'd think I wouldn't, since I, like most hip consumers of pop culture, am surrounded by a banquet of irony these days. For more than a decade now almost all the best comedies, from the early days of "The Office" to Amy Schumer's sketches, have had a tone of arch irony. Irony is also the preferred tone of the internet, as best personified by the recently departed Gawker and its anti-smarm stance.

Sarcasm is the lingua franca of the 21st century, which would make one think that camp — the aesthetic that invented giving the ironic side-eye towards smarmy middle-American bullshit — would be everywhere.

But it's not. No, the preferred form that today's irony takes is snark: a stance of ironic detachment, a form of irony that puts the purveyor in a position of overt superiority to his or her object of derision.

Camp, in contrast, is a form of humor that loves to wallow. The snarker sees a collection of Hummel figurines and issues a sharp witticism connecting their cloying aesthetic to, say, the Trump campaign. But the camp aficionado gathers the Hummel figurines to his breast, brings them into his home and artfully arranges them to suggest that the tots with umbrellas are engaged in orgiastic worship of the little boy reading a paper on the potty.

It was at the Republican National Convention (where else?) when it hit me how hard it is to really indulge my campier sense of humor these days.

Only Las Vegas can deliver the levels of sublime bad taste available on the first night of the RNC, when Three Dog Night played at the Rock and Roll Hall of Fame. But my appreciation for the glorious shittiness of it all had no audience. My video of fireworks exploding over Cleveland while "R.O.C.K. in the U.S.A." blared on the speakers got no Instagram likes. My desire to own a pair of flag-festooned women's cowboy boots seemed to confuse my social media followers more than delight them. These people probably wouldn't enjoy a '70s John Waters movie, I thought to myself, as I shifted the tone of my RNC social-media coverage toward the more internet-friendly snark.

It makes sense, of course. Camp is subtle and indirect form of humor, and we live in an era of bluntness. Camp gave marginalized people a way to needle the middlebrow world without direct confrontation — most normies are more confused by camp than offended by it — but direct confrontation is now in vogue. Camp embraces ambiguity; it's refusing to draw a hard line between mocking and genuinely enjoying the Lifetime weepie movie you are watching. But we live in an era where people want clear, delineated lines so they know whether they should take offense at someone's joshing.

But two recent TV shows heavily lean on elements of camp, showing that American culture shouldn’t be so hasty as to leave it behind: Ryan Murphy's "American Crime Story: The People v. O.J. Simpson" on FX and Baz Luhrmann's portrayal of the dawn of hip-hop in "The Get Down" on Netflix.

Both shows deal with complex, real-life historical events involving a number of sensitive issues regarding race, gender, media and economics and thus would seem to forbid approaching the subject matter through a lens of pure nostalgia, as is found in a show like "Stranger Things."

A gritty, overly serious tone for "The Get Down" or "The People vs. O.J." would not serve the material well, either. It would elide the undeniable weirdness of the Simpson trial and the circus around it. It would also tragically conceal the genuine joyfulness and freedom of the early days of hip-hop, removing the fun and humanity from the story in the name of "realism."

But camp, an aesthetic that lives in the liminal area between mocking a thing and loving a thing, gives Murphy and Luhrmann space to play around with these stories, creating more textured narratives than you'd get with a more straightforward approach.

Take the last scene in the second episode of "The Get Down," where aspiring diva Mylene (Herizen Guardiola) rebels against her fundamentalist Christian preacher father (Giancarlo Esposito) by ripping off her choir robes in church to reveal a sexy dress and singing a disco-fied version of a Pentecostal hymn while the congregation flails around in religious ecstasy.

Needless to say, if that scene had been played straight, it would have been at best cringeworthy in the earnestness of the feminist message or more likely completely incoherent. But when properly viewed as an exemplar of camp, which is mostly indifferent to plebeian concerns about coherence, the scene is wondrous. The ecstasy of the worshippers is both mocked and envied. The over-the-top dress underlines the power of female sexuality while also sending up the objectification of women in pop music. Viewers are laughing at the ridiculousness of this scene, but in their laughter they are also rooting for Mylene. Some things do not fit neatly into boxes, and unlike snark, camp doesn't ask them to.

"The People vs. O.J. Simpson" pulled off a similar trick in its "Marcia Marcia Marcia" episode, which dealt in large part with the bizarre nationwide controversy over prosecutor Marcia Clark getting a bad haircut. The whole incident, which happened in real life, is portrayed under a thick layer of campy humor. The heightened promises of the hairdresser, Clark's giddily naive hopes that this is going to be fabulous, the hostile reactions of the men around her: It's all played up for humor, but it's also deeply sad.

Without that humor, the extent of Clark's suffering over a haircut would be too absurd, and many viewers would reject believing that this even happened. (It did.) But camp creates space to mock the situation while still siding with Clark and her horrible haircut. We've all been there, girl, though most of us were lucky enough not to be on national television on our worst hair day.

That these examples both center around stories of women trying to find their way in a man's world is not a coincidence; that theme has always been the bread and butter of camp. The sublime ridiculousness of the straight world is easiest to see when mocking the impossible situations that women are put in by it.

There are other campy scenes in the O.J. Simpson film but I won't spoil them for you.

Perhaps these examples represent the last gasps of camp as it goes gently into that good night, overwhelmed by American culture's increasing intolerance for ambiguity, especially when it comes to humor. Or maybe these shows are seedlings, evidence of a rebirth of humor and art that lives the gray areas, that sees the beauty in bad taste and resists a plain meaning that can be crammed into 140 characters.

I certainly hope it's the latter, because I have a 50-piece Hummel figurine collection sitting in storage, just waiting to be put on display with my lunchbox collection and set of Brady Bunch memorabilia.