Colin The Lionheart: Kaepernick is pushing the envelope for black male athletes

By silently protesting, Kaepernick is treading the waters of Muhammed Ali, Paul Robeson 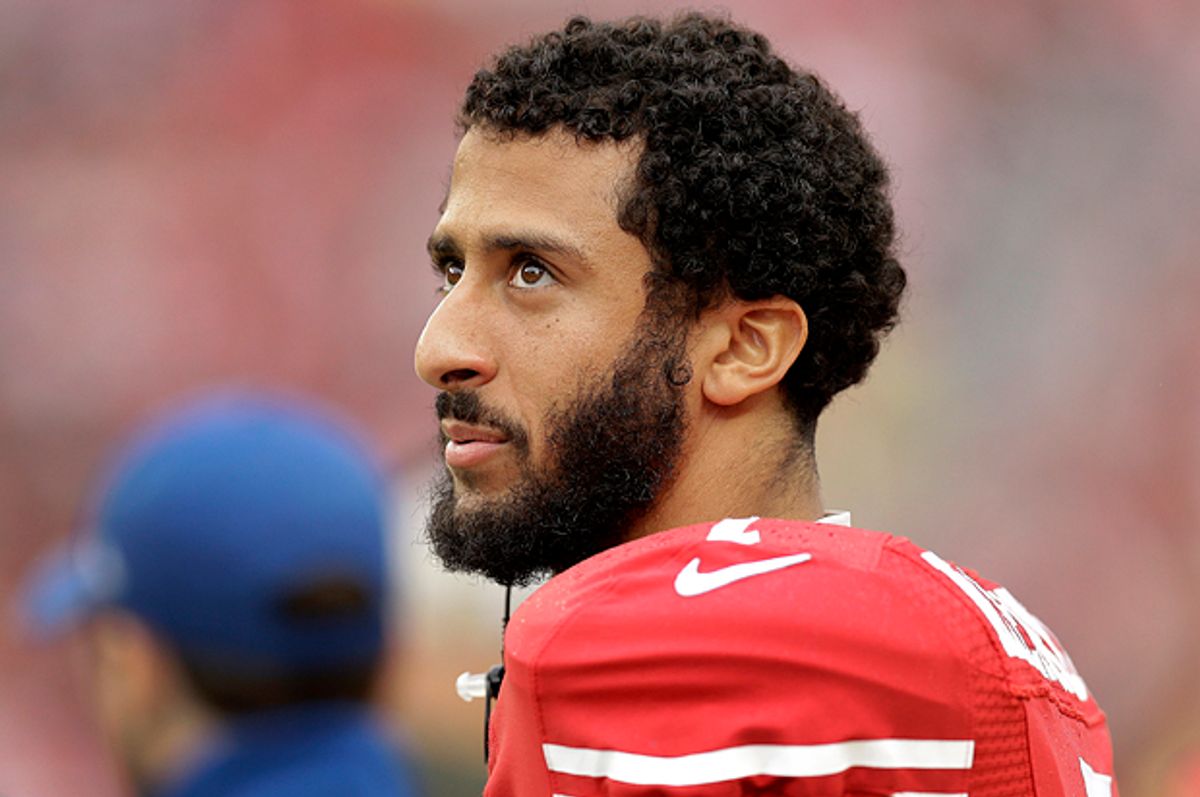 In November 2014, I along with the rest of Black America learned that a 12-year-old black boy in Ohio had been gunned down while playing in the park with a BB gun within less than 2 seconds of police arriving. Ohio was and is an open carry state.

As with any tragic death that lies on the on the same path of others in America, Tamir Rice’s made our world stand still. I still remember attempting earnestly to council my nephew about what he could possibly do in the face of a police encounter.

In December 2015, post-Ferguson, post-Baltimore I along with the rest of Black America learned that the officers who approached Rice in their police cruiser and opened fire were not going to be indicted, and that the state prosecutor fought fervently for that conclusion.

Confused and overcome with a certain clarity of mind, I expressed my concerns on Twitter. I thought about who could possibly shed light on such an injustice. There were many organizations, agencies and names that floated in my head. There had to be somebody who was influential enough to call a crime against humanity out for what it was.

Without a doubt, Ohio native LeBron James was the first person to come to mind. He had the platform, the influence and the history of being vocal, to do something. I started the campaign #NoJusticeNoLeBron to urge him to discontinue play for whatever amount of time he saw useful, as a method of showing the severity of the what is destroying lives across the U.S.

The backlash I received was uncanny. I was accused of starting a race war, of myself not having any skin in the game of change agency, and outright laziness. When asked about the Tamir Rice verdict and the calls for a sit-out, James said: “I don’t have enough information on the subject.”

I lost respect for James answering in that fashion but I still admire his philanthropy, greatness as an athlete and service as a role model. The death Muhammad Ali came months after. We collectively sighed in anguish because a man who stood for more than what his body was capable of was no longer with us. The world would never be the same. What his passing confirmed to me is that the occasion I called for required a different breed of athlete to rise to. I just didn’t expect it would be an NFL star.

Colin Kaepernick, a mixed race, foster-child of white parents who's the quarterback for the San Francisco 49ers, has decided to not stand any more for the national anthem unless America addresses its addiction to oppressing people of color.

For the last few preseason games, Kaepernick has quietly sat during the song written by slavery advocate Francis Scott Key. Here is his third verse reference championing the industry.

Last Friday, the mainstream media finally caught wind of his silent protest. Since then, Kaepernick has teetered on the side of being a hero for the voiceless masses who’ve rarely drank from the wells of justice, and the razor-sharp teeth of Americans who’ve called his stance near treason.

Kaepernick, 28, explained to the media that he has taken more time to watch and learn about the current state of America, saying with conviction, “I am not going to stand up to show pride in a flag for a country that oppresses black people and people of color.”

He decided that protest an anthem authored by a slavery protagonist that lays a fragile promise of freedom and equality was his best option. America is proving him right. Kaepernick has been called the N-word more times than ever before. Fans once dazzled by his fearless play and handsome smile are hanging his jerseys from trees setting them ablaze on video, with the anthem playing in the background. Twitter users are urging Kaepernick and his supporters to go back to Africa if they feel their country is too oppressive. The punishment he is poised to undergo doesn’t come as a surprise. A few months earlier this year WNBA players stood unmoved when they were fined for wearing T-shirts that supported the Black Lives Matter movement and the police who were killed in Dallas. In a response to their aesthetic protest police usually on guard at Minnesota Lynx games vowed to not protect the team. Their fine was later rescinded by the league president. Still members of the team took their protest further deciding not to answer any post-game questions that weren’t about the pressing issues in society. Clearly, athletes have also realized that the suffering is far too acute.

Kaepernick’s protest means more than the fence-riding rhetoric of other athletes. And it is not meant to pit them against each other. But, they should notice that he took a side. He wasn’t shamed into respectability politics that forces black athletes to mention intra-communal crime in the same breath as state-sanctioned violence, every time. Kaepernick is calling into account a system of inequality that fills prisons with black and brown people; floods narcotics into the neighborhoods of black and brown people; kills whites at the hands of police six times less than black and brown people; and intentionally floods the water systems used by black and brown people with lead.

He is addressing the most poignant manifestation of white supremacy, it’s rogue police forces. This stance took the type of bravery Scott-Key fantasized about when he wrote his ballad of love for what was then a chattel slaving nation. The moment we’ve arrived at is necessary. It was brewing. Recently in an interview for Vox.com acclaimed olympian John Carlos remarked, “And so I'm really frustrated with a lot of today's stars, who have an opportunity to speak up but don't. They think they're secure in their little bubbles of fame and wealth. They think racism and prejudice can't touch them because they've achieved a certain level of success.”

An argument consistently made for athletes who join struggles is their risk of losing money. Which begs the question, how much is silence about oppression worth? Are endorsements the duct tape over the mouths of those with the largest platform? Money will be lost. He’s aware of that. But unlike many others in his position, he’s going outside the realms of respectable dissent. Money can’t bring the justice that he believes people of color need here. The fact that he’s now in this position proves it. Black NBA players became the wealthiest group of black people in America this year and this also happens to be the same year that Philando Castile was killed by a police officer in Minnesota with his girlfriend and her 4-year-old daughter in the car. His killer didn’t ask what his socioeconomic status was. The class argument is a mute one.

Kaepernick has made many difficult decisions in his life. His latest goes far beyond which receiver to go to on third down. He’s chosen to tread the waters of Ali, Paul Robeson, and many others.

We all know that football is nothing less than America’s game. Right now America is hemorrhaging, as it always has. We need people like Kaepernick to do just what he did, raise awareness. His story is far from over. Kaepernick is used to making plays. He’s done it all his life. But in a place where blind patriotism silently condones indifference to suffering, there are those who make the plays for justice. This is where he stands, possibly all alone, for something.