Inside "Atlanta" with Donald Glover: "The thesis behind the show was to make people feel black"

Salon talks to the creator and stars of FX's "Atlanta," one of the best new shows coming to TV this fall 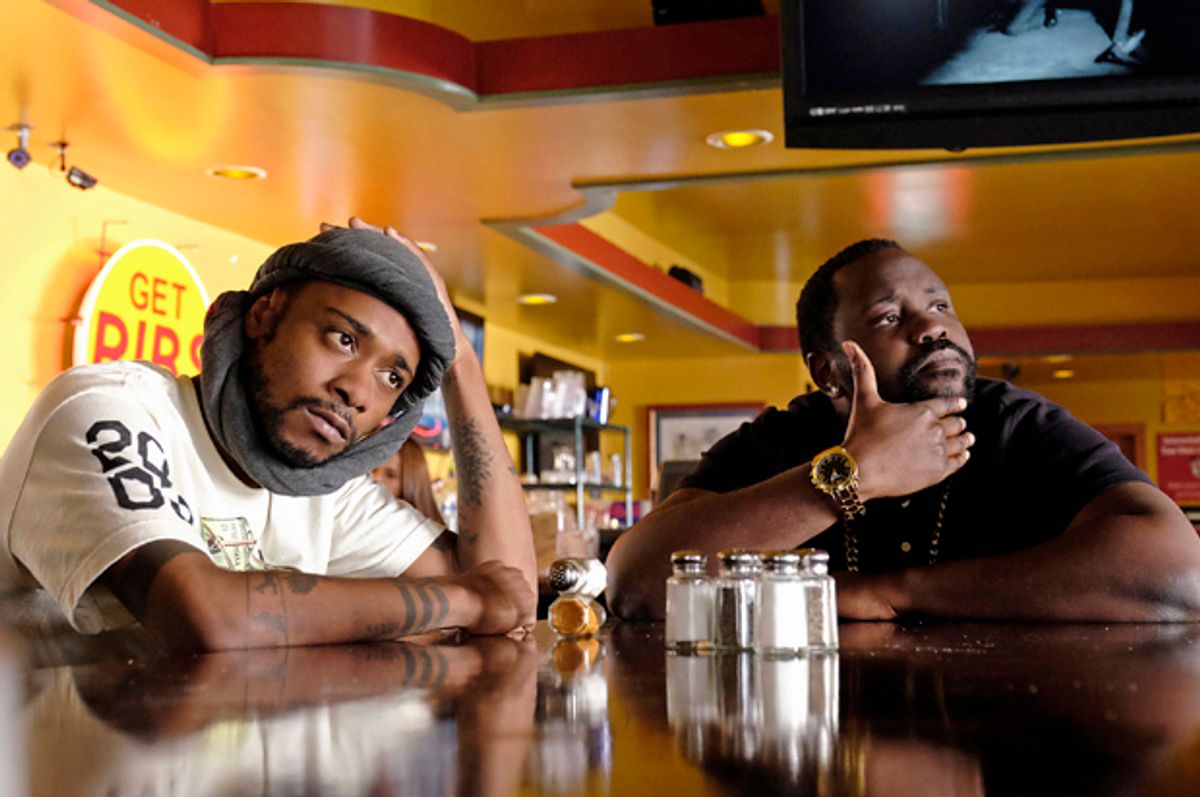 If the future of the entertainment industry belongs to multi-hyphenates, Donald Glover is in a strong position to run things. His rise in Hollywood began in the writers room of "30 Rock" before he secured a role in front of the camera with another NBC series, "Community." While that show's viewers were falling in love with "Community's" boyish Troy, Glover was also building a stand-up comedy career and producing hip-hop music under the moniker Childish Gambino.

His new show for FX, "Atlanta," (premiering on September 6) represents the culmination of all these experiences, stylistically and concretely. Glover created the series, and serves as the show's executive producer, writer, director, executive music producer and its star.

But if you're expecting a clone of "Empire," look elsewhere. "Atlanta" depicts what it's like to struggle in a big city through the eyes of Glover's Earn Marks. Earn is an underemployed single father who has dreams of discovering and managing the next great rapper, which could be his own cousin Alfred "Paper Boi" Miles (Brian Tyree Henry).

"Atlanta" challenges the audience on a number of levels. It's a half-hour series that would rather capture reality than aim for laughs, featuring lead characters that the dominant culture has been programmed to fear. Alfred is an artist who pays the bills by selling drugs. Earn is a well-meaning guy but is also, quite clearly, a loser. The language is unfiltered and, for at least the first few episodes, FX doesn't bleep out any of it. It's raucous and fresh, and one of the best new shows coming to TV this fall.

Salon sat down with Glover and Henry, as well as their co-stars Lakeith Stanfield, who portrays Darius, and Zazie Beetz, who plays Earn's on-again, off-again love interest Van, to discuss the show's unique tone. This interview has been lightly edited for length and clarity.

Here's what I found interesting about this series in a larger context of television. I know it is not expressly about hip-hop and hip-hop culture, but it is one of two new shows that incorporate hip-hop into its framework.  Through the decades, there have been tons of series about rock, or any kind of pop music, but this is one that specifically explores culture from outside of the industry, through the story of these friends.

Donald Glover: It's funny though, because I remember when "The Get Down" was coming out, I was a little worried. Even that is like a soft version. When we talked about this show, we were like, "We want to make it punk." Rap is still punk, because it's honest. The show is super honest about a bunch of shit.

Zazie Beetz: That is such a good way to put it, I never really thought of it like that.

Glover: I just wanted to do something punk, and I feel like the show is punk. That is why we are able to use 21 Savage, or Lil Yachty, because I think it speaks to that. I don't know, do you guys watch that [show] "Empire?"

Brian Tyree Henry: I do. I do. It is so interesting, because . . . we have made these huge empires from hip-hop. How do you do a show that, is it either just about hip-hop and the rise to fame? Or is it about these people, how they got there? With "Empire," it has a music mogul that came from this world.

Beetz: The music I feel like, and I do not even watch "Empire," but just based on what I have picked up, I feel like it is much more a specific character in the show, whereas in "Atlanta," it informs tone and environment, and informs feeling.

Lakeith Stanfield: That [character] in "Empire" is funny, the rapper?

Stanfield: I don't know if he is supposed to be, but that shit is hilarious.

There's a surreal element to the show, too, the kind of surreal the things that black folks have to do to turn a dime into a dollar. This series illustrates that concept in a really interesting way, but it also conveys this sense of confusion surrounding that idea.

Glover: The thesis behind the show was to make people feel black.  I know that is kind of impossible, but . . .  one thing me and my brother [Steve G. Glover] always talked about was, like, that white people don't understand how Gucci Mane can be super charismatic, and awesome, and funny, and also have killed a dude. They don't have anybody in their lives like that, so it feels weird. But that is just life, that is just how things are and have happened. . . . I think we kept trying to be like, "How do you make people feel that way?"

Let's talk about Standards and Practices. This is probably one of the only shows I have seen on basic cable where you all are dropping the F-bomb, regularly. Also, the juxtaposition of the N-word in the first episode was very clear and funny and made a point, and then the continuation of it is a natural part of conversation. Yet, I know that there are going to be people who are wondering about the raw language. What kinds of conversations did you have with FX about the show's dialogue?

Glover: It is funny, because that first episode we got Standards and Practices back, and the only time it was okay to say the N-word was when the white guy said it.

Glover: Yeah, because they were like, "Well, that is obviously necessary, because that is part of the story."

Henry: You broke The Matrix with that, yeah!

Glover: I know, I was like, "Yo, this is actually kind of brilliant." That is the thing, it is a part of the tone. I was actually okay with all of the bleeping, as long as the bleeps were in there, and they were distracting. FX was just like, "We do not like that, because it does distract." I am fine with the bleeps, because it lets people know. It is kind of like when I bought an Eminem album, and there is a part in there where he talks about Columbine, and . . . they just take it out.

Beetz: Oh my God, Nelly is like that too. There is like a 30-second part and the song is just empty.

Glover: Yeah, and so you are just sitting there as a kid like, "There is some real shit that happened right there —"

Henry: And you're going to find it, too!

Glover:  —  yeah, you are looking for it. . . . I realized we are not fighting the audience, we are really fighting the internet. All my favorite shit is on the internet really, because it is real shit. So I was like, "If I'm going to do something that is going to be cool, it has got to compete with the internet," which means we cannot be afraid of how people talk. That is so silly.

Zazie, let's discuss your character for a moment, and her interesting partnership with [Glover's character] Earn. There's this great, defining moment where Van says, "Are you making me into an angry black woman? Don't do that."

Beetz: Yeah . . . the first thing that was given about Van is all circumstantial, that she has a child, and she is struggling, and their relationship is, whatever. Then Alexa [Fogel, the show's casting director] was like, "She is not an angry black woman." That was really important, and I feel like that informs so much of their relationship and who she is. It was something that I really appreciated.

Glover: That was a big thing with FX, they kept being like, "We don't want there to be an 'angry black woman.'" I am like, "Look, I got a mom and I watch TV — I don't want her to be that either." But I am also like, black women get mad, and they should be.

But we're not allowed to get mad. Didn't you get the memo?

Henry: Because then it is also like, "Oh, she is in a place of power, and god forbid if a black woman has power." Van is one of my favorite characters in the show, because I was like, "Check his ass. You are right; check his ass."

Glover: That is the thing with her character, it was always really important that you just understand why she puts up with him. There is a bunch of shit that Earn does later on in the season where I remember girls on set were just like, "Boy, you are getting kind of risky with this shit." I am like, "Yeah, but you know that dude, and then you also kind of understand who he is." Not saying it is right or wrong, you just kind of understand who he is. That makes people connect more.

Stanfield: Isn't that kind of what makes it real? People are not just born, they do not just come out a certain way, and then you see them and it is like, "Boom, that's it." There is a story behind everything and everyone, and the reason why you have come to this specific place. If I take a black dude, or any kind of dude, and I make him a gangster, he has history and fam with different experiences that led him to that place. He was not just born gangster, you know I mean? There was something that informed it.

Henry: We cannot do much about how people perceive us regardless, and that is what I like about Alfred. Just because I wear a gold chain does not mean that I'm not educated, or that I do not care about my family . . . . I don't want to have to defend myself all the time on how I walk in this world. It is just how I walk in this world. You walk with me or you walk the other way, but I should not have to do that. That is what I feel like Atlanta, that is why I love the show being called "Atlanta," because there is no one true way to be in Atlanta at all.