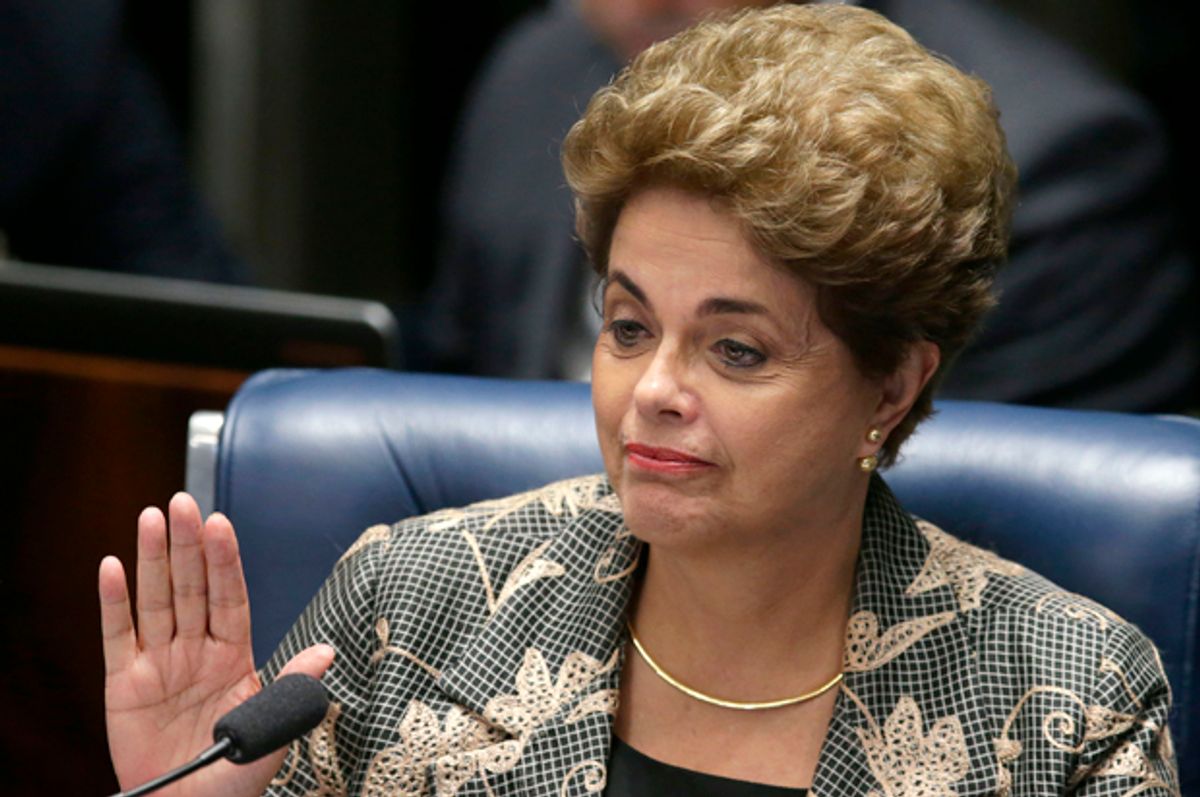 Brazil's left-wing president, Dilma Rousseff, has officially been impeached, in what critics are calling a "coup" and an attack on democracy.

The new right-wing president who will replace her until 2018 was not elected and is unable to run in the next election because he was found guilty of violating campaign-finance limits.

Members of Brazil's Senate voted 61 to 20 on Wednesday to convict Rousseff of breaking budget laws. They accused Rousseff of corruption for manipulating government accounts in order to hide a budget shortfall. She has pointed out that previous governments did exactly the same thing.

Meanwhile, the majority of the lawmakers who impeached Rousseff face their own investigations for often extreme forms of corruption. Agence France‑Presse has referred to Brazil's congress as a "den of corruption."

According to corruption watchdog Transparencia Brasil, 59 percent of the 81 Senate members who voted on Rousseff's impeachment have been convicted or investigated for crimes of their own. The lower house, which voted to impeach Rousseff in April, is equally corrupt.

Charges against the Brazilian lawmakers who impeached Rousseff include embezzlement, vote buying and even murder, AFP noted.

Salon reached out to Pulitzer Prize-winning journalist Glenn Greenwald, who lives in Brazil and has been extensively reporting on the issue for months.

"It's both sad and infuriating to watch a young, vibrant democracy abandon the fundamental principle — the people who decide who leads them — and install a right-wing faction that has been repeatedly rejected by voters, and which is both unelected and unelectable," he said, responding to the impeachment.

"What just happened in Brazil is a warning to people throughout the democratic world about the ability of media barons and oligarchs to override democratic elections at will in order to impose a self-serving political agenda that they know has never been, and could never be, democratically ratified," Greenwald added.

Michel Temer, who served as Brazil's interim president when Rousseff was suspended from the government in May, will remain as the unelected president until 2018, at which point he will be ineligible to run for election.

A construction executive has testified that Temer received a $300,000 bribe, although he denies this. He is by no means the only one in his new government who faces serious corruption allegations.

As soon as Rousseff was suspended, Temer's interim government was engulfed by a series of corruption scandals. In May, as Salon previously reported, two of the members of Brazil's new cabinet, including the anticorruption minister, resigned in just two weeks. Leaked recordings proved they were impeaching the elected president on trumped-up, non-impeachable offenses in order to prevent her from investigating the actual corruption they are involved in.

Rousseff's government had been carrying out an investigation known as Operation Car Wash, looking into widespread bribery at the state-controlled oil company Petrobras. Many of the members of Temer's government are involved in this corruption scandal.

The United States, which has defended the corrupt impeachment process against Rousseff, characterizing it as democratic and constitutional, announced after her impeachment on Wednesday that it will maintain strong relations with Brazil's new unelected government.

Rousseff herself has slammed the impeachment process as a "coup." She has compared her impeachment to her imprisonment by the former U.S.-backed Brazilian dictatorship.

Former presidential candidate and Vermont Senator Bernie Sanders released a statement this month "calling on the United States to take a definitive stand against efforts to remove Brazilian President Dilma Rousseff from office." He wrote, "To many Brazilians and observers the controversial impeachment process more closely resembles a coup d’état."

Other governments in the region condemned the impeachment on Wednesday. Ecuador and Venezuela withdrew their ambassadors from Brazil in protest. Venezuelan President Nicolás Maduro said his government condemned the "right-wing oligarch's coup." Ecuadoran President Rafeal Correa called it an act of "betrayal/treason" that "reminds us of the darkest hours of our America."

Bolivian President Evo Morales slammed what he called the "parliamentary coup against Brazilian democracy" and said he will withdraw his ambassador. Cuba also published a statement, blasting the move as a "parliamentary coup" meant at reversing the Workers' Party's leftist policies. Pan-Latin American news outlet TeleSUR, which is funded by these countries, has long referred to the impeachment as a "coup."

When Rousseff was ousted from the government in May, she was not charged with a crime. Her use of budget maneuvers is a non-impeachable offense and is common practice for governments.

In May, renowned scholar Noam Chomsky called the impeachment process against Rousseff “a kind of soft coup.” He stressed that Rousseff is “the one leading politician who hasn’t stolen to enrich herself, who’s being impeached by a gang of thieves, who have done so.”

Chomsky accused members of the opposition of "exploiting an economic recession" and using the impeachment in order to topple the Workers’ Party government because they were unable to beat it in an election.

The left-wing Workers' Party had been in power for 13 years. The right-wing opposition lost the past four elections but has now taken control of the government.

Senator Aecio Neves, the leader of the opposition and former presidential candidate from the centrist, but right-leaning Brazilian Social Democracy Party, lost the 2014 election to Rousseff by 3.5 million votes. He is under investigation for bribery, and his family runs secret bank accounts in Liechtenstein.

Longtime Senate president Renan Calheiros has likewise been accused of accepting millions of dollars' worth of bribes. He has also been accused of tax evasion and having a lobbyist pay child support for a child he had in an extramarital affair.

For months protesters have been holding demonstrations calling the ouster a "coup" and demanding that Temer step down. Other politicians, such as Brazilian Sen. Vanessa Grazziotin, have joined in condemning the impeachment as a "coup."

Immediately after assuming the role of interim president, Michel Temer replaced Rousseff's diverse, progressive cabinet with right-wing, all-white, all-male members. This marks the first time since 1979 that no women are serving in Brazil’s presidential cabinet.

Rousseff condemned the new cabinet, pointing out that just over half of Brazilians identify as being of African descent. She sat down for an interview with Greenwald in May, in which she argued the "interim and illegitimate government will be very conservative in every aspect." Rousseff emphasized that “not having any women or black people in the government shows [a] certain lack of care for the country you are governing.”

Temer has made it clear that he wants to pursue a right-wing neoliberal agenda, privatizing state assets, gutting government programs and cutting social services.

The New York Times also noted that Temer chose "a soybean tycoon who has deforested large tracts of the Amazon rain forest to be his agriculture minister."

Brazil's media has been incredibly harsh on Rousseff. Most Brazilian media outlets are controlled by right-wing oligarchs. NPR reported in May that there had been “a lot of fake news” circulating in the country. In the days leading up to the lower house’s vote to impeach Rouseff, 60 percent of the most-shared articles on Facebook were false, according to a University of São Paulo study.

The U.S., which recently backed a military coup in Honduras, largely remained silent while the undemocratic process unfolded in Brazil. The State Department persistently refused to answer reporters' questions.