The GOP's war with itself: Rumors spread of a brewing coup against Paul Ryan — but that's only the beginning

Rumors of an anti-Ryan coup roil the Beltway, but the real story is a long war between moderates and the far right 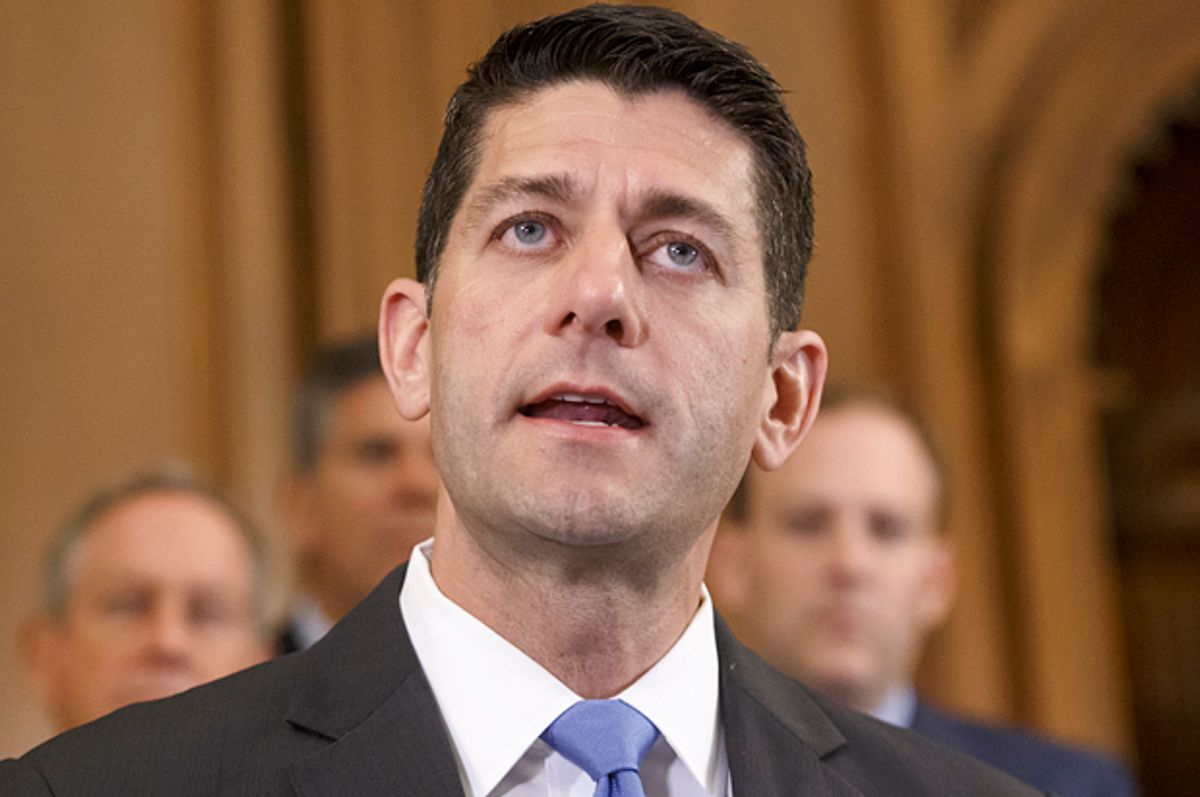 The same day that The Huffington Post reported that conservatives in the House of Representatives might attempt a January coup to oust Paul Ryan from his job as speaker, Ryan’s predecessor John Boehner posted this video to his YouTube channel. The 7-second clip shows Boehner, casually dressed in shorts and a pink golf shirt, seated behind the wheel of what might be an RV. The camera pans to the view out the front window: an empty highway unrolling towards a distant horizon. The RV’s destination may be unknown, but the optimism and freedom inherent in the vision is quintessentially American, as if Boehner were re-creating a scene from Jack Kerouac. Or at least from "About Schmidt."

In truth, the video is a bit deceptive. The RV is actually “Freedom One,” a bus that Boehner owns and has driven cross-country every summer for years to meet with and campaign for Republican representatives across America. This year is no different. Despite his semi-forced retirement last fall and the occasional glimpses of relaxation that he has released since, the former speaker is still out there being a good Republican functionary.

But the contrast with his replacement could not have been more obvious. While Boehner is out enjoying life, Paul Ryan is still stuck reading anonymous quotes from hard-right members of his own caucus about how terrible he is for not giving them everything they want and how that might result in his defenestration when the new Congress is gaveled in next January.

The question of whether Ryan could coexist with the hard right, mostly represented by the 40 or so members of the House Freedom Caucus, has dogged the GOP since the Wisconsin congressman’s name was first brought up as Boehner’s replacement a year ago. Considering the way the angry GOP base has cowed most of the party's elected officials into submission, as well as Ryan’s persona (which is more eager-beaver policy wonk than hard-edged political operator), the best-case scenario was always an uneasy détente between the speaker and the caucus.

For the most part, that is exactly what's happened. The right wing has made moving significant legislation through the House pretty much impossible. Ryan can shrug, score some points with the rest of the party by deflecting the blame for gridlock onto President Barack Obama, pretend to publicly agonize over his endorsement of Donald Trump and then retreat to bowhunting with his kids or rereading “Atlas Shrugged” or whatever it is he does with his spare time. Meanwhile, urgent issues that the American public might want their legislators to solve remain unaddressed until they become flat-out emergencies. (See the Zika virus, climate change, et al.)

Those members of Congress who spoke anonymously to The Huffington Post acknowledge that removing Ryan as speaker remains a far-fetched idea. Which means they are likely posturing in order to force some changes to the rules package governing House business that the chamber adopts at the beginning of every new session. The theory is if the Freedom Caucus can scare Ryan into thinking he doesn’t have the votes from his party to re-elect him as speaker, he’ll agree to some rule changes that the hard right wants. Among other ideas floated, the caucus might like additional spots on committees, more freedom and power to operate subcommittees and stack their staffs with hard-line ideological allies.

In that sense, these latest rumblings mean we should look at talk of a coup as the latest chapter in the ongoing power struggle between the far right and the more moderate — or at least temperamentally moderate — members of the Republican House caucus. This power struggle has been going on for years but become particularly acute in the Obama era, as the GOP in general has grown more and more intransigent.

This struggle won’t get resolved in January. But its evolution depends on how large the GOP margin is in the House after November’s elections and how badly Paul Ryan wants to remain speaker. Assuming that Hillary Clinton is the incoming president and that Ryan wants to stick out the speakership for a few years in the hope that he’ll get a Republican president in 2020 who will sign the conservative legislation that he has spent his career dreaming about (slashing entitlements, cutting taxes on the wealthy, shredding the social safety net),  he’ll likely cut a deal with the Freedom Caucus.

Thus the hard-core right-wingers will increase their power in the next House, which means the investigations of a Clinton administration will be even nuttier and more far out than they already are, if that’s possible. It’s not bad enough that even the moderate Republicans are already plotting to grind all legislative work to a standstill under a President Clinton. At the same time, Ryan might be giving the nuttiest of the nuts more power.

Every day, the current speaker makes his predecessor look like the smarter one.