You want a second opinion, you got it: "Others call it 'good cholesterol,' but I call it fabulous" 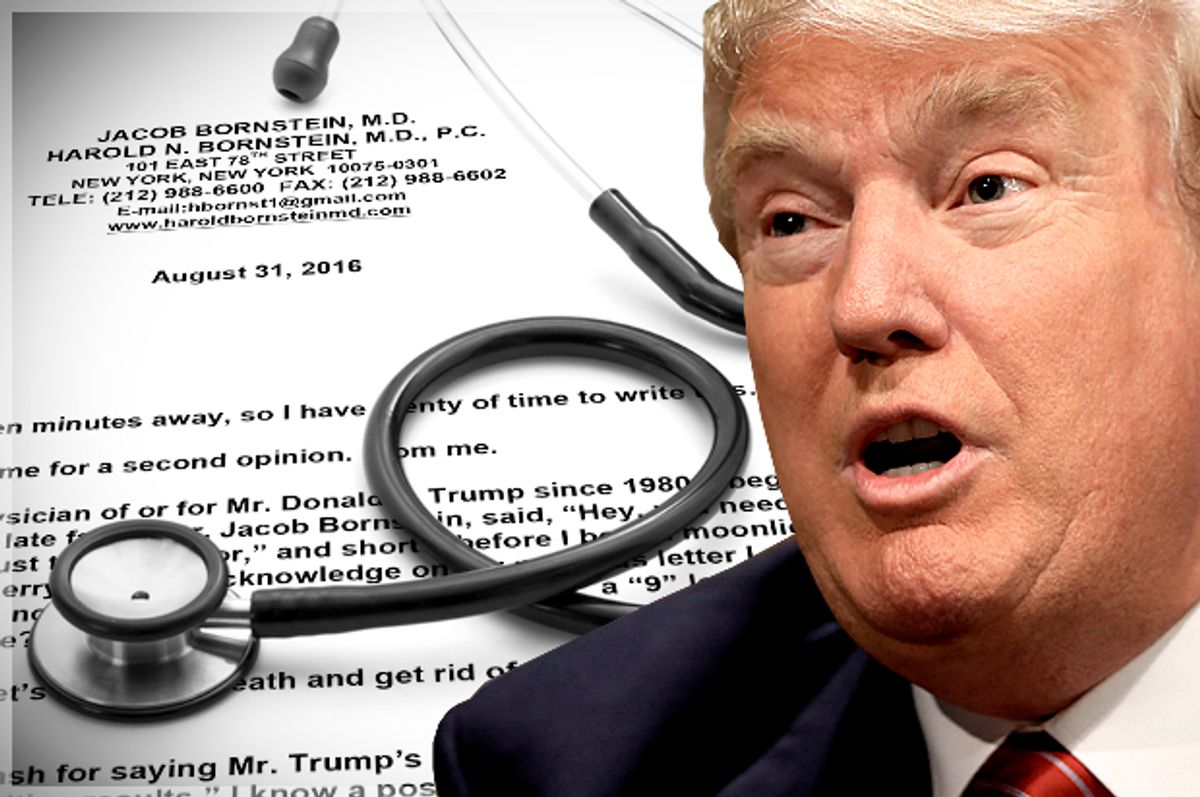 (The UberX guy says he’s ten minutes away, so I have plenty of time to write this.)

Hello, again. I see you’ve come for a second opinion. From me.

I have been the personal physician of or for Mr. Donald J. Trump since 1980. I began treating him shortly after my late father, Dr. Jacob Bornstein, said, “Hey, you need to get some supermodel tail. I got just the facilitator,” and shortly before I began moonlighting as stunt double/food tester for Jerry Garcia. I acknowledge on my previous letter I said I have been seeing him for 39 years, not 36, but have you ever noticed how a “9” looks like a “6” laying on an examination table?

Before we get to the results, let’s hold our breath and get rid of the hiccups in the last letter.

I know I got a lot of blowbacklash for saying Mr. Trump’s last complete medical examination showed “only positive results.” I know a positive result is bad. You don’t think I know that? You don’t think I didn’t see that episode of "Seinfeld"  when they tell George the test results for that white thing on his mouth are “negative” and he freaks out and then they tell him negative is good and then he calms down? You realize that when you criticize my knowledge of technical medical terms and what-not (and especially what-not), you are not just criticizing me, you are gainsaying the entire faculty of Tufts Medical School, where I successfully skated through four years, and demeaning my late father, Dr. Jacob Bornstein, who had the guts to take me on even though my mother (also named Jacob) kept saying, “What are you running, an employment agency?”

Apparently, some of my credentials have been questioned. I gather I’m not on the gastroenterology staff at Lenox Hill Hospital. Hey, their loss. I still have admitting privileges at Lenox Hill, but have you been there lately? They keep the place so dry (I guess to prevent infection. That’s their “spin”), my skin goes from luminous to komodo dragon just making my rounds. You know, if I made rounds. Am I right, ladies? Seriously, there is not enough Aquafor in the world. Bad!

And – bulletin! – I haven’t been a fellow at the American College of Gastroenterology since 1995. Okay, busted. Slipped my mind. Truth by told, I stopped paying my dues to ACGI when they lost their corporate rate at Hyatt. I called it the “Hyatt Hernia.” Got a big chuckle at the meeting. Ask anyone. Ask Lenny. He’ll remember.

PSA: 0.15 (I’m a GI guy. Until my nurse explained to me PSA was a prostate thing and not a public service announcement, I was a tad confused. Now, I’m blown away)

Total Cholesterol: 212 (It was actually 187, but Mr. Trump specifically requested a Manhattan number)

HDL: 78. (Others call it “good cholesterol,” but I call it fabulous)

LDL: 0 (That’s right, Jackson. Zero. I was shocked, too. Really, the man should be on display somewhere. How about 1600 Pennsylvania Avenue?)

Glucose: 83 mg/dl (Zack, the urologist across the hall, told me this was astonishingly excellent. His words, not mine.)

Sodium: 152 mEq/L (Zack says this could be lower. What does this piss jockey know? A guy can’t have a Happy Meal once in a while? What is this, Russia?)

EKG: N/A (What are you, a cop? Look, you know what happens when you rip off those electrode pads? Eeee-yow! We tabled the EKG for two reasons: 1) Mr. Trump had some plans for later the night and didn’t to have to comb over his chest hair. 2) I’d have to pay Zack $50 to read the results to me.)

White Blood Cell count: 49-50 million, depending on turnout…. (Come on, I can’t make a joke? Ask Giuliani. He’ll tell you how funny I am. Better yet, google “Howard Bornstein + hilarious” and get back to me. Meanwhile, it’s 10.5, I think. Which is banging.)

Let me reiterate, in the strongest possible physicianal verbiage, Mr. Trump has never suffered from cancer or had a hip, knee or shoulder replacement. However, full disclosure, years ago, in Atlantic City, he did have Steve Wynn removed from his ass. That was, as I understand it, non-surgical, out of network and out of pocket. To date, Mr. Trump’s only surgery was an appendectomy at the age of ten. Turns out his appendix was fine, his father just wanted the space. Although 70, the man still has the abdominal wall of a 16-year-old. And let me tell you something else. He paid for that wall. Not some Mexican.

Okay, we cool? The only thing I’m changing about my previous summation is “if” to “when.” WHEN elected, Mr. Trump, I can state unequivocally and unequivocably, will be the healthiest individual ever to serve as President. Evah. I’m positive. Of course, that may be the prescription weed talking.